Swimming with Dolphins... and other stories.

My humblest and sincerest apologies to my loyal readers - I really ought to have done a deal more over the last month with this blog spot.  It's not as if I can't think of anything to write about.  Perhaps I could partially excuse myself by mentioning that the health has been less than top-notch lately (of which more anon, for your amusement), or that my other on-line activity - Gameknot Chess - has occupied rather more time lately than heretofore.  Certainly the actual Battle of Jasper Roads ought to have been fought by now... 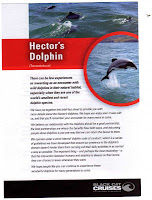 About a month ago, Karen and I took a day trip to Akaroa for a 'Swimming with Dolphins' excursion.  Akaroa is a small town - originally a French settlement, quite noticably so - deep within the harbour of the same name on the other side of Banks Peninsula from Christchurch..  It's about a ninety minute drive, half of it over hill country - the Peninsula being active volcanoes a couple of million years back - and, as it happened, through thickish fog, there and back.  The excursion itself took us out of the harbour (it's very like a fjord, so far does it reach inland) to maybe a kilometre off shore.


I took a few pictures of the boat trip out, but here's where for me the thing went a little bit turnip shaped.  I hadn't been feeling top hole since we left home, but wasn't too bad.  OK when the boat was in motion, sure. But when the boat hove to so the swimmers could swim, the monstrous two-foot swell was enough to upset my stomach and I ended up heaving the lunch I hadn't had over the side.  Damned painful, too.  So much for the pictures and movies I wanted to take.  The photo with Karen and friend was taken by the boat operators.


Not confident of my fitness and exercising over-caution, I had decided already not to go into the water myself.  Poor show, I agree, and a decision I regret.  Next time, maybe.  But there was an upside: I probably got to see more of the dolphins from the boat than the others from the water.  These were Hector's Dolphins, the smallest of the dolphin species.  They seemed very interested in playing with the boat whilst it was in motion, and when swimmers (floaters, really) got in the water (singly - but I don't think that was planned), they were quite happy to surge around and check them out.  When Karen got in there were already three or four about, but what struck me was seeing another three rapidly approaching in a kind of vee, leaping half out of the water as they came, heading straight for her.  Karen being what you'd call small, we think the dolphins took a particular liking for her.  When on several occasions one or other of the dolphins leapt clear of the water close by her, we were solemnly assured that, though not unknown, that sort of thing didn't happen very often.  A bit of a bonus, apparently.


If ever you're in this part of the world, I highly recommend taking the trip - it's about 3 or 4 hours I think, the boat ride.  The scenery is great, and up close the dolphins are something to see.  And the operation is slick,  well thought out, yet engaging.  The ocean on the east coast of New Zealand is not what you's call warm, so they outfit you with wetsuits and boots.  They also give you snorkels, but I gather these are more by way of toys so you can make noises to the delictation of the sea life.  Splashing is not recommended - the dolphins take it as a warning to keep away.  Touching the dolphins is a strict no-no - they are easily injured, I gather.   In the wetsuits you float quite easily (Karen tells me), the only slight difficulty being to keep your feet down.


Once under way again, the stomach settled down.  We got to see some of the spectacular shore line up close, and the dolphins escorted us back to the harbour entrance.  Great day... sort of.

Some time ago, a friend (thanks Brian) donated to the Archduke Piccolo cause an unmade Airfix model of the Golden Hind.  Having already acquired but not built the Mayflower, and my Heller model of La Couronne left by the earthquakes a dismasted hulk, I thought it high time in the last week or so to amend matters.  Even unpainted, I find the little Mayflower and Golden Hind vessels surprisingly pretty - seen from certain angles, at any rate. 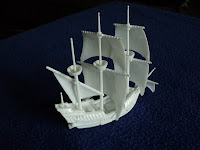 I find that the model looks better if the spars are set at an angle, as though the vessel were broad reaching - the wind off a stern quarter - rather than running before a wind more or less directly astern.  The angle at which the spars are set looks less pronounced in the picture to the right.

The Mayflower is a much smaller vessel.  Although the original carried the Pilgrim Fathers to America this particular craft will represent variously the merchant marines of Altmark-Uberheim or Ursaminor, or a ship-rigged sloop in one or other service.  I have yet to determine in whose service the Golden Hind will serve, nor under what name.  Silver Stag comes to mind... 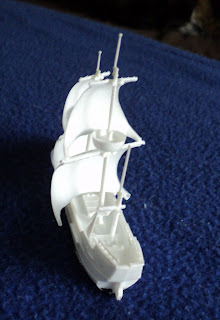 La Couronne was shipwrecked by successive earthquakes in Christchurch.  The spars all came away, except for the sprit top (?), and main topmast snapped in two as well.  I could probably cement them all back together, but I rather fear for the robustness of the finished model after that.  An alternative idea is to sheath the existing masts in plastic tubing - the fore, main and mizzen masts in ball-pen reservoir, and the top masts in the thinner cotton bud tubing.
I have bored out the places where the masts snapped off, and I'll probably widen the holes to accept the plastic tubing.  Although I didn't make this provision for the other two vessels, the tubing will permit removal of masts by way of battle damage.

The sapient reader will have observed all these are waterline models, but all three are moulded with the full hull, to be mounted on display stands.   I think one of the ships actually had the hull glued together - the only start made upon it.  The judicious application of craft knife and scissors dealt with that.  That the cuts were crude - haggled, rather - doesn't matter, as once based they become invisible.  The basing for La Couronne, by the way, is coloured foil from a chocolate or Easter egg confection.  I wish I had more...

2.Napoleonics.
Some painting to do here...


3. Jono's World.
Although Jono himself has gone off to do other things, I'm still playing with his creation and building up sort of 'Army Men' type forces.  The Kiivar are just about done, but the Raesharn really need some actual infantry, and other personnel.  Recently I discovered these fascinating artifacts in a local bookshop that has a small toy section.

There were more of these, in bright colours, which, if they don't move, I might acquire for the Kiivar Air Force.  I bought the fighter several months ago, and then found several weeks later that although they had moved around the shop, they hadn't moved out.  Naturally and or course the biplane was commissioned into service.

My one caveat is that the decals too obviously identify the aircraft as 'American'.  I would have preferred something less unambiguous, such as no such marking at all.  While I might have added a 'Raesharn' decal, I don't feel like removing or painting over this one.  What I might end up doing is modifying the central star in some way.
I do like the way the camo of the aircraft and tanks resemble each other.

4. Milestones.
I had intended to celebrate these with somewhat more eclat several weeks ago, having acquired 80+ followers, and reached over 50,000 'hits'.  Not as quickly as some, but pleasing all the same.

A warm welcome to Peter Douglas my 82nd follower.  I'm sorry I have not been around to do so earlier.