Having some brass cannon and the wheels from Airfix Ancient Britons chariotry, I bethought myself to construct a company of heavy artillery for sieges and/or city defence. Rather than duplicate for each army such a company that would seldom be required, this troop is intended to be generic. 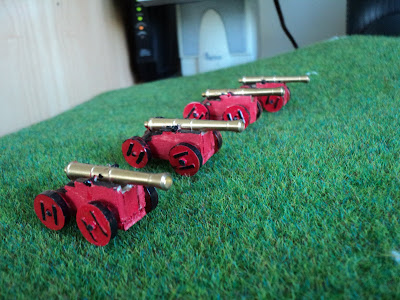 As I do have a zillion Airfix RHA figures, I can at least create the train personnel for each nation! At that, many of them will no doubt make fine pioneers as well... 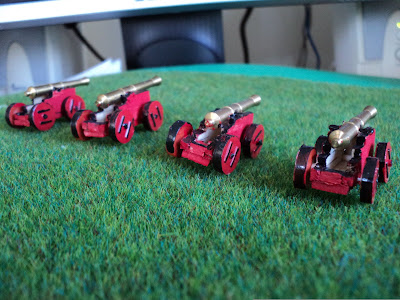 At last! The infantry of the Electorate of Altmark-Uberheim is complete - or very nearly so. Way back in February, I showed pics of the early stages of this project.

Progress was steay until june, but then, partly owing to a discouraging cock-up, partly through loss of motivation (and other things taking up much of my time), the thing hung fire until just over a week ago. And now, at last, we can unveil the foot troops ready at the behest of Kurfurst Draco zu Spitzensparken to go forth conquering and to conquer. Well, try, anyway. 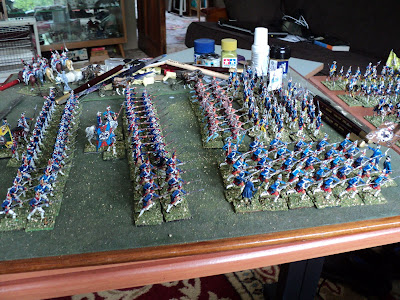 Lined up on part of my little work-table are:
To the right and nearest camera, the 49th (Sers) Fusiliers;
Beyond, 15th (Garde) lead a battalion of Pandours in the service of Altmark-Uberheim;
At centre picture, we look down the line of 22nd (Prinz Moritz von Anhalt) Infantry; and behind them is the 25th (Ramin) Infantry Regiment. 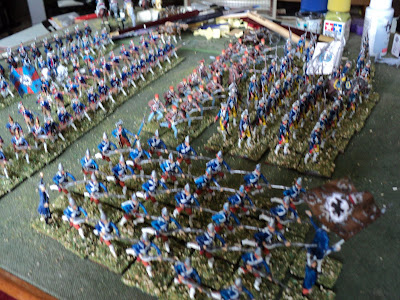 The other half of the table is covered almost completely by the other 5 battalions of the Electoral Army: 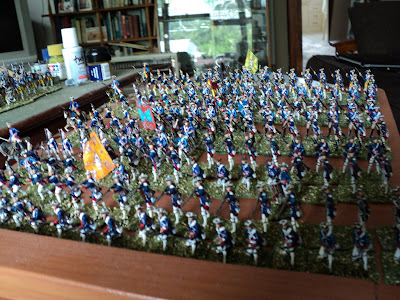 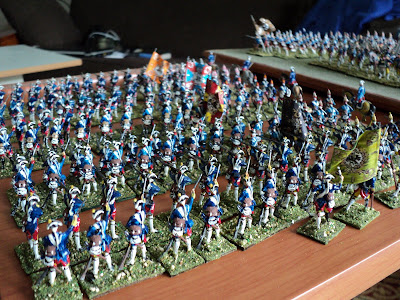 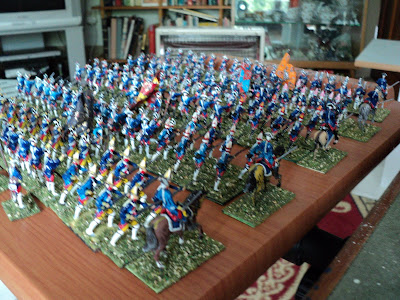 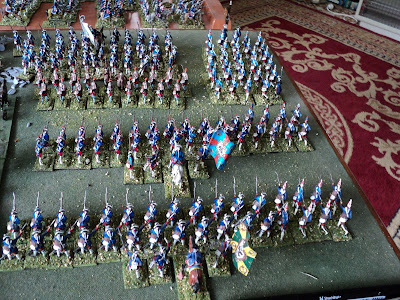 For the last few weeks, a bunch of Christchurch wargamers, sinking their identities into various well-known personages of the Peninsular war, have been engaged in a struggle for power over the Iberian Peninsula. The last three posts have described some of the action in that campaign.

Of course, each character has a number of other non-players (NPCs) under command. Messena commands the Armee du Nord, broadly speaking active in Old Castile, Estremadura, the area around Madrid, and Portugal. Under Massena's command are Marshal Ney (VI Corps), General Reille (II Corps - soon to be taken over by Marshal Bessieres) and Genl Junot (VIII Corps). One has the sense of being spread rather thin!

This is partly due to the scaling down of the armies. Any any given time the French Empire had committed something like 250,000 to 300,000 to this theatre. We are making do with forces representing maybe a fifth or a quarter of those numbers. Clearly the whole Peninsula has been scaled down, as has the time scale (though each Campaign move is called a week).

Much of the early action has taken place in Marshal Soult's extended bailiwick: Zaragoza surrendered; Genl Suchet successfully stormed Barcelona; the confused and scrambling combat at Castalla was followed up by the pursuing French successfully forcing a river crossing at Xativa. 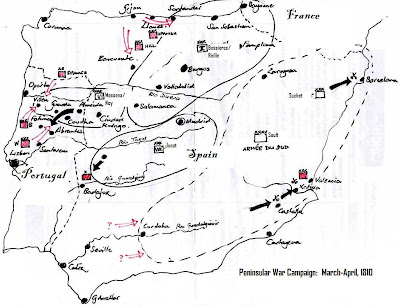 There has been little fighting in the northwest, though that seems likely shortly to change. Gathering under VI Corps command as large a force as he dared - in view of the vulnerability of his lines of communication and the need for garrisons to hold down the countryside - Massena undertook to carry out the orders that had been issued direct from Paris: take Portugal. Marching by way of Almeida, Guarda and Covilha, Massena penetrated as far as Abrantes, whereat his scouts reported the presence of large Anglo-Portuguese forces - perhaps 15,000 troops, more than half of whom were British - upon the hills on the far bank of the Tevo River.

With a force little more than what the enemy seemed able to assemble, Massena declined to attack, but offered battle where he stood. The Iron Duke mysteriously drew off most of his force south to Santarem, but Messena refused to be drawn. A quick strike by Marshal Ney towards Fatima yielded no results; and at the end of March Massena began gradually to pull back northwards.

There were two reasons for this. Faced by a strong enemy force whilst isolated at the end of an exiguous line of communication was not a situation that Messena felt could be long endured (yes, I know: Massena did indeed endure such a situation during the winter of 1810-11, but I wasn't going to have with that!). Somehow a better opportunity needed to be sought. But equally compelling was news of an Anglo-Iberian landing somewhere near Gijon, on the Biscay coast. The reported numbers of Allied troops involved suggested this was no mere raid, but a serious effort to (re)conquer Old Castile. Could II Corps meet this threat? A worrying situation to be sure, yet those that knew him began to discern a faint gleam in the Marshal's eye. Dispatch riders with heavy escorts rode off in numbers with orders to the various commanders throughout Northern Spain. The game was afoot!

Meanwhile, General Junot has been conducting an offensive of his own in barren Estremadura. It has been a lonely journey - hardly a Spaniard has been encountered in the entire province, though there was rumour of enemy light cavalry moves south of the Rio Guardiana. At last, approaching Badajoz, VIII Corps has run into a small brigade strength Spanish corps that seems ready to defend a river crossing - a single bridge with nary a ford by which to bypass the defile. A small action seems imminent in that remote part of the world.

Action looks likely in northern Portugal as well. Forced to abandon Viseu, Massena is planning a strike in that direction in the hope of bringing on an action. It seems fairly clear to him that he can not much longer retain a foothold in Portugal, but, perhaps to avert Imperial wrath in Paris, he wishes at least to cross swords before moving back into Spain. Besides which, the Guarda crossroads is a fine point upon which to strike out at foes coming from different directions, whilst at the same time not an easy place to get past if the Allies want to carry the war into Spain. The strategic value of such a point is not lightly to be given up!

On the other hand, there remain those enemy troops in Old Castile that require attention...
Posted by Archduke Piccolo at 11:47 AM No comments: