Every so often, one finds, despite having plenty to write about, there sets in a disinclination to 'put pen to paper' - I suppose one should say now: 'put finger to keyboard'. Hence the three week hiatus, which, absent the imaginary shotgun I'm holding to my head, could easily extend to as many months.
Having recently accepted delivery of the latest Portable Wargame volume - The Portable Pike & Shot Wargame; I'm building a considerable library of Bob Cordery books! - I was most interested in it, I thought, for the 30YW and ECW game systems. As it turned out, the 'Sengoku Variant' (by Antoine Bourguilleau) caught my eye. Without wishing to embark upon a whole new project with a whole new collection of figures I had no storage room for, it occurred to me that I have a whole range of figures that I could use - the figures from the Shogun board game that has been sitting idly doing nothing for nigh on 20 years. All that was wanting was the mounted arm (represented by a dismounted Daimyo figure I have supposed).
So, I bought a box of Zvezda mounted samurai (I've long known them to be superb figures, but had resisted so far in getting any), and hope soon to acquire a couple more. Now, not wanting to wreck the board game by painting the figures, but also not happy with the thought of painting the mounted figures an overall colour, I  undercoated them black, dry-brushed overall with white, and painted red all the tassels and fringes I could find. I'll probably add some extra details here and there later on.

The first outing for the 'Sengoku Portable Wargame'  was a pickup action played with Paul 'Jacko' Jackson one evening just over 3 weeks ago. Clan Oda was in combat against an Ikko-Ikki insurgent army. Hideoshi Oda himself led a relief column to rescue an adherent's castle from attack.
Forces:
Clan Oda garrison:
Clan Oda relief column:
Totals: 12 units (including Daimyo) -> Activation = Int(3D6/2)* 32 Strength Points: Exhaustion @ -11SP; Rout @ -16SP.
Ikko-Ikki:
Totals: 19 units (including leader) ->
Activation = Int(4D6/2)* 50 Strength points: Exhaustion @ -17SP;
Rout @ -25SP. * Int(expression) = the integer part of of a given rational number. It is a way of expressing truncation, rather than rounding. For example Int([1+3+4+5]/2) = Int(13/2) = Int(6.5) = 6. The table was set up in the map, the board being from the Memoir '44 game set - very useful for battlefields it is! Paul was offered the choice of army; he surprised me by taking the Ikko-Ikki.
So it was that in the first year of Tomohito Emperor, the Ikko-Ikki of Etchu province essayed an assault upon Clan Oda, beginning with a attack upon an outlying adherent Matsu Diron's residence, Dajji Castle. Matsu Diron could count upon his personal retinue of foot samurai, some cannon, and his entourage of ashigaru spearmen and gunners, but one sight of the hordes descending upon his lands led him hastily to dispatch runners to call for help from the nearest Clan leader. For their part, Dajji was to be the Ikko-Ikki beginning of the total obliteration of the hated Samurai class and what they stood for, according to the ideology and aim of the insurgents. Well - maybe this little action could be a generating circumstance for a campaign! The tale is soon told. The Ikko-Ikki launched an immediate attack upon the Dajji walls, where they were met by a hail of shot from arquebus and cannon. As the attack lapped around the walls, the Samurai bodyguard came into action. Boldly daring, the defending ashigaru spearmen sortied into the open and into left flank of the attackers. 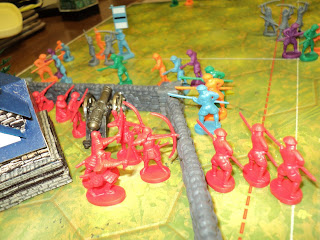 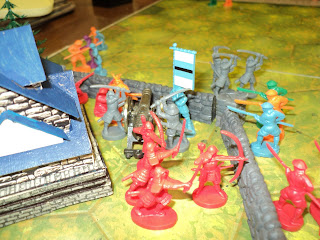 For long the assailants struggled to secure a lodgment over the walls. The defenders exacted a steep toll, but the heaviest attacks were pushed against the apparently weakest of them. But each time the attacks against the guns and gunners met a check or repulse, the latter followed up their success with shot. Yet for all their losses, nothing would dismay the Ikko-Ikki. At last overcoming the cannoneers, the insurgent Ronin swarmed into the defenders' positions. 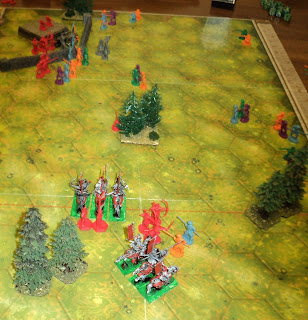 Meanwhile, the relieving column had become strung out along the road, the samurai and hand gunners having opened up a gap before the trailing spearmen. At that, the Diamyo permitted himself to be distracted by insurgent spearmen flanking the move towards the castle. Having got entangled in petty skirmishes, the samurai found it difficult to extricate themselves and resume the march.
That dilatoriness turned the action. Having incurred heavy losses storming into the castle, the Ikko-Ikki now began to exact a heavy vengeance. At one point the whole Samurai force had lost just 5 strength points against at least 12 Ikko-Ikki. The cannon lost, the isolated arquebusiers fell back into the castle. There the warrior monk leader, Ori Gami led the victorious ronin and spearmen in smashing their way into the stronghold. Outnumbered five to one, the defenders reeled out the back door. For their part the samurai defenders were still able to present a solid front. 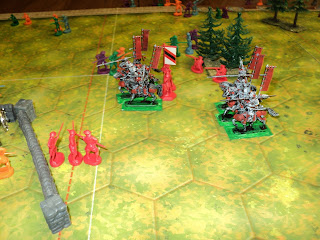 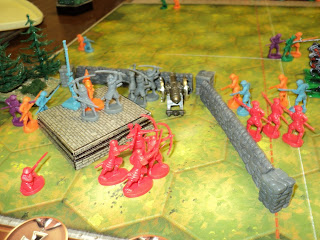 Having freed themselves from the attentions of the more distant ashigaru, the mounted samurai made rapid progress to the aid of the castle, somewhat protected on their right flank by ashigaru tepo in a small wood not far from the castle walls. Riding down a band of spearmen, they appeared on the brink of victory despite the momentary loss of the castle, as much of the garrison was still fighting in the grounds. At about this point, the Ikko-Ikki had lost 15SP - just two more would bring their attack to an end. Clan Oda had taken barely 50% losses so far. How a battle can turn! The main castle won, the triumphant assailants began hunting the Clan Oda defenders in the grounds. The arquebusier remnants they quickly dispatched, then surrounded the samurai, who refused to abandon their charge. Losses quickly mounted, as the garrison samurai were whittled away to nothing. In his hurry to bring help, pushing his way through swarms of ashigaru spearmen, Hideoshi Oda received an unlucky spear thrust that laid him low. In striving to finish off the insurgent army, Clan Oda had brought about its own discomfiture. Although the Clan continued to press on for a time, they too keenly felt the loss of their leader. Attacks became disjointed, the ashigaru spearmen were still somewhere down the road, all despaired of regaining the castle. Exhausted, Clan Oda gave up the battle. 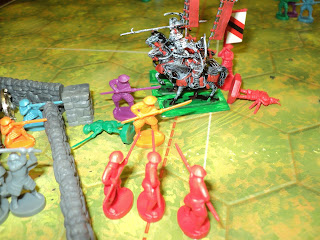 This was quite a turn up. Although the castle was lost only after the garrison had exacted a heavy toll, and well into the action a clear samurai victory seemed likely (6 or 7 SP lost against 15 SP), the massacre near its close quickly narrowed the margin, and it was Clan Oda that reached its exhaustion point first. So the castle was lost, and Clan Oda defeated. This was quite an interesting first outing for the rule set, with some 'thought points' emerging owing to its own particular game mechanics, in particular the unit activation system, and the 'missilery' ranges. A discussion of these I'll leave over for another time.
Posted by Archduke Piccolo at 3:07 PM 12 comments: