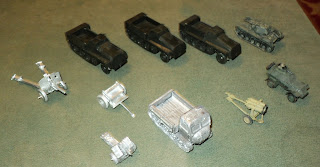 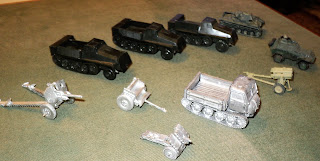 Most images of the Uhu carriage have the angled sides and roof mounting, but this picture seems to indicate alternate mountings are possible with the vehicles Mark sent me.    Definitely a doable project, I think.
Posted by Archduke Piccolo at 5:28 PM 7 comments:

Well, I'll tell you what: this project is proving a deal of harder work and searching than I originally thought.  I had what looked like a very good and detailed source for the Orders of Battle (OOB)- and discover I have reason to doubt its veracity.  On the other side of the coin, working out the SP values for the scale of game we're looking at is also being subjected to a review.

One who has been following my progress so far has obviously been down this same road before, and amassed a deal of knowledge (thanks Neil).  Against that I have a source that, owing to comprehensive and circumstantial detail seems persuasive.  For a wild moment I thought the OOB referred to a later time, but the presence of Savona Division (surrendered at Bardia, January 1942 and never rebuilt) and RECAM (disbanded not long after the Crusader Operation) indicated I wasindeed reading a November 1941 Orbat..

On the other hand, it would appear that the inclusion of the Semovente group is mistaken (552 and 553 Battalions).  I have two OOBs printed out, one that includes the assault guns, one without.  The latter I unearthed buried among other bits of paper.  Pity: I would have liked to include them.
...
Having said that, since I took the photos a couple of nights ago, I thought I'd post them here anyway, as a kind of 'first draft' of what Ariete division and XX (Mobile) Corps will look like.

The Order of battle of Ariete Division will henceforth be based upon this:

No: no armoured cars, no Semovente.  'Jacko': I hope you are not disappointed!

But the Corps Troops do have truck mounted 102mm AA/AT.

On a personal note, I have very likely another operation in train. For the last thirteen years the vision in my left eye has been badly impaired by cataracts.  And at last, in the last few weeks I have noticed a marked deterioration in the vision of my right eye.  Yep.  Cataracts.  Confirmed by a visit to the optometrist last Thursday.  I now have an appointment for a consultation at the St George's Eye Care on Monday, 1 October.


In a species of 'anti-celebration, Karen and I followed that evening's grocery buy with a feed at the 'Food Court' at the Eastgate shopping ... place.  This is what I got.  Mixed plate (lamb and chicken) with salad, chips (fries) and topped with BBQ sauce, sweet chili sauce, and yoghurt.

It was a bloody dam jolly good feed!

'Operational Art' - and other stories...

I have been fascinated by the World War Two operational level game developments by a number of gamers and game designers who began exploring such game systems for several decades now.  Names such as Bob Cordery, Tim Gow, Chris Kemp and Martin Rapier come to mind, each with their own signature stamp on the concepts.  One ought not perhaps overlook Neil Thomas's One-Hour Wargames, and perhaps I have rather neglected to investigate further into the Sam Mustafa Rommel game system.

I'm a newbie to this type of game, for years being an aficionado of the Command Decision systems.  But when a couple of years back I set out a CD game, it remained on the table for several weeks with just two or three moves played, and was then put away again.  It was just too much effort.   Since then I have played several Not Quite Mechanised (NQM)/ Hexblitz/ Megablitz games and found them a lot of fun.

BUT... I know it not what you'd call 'good form', but I do feel the need to adapt such systems to my own inventories.  Although I know of at least two collections in this town that are orders of magnitude larger than mine, I have over the years amasses a fair inventory of kit...

Of course I want to use it (it is also high time I organised it all).  It just wasn't happening with Command Decision, and the formerly popular Panzer Marsch! wasn't getting any traction lately, neither.

'Jacko' (Paul Jackson) and I have been much taken with the upscaled 'version' (insofar as it has any 'formal' existence) of  NQM, and have conducted some experiments along those lines.  We tried adapting the system to a hex grid game, using some Hexblitz mechanics, and we got a pretty exciting game out of it.

Continuing the saga, Bob Cordery has revisited his earlier Operational Art game system with a view to conducting an Operation Barbarossa campaign.  Exciting stuff.  Meanwhile, Jacko and I have been working on a game based upon the 1941 Western Desert relief of Tobruk, called Operation Crusader (18 November - 20 December, 1941.

So far I have been working on the Orders of Battle for the belligerents, and have come up with something that looks like this.  This is only the New Zealand Division and the Ariete Armoured, by way of sample ORBATS.
....

At the beginning of the Tobruk relief operation in Novemkber, 1941, the New Zealand Division
comprised nearly 20,000 officers and men, according to the Official History,  By this time, the average Russian Rifle Division could consider itself fortunate if it had as many as 5000.

Now, let's have a look at some of the opposition.

Total Strength = 19SP, 13 stands, Exhaustion point -7SP
Notes:
1.  I am counting 30 tanks or assault guns as 1 SP; 24 guns as 1 SP.  This is double the Cordery system, and I do admit is not altogether commensurate with the upscaling of the infantry.  This will require testing, but I have hopes it will work out..
2. Each line represents a unit.
3. The Bersagliere Regiment may include a command figure to which the SP marker is assigned.
If used, this will apply also to the NZ and other brigade groups.  4.  Multi-stand units may occupy two adjacent or 3 (hexagonal) or 4 (square) co-joined grid areas
5...Recon units:
My thinking is this, and owes something to the Chris Kemp game system.  It is intended as an aid to attack, can fight a little, but is really designed to improve attacking chances.  At the moment a units attacking a defensive one requires (in 'my' system) a 6 to hit an enemy in 'D' mode - defending or 'dug in'.  But suppose the enemy position were not reconnoitred ahead of time?   This should give the defenders the chance to get their licks in before the attacker can (so the attacker takes losses before rolling for its own attack).  This applies only to the first turn of the attack, subsequent turns will be held to have developed the enemy positions well enough for more effective attacks.  I am considering also bringing back the 5-5 and 6-6 hit requirement for the first round of an un-reconnoitred attack.
6.  MG, infantry gun, mortar and heavy weapons (HW) stands that are integral to infantry and cavalry units I am considering allowing distance combat out to 1 grid area, at 1SP per stand.  This will be allowed only if the unit as a whole has no enemy in an (orthogonally)  adjacent grid area.

As I don't have the Italian inventory, I'm hoping to take some pics of 'Jacko's' kit to show what the Ariete Division would look like.

A week or so ago my copy of Bob Cordery's latest, Gridded Naval Wargames: Naval Wargaming in the Age of Steam, Iron, and Steel, arrived by courier, just as I was sitting on a mild winter's day (Antipodean late July) at my garden table attempting to put together some metal German WW2 15cm howitzers I recently discovered in my inventory.  The glue wasn't 'taking' for some reason, so the long awaited volume was a welcome break from frustration.
I don't know how Bob shoehorns so much in so few pages - just 122, and yet there are ideas for six different war games - blockade running, battles between wood and iron, fleet actions and single ship duels, combined operations..  I makes for a great read, a fine source of ideas. plenty of meat and potatoes to chew on.  These little books make great bedside companions.
The final chapter, "Coastal Operations", proved the inspiration for knocking together a couple of shore guns, possibly a touch anachronistic for the American Civil War riverine setting of the pictures accompanying this article.  This pair have been made from plastic tube, buts of felt colouring pen, balsa wood and the plastic top of a herb or spice jar (pieces I collect for their myriad 'recycling' uses).
They are not perfect, by any stretch - pretty rough, withal - but they will do for my purposes.  Now, all that remains is to set up, carry out and report upon the Union attempt to capture or destroy the Confederate batteries of Island Number Nine.

Posted by Archduke Piccolo at 5:24 AM 17 comments: