As the great battles were about to begin north of Charleroi between the Armee du Nord and the Anglo-Prussian Armies of the Seventh Coalition, some distance to the east, smaller armies were also about to try conclusions.  Whilst mustering around the region to the west of Koblenz, the North German Federal Army Corps, commanded by General der Infanterie Graf Kleist von Nollendorf, began to receive rumours of a French force pushing up west of the Argonne Forest, apparently to insinuate itself between the main armies of Prinz Blucher and the Duke of Wellington, and possible communications with Prussia.  Ordered at once to intercept, although, owing to the shortage of horse and guns, his Army corps was less than ideally fitted for the rigours of a campaign, the able Graf Kleist was only too eager to set his command in motion.
The rumoured French 'force' was none other than the so-called 'Army of the Meuse', under command of Count Beaujolais, amounting to a small army corps of 14-15,000 officers and men.  They had been ordered to cover the network of fortified towns along the border facing the Ardennes forest, and if possible to menace the German east-west communications between Blucher and Kleist's 15,000-plus strong army.
In their haste to meet the enemy, both columns became rather strung out, Kleist marching in a westward direction, Beaujolais more or less northwards.  At last, at about mid-afternoon of 15 June, the brigade-sized advance guards met where the roadways converged at and near the town of Perwez au Pahaut.  It being very desirable to seize the place to secure the line of march, action was soon joined.
The forces were;


The action opened with the cavalry entering the battleground on move 1, and the rest of the respective advance guards arriving at any of the first 3 turns. This was determined by a dice roll. Which of the two roads they arrived on was also randomly chosen. Finally, I used my own dice method of determining who moves first in any 'bound' and the number of 'units' that may be ordered.
This turned out to be the 'order of march' - road and time of arrival

As the French light horse mounted the rise hard by the village of Noville, they could descry the leading Prussian units emerging from the roads east.  In their turn, the Hessian troops turned to face what appeared to be the menace from the south.  Hoping to catch the leading Hessian battalion as it deployed from the Chemin de la Montagne, 21st Chasseurs essayed a charge.  Dismayed by the  bold front presented by the Hessian infantry (both sides rolled 'six' for their combat outcomes), the horsemen veered off and returned hastily to their hilltop.
This attack had the effect of delaying the Hessian march, as they deployed in the plain north of Noville.  The Voltigeur companies entered Permez town uncontested, crossed the bridge and, from the woods on the far bank, set about peppering any Hessian horse foot or guns that came within their range.  A point about these skirmishers.  I made a slight departure from the rules for rifle-armed skirmishers, as these, specialists as they are, were armed with smoothbore muskets.  So I kept their shooting range to 3 grid areas only. They still got the benefit of mobility (3-grid area move whilst dispersed).
The artillery battery followed the Voltigeurs into the town, but as the pressure began to increase on the east side of the river, the Ist Battalion, 3rd Light Infantry, crossed the southern river bridge to join its companion battalion west of Noville. Hoping to get in a strike before the II Battalion could be reinforced, the Hessian Hussars tried a charge of their own.  This went a little better than the French charge, and did some damage before the light infantry could form square.
Nevertheless, the arrival of French infantry on their flank hastened the hussars on their way, though with little loss.
At this point, the situation for the French was already looking unpromising.  It was touch and go whether they could occupy the village before the Hessians could, and they were occupying the exterior lines of an 'L' shaped front.
From its west bank position in a Permez street (Rue des Ramillies) French gunfire was none too effective, as the Prussians drew back a little from the riverside.
The French too reformed into a more coherent line. 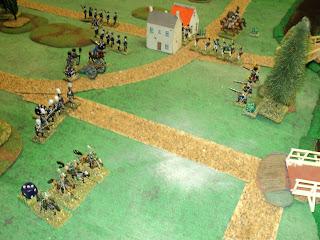 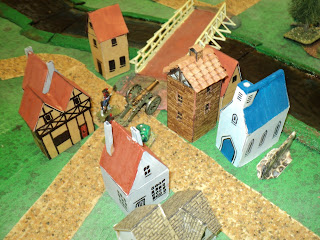 His command now organised into a proper line, Oberstleutnant Bluemfondl determined that the key to the action was the seizure or capture of Noville village, closing off the road south therefrom, and then, if possible to carry the bridge beyond.  Forcing the enemy away to the south and southwest, the Hessians could take Permez, and secure their own continued march westward. 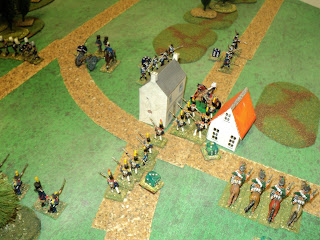 The operation began with the infantry attack by both battalions of the Kurfurst Regiment.  Much to Colonel Tarquin's dismay and disgust, out popped II/3me Leger like a cork from the place.  An attempt to recapture Noville was sharply rebuffed with loss; a second French cavalry charge was badly roughed up; and at last the French grip was pried loose from the village.  At this point the French had lost 6 Strength points (SP); the Prussians, zero! 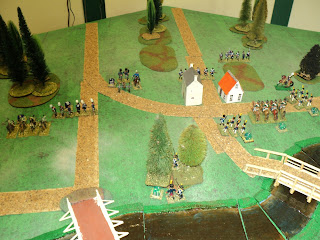 Thus encouraged. the Germans applied further pressure.  Although the French managed to score some damaging hits of their own, they finally acknowledged it was time to depart the arena.  It was touch and go whether the voltigeurs would get away - and it was probably lucky that the Hessians did not bethink themselves to go after the French cannon.  During the retreat the French fell below the 'exhaustion point', having lost 8 SP; but handed out a few sharp reminders that reduced the Prussians by 4 SP.  Having distanced the pursuit, the French drew off to the south.  The Hessians could occupy Permez without interference. 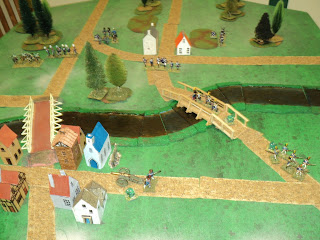 The Hessians could claim a decided success; it was now a matter of whether they could consolidate upon this victory.

To be continued:  The Divisional Action at Permez.

Several months ago I received my hard-cover copy of Bob Cordery's The Portable Napoleonic Wargame.  I have not yet played out any actions with it, but I certainly have spent some time thinking about it.

Outlining, as it does, disparate scales of action - brigade, Division and Army Corps, it seems to me no great leap to determine that on my 15 x 11.5 hex board, an Army level action, involving more than one army corps the side, ought to be feasible.

So several ideas have come to mind:#1. An escalating battle, starting with the brigade level action, then stepping up to Divisional thence to Corps level.  This would involve at some point interrupting the action to accommodate a broader engagement.#2. A fictitious add-on to the 100-days campaign, in which the North German Federated Corps (real) under General von Kleist encounters the 'Army of the Meuse' (fictitious) somewhere east of Liege.#3. Refighting Wavre, pitting two French Army Corps plus cavalry and Teste's infantry division against Thielemann's III Prussian Corps.
Already I have developed Orders of Battle for ##2 and 3.  Project #2 looks promising, as both sides comprise a single army corps.  One, the Prussian, is actually historical, though it didn't really get involved in the campaign until after Waterloo.  The French 'Army of the Meuse' is fictitious, possibly drawn largely from the several fortifications along that part of the French frontier.  At one point during the slow process of building his corps, General von Kleist got word of French troop movements heading his way from the south.  My departure from history was to suppose this rumour had been true.

Project #1 is probably the best place to begin - but why not combine #1 and #2?  Not a bad place to start.
I'll begin the narrative in another posting, but you might be interested in the Orders of Battle of the respective Army Corps.  For the Brigade and Division sized actions, OOBs will be listed with the narratives.

Notes:
*1.  Prussian Brigades were cognate to Divisions in other Armies, and are so treated here.
*2.  The infantry strength points (SPs) I have assigned 1 per battalion, unmodified by quality.  The effects of unit quality I have confined to combat outcomes.  Note that 1st Provisional Regiment comprises 4 battalions - numerically a very strong unit. (This is a departure from Bob Cordery's scheme, but I reckon it should work OK).
*2A.  The 'Poor' rating testifies as much to indifferent equipment as to level of training of the Anhalt-Thuringen and cavalry brigades.
*3.  The cavalry SPs have been allocated 1 per 2 squadrons.  This tends to be inconvenient were units to comprise an odd number of squadrons, but there the SPs would be rounded up and the unit down-rated one qualitative level.
*4.  Artillery have been assigned 1 SP per 20 guns approximately.  The NGF Corps in fact had 16 - rather under-equipped for an Army Corps.

Note:
*5.  One feels there ought to be some differential between heavy and light cavalry, but I have left that issue alone for now.

To be continued: Brigade Action at Perwez.
Posted by Archduke Piccolo at 7:50 PM 4 comments: