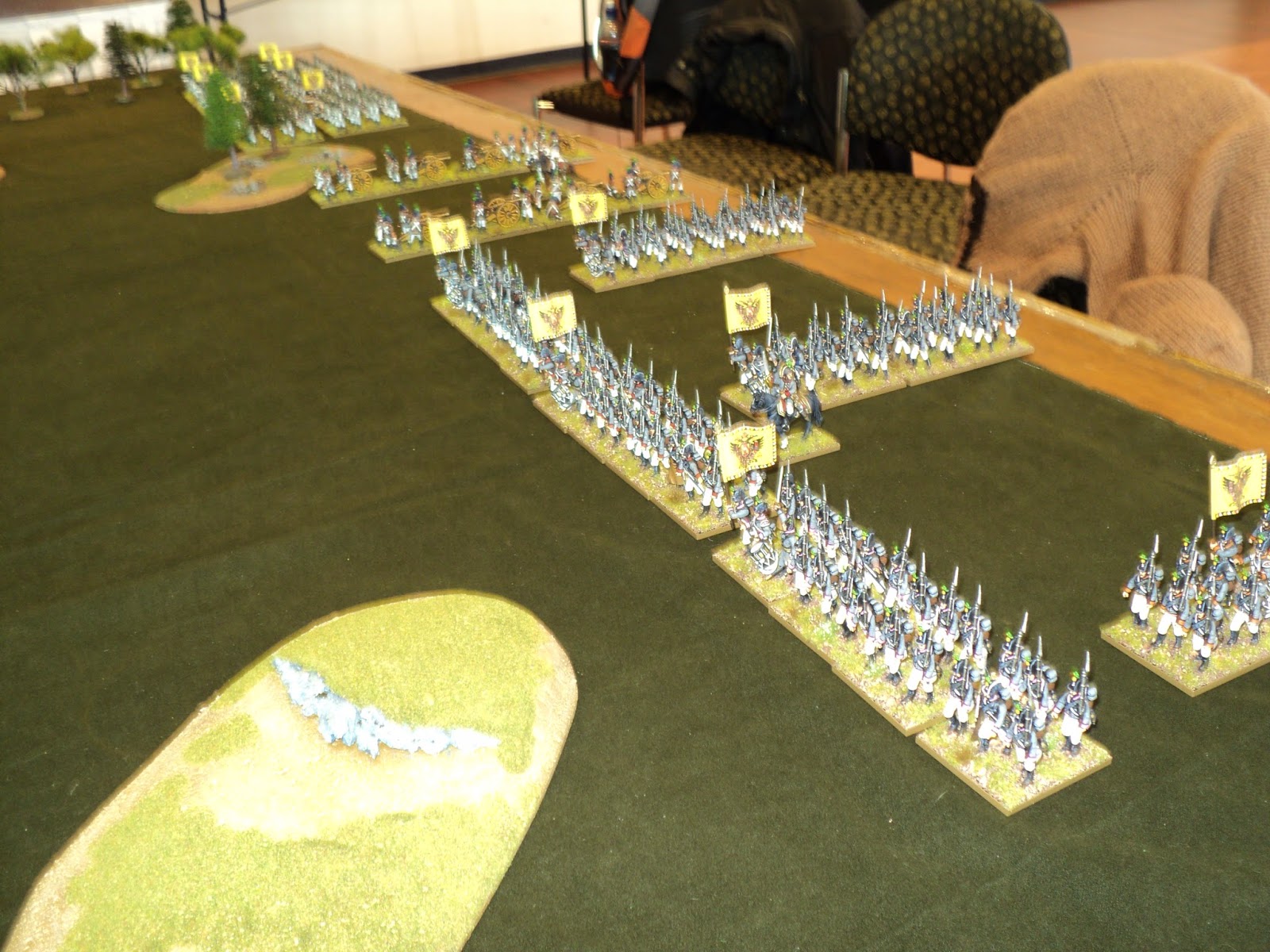 
With the collapse of two of the large Austrian battalions, together with the five long since departed landwehr units, the Austrian army morale broke, and the survivors withdrew from the battlefield. We had handed out a few licks of our own - two French battalions had also broken - but there was no disguising the action as other than a decisive French victory.  Congratulation General Poulecoeur Andy!
Posted by Archduke Piccolo at 6:16 PM 4 comments:

A couple of weeks back an old wargaming buddy now domiciled in Southern England was making his occasional visit to his home town, Christchurch, New Zealand.  In Andy's last visit, some 5 years back (already!), we played an American Civil War game, refighting the classic Don Featherstone scenario 'Action in the Plattville Valley'.  It did not go well for the Confederates under my command.

As Andy seemed to have enjoyed that previous encounter, he requested another ACW game, again using my old school Bluebellies and Greybacks rule set.  At that I thought one of the C. S, Grant's 'Green Book'* Scenarios would be    suitable for a quick pick-up game.
The 'Reinforcements in Defence' seemed to be eminently suitable.  Laying out the terrain and the concept, I gave Andy choice of sides and whether he wanted to attack or defend.  He chose the Union, on attack.  They had to deploy on the table edge at X-Y.  A small brigade sized all-arms Confederate force stood on the ridge (Bone Ridge - B) to the west, protecting the road junction further beyond.  Meanwhile,  through Arnottsburg (A) a strong relief column was marching to its rescue.
The forces were (the Grant originals adapted to my own organisation):
Union: Major-General Erasmus Schoonhauser
Brigade: 4 x 27-figure infantry regiments
Brigade: 4 x 27-figure infantry regiments
Brigade: 3 x 10-figure cavalry battalions
Battalion: 2 x 2-gun batteries (1 smoothbore, 1 rifled); each gun 4 crew.
Total: 266 figures (including generals) and 4 guns.
Confederate:
Hill Defence, Brig-Genl Artemus Tumpickler:
2 x 27-figure infantry regiments
1 x 15-figure cavalry regiment
1 x 2-gun battery (12pr Napoleon smoothbores)
Total: 78 figures (including general) and 2 guns.

Unfortunately, the following photos don't really follow the action, as I tended to get too involved in the brisker moments to take many pictures.
These pictures indicate White's plan: a frontal assault by three regiments of 1st Brigade, supported by the remainder of the infantry and the artillery, whilst the cavalry outflanked the ridge line from the north.

The following pictures show the early developments.  Gun and infantry fire drove off the attack by the left-most Union line, but the other two regiments shook off their losses and closed the range. Just to be clear, my rules remove casualties, and are bloody into the bargain.  They ain't for the faint hearted.
Losses mount on both sides as the ridge line comes under heavy attack.  The defenders repulsed the entire first wave of Union infantry handily enough, but the latter had plenty to fling in to the attack. The local rebel horse, unable to wait for the help of the reinforcing cavalry charged the enemy horse to forestall the latter's outflanking movement.  Outnumbered 20 to 15, the Rebs gave as good as they got, but, seeing the odds lengthening against them, broke off the action and fled towards the town (Both sides lost 4 figures, which meant a morale roll for all 3 units involved.  The Union pair passed theirs easily; the Confederates failed).

Fortunately, the second Reb cavalry unit was available to avenge their comrades, and the Union horse were in turn driven back.  But behind the leading Union battalions trotted a third.  Just as the Confederate ridge-line defenders began to crumble, they took advantage of the infantry success and charged the enemy artillery section that had limbered up and was making off from the north end of the high ground.  Defending themselves with pistols, trail spikes and rammers, the gunners fought well but were completely overwhelmed.  The guns remained as trophies for the Union soldiery by now swarming over the recently defended position.

The 8th Virginia, defending south of the road, made off in good order despite its losses, together with its accompanying gun section.  But its companion unit, 46th Virginia collapsed under the weight of superior musketry and gunfire, and fled west of the road junction where they attempted to rally just short of the hill beyond.
It was clear that no counter-attack was ever going to recover the ridge.  The Confederate commander then resolved at least to form a line centred on the road fork and the nearby farm.  This line knew a shaky moment when the Union cavalry that had just overrun one artillery section went after the other.  But themselves faced with disappearing among surrounding enemies, the horsemen fetched a wide arc behind the line of 8th Virginia and made it back to their own lines.

A lull fell over the field as the Union brought up its troops for the assault and the Rebels tried to form a coherent line.  The Union gunfire was particularly galling against the Confederate right, but they were giving better than they were getting on the other flank.  When the final assault went in, the farm defenders crumpled quickly, just as the 8th Va also found the gunfire they were receiving too much to endure.  Thus thinned out the Confederates line was looking very shaky.  But the effort had exhausted the Union infantry, most of whom fell back beyond the ridge crest.
At this point the day was getting well advanced.  Both sides attempted to rally the units that had fallen back.  The Confederates had the advantage that the rallied units could be brought quickly back into the line.  The Union troops would take a little longer to return to the fray.  Night drew in, the Confederate line had (barely) held, the Rebs claimed a hard-won victory.

Just out of curiosity, we totted up the losses whilst packing up.  The CSA had lost something like 60-65 figures, the Union maybe 20 more.  The game played out in a little over three hours.

It has been a very long time since I have done anything with my ACW armies, and the game indicated strongly that it was high time that changed.  Since then I have reorganised my cavalry into 4 x 23-figure CSA Regiments (actually one of them has just 21), and 6 x 15-figure Union Battalions. I've also begun a certain amount of painting to refurb these figures and arrange them into easily recognisable, distinct units.  Three units of Airfix French Foreign Legion figures that were to form my 'Coloured' infantry Brigade will be phased out altogether into an entirely different army, and probably replaced by a similar number of Revell or ESCI figures.  Not a huge project by any means...

Next time, my second game against Andy: Napoleonic, with Lasalle rules.

Email ThisBlogThis!Share to TwitterShare to FacebookShare to Pinterest
Labels: The War Between the States
Newer Posts Older Posts Home
Subscribe to: Posts (Atom)