A couple more buildings for the Jono's World project.


Acknowledgement:
Thanks to Mike of Mike's Wargaming Blog for following this blogspot - the 86th to do so.  As is my wont these days, I have a look at what new followers have been doing.  I think Mikemight be another who likes to construct his own terrain features.

Almost finished: the factory building for my 'Army Men' project that I have been calling 'Jono's World'.  I don't know what the factory makes, but it seems that Horatio Cogg, William Sprockett and Abraham Splyne hold several patents in their home country for machining machinery.  The Kiivar Branch has been established, of course, for tax avoidance purposes...
As the thing is a shoe box clad in brick paper and roofed with corrugated cardboard, I could have called the firm Fibb and Lye Cobblers Ltd, or Shoehorn, Last and Sole Co.

My thanks to 'Maj. Guiscard', Governor General of Sector Six, as the 85th follower of this blog.
The Maj. Guiscard has developed a fantasy world peopled with some strange but engaging personalities, including the eponymous Major.  I recommend a visit to this place.
Posted by Archduke Piccolo at 6:10 PM 10 comments:

As part of my 'Jono's World, Sideon IV, 'Army Men' project, it seemed to me appropriate to build up a small, generic set of buildings in the appropriate scale.  At a pinch, I guess the OO scale cardboard buildings familiar to us all might have done the job.  But it was whilst finishing off a packet of breakfast cereal that I saw the opportunity to knock up some simple buildings. 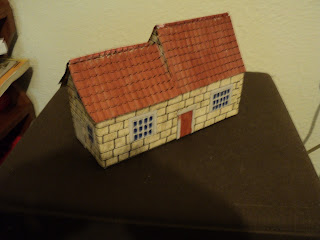 First effort - a simple cardboard house.  The cladding is 'brick paper' downloaded so long ago I don't recall the source.  The roof is corrugated packing cardboard (which I seized before it got thrown out, its potential so obvious the opportunity was not to be missed). 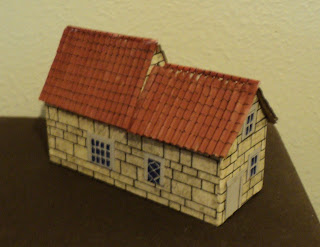 Rear view.  The house has a door at either end and along one side.  The doors and windows are glued on, rather than cut out of the cardboard.  The glazing or door is drawn on one piece, then a frame glued around it. The whole then applied to the wall of the house.  The roof colour is from a damn-near 40-year old tin of Rowney Fixed Powder Colour - great for roofing.  As the corrugated cardboard then looked rather like corrugated iron, the tiles were suggested by drawing the horizontal black lines. 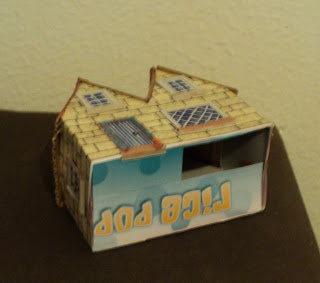 A second building tipped up to show the type of building material used; a Rice Pop packet. 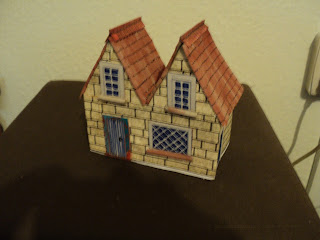 The same house.  Like the first, is has been built to suggest possibly two dwellings, or two parts, each of which might be occupied and defended by a squad of infantry or a machine gun section, say. 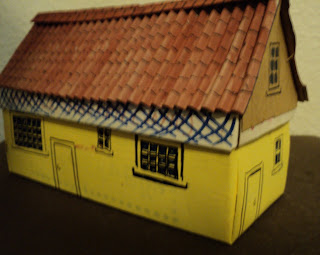 Here is the Cock and Bull Tavern, the local  hostelry and purveyor of the finest brews and distillates, not to mention the produce of the regional grape harvest; but also serves up the fieriest stew and dumplings that settles in the stomach like a slab of concrete.  If you think that's a load of cobblers' , you'd be close to the mark... 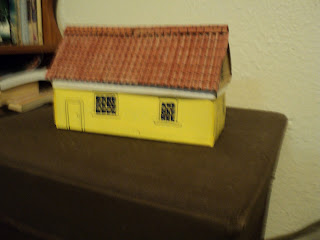 For this edifice has been constructed from a shoe box, painted yellow and the windows and doors drawn on.  This thing can and will still function as a box. 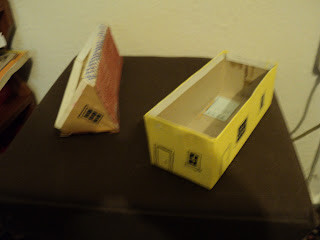 The following pictures show a rather more ambitious example of Sideonian architecture - a cruciform dwelling, made from a rather smaller cereal packet.  I added casement windows and other little details. 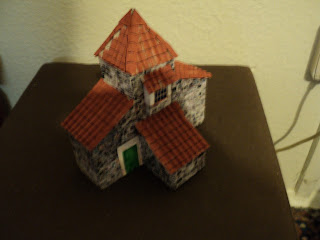 You will observe I wasn't overnice about 'accuracy' of construction or finishing. 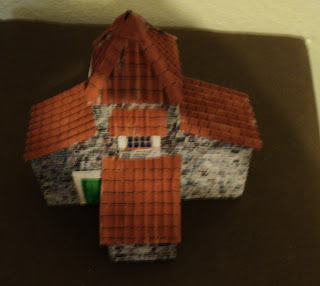 This last is some kind of manufactory awaiting construction.  Those two sheets of grey brick will provide the cladding for the walls of the shoe box.  There will be inward and outward dispatch doors at either end, and somewhere a lean-to with smoke stacks.  The stereotypical rip-saw roof will (I hope) create the illusion that this is a factory or foundry or something reasonably important to the local economy. 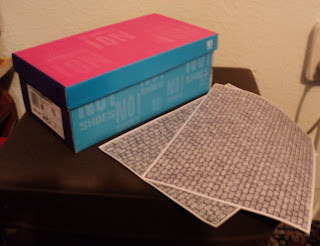 Since taking those photos yesterday, I added a bit more 'finish' to the cruciform place - extra windows with tile awnings.  The cladding is also downloaded stonework pattern that I had intended as cobbled street.  At that, I accidentally printed sheets in different scales.  Can you tell? 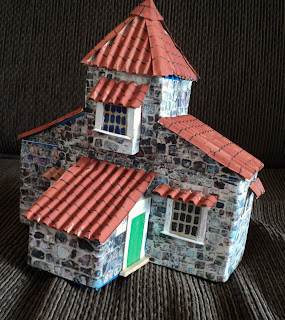 Different angle.  This thing was fun to build - and it's rather fun to try and imagine its interior layout.  One suspects that the whole dwelling is about two feet sunk into the ground. 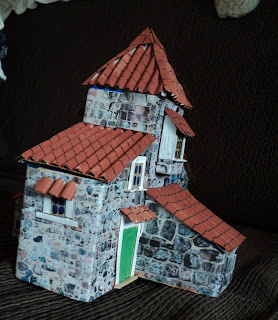 The next 4 pictures are of a column of Raesharn troops marching through a Kiivar village. 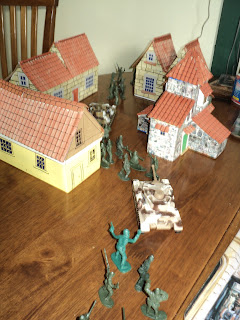 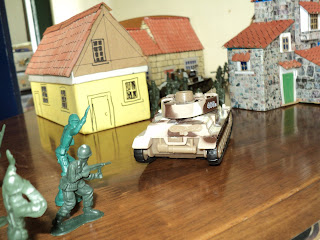 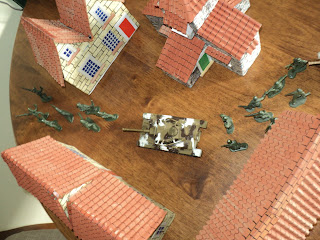 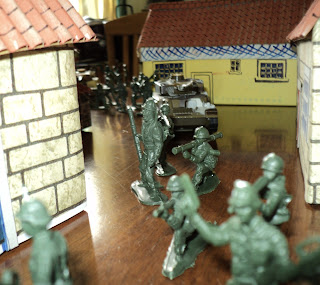