My recent Portable Quatre Bras game, along with the earlier Army (Corps) games (Wavre and Grand Rosiere) have led me to think about ways to obviate combats that (a) guaranteed immunity from harm, and (b) guaranteed susceptibility to harm.  During the course of the Quatre Bras action, the British Guards Division, in column, ran into Foy's Division.

Foy had the deeper column (3 stands against 2); both could claim a general officer present.  As the combat mechanics stand, there was no way the French could sustain a hit.  As it transpired, the Guards rolled '2' to determined what happened to them; and the French rolled a '1'.

This seemed to me not an especially desirable outcome.  Why shouldn't the French at least have had some chance of taking a hit?  In the write-ups of those battles, I made certain proposals, but have since decided that they aren't quite satisfactory.  I want to stick as close to the 'spirit' of the original rule set as may be, and felt that my suggestions did that.  But they also seemed rather hard to remember.  So I have had a considerable rethink.

First of all, a reminder of the Portable Napoleonic Wargame Combat Rules.  I'll rearrange the text slightly, but otherwise the meaning is the same.  Close combat is between opposing stands (figure bases) in adjacent grid areas.  Whose turn it is 'initiates the combat' (I infer even if it is an ongoing one).   IThe original rules are in italics, and I have added amendments to these in roman.


Both sides roll a D6 die for their (own) figure base involved in combat and add or subtract any relevant modifiers.

Note 1:  I am disinclined to offer a bonus for being uphill or a penalty for being downhill, whether shooting or in combat.  My own reading seems to indicate that, owing to a tendency, especially among unpractised troops, to firing high, being downhill might actually have been the favourable position, even though at the time it might not have been perceived as such.   That the perception and reality might have been at odds sounds plausible to me, and for that reason am inclined to leave the matter open.

But now we come to the substance of my proposed amendment.  It is this.  When rolling their respective D6s, the players also determine their bonuses (pluses) and penalties (minuses).  The side with the higher 'plus' count adds 1 to his D6 roll, and the player with the higher 'minus' count reduces his D6 roll by 1.  The effect of this is that in no combat is the risk of a hit less than 16%, nor greater than 50% (2).

Note 2: I did consider that the higher minus count reduce his D6 roll by the difference, but for now, prefer the 'gradualist' approach. 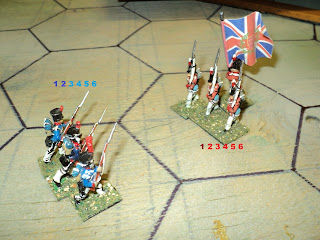 into contact with a British (RED) stand accompanied by its Division commander (denoted by the flag).  The numbers indicate the D6 scores that will result in a hit being received. 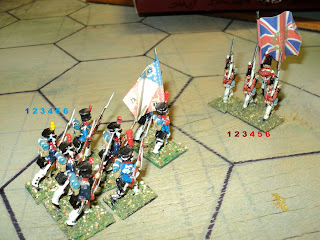 2.  A BLUE column of 2 stands, led by a Division commander, advances into contact with a RED brigade stand also accompanied by its divisional commander. 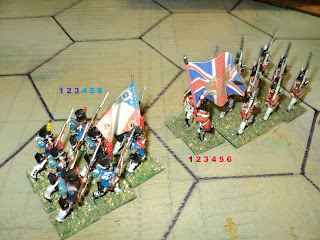 3.  A BLUE column of 2 stands, led by a Division commander, advances into contact with a RED Division column also accompanied by a general. 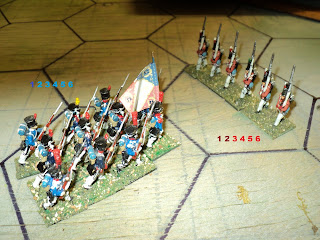 4.  A BLUE column of 3 stands, led by a Division Commander, advances into contact with a RED line of 2 brigade stands.

Here I'll pause, and add more examples next time.
To be continued...


Posted by Archduke Piccolo at 8:57 PM