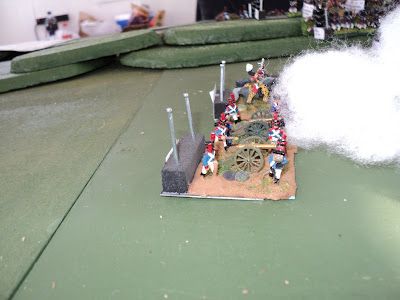 Marshal Massena's first battle as Commander in Chief of l'Armee du Nord, has taken three campaign months of strenuous marching and countermarching to bring about. The Vive l'Empereur Peninsular Wargame campaign has been going on for over a year, now, interrupted from time to time by earthquakes and heavy snowfalls, with very little action in Portugal to show.

In the South, Marshal Soult and his subordinates (Generals Suchet and Sebastiani de la Porta, and I think Marshal Mortier) have been beating the Spanish time and again, though the Iberians seem still to be popping up here and there to create nuisances of themselves. The only involvement of the L'Armee du Nord occurred when Junot's VIII Corps march upon Badajoz was briefly interrupted by a Spanish force defending the sole river crossing of the Guardiana River. Junot's operations in the western parts of Estremadura had to be rethought when the pitifully small garrison in Madrid was driven out by a popular uprising.

Meanwhile, it was looking as though Massena was being forced out of Portugal without a major action. Having fortified Guarda - an important road nexus - Massena reluctantly evacuated the place and fell back upon Almeida, just barely inside the Portuguese frontier with Spain. But then, certain intelligences brought by his aggressively handled cavalry operations suggested there might be at Guarda an Anglo-Portuguese force of a size worth attacking, but not so large as to make the undertaking too hazardous. 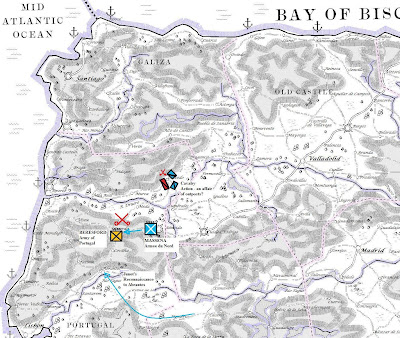 The Marshal Prince of Essling at once seized his chance. Wishing to report to Paris that if he had to abandon Portugal it would not have been without a fight, he was prepared to take a chance on the enemy proving even somewhat stronger than his own. The estimates were that numbers in all arms were roughly equal. As it happened, Massena slightly misinterpreted the information, thinking the enemy infantry to be numerically somewhat stronger. As it transpired his overestimation of the enemy foot was matched by his underestimate of the enemy artillery.

Arriving east of the town the Marshal was faced with a formidable position: the place itself crowning a lofty, very difficult, ravine-scarred eminence flanked by woods that presented an almost insuperable obstacle to his cavalry. His initial idea of a sweep around the north he ruled out of court after a close reconnaissance of the terrain. It had to be a left hook - and that didn't look very appetising, neither.

Fortunately, in Marshal Ney (Andrew Taylor, who had under his own hand 9 battalions and the 8pr company of Marchand's Division), and his Divisional commanders (Geoff had Loison's single [9th] Brigade [4 bns], Lorges' sole [2nd] Dragoon Brigade [3 regiments] and an 8pr company), the Prince had subordinates of the same mind. It was a simple matter to draw up the battle plan, based upon the line he expected the enemy to occupy. I (Massena) doubled up by taking the roles of General Mermet (7 battalions of 4th Division), the 12 pr guns of the Reserve artillery, and General Soult (2 light cavalry regiments). That seemed to me a fair division of roles among the three of us. 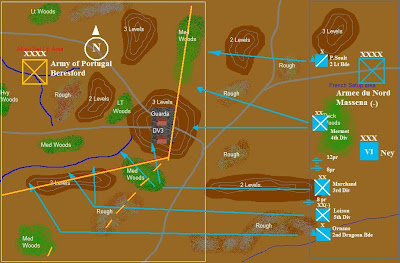 Directing the Marshal Duke of Elchingen to lead the left hook by Marchand's and Loison's Divisions, preceded by Lorges's dragoons, 'Massena' adopted an overseeing role, content for the most part to let his subordinates to get on with it (What this meant was, the 'Marshal Massena' figure stayed close by 'Marshal Ney' whilst I also took command and spent most of my time as 'General Mermet' of 4th Division and 'General P.Soult's' brigade of chasseurs-a-cheval. Occasionally I would check out how things were going and take pictures. Once I did 'send a message' to 'General Loison' (Geoff) when I thought his troops were swinging north prematurely, but that was much later in the day).

The French general advance shortly before 9:00 a.m. Already the general plan of attack is taking shape. In the foreground, Soult's Chasseurs have discovered two Portuguese battalions lining the woods north of Guarda; and the leading elements of Bardet's 7th Brigade are beginning the climb towards the town itself. Meanwhile the rest of Ney's VI Corps are marching into the Alied left flank and rear... 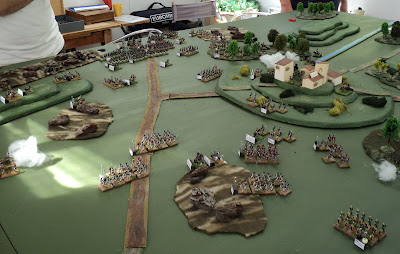 The first contacts upon Guarda Hill itself, and in the thickish woods (classed as 'medium' in Colin's rule set) to the south. The sole unit of light infantry in the Allied army - a corps of tiradores - were lucky to survive being attacked front and rear by French light troops. They flung back their assailants and managed to extricate themselves behind a unit of Portuguese line infantry (classed as militia in this campaign). 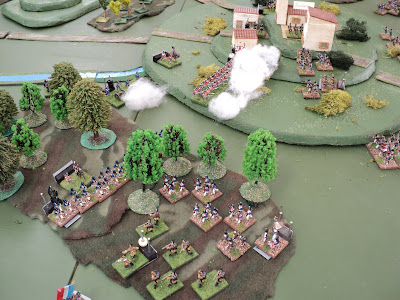 In the Comments to a previous article, I was asked about the little blocks of wood with the two nails sticking out. The rule set we are using have been authored by Colin Foster, the Duke of Wellington in this campaign, and at whose place we fought this action (and as fine a wargaming venue as you could wish).

To the blocks can be pasted labels identifying units and commanders, and the nails hold beads that log information. The black beads (which for some reason we call 'pips') tell us whether and to what extent the unit may act. Each bead signifies an action and is removed when the action is carried out (shooting, moving, changing formation). A unit can continue acting until it runs out of 'pips'. 'Pips' can be carried over into an opponent's bound, which allows it to react to opponent's action. They aren't carried forward any further, but are renewed at the beginning of the player's own bound. In effect you top up unused 'pips' to the unit's maximum allowanc). This allowance, the number they receive, depends upon the unit's quality (raw, experienced, veteran) and whether it in under command (i.e. within the command radius of its brigade commander). Additional 'pips; may be allocated by higher command when certain conditions are met (which is why 'Massena' (the figure) remained close to the main action throughout the day).

The other nail holds beads of other colours, and shows the unit's morale state - from extremely enthusiatic to completely routed. A given unit's 'ground' state is 'beadless'. When a unit takes a hit, it receives a white bead (in addition to any beads signifying atate of morale). A second hit means an element (roughly 100 infantry, 75 cavalry in scale terms) gets removed, along with the bead. The bead signifies a 'helf-element' loss.

I find the system quite simple to use, quickly informative and visually not unappealing. It reminds me somewhat of John Sandars's log-pin system for his Sandskrieg game. Mind you, threading the beads on the nails when one eye doesn't function properly can be a bit... awkward...

To be continued...
Posted by Archduke Piccolo at 5:42 PM