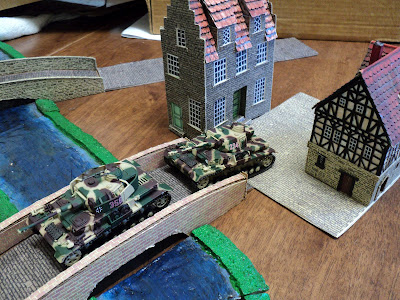 It was a recent discussion in one of my yahoo groups on the subject of collecting or making one's own terrain pieces for wargames that has led me to begin an occasional series on the subject. The lead photo shows buildings, bridges and sections of pave that have all been scratchbuilt in some way. Only the river sections are manufactured items, though I've had to paint them myself. 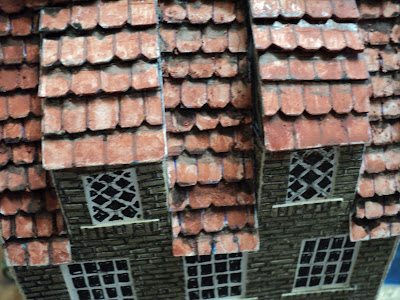 The above building was constructed from a sheet of stone or brick patterned card I think originally designed for the facing stonework for the entrances of railway tunnels. Of course they are adaptable to a multiplicity of purposes. Buildings such as this simple design, for one. The roof tiles are made of cardboard strips (thin card is best)marked and notched along their length. The strips are about one-and-a-half to twice as wide as the tile rows to give the next row something to overlap and anchor to. The tile rows are then built from the bottom up to the ridge. The whole roof was painted with water colours. 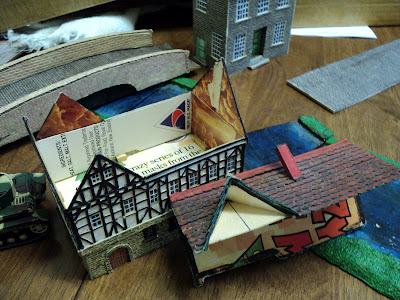 This next building was made some 15 or 16 years back from cornflake packet - except for the 'railway tunnel' stone/brick card around the ground floor. The black timber work was made separately and applied (the pictures will show where wear and tear in the intervening years have caused some to fall out. Though it is true the plaster was supposed to be built out flush with the timbers, the '3D' effect of the applique timbers looked quite good, I thought. Took a bit of a while to make, but I feel I really ought to make more of these. 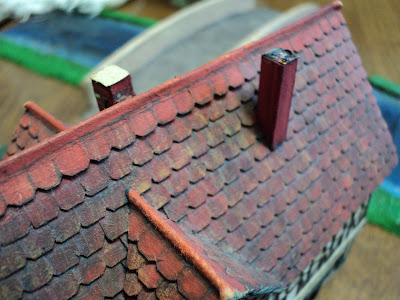 With a limited budget, it became a habit to look for the terrain potential in any piece of garbage lying about. Same goes for model scratchbuilding, whence comes to that. 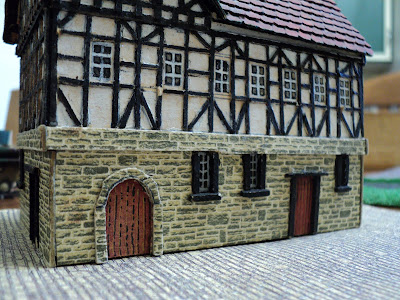 Here is a clearer view of the 'brick paper' used for the ground floor. I had used a sheet of this stuff for stone walls, and the remainder seemed suitable for the purpose here. 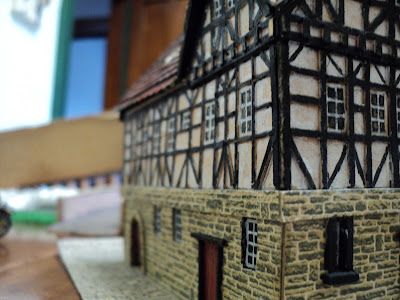 You will observe in these last two pictures that the building stands upon a stretch of cobbled pave. What I did there was take the rather dark brick paper of the first building in this article and scan it as a picture file on my machine. Then I played around with the colours to get a lighter tone, and print out on paper. 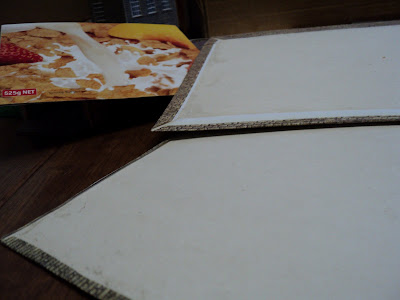 As the paper was a bit thin, I pasted them onto something a little thicker, seen in reverse here (cornflake packet again). 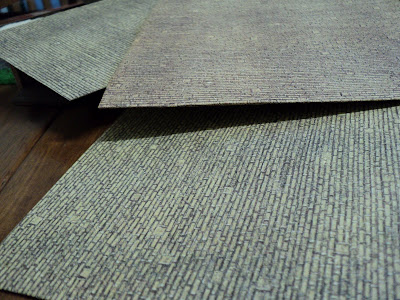 And here they are: 3 areas of cobblestone pave. These sections can be used as open spaces such as town or village squares; or instead as the profiles (footprints if you will) of build up areas, with buildings and what have you placed on top.

Several years ago a friend received a whole wodge of timber off cuts of very interesting shape. Flat along one edge, the other formed an arc of a circle. These were maybe 10 inch to a foot long, and about an inch or so thick. The immediate thought was: bridges. 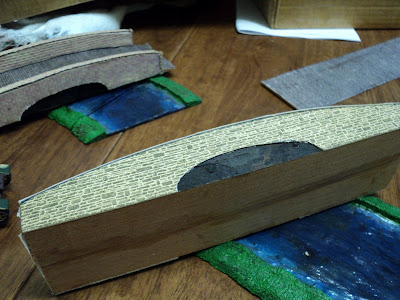 Individually, they were not going to be wide enough, but two carefully selected pieces glued side by side looked very promising. Then out with the stonework card, cut and paste gave us the sides. Originally I had two arches, but that looked odd with my river, so I settled for a bigger, single arch. As you will observe, I had no truck with cutting out the wood to make the arch, simply painting the area black. Good enough for me! The paving was provided (once more!) by my scanned and printed stonework paper. 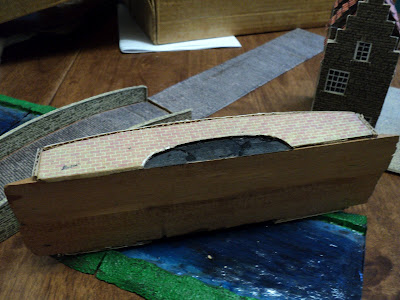 The brick paper for the second bridge was provided by a different brick paper pattern from a piece that was unearthed during a clean out at the club and about to be thrown away. True, this card wasn't in the best condition, but I rather like my stuff having a well-used look. At any rate, there wasn't really enough to make a factory building from (which was my first intention), but when I at last got around to the bridges, its purpose became apparent. 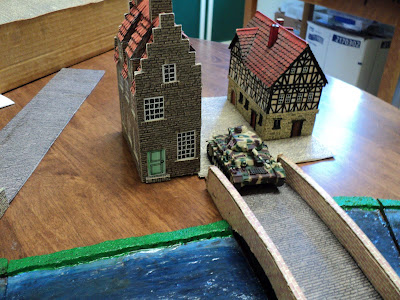 I'll close here with some more pics of a few of my scratchbuild terrain pieces. 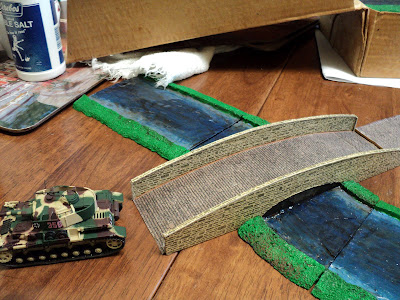 Quite a bit of the stonework paper got used to make pave sections for European village streets. These were backed on rather thicker card than the BUA/town square sections, because I felt for that purpose they needed to be more robust. 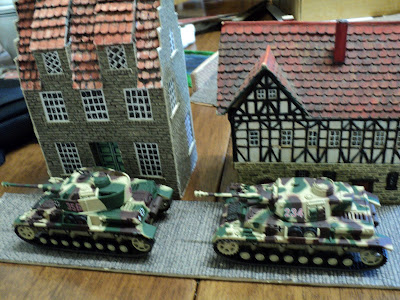 Posted by Archduke Piccolo at 11:25 PM

Email ThisBlogThis!Share to TwitterShare to FacebookShare to Pinterest
Labels: Terrain...