A recent conversation with the 'Evil Uncle Brian' - author of the engaging 'Fist Full of Plastic' blogspot, reminded me of a project I lifted from an ancient wargames magazine years ago. This was set in the closing weeks of the war - a day some six or seven weeks before VE Day, to wit: 22 March 1945. The Soviet juggernaut was poised to swamp the German defences, and drive straight on to Berlin, at that time some 50km (32 miles) from the Front Line. 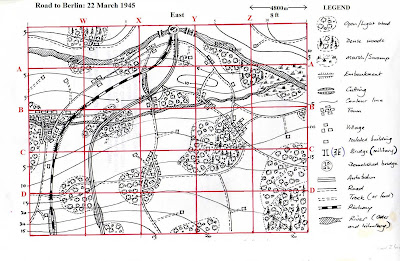 The overall Operations Map depicts part of the Oder River valley and one of its tributaries, separated by a ridge of between 5 and 10 metres in height. Powerful elements of the Red army has made a lodgement upon the West bank of the Oder itself, east of the line A-A; much more remain to cross the river. The demolished civilian bridges have been replaced by several military crossings. 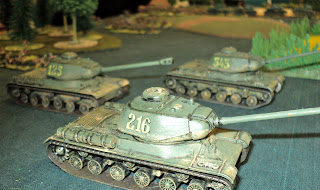 Germany:
- 366th Infantry Division (weak, and with a limited and hodge-podge motor transport pool);
- 27th Panzer Division (with a single weak Panzer Abteilung, but whose Armoured Infantry Regiment comprises companies with a wonderful array and variety of equipment);
- 'Clausewitz' Panzer Division (much better provided with tanks than 27th Panzer, but still just the one battalion, albeit with Tiger II and Panther G);
- One Volksturm Battalion garrisoning one town.

It was in translating these formations into Command Decision terms that I was struck by the organisation of in particular the panzergrenadier units in both Panzer Divisions. Possibly the champion of these was Nr 6 Company of 27th Panzer, which I eventually settled upon as:

The sharp-eyed among readers will have observed the asterisk marking the StuG IIIG. The reason is that Nr 6 company had an interesting mix of equipments of small numbers of which a couple of StuGs formed part. They also had SdKfz 251/22s, SdKfz250/7s, and - here's the kicker - a T34/85 or two. Not bad for an Armoured Infantry compnay, eh?

Because the numbers of each were so few, I thought it best to offer a choice of one from among these 4 vehicles - including the T34 - but leaving the StuG as the default option. But more recent versions of CD than I use (CD2) indicate that the battalion gun (bg) option for equipments like battalion level infantry guns has been extended to other equipments. So perhaps players might get the option of two out of StuG IIIG, SdKfz 250/7, SdKfz 251/22 or T34, but no more than one of each, and both classed as (bg). 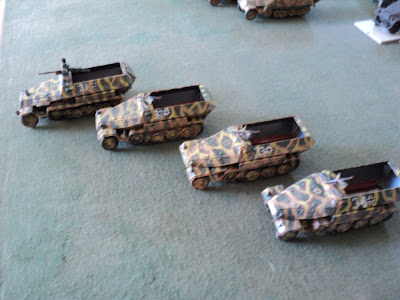 Posted by Archduke Piccolo at 8:05 PM