As indicated in my last posting, I have made progress on the two Hummel assault guns I have been building.


The front plates of the fighting compartment have been added.  I figured out a way of getting that bend close to the embrasure: scoring about 2mm parallel to the edge and using a rat-nose pair of pliers to snap the edge around.  Three of the four attempts were successful; the fourth I actually snapped the thing off.  As it was straight, I just glued it back the way I wanted it.  Gaps I tried filling with Green Stuff, and I'm here to tell you that damned gunk is a beggar to work with.  How people achieve what they do with it I can't imagine.

The curved piece (gun shield?) immediately behind the front plate I glued direct to the hull, rather than to the gun (which I think ought to have been done).  I was rather puzzled how to make these, but solved it by using a plastic bottle that once held floor cleaner.  I wanted a thickish soft plastic for this piece.  It took several goes to get the dimensions more or less right, and the thing still required a little extra bending, but the result was satisfactory. 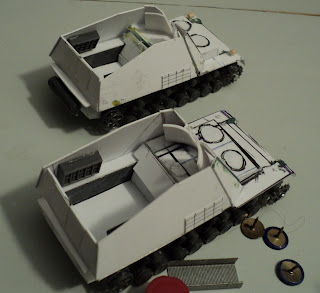 What to do about the interior of the fighting compartment?  The ESCI model had a couple of boxes close by the rear, and pair of seats beside the gun breech.  I'm very tempted to leave them out, partly because the ESCI seats don't look right anyway, but also to reserve the space for the gun crew.


A glance at the deck in front of the fighting compartment discloses a pair of hatches.  I wince each time I look at this.  Having no other source of plastic discs the appropriate size, I tried cutting the circles from very thin plastic sheet.  This was not very successful, the less so when I was stupid enough to glue them on anyway.


As Hoffnung once remarked: 'I must have lost my presence of mind!'   Since taking these pictures, I have found that the judicious application of black marker pen effectively disguises the irregularities of shape.    There is reason, then, to hope a clever paint job will have the same effect.  Otherwise, if I do find something more appropriate, they'll have to be placed overall, as I'm never going to be able to get those botched hatches off again. 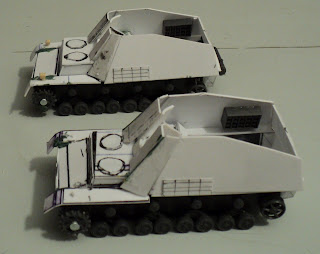 I wondered too how I was going to do the louvres at the sides of the fighting compartment (I suppose they are louvres).  Just painting them on I could not see as a satisfactory solution.  As anything more elaborate seemed to me fiddly and hard, I just attached an appropriate area of thin plastic card.  The pencil lines serve as painting guides/aides memoire for when the finishing touches are added to the vehicle. 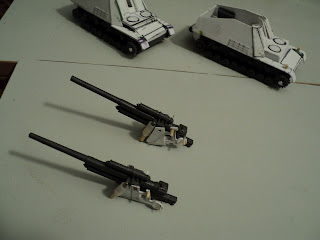 To the basic ESCI guns, I added the cheeks (?) with holes to accommodate the guns' trunnions; the hydraulic elevating gear, and behind the cheeks, the wheels, handles and sighting gear in a very simplified form.  The result isn't hugely accurate upon close examination, but the overall dimensions are reasonably close.

I wasn't especially consistent here, trying out different materials for each.  The right hand side handle is a bit of staple for one gun, a two short pieces of plastic glued (with an infinitude of trouble) at right angles on the other.  Similar sorts of differences appear on the other side.  The final painting will disguise these disparities.

The following pictures show what the vehicles will look like once the guns have been properly mounted.  This I will not do until the guns and the interior of the fighting compartment at least have been undercoated. 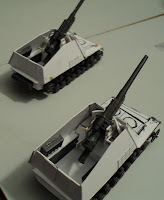 To add a little colour to a rather monochromatic posting, allow me to reintroduce my ESCI model by way of comparison.  Incidentally, my finished model originally came in buff-coloured plastic, rather than the grey of the pieces I am using (also ESCI, if I haven't mentioned that before).

Three Hummels in battery.  However, one of the scratchbuilds is destined for the Army of Evil Uncle Brian (A Fist Full of Plastic), who supplied the kit bits you see in these pictures. In Command Decision game terms, I now have enough Hummels (two) for as many Self Propelled artillery battalions.  But not enough Wespes (three).  However, I do have a Wespe hull, sans (if memory serves) gun.  Now: does this become my fourth Wespe, or does it remain gunless as an ammunition resupply vehicle.  Decisions, decisions...

Posted by Archduke Piccolo at 5:49 PM