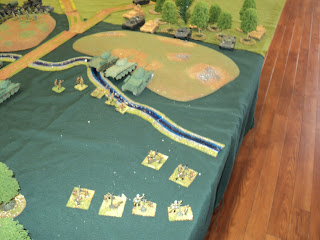 Continuing from my last posting, I had decided my main effort was to to be on my right, the Tank Company being accompanied by two rifle platoons and the mortar company.   The intention was to seize the ridge beyond the stream, eventually to line the crest with the mortars to support the further advance on that axis by the tanks and infantry.  A German light tank, edging around the woods fronting the stream discovered the error of its ways and was swiftly knocked out on the road.


But the Germans rather got the ridge first - or at least had reached a point at which too hasty an advance by my cheloveks was going to be extremely hazardous. 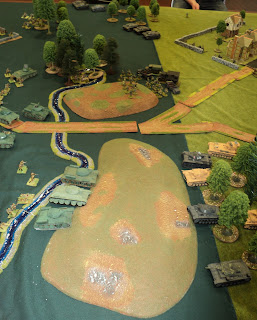 For all that, a section of Nr2 Platoon did occupy the edge of the dense thicket lining the headwaters of the creek, and there awaited an attack by the whole of the German 2nd Platoon. 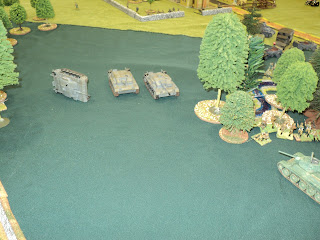 Sure enough, that was where the two forces first collided, the Germans coming on in strength.  The first fires of the Russian infantry felled a few Germans but it was quickly obvious that the line of the stream east of the road would not long be held.  In a brisk exchange of fire, the Russian section gave its all, all ten men dying where they stood, each but one taking an enemy with him.   Quickly the remainder of Nr2 Platoon lined the near edge of the wood to await the German advance therein. 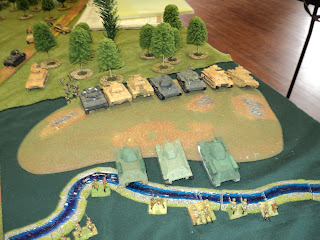 Meanwhile, the StuG Platoon that tried to penetrate the defile between the woods immediately to the north of the town got a swift reminder that the Russian tank company commander was on the qui vive.  The moment the first StuG poked its nose around the corner, it took a fatal hit.  The remaining two sat back for a bit of a think.


As the Russians hesitated on their right flank, the Germans were making use of the time to build up for a massive strike.  Possibly in order to distract the Soviets, or maybe to test their mettle, a PzIV attempted to ease around the east end of the wood.  It also fell victim to accurate effective tank gunnery. 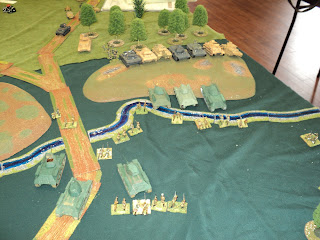 The anticipated surge was not long in coming, but the Russians were waiting for them.  Over the crest came the long line of German tanks, to engage Nr2 Tank Platoon at point blank range.  Outnumbered more than two to one, the latter could, however, count up the support of Nr1 platoon within effective range, and the anti-tank rifles of 1st Rifle Platoon. 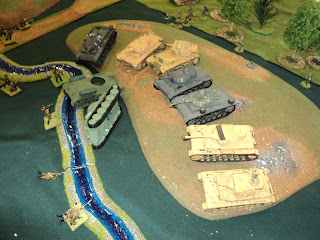 Accurate so far across the whole front, the Russian gunnery failed them somewhat under the close pressure.  True, one panzer blew up and caught fire; another suffered heavy damage but was able to continue the fight, whilst the PzIVF2, coming in for special treatment by the right hand T34, escaped with minor damage.  Despite being on the move,  The Germans did better.  Two T34s bit the dust, one immediately bursting into flames, and the survivor made off. 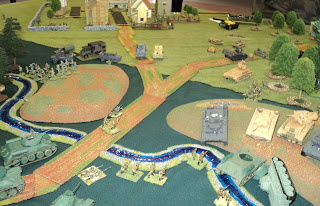 This was not at all good news for the Soviets, in view of the build up of German strength in the centre.  Oberstleutnant von Ormandy had long since made the decision to commit his reserve panzerjaeger to the centre in support of his armoured left hook, and now he brought up his anti-tank guns as well.  The latter move - the classic German cooperation between tank and anti-tank, was to prove decisive, and in spectacular fashion. 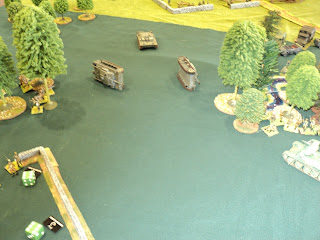 But what was happening on the rest of the front?  With ample armoured resources available, the German commander had made it his policy to apply heavy pressure along the whole front.  His attempted second probe in his right centre suffered a worse fate than the first: a second StuG shuddering smoking to a halt, whereat the survivor fell back a short distance for another rethink. 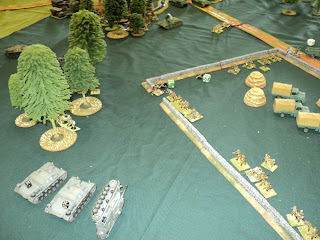 On the extreme eastern flank, a brisk firefight had developed between 1st StuG Platoon and the anti-tank guns and rifles lining the wall of the cornfield.  As they approached, they caught the LMG platoon running for the woods, cutting down 4 of their number before they reached cover.  Sweeping around it they were met by heavy and effective anti-tank that put the long-barrelled AFV at once out of action.  But then the inherent vulnerability of anti-tank guns, even in ambush, asserted itself, and they, and #2 Section's ATR were quickly silenced.

At this point I have to apologize to the reader for the lack of AT guns in these pictures.  I simply forgot to pack the correct box on the day.  So had to substitute Panzer Lehr counters, with green D6s showing crew strength.  I would not have included them in the pictures at all, but they did perform tolerably well on the day, destroying two StuGs, and heavily damaging two others. 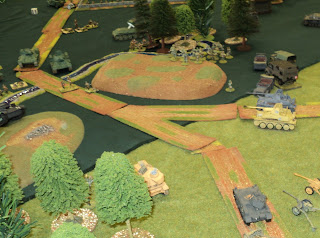 Having achieved an early and perhaps lucky success, the German panzers resumed their sweep, the Russian 1st rifle Platoon losing its AT rifle team to tank MG fire and being edged off its river line position.  The mortar company, unable to achieve anything useful in the circumstances, hastily began to fade into the tall timber to their rear, and the Russian 1st Tank Platoon made ready to take on the remaining panzers. 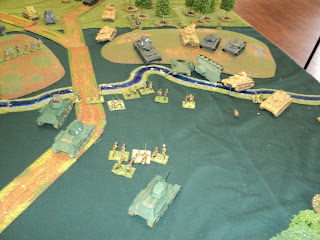 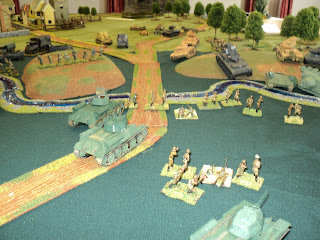 But now the odds were much more heavily against them,  Although they managed to inflict further damage - another panzer knocked out - there was a lot more incoming than outgoing.  For all that, most of the German fire was ineffective, doing hardly any worthwhile damage.  But the gunners of the PaK38 platoon were deadeye veterans of many a battle, each gun taking on a different T34.  Wham!  Wham! two shots, two hits.  Boomph!  Woomph!  Two hits; two knockouts.  His AT guns needing 5s to hit, Tony rolled something like 6 and 7 on his D10;  and  on his D6s for effect: 2 sixes!  You couldn't argue with that! 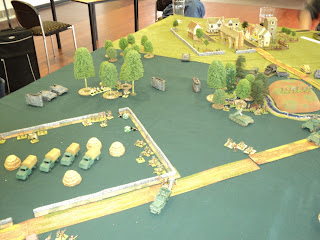 That was the battle, pretty much. Although the remnants of one of the German panzer platoons fell back over the ridge, the surviving T34 of 1st Platoon also decided against sticking around, and made off to the north.  In this decision he was helped by his Tank commander being brewed up in his vehicle under fire from the StuGs on the distant flank. 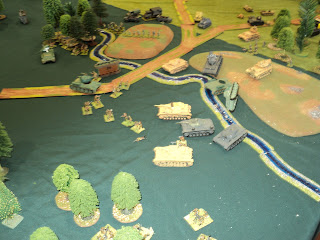 Opposition to the German advance on the right had by now faded away to nothing, and it was going to be a case of sauve qui peut for the Russians remaining. 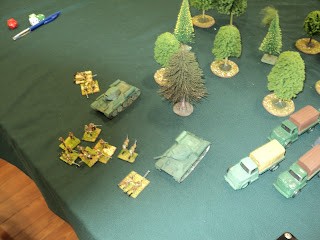 Yet the Germans knew they had been in a fight to crack the Russian resistance.  Though they had killed or wounded some 35 Soviet infantry and gunners, and destroyed 5 of 7 enemy tanks; though they had successfully secure Chilyabunnsk against Soviet attack for months to come, the price had not come cheap. 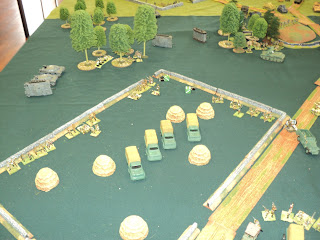 Although just 9 infantry were lost, as many as 7 German AFVs were now wrecks, and a further 5 would have to see the inside of a workshop very shortly (had taken a Heavy Damage hit, or, in the case of the PzIVf2, 3 light damage hits - any more damage would have seen that vehicle smoking merrily on the field). 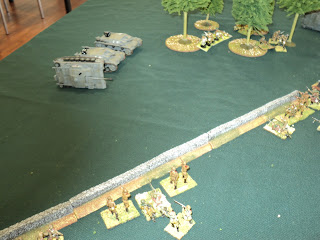 A German victory: undeniably.  But it was one of those occasions in which Col Ivan Andreivitch Dowmanovitchski could sip philosophically his vodka with a splash of vodka and derive a certain satisfaction from the day's events.

Posted by Archduke Piccolo at 1:27 AM