In the last eight years or so my left eye has developed cataracts, and although my right eye seems to be free of them so far, and can still read without corrective lenses, painting figures has become a real problem, especially in the last twelve-month.  Then, about eight weeks ago, my glasses broke.  Already having to be repaired once, they had to be replaced, no question.

So off to the local optometrist, eyes tested, renew prescription, and it seemed that something - not a lot admittedly - might help with the bung eye.  Well, vastly expensive as it was (my lenses are the progressive type, photo chromatic, but not polarised) they do make quite a bit of difference, even for reading.  I've been checking my 3D vision with my Magic Eye book, and the finer 'grained' pictures had been lost to me. Though it has not totally been recovered, the improvement was noticeable. 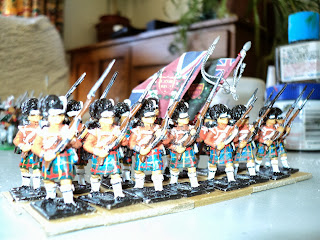 And painting: I feel a bit more like the effort these days.  Pictured are some of my Napoleonic project: A Highland Regiment (bought a couple of weeks ago on Trade Me, and a couple of Russians.  The latter are more 'Revolutionary Wars' but they''ll do for Napoleonics as well.   At this point I'm perhaps about 2/3 of the way through the painting - plenty to do yet, but I just wanted to see what they looked like as my first detailed paint job with new specs. 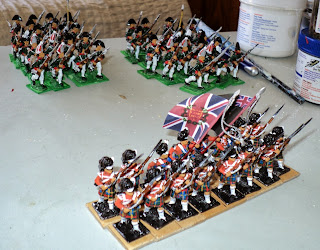 The Highlander battalion is a little bit of historic licence on my part, being the 73rd (Perthshire) Infantry.  This unit had indeed been Highlander, but recruitment problems had in 1809 led to its being opened up to a wider intake, with a consequent loss, not only of its Highlander status, but also of the Highlander regalia from its uniform.  Too bad: I wanted  Highlander unit in my army, and this was the only candidate.  The reason is that, although mine is intended as a Peninsular War army, it comprises Waterloo battalions.  It was much easier that way to get the appropriate flags on line.
Posted by Archduke Piccolo at 5:59 PM