Having received recently a huge addition to my collection of 'Army Men' type soldiery (among other things), it behoved me to make a start on organizing the same.  Several figures being Germanic in appearance - I could see the Airfix and Matchbox antecedents in these larger figures - it seemed to me appropriate that they become  the Sideon IV equivalent of panzer-grenadiers. 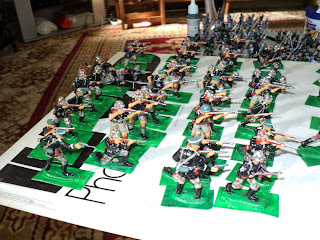 And here they are.  Rather than something historical, I went for a vaguely plausible uniform design of my own: black shirts or uniform jackets, matching camo on trousers and helmets.   At that, there are a few non-regs uniforms in there, especially the Afrika Korps types.  It makes for quite a seasoned looking outfit, I reckon!  I've yet to give them an overall 'wash' and facial features, but I couldn't really wait to see what these guys looked like in pictures. 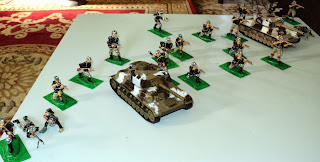 That the figures come in quite variable sizes doesn't seem to be noticeable laid out as here, with a platoon sized advance supported by tanks.  I really do wish I had bought the other two PzIVs though.  Nnnnnggggggg...! 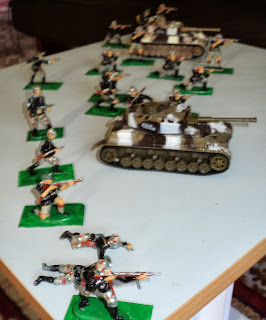 Acknowledgements:
1.   Thanks to Paul Foster (Plastic Warriors), the stuff he sent me arriving safely a couple of days ago.  Let's see: most of an Airfix Tiger I (really just the gun and mantlet needs to be found for this);  enough of an ESCI Hummel or Nashorn to have a crack at completing it; and the rocket launchers of 2 Calliope Shermans - which will most likely end up on the backs of tracks as RL technicals in the service of Tchagai.  Some interesting projects in prospect there! 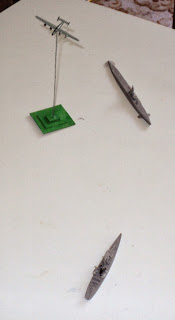 2.   Among the trove Brian (Fist Full of Plastic) sent my way a while back were some items I omitted earlier to mention.  These were Tamiya naval kits: the USS Enterprise aircraft carrier (pretty big item at something over a foot long) with aircraft, and the US Gato Class Submarine with a Japanese Nr13 Class Sub-chaser and a B25 (I think) four-engined bomber. 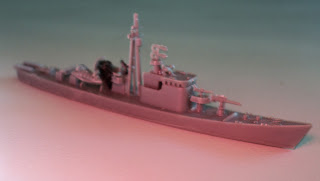 Probably the handiest item is the sub-chaser, as it could as well be used for inshore or even riverine operations.  The depth-charges might equally well be mines.  I can also seeing it in operation in several projects: my Latin Wars, in the service of Tchagai, or even on Jono's World...
Posted by Archduke Piccolo at 2:25 PM