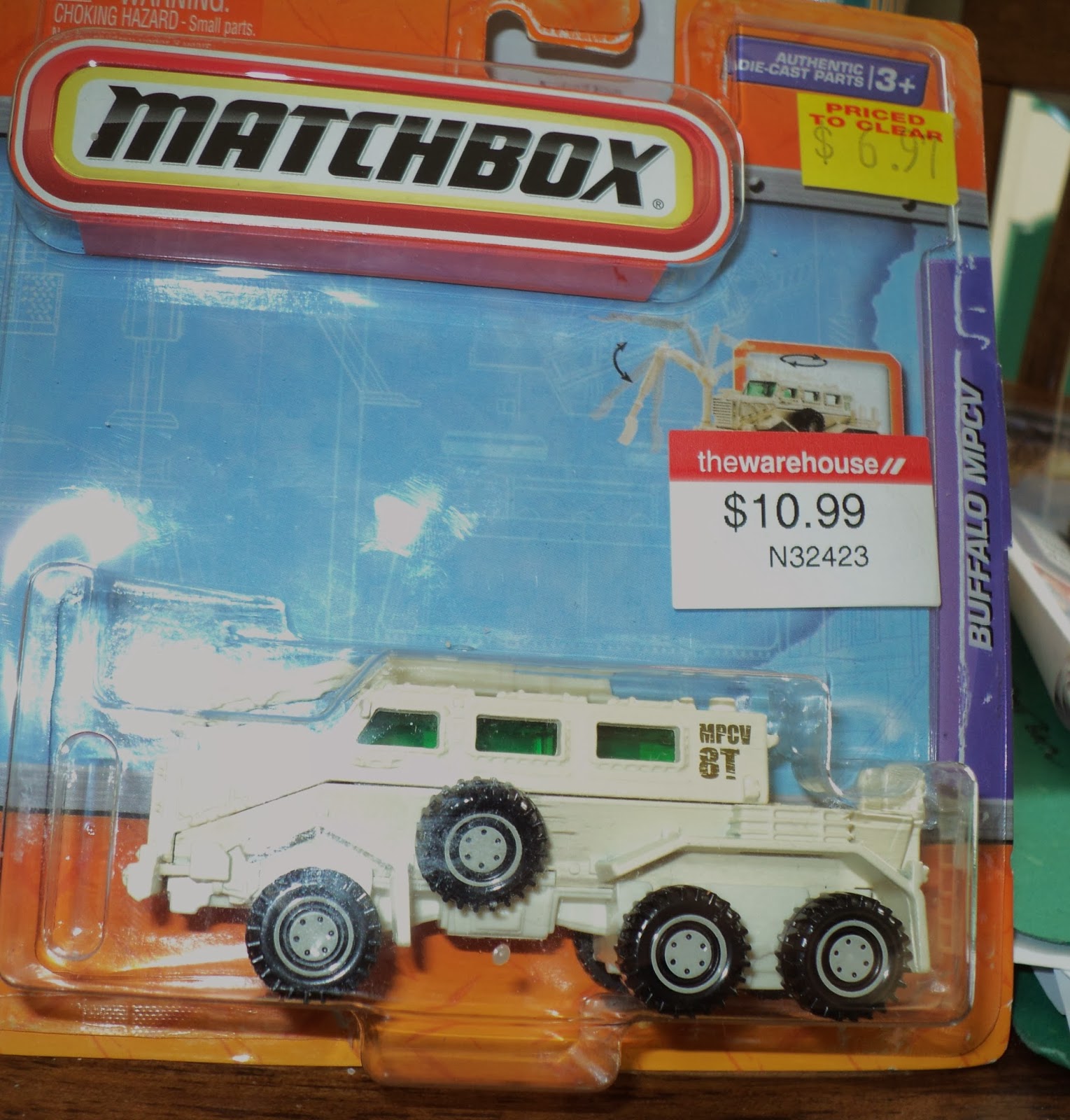 One of the benefits of reading other people's blogs, is that you get ideas that you can add or adapt to your own schemes.  Yesterday on our grocery expedition I made my occasional detour to the Warehouse toy section to see what goodies might appear.  Seeing this item separated from similar types, I recalled Evil Uncle Brian's 'Fist full of Plastic' blogspot, which featured the acquisition of a couple of Buffalo MPCV - Mine Protected (I thought it meant Multi-Purpose) Crew Vehicle.  at $10.99 I thought the price reasonable, not at first observing the 'Reduced to clear' label at $4-00 less. 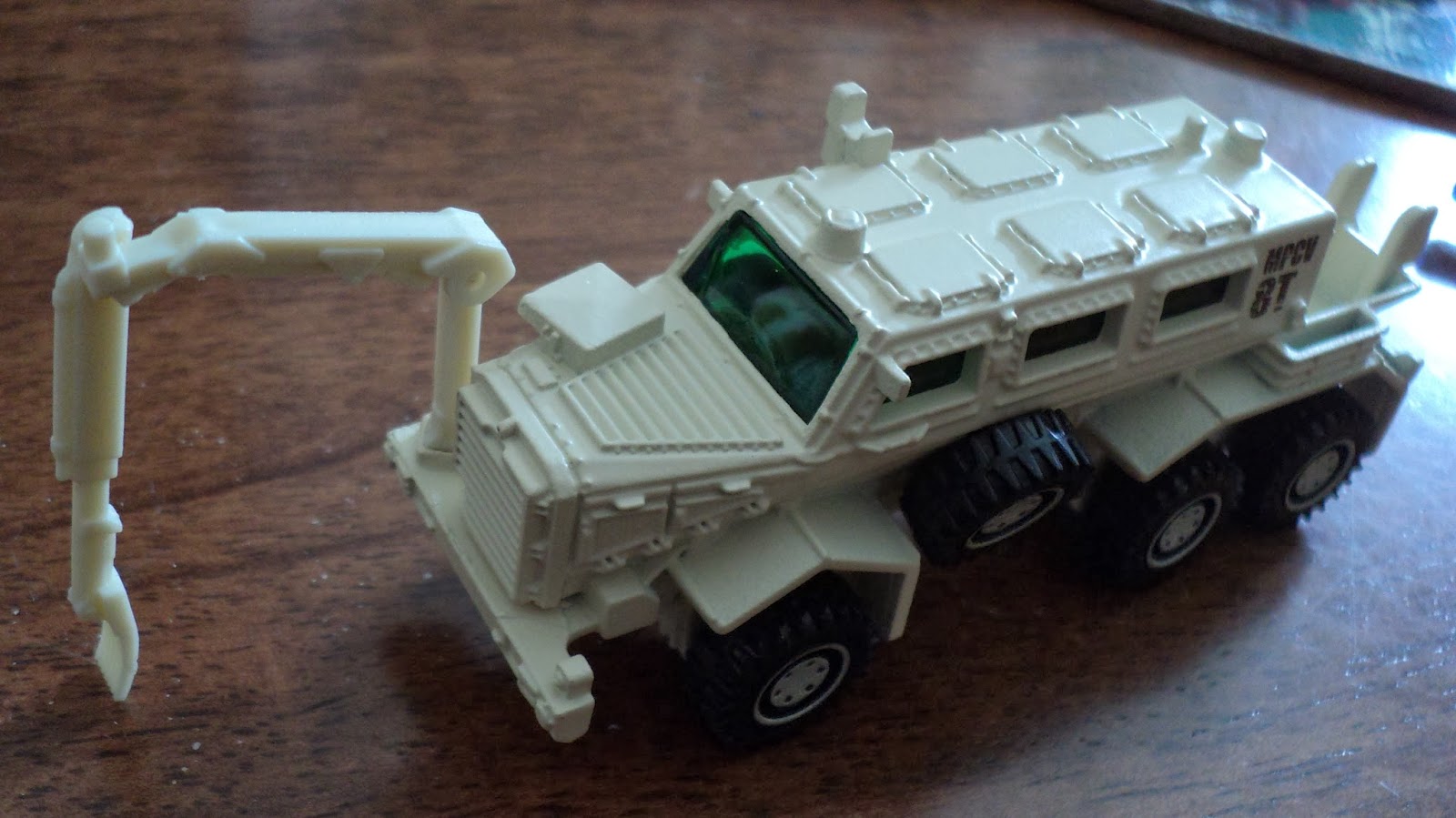 So the Army of Tchagai will have acquired a useful engineering vehicle...

Meanwhile, I was thinking that my 'Army Men' (I'm thinking of dropping the 'Jono's World' label) armies could use some battle flags.  Partly it is to add colour, but they will also be useful for identifying purposes.
Raesharn has 'rayed' flags, its Omez allies the  per saltire vert-and-gules, fimbriated argent; and the Kiivar opposition the azure and or scheme of nested lozenges and squares. 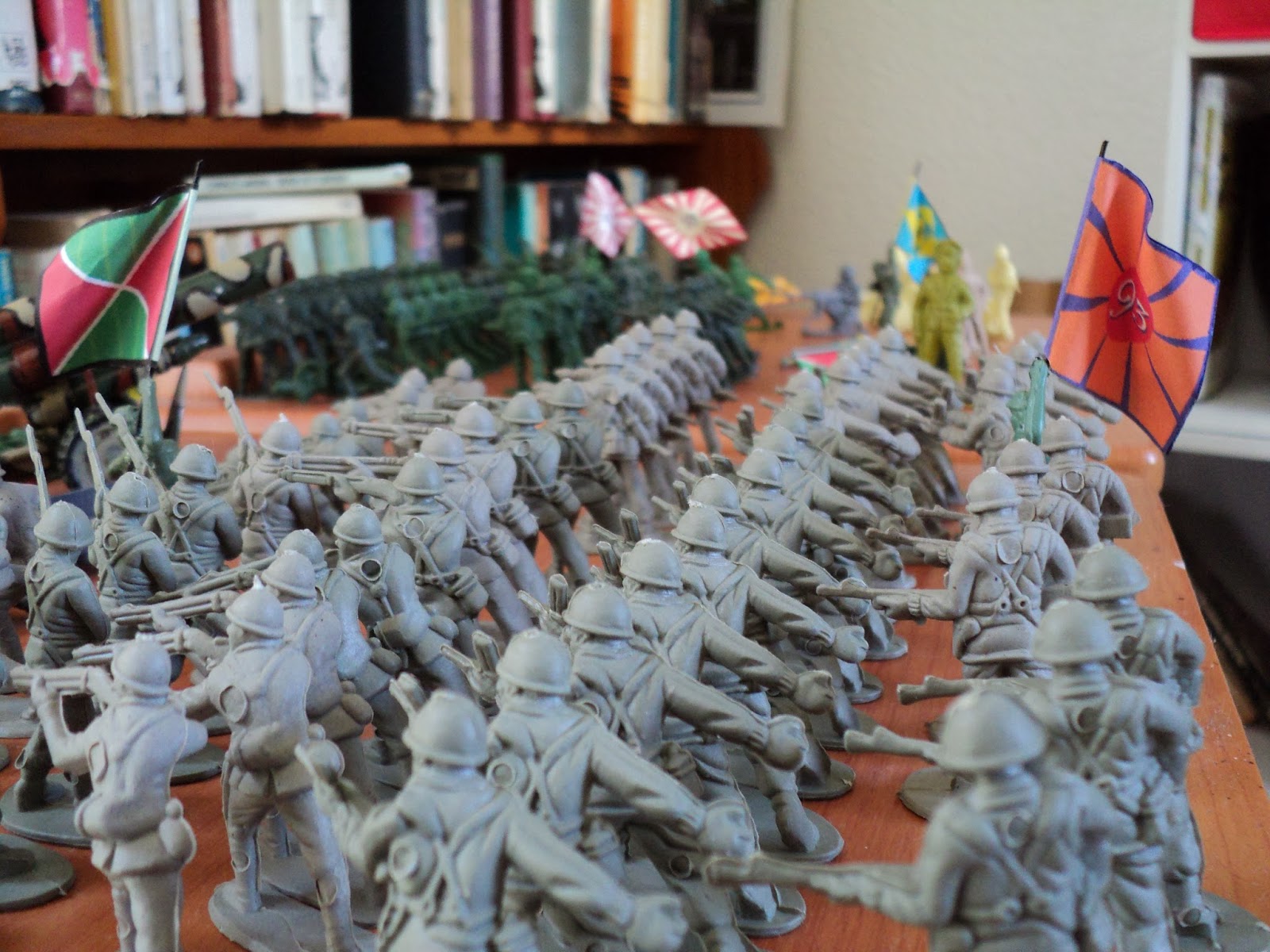 Below; the 'Red Dawn' flags of 55th Armoured Infantry and 70th Infantry.  The Kiivar flag is of the 34th Regiment. 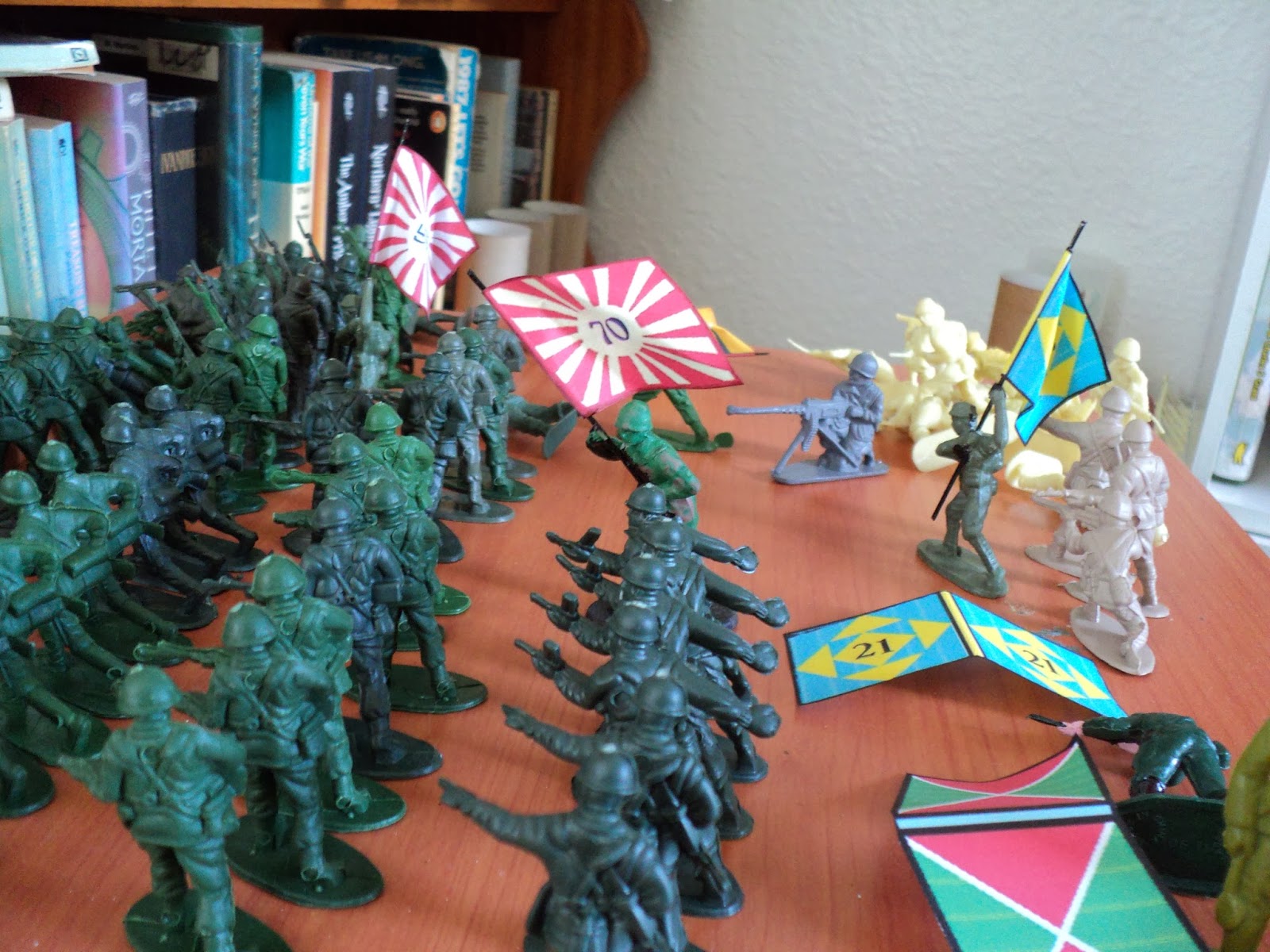 On an entirely different topic, Brian had found a use for one of my surplus Wargames Factory muskets to create an amusette.  Thinking that this was a great idea, I bethought myself to undertake the construction of one or two myself. 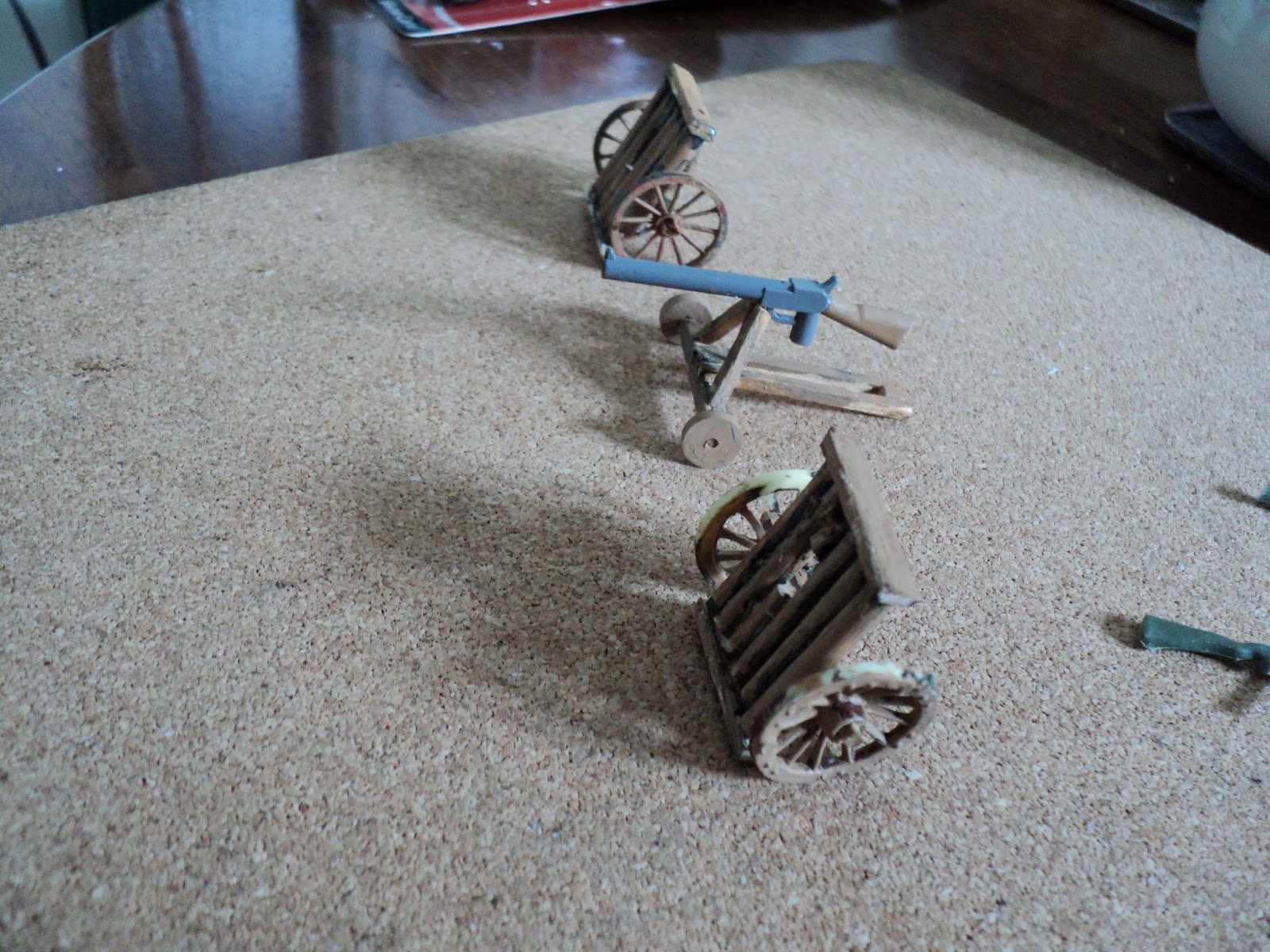 First the wheeled pavises.  Not mush to these: wheels from Airfix plastic artillery (one a Napoleonic British piece, the other from the ACW set).  The axle is a match in one case, a length of skewer in the other.  The vertical timbers are also lengths of skewer, and top and bottom of this shield 'finished' with timbers cut from a ice lolly stick.  There is no trail.  The aperture for the firearm is slightly right of centre, as one might imagine for a right-handed musketeer or jager. 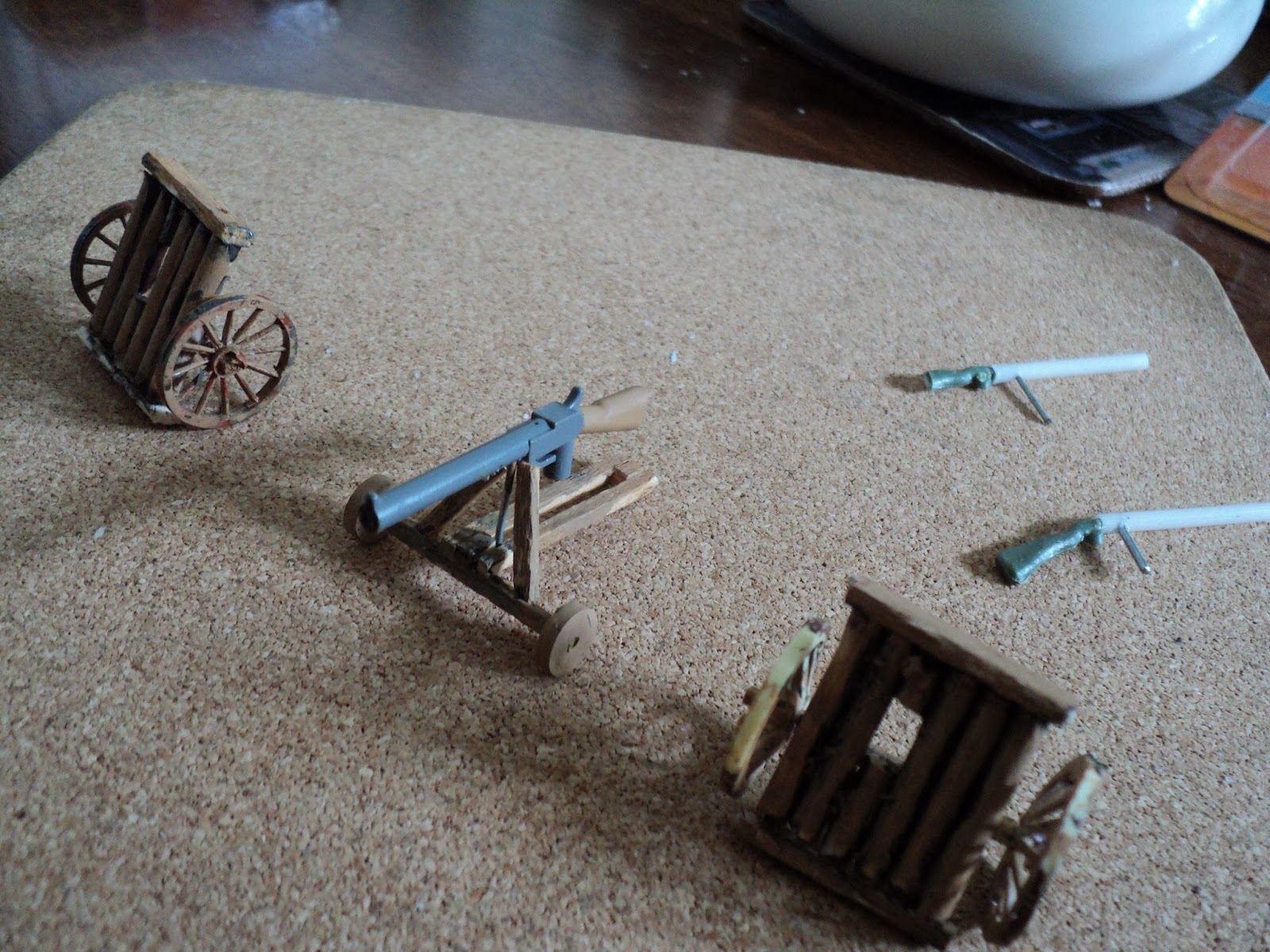 The centre piece of the pictured trio is something else, though still coming under the amusette definition, I gather.  This is a bally great firearm mounted upon a light carriage rather like an artillery piece.  The firearm is from an orphaned LEGO part that appeared in a job lot of Army Men I was given a couple of months back. True, it is over scale and looks it, yet it also looks the part it seems to me. 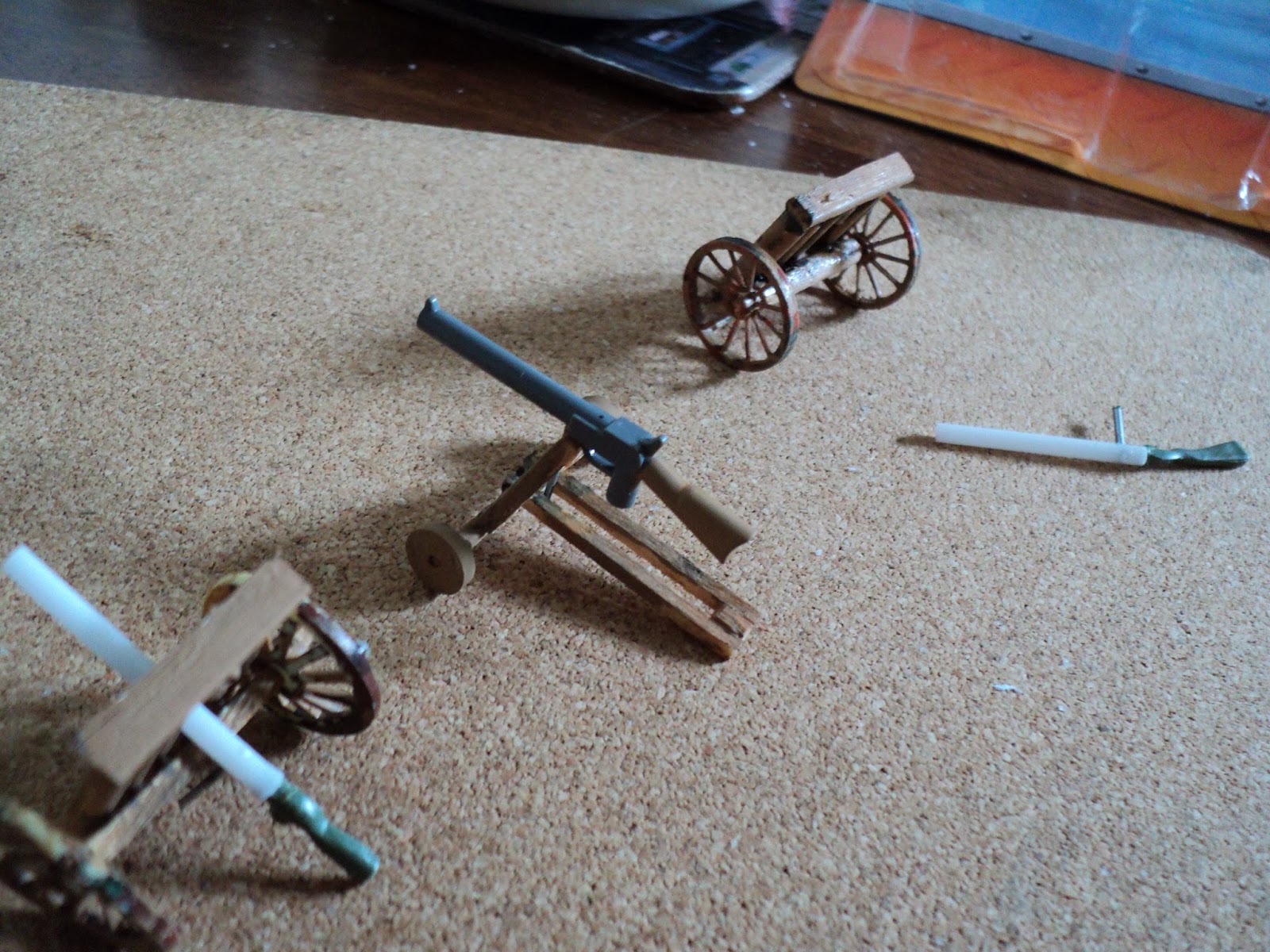 The other two firearms you see in the pictures make use of the rifle butts cut from Army Men figures to create our battle flag bearers.  The near one has had its butt shortened by half so as to be held properly by its owner.  Although the information supplied in Brian's article suggested the use of amusettes in the field, I'm inclined to reserve them for siege warfare, or for the occasional 'kleiner krieg' battle. 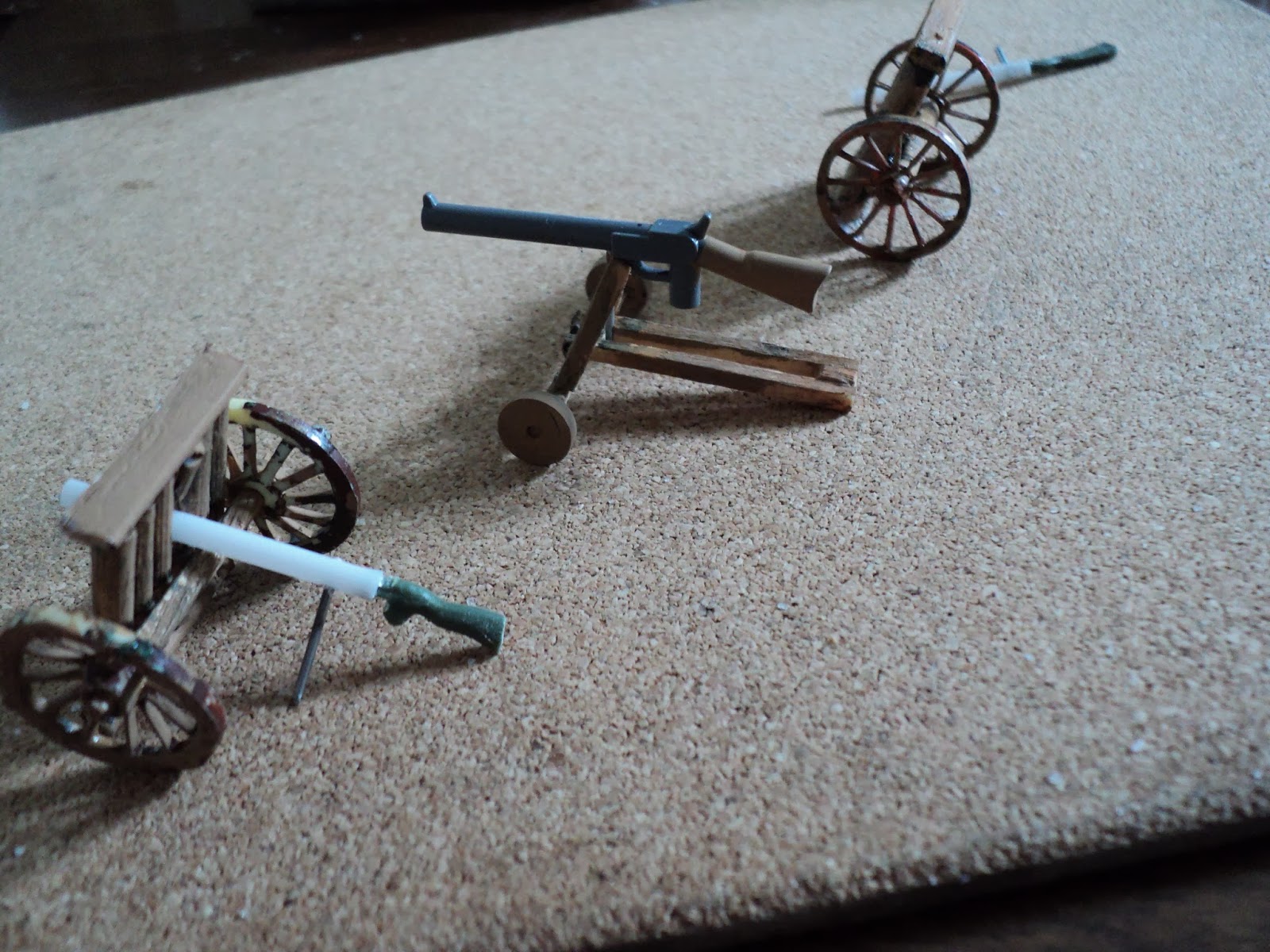 Posted by Archduke Piccolo at 5:54 PM