Big Battles for Small Tables: A question of gunfire.

The core of any war game has to be the manner in which combat is carried out and adjudicated. I thought I would take this in three phases: Artillery, musketry, and close combat.  The last of these will also subsume musketry at very short ranges, but also the effect of two sides attempting, by getting 'up close and personal' to intimidate the enemy into making off towards the skyline.

One of the problems I tend to associate with quite a few rule sets designed for large-scale battles, is the apparently vast numbers of cannon you seem to need.  An example is Age of Eagles, an admirable and well-researched rule set. A scenario like Quatre Bras (in the rule book) is actually quite manageable - involving, all up, 576 foot figures (144 stands),  98 horsed (49 stands) and 16 guns - each gun representing a company-sized battery of 6  or 8 cannon.

Personally, I think that is a highish sort of ratio of model gun per figure on the war games table.  But one has to bear in mind the 15mm scale, and the whole game design.  I'm having to design my set for 25/28mm figures in the same kind of space.  I could, I suppose, simply mount infantry in pairs and cavalry singly on the 15mm-scale bases (with some trouble in the case of the foot), but then the gun-to-figure ratio gets really weird (288 foot, 49 horse and 16 guns... not a good look, for mine).


But the fact is, I simply don't have so many cannon.  My initial thought was simply to state that one model cannon would represent the Army Corps inventory, with each crew figure counting as eight guns.  A French cannon piece with a crew of 4 figures represents a total of 4 gun batteries of 8 pieces each: 32 cannon overall.  It turns out this is a very flexible method.  A crew of three figures represents a 24-gun inventory, two figures only, 16.  You could then represent a company-sized battery by a gun with a single crew figure, though, to be honest, I would prefer to keep two, even if one is a 'supernumerary'.
Now, for a number of reasons, I want to place my cannon on triangular 'profiles', not fixed thereto, the profiles remaining separate (you could call them sabots, I suppose).  My profiles are 7cm wide by 7 deep (though I now wish I'd made them 3 inches wide and deep - too late!  The immediate problem I had to consider was how long a front was presented by a battery of cannon.  The Age of Eagles rule set allowed 3/16 inch per historical gun, which translates to a 1.5-inch frontage for an 8-gun battery - that is 180 yards.

That seems to me rather a lot of room, and some wider ranging research suggested this sort of dispersion had something to do with the turning circle of the long French caisson. Other figures were quoted here and there, without leading to anything I could regard as definitive, but which seemed to indicate that a 180-yard frontage for an 8-piece battery was more than usually generous.   Now, Terry Wise mentions in his Airfix American Civil War rule set that a 4-gun CSA battery occupied some 55 yards of front; a 6-gun Union battery 82 yards.  Fascinating choice of numbers, this: subtract 1 from both, and the ratio 54:81 is the same as the number of pieces, 4:6 (2:3).  Staying with this, an 8-gun battery might well occupy 108 (109) yards of front, 16-guns - 216 yards (217); 24 guns - 324 (325) yards; 32 - 432 (433) yards.


Well, my 7cm frontage at 1:3600 ground scale represents only 252 metres - 280 yards - enough to accommodate 20 or 21 cannon only, using Terry Wise's system.  There is a way to extend the frontage, though not, as you will see later, the arc of fire.  Now, the gun crew figures are not intended to stand upon the gun profile itself, but in contact alongside, as you will see from the pictures.  Stand a figure at one of the front angles, will extend the battery frontage to 8.5cm (scale 306m or 340 yards), and another at the opposite corner extends it to 360m or 400 yards.  Not quite 432, and a 3" frontage would have brought us closer, but on the whole I regard this as sufficiently satisfactory as to run with it.

Just as well, for the 7cm size stands was chosen originally with aesthetic considerations in mind.  I did not want the piece to be 'lost' on a stand too large;  preferred a size that would enable to place the crewmen close by the piece but not on the gun stand itself; and wanted the angles to indicate the arc of fire.  Having said all that, I am considering making smaller profiles for guns representing single batteries, as an ad hoc measure.  By the by, a park of 4 x twelve-gun Russian batteries, say, would be represented by two guns each with 3 crew men.


As indicated earlier and in the immediately preceding diagram, the frontage added by the flanking crew figures to accommodate the 32 guns on the ground, does not change the arc of fire.  This is quite frankly a matter of convenience.  I don't want 10-cm wide bases.  But I also imagine that the broader the battery, the less capacity - relatively speaking - it has to angle its fire to a flank.  A good deal of this I accept is arbitrary, but is intended to subsume the limitations of Napoleonic artillery concerning target selection.

Having chosen my battery scale, it remained to decide whether each cannon piece represented artillery in general, or the size of ordnance the piece itself represented.  My first thought was to keep it simple - each piece being treated the same.  But as my armies do have cavalry formations (especially my French Heavy Cavalry Corps), and as heavier calibres tended to be held as Army rather than Corps equipments, it seemed appropriate to separate the capabilities, at least in terms of ranges. At that, I seem to recall reading somewhere that the French never - or hardly ever - employed the heavier 12pr guns and 8-inch howitzers in Spain or Portugal.  I stand to be corrected on this, as with anything else, but given the types of terrain often fought over in Spain, that seems a plausible enough story.

So ordinance will be designated 'Light' (which will include 'Horse'), 'Medium' and 'Heavy.'


Light pieces; 3-4 pr guns, and 'light' 6pr.  The British and the Prussian 'light' (horse) 6-pr guns had shorter barrels than their 'medium' (foot) 6pr, and its ammunition more suited to its light or horse-artillery role.  Also include the type of howitzer used with such batteries (e.g. the British 'light' 5.5-inch, Prussian 7pr).

I will leave it here for now, and look into the question of fire effectiveness next time.

Further Work in Progress:
Here are a few pictures of my very fudgy and anachronistic British and Spanish units: 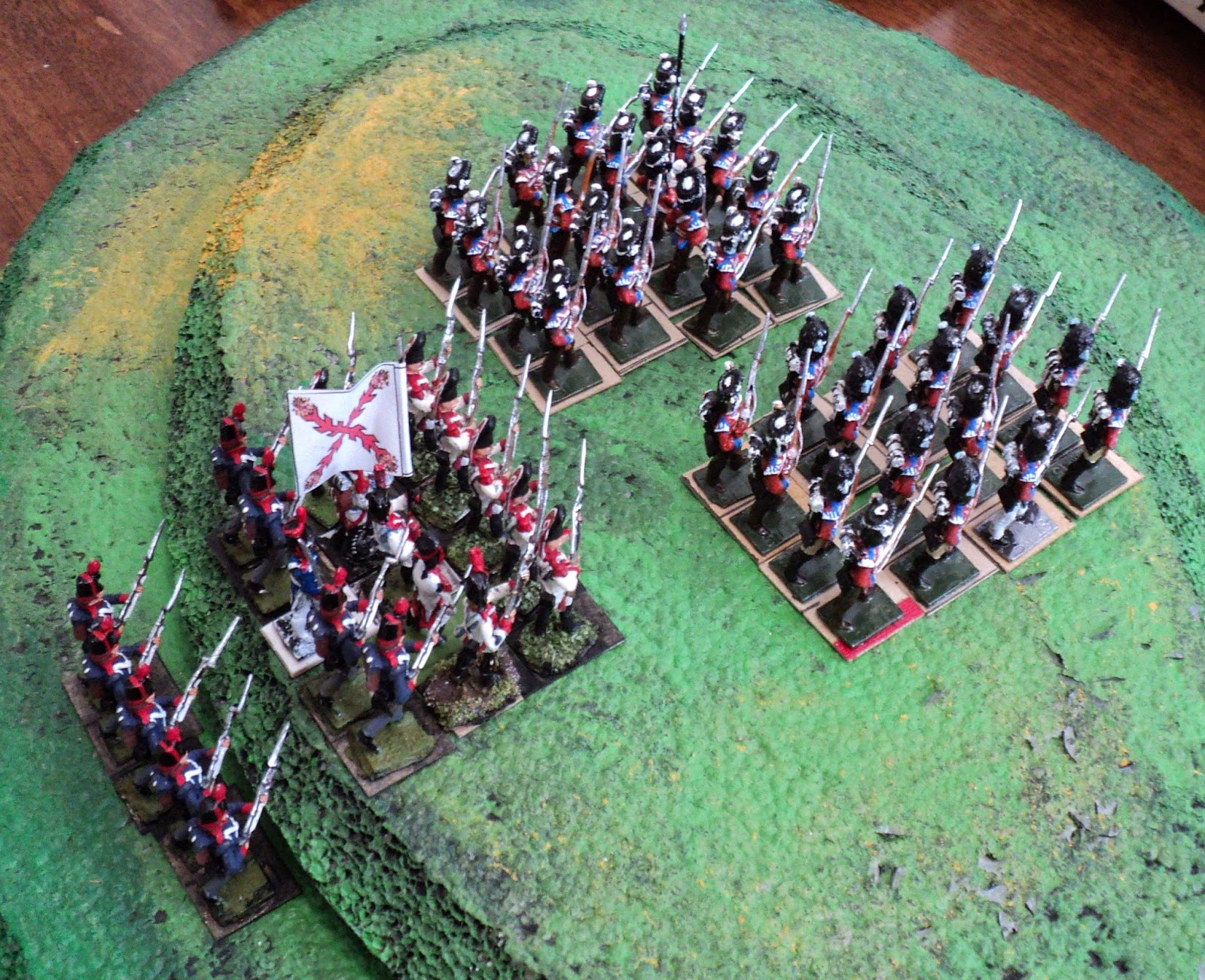 Very much still WIP - but already looking like something.  These were obtained in a bring-and-buy several weeks ago.   A rather more ... erm ... eclectic collection than I realised at the time. 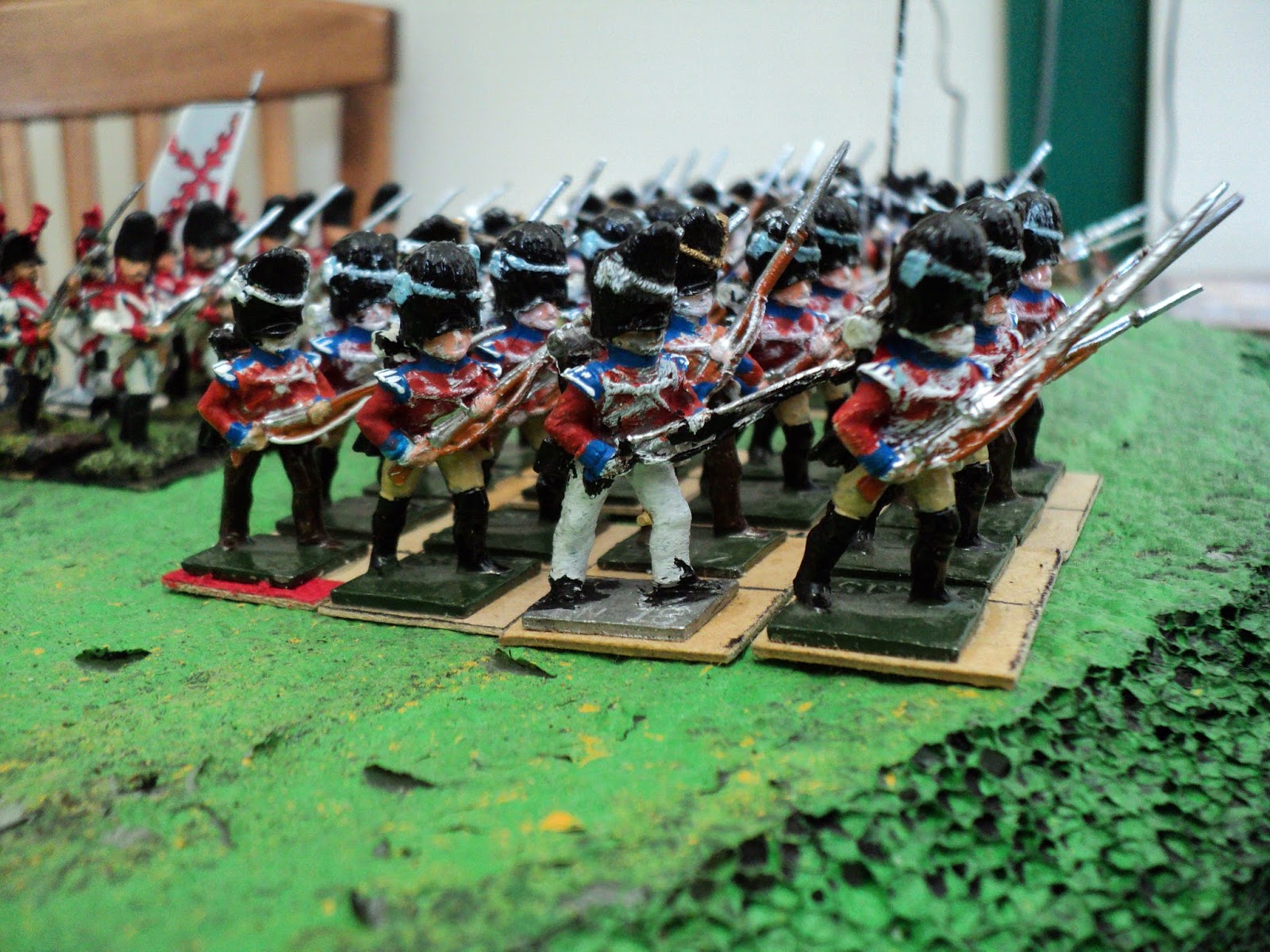 It turned out that most of the figures sold as British 'Guards' were actually Fusilier figures from the Minifigs range, distinguishable by the discerning and knowledgeable (i.e. not me) not only by the shape of the bearskin cap, but more particularly by the patch ('bag'?) at the rear.  That would have been fine, but only 10 of the 34 figures (33, actually, but I had a spare fusilier figure lacking a bayonet to his musket, now rectified) were Guardsmen.  What I have done for the time being is to form these guys into two units, one of 18 figures, the other of 16.  The genuine guardsmen have gone into the smaller unit.  As it happens, that unit is lacking command figures.  I hope in the fullness of time to add more guardsmen and guards officers to that unit, and transfer the supernumerary fusiliers into the other. 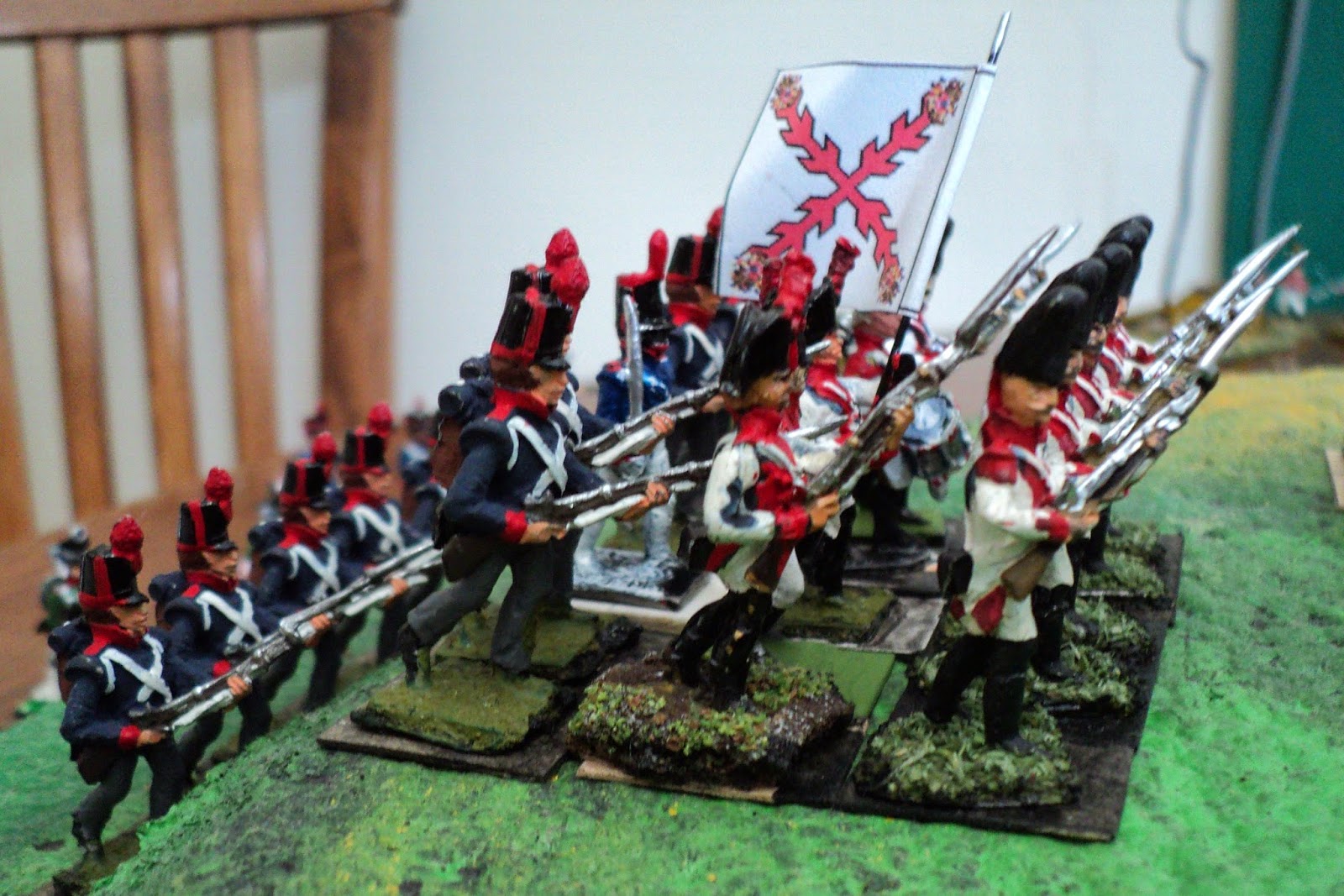 The Spanish unit, meanwhile, is a mix of 1808 Grenadiers and 1812 ... Line Infantry(?).  In itself, it doesn't look too bad at all.  I guess in the end I'll just have to live with its 'wrongness'.   As I rather like the distinctively Spanish look of the 'ruguly saltire' that was the flag design chosen for this unit. Often I like to alter the downloaded image from oblong to a parallelogram (using the 'skew' feature in Windows Paint), but as the staff is held very nearly upright, I didn't trouble.  All the same, it is a practice I recommend highly, even for upright flag staffs.  For those held at a marked angle from the vertical, 'skewing', in my view, is a must.  Just for variety, I'll vary the skews from a mere 5-degrees to as much as 15. 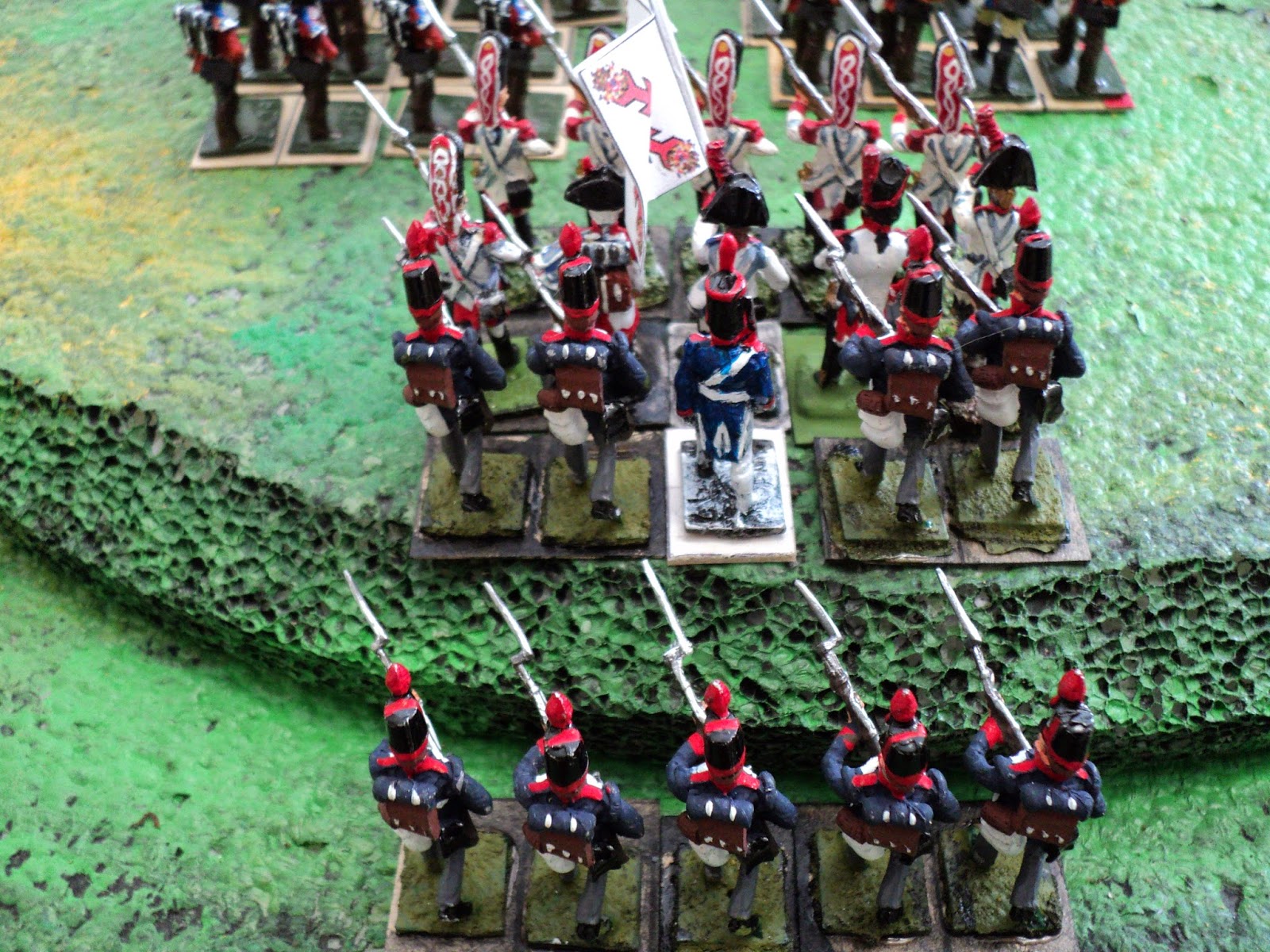 The acute observer might have observed the marked sheen on the musket barrels and bayonets.  It's a 'thing' I have about gleaming bayonets. Very Freudian, I dare say. To achieve this effect I mix silver with gloss black.  It so happens this particular batch was a bit lean on the black.  Several years of experimentation with this technique has indicated that it works best with Humbrol enamels - I've never got it to work so well with acrylics.  This 'gloss black and silver' concoction I use for anything purporting to be burnished metal or iron or steel weaponry.  It is simple, requires no outlining or dry-brushing, and looks good. 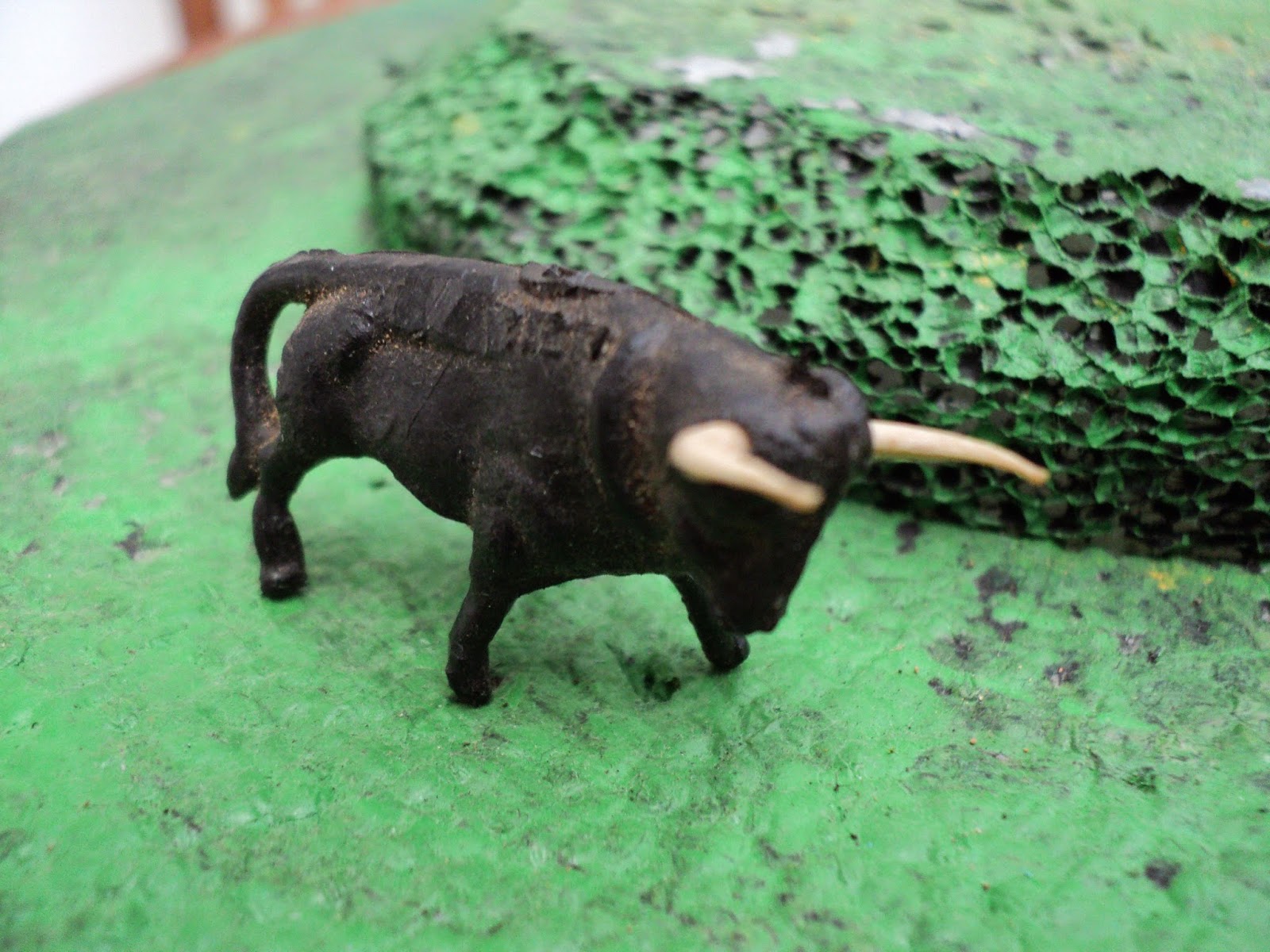 On a totally unrelated topic, the 'Lonely Bool' depicted alongside is from a bottle of Sangre de Toro vino from way back when.  It has been sitting in a drawer for decades, gone through five or six changes of abode at least, including a move to another city.  High time it found useful employment ... pulling a cart, say. My armies need logistic elements...

Posted by Archduke Piccolo at 3:19 PM