By The Deep, Six!

A very welcome phone call from Brian last week resulted in my receiving through the letter box a pile of much appreciated additions to my Army Men Project.  I was told about the jeeps - turns out there were 24 of these.  But one or two other interesting items snuck in as well.  Although underscale compared with the largest of my Army Men, this is all to the good.
Brian assured me that the alternative fate of these vehicles was to be garbaged, thrown out, discarded, made redundant ... well, you get the idea.  Tossed aside as surplus to requirements.  Ever the softy, I accepted their refugee status and have found them a home...   Nine or ten of these will fetch up as transports for my Kiivar Recon Group infantry platoon, and 3 men per jeep.  The Group will then comprise an armoured car company of 5 vehicles, a HMG technical platoon of 2 MG mounting buggies, an infantry platoon mounted in jeeps, and some support weapons, of which more anon.


Meanwhile the above picture depicts what will probably be the equipments of a Raesharn rocket battery.  These will have to be a little 'down tech' from more modern missilery, and more cognate to an extra large 'Katyusha' rocket.  Its size might be explained by the huge payload.  I'll have to write special rules for these.  I'm thinking:
1.  One-shot deal per rocket, per battle.  Probably, at that, fired in salvo.
2.  Not hugely accurate.  Artillery grid applied for each rocket, instead of for the battery as a whole as for guns, howitzers and mortars, and always on the 'Indirect Fire' grid.
3.  ...But woe betide anyone in its 'beaten zone.' Counts as heavy artillery, and 'Heavy Anti-Tank' for any armoured vehicle covered at least partially by all four central 'on target' squares of the grid.  Not too flash, neither, for bunkers and such that are similarly placed.

The column comprises a command vehicle, comms vehicle, and two rocket tows with their twin launchers.
Also included in the package were 5 of these interesting pieces of equipment.  It is hard to work out what scale they are meannt to be, but they seems to be AA weapons.  The guns seemed a bit dinky for my Army Men scale, so two of them have been replaced with something more gun like as in the pic below.  These are to be AT/AA Dual Purpose guns.

The temptation is to to take the gun bits off the trails and place them on jeeps as portee mounted DP guns, then using the trails as the basis for infantry guns.  I'm still thinking about that.  At least one of these will be added to the Kiivar Recon group. 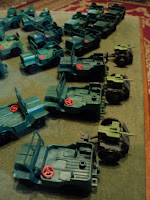 Among I think four hard plastic figures that I will discuss another time, this sword-wielding fellow appeared. Having nothing else in this line in this scale, I was a bit at a loss what to do with him.  But then it occurred to me he could be a statue (Pigeon latrine) of some well remembered, long forgotten nobleman.
Apart from the splash of Nuln Oil he has received already, and a suitable plinth, there he is as he will continue to be: Vicomte Hughnon de Hautemerde, depicted in the last moments of his rebellion against Louis X.  Or maybe it is Hermann Graf Slingburger of Bavaria offering terminal defiance to the House of Wittelsbach.  Or could it be Sir Willoughby Wibton of Wibshire, offering defiance to the Genovese crossbowmen at Agincourt? My, they don't make 'em the way they used to...

Posted by Archduke Piccolo at 11:03 PM