"Attentive to our duty" - a naval interlude.

In a recent posting in his blog spot, Bob Cordery mentioned the possibility publishing a further volume on Developing the Portable Wargame (working title).  The subject of naval war games was to be included in this volume.


This sounded intriguing enough for me to inquire further into this.  In response, Bob kindly sent me a copy of his naval war game rule set as they presently stand.  Well, we had a few goes last night as I gradually sussed how the game worked.  For some reason I thought the gunfire was adjudicated 'per gun', which had two interesting, if amusing, effects.  One: the actions were extremely short.  Two, imagine a nine-gun battleship firing 72 dice at point blank.  Yeah.  Right.

Clearly I needed to reread the rules, but I quite like the 'per gun' notion, if it could be made to work.
The COW report that accompanied the rules mentioned a scenario in which a couple of armoured cruisers attacked a convoy escorted by a protected cruiser and a flotilla of torpedo-boat destroyers. My first pass in fact had two protected cruisers attacking an armoured cruiser and two destroyers protecting a couple of merchant vessels.  Some superb gunnery put the armoured cruiser under, but one of the attacking ships went with it.
After the first passes, I had another at the original scenario.  The opening arrangement was unclear, so I imagined the attackers approaching from the same direction as, but on a converging course with, the convoy.

The Raesharn response was probably too precipitate, as a sudden change in course by the Kiivar ships caught the Mastodon isolated from the destroyers, and under fire from both.  Considering the superior range and weight of metal of each of the Kiivar vessels over the single Raesharn cruiser, the latter could have come off much worse that it did.  Taking six hits herself, Mastodon inflicted four on Virago. 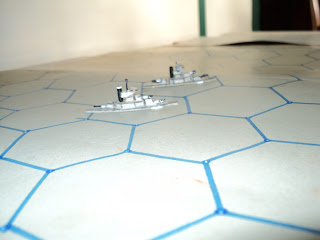 Even so, this could not last.  It would be some time before the destroyer flotilla could intervene, in circumstances that might - but for events - have led to Commander Yamazuki's court marshal.  (First move being diced for, Raesharn moved first in the game, but the moment the toss went the other way, that would be the cue for the Kiivar vessels, with two moves in a row, to slip in behind the escort and isolate the solitary big Raesharn ship.  The destroyers were caught too far away and heading in the wrong direction.) 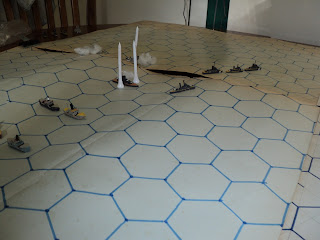 Heroically covering the rear of the slowly fleeing merchant ships, once more the overmatched Mastodon came under heavy fire. She scored a few damaging hits upon Termagant but succumbing to a welter of 8-inch shells, went under in a matter of minutes.


After this disaster, it seemed that the convoy lay at the mercy of the Kiiver squadron.  But racing back came the destroyers, T62 far ahead of its companions.
The gunfire from the Raesharn ships was not enough to stop T62 from closing to torpedo range. Three hits into the larboard side were enough to put Virago in a sinking condition.  Down she went. But its success did not save T62.  Reduced to a complete wreck in moments, that destroyer also slipped beneath the waves.

The demise of T62 was followed quickly after by that of T63, with hardly any further scratched to the paintwork of Termagant. That fast-moving cruiser managed momentarily to keep out of torpedo range of the remaining Raesharn destroyers, but in going after the merchants, allowed the escort vessels to close again. Concentrating the main guns on T61, Termagant trained the secondaries on Allswell. The destroyer also disappeared among several explosions, but the merchant suffered only minor damage (2 hits).   Then two torpedoes slammed beneath the port-side belt armour of Termagant - the vengeance of T61.  There would be no court marshal for Cdr Suzumaha. 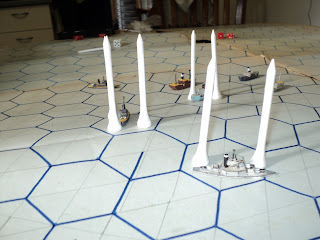 Termagant continued to circle the merchant ships, like a wolf after sheep.  The wheeling ships and the determination of the sole remaining escort, T64, prevented the cruiser concentrating its fire upon any one steamer.  Ben Betterhof was reduced to a wreck, but remained afloat and under power; and a few fires were started aboard Dammital as well.  But the main armament had to be reserved to fend off T64.  That vessel soon joined its companions in Davy Jones's locker, but a final torpedo hit persuaded Termagant to break off the action.
The escort had saved the convoy, but barely, and that at the cost of all five warships.  But the attackers had lost a valuable warship of their own.  It chances were problematical of anyone making the journey to safe harbour. 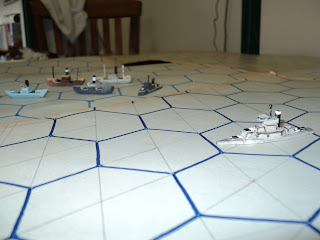 That was a pretty even and hard fought action, with heavy loss on both sides, but an indeterminate result.  Now, although my navies are more cognate to early WW2, but with fewer 'types' - or different - ships I played this action 'per spec'.  There are some comments I would make at this point.  Bear in mind these are off the top of my head after just one proper 'play test'.


1.  It is tempting to suggest making the results of torpedo attacks more chancy, but perhaps more lethal when they do strike.  A possibility: 3 dice as now if fired from abeam of the target, 6's to hit, 1D6 damage per hit.  If fired from ahead or astern, 2 dice only with the same probability of hits and damage.  As now, 4 torpedo attacks maximum per destroyer or other torpedo carrying vessel.
2.  What are the practicalities of adding a little more detail in terms of critical hits affecting guns, command, motive power and steering?  It is true that such detail makes for a deal more complicated bookkeeping, but would they add anything to the game?  Would they add anything to the narrative? Something for me to think about.
3.  The concept leads to a very playable game judging by my very brief acquaintance. Can they be modified by a supplement adding aircraft, carriers and submarines?  Or are we looking at a series of separate, or maybe modular, rule sets?
4.  I still like the 'per gun', which seems possibly more appropriate to the 'post-Dreadnaught' era.

Posted by Archduke Piccolo at 6:01 PM