The Hunt for the Bey of Bassorah - The Battle.

As Colonel Redfers Carmine's column advanced deeper into Medifluvia, they saw not a sign of anyone who might oppose the march.  A few distant camel riders might stop and observe them for a few moments, before riding off into a disappearing cloud of dust.  Presently the Ruberians came upon a stretch of country dotted about with low hills and stands of palm trees.
Not ideal ambush country, this, but not to be discounted, neither; Col Carmine arranged his troops in two columns.  His sole cavalry squadron led the right, two rifle companies following, and the artillery half-battery bringing up the rear.  The placed himself at the head of the third rifle company and the Gatling detachment forming a parallel column to their left.
In what follows, I won't be offering a blow by blow account - just a general flow of events. 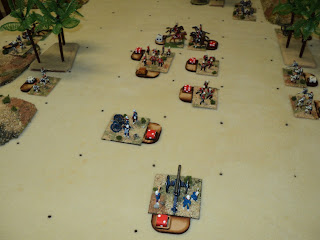 The Ruberian cavalry, scouting ahead, suddenly came under fire from the Bey's cannon,  Their attention thus drawn northward, they were surprised by the sudden onset of the Bey's sipahis, scimitars a-glint, slamming into their other flank.  That is to say, after their artillery salvo, the Turkowaz 'won' the initiative roll.    This cost the Ruberian dragoons a strength point, after which, however, they were able to swing around to confront their assailants. 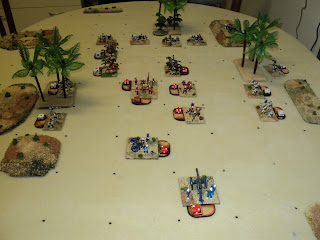 The gunfire was, of course, the signal for the Bey's entire force to come surging out from cover. There was nothing sophisticated about his tactics.  'Swarm and swamp' just about summed it up.  In response, the rear units in the Red column swung outwards, the whole force forming three sides of a rectangle.  All three were coming in for a crackling rifle fire. 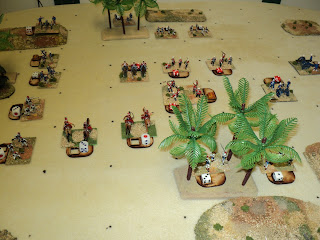 Coming to the aid of his dragoons, the gallant Colonel Carmine led a company, bayonets fixed, into the flank of the sipahis battling them, forcing them to break off with heavy loss. 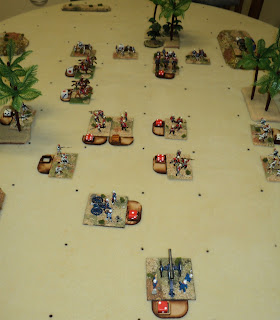 It was not long before the Bey was wondering whether. in opposing this Ruberian expedition, he had chosen the path of true wisdom.  Ruberian firepower seemed to be gaining the upper hand.  His leading band of sipahis had been flung back.  Those accursed machine guns were decimating one of his levy bands on the south flank, whose attack was not helped by the delay to their friends having to clamber through a stand of palm trees. 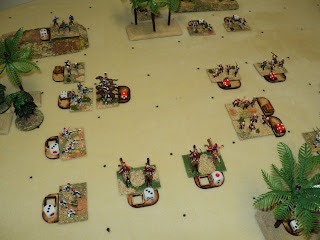 The north flank attack seemed to be doing no better.  Faced with the loss of a third of their strength, one band had to choose between hanging on against the odds, or falling back.  Appreciating that to fall back simply meant taking his people beyond the range of his muskets, whilst still under fire, the tribesman's chief growled his men to stay in the fight. 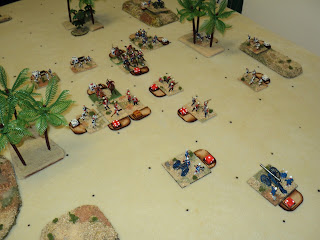 It is true, though, that the early exchanges were going against the Bey.  After two or three bounds of firing, the Turkowaz had lost six Strength Points to the Ruberian two!  The latter was now not much nearer its 'exhaustion point' than their assailants.  Shortly afterwards, the Gatling section, having shredded their attackers looked about for fresh targets,  On the north flank one of the levy bands was also driven out of the fight.  Lacking targets, the artillery felt it could do nothing better than to engage the Turkowaz artillery. 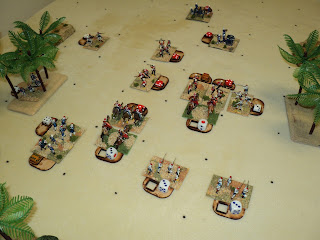 It was the close quarter fighting to the front of the column that was holding them up.  No sooner had the company Colonel Carmine was with driven off the enemy horse attacking the dragoons, when they found themselves attacked in quick succession by more enemies.  Bursting through the palms, the second levy band attacked Carmine in flank.  Turning to face these fresh opponents, presented their other flank to a fresh body of sipahis.  From now on Carmine was in a battle for survival. 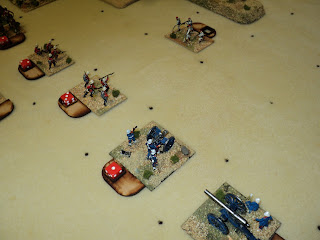 Nor could he expect much help from his other troops.  There remained just enough pressure from the northern flank and from in front to tie down all who might have come to his aid.  That he still had unengaged levy impatiently awaiting an opening to attack the head of the infidel column served to encourage the Bey in his battle. 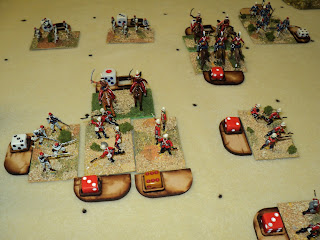 But Carmine and his company were not going down without a fight.  at great risk to himself (I had to roll at least three times to determine his fate) he kept his dwindling band in the fight.  The enemy, too, were feeling the effects of the close quarter struggle. 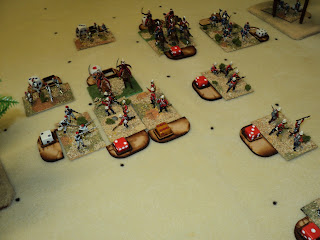 Having driven off their immediate opponents, the dragoons, were to find themselves with enemies on three sides.  With no available line of retreat, they burst forward, hoping that by breaking through they might yet escape the peril.  It was to be a death ride.  Though they inflicted some loss upon the enemy, there was to be no escape for the dragoons. 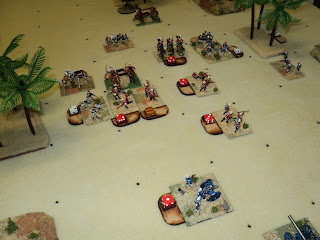 In its battle with the southern flank levies, the Gatling section had taken considerable loss.  Lacking targets, they began to swing over to the northern flank, where the two rifle companies were by now just barely maintaining a line (One had been reduced to 1SP, the other to 3).  In fact, Carmine's whole command was by now much reduced - enough to reach its 'exhaustion point'. 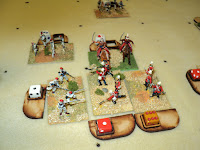 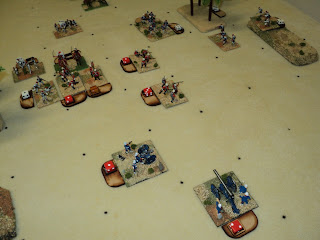 The exhaustion point having been reached the Ruberians could, according to the rules, make no aggressive action, and therefore the Dragoons ought not to have made its bid to escape.  I simply forgot to check the situation betimes.  In fact I forgot that the exhaustion point might already have been reached.  But apart from the Gatlings joining the rifle companies facing northward, the Ruberians were to undertake no other aggressive action. 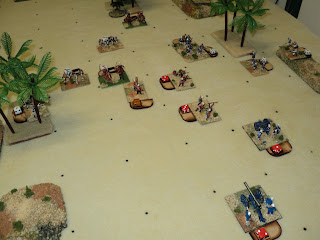 At last flinging off the attack from the southern flank, Carmine seemed able at last to turn his full attention to the sipahis still attacking him.  But he was also aware of approaching Turkowaz tribesmen coming to the aid of their comrades. Worse, there was nothing left of the company he had personally led against overwhelming numbers.   It was becoming apparent, even to him, that his column was not going to reach the Bey's Provincial capital this trip. 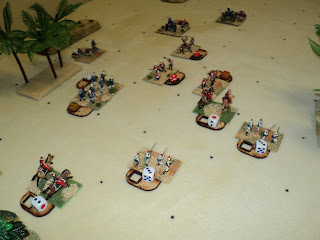 At this point the Bey called off his attack.  His own force had taken considerable punishment, and was also about ready to quit the field.  In fact it too had at last reached its exhaustion point.  Having got this far, I totted up the SPs lost: Ruberians 12 out of 25, Turkowaz 14 out of 40. 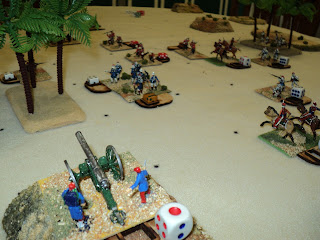 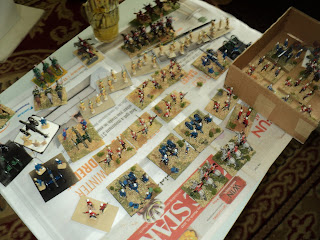 Although the butcher's bill gave the honours to Ruberia, there was no doubt at all who had won the victory.  The Bey could sip his coffee with the added pleasure of knowing his capital was safe.  His tribesmen had fought well.

Below and to the right are a couple of pictures of my 19th Century RED (Ruberia) and BLUE (Azuria/Turkowaz) armies as work off and on in progress.  In the above game, the units had the 'feel' of companies, and Carmine's column roughly a battalion in strength - three rifle companies and a Gatling section - reinforced by a squadron of dragoons and a troop of artillery.  In raw numbers they were probably outnumbered 2 to 1, but of course the superior firepower of the Ruberians made up for some of that. During the game, I thought I might have got the play balance wrong, but it proved pretty well right.
But I am by no means limited to this.  A 4-figure rifle stand might equally well represent a regiment or brigade, for a whole different type of game. 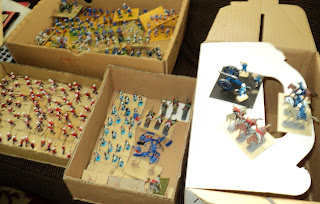