I began a reply to Neil Patterson's comment upon my previous posting then discovered I was writing a follow-up article.  So I transferred the bulk of it here. 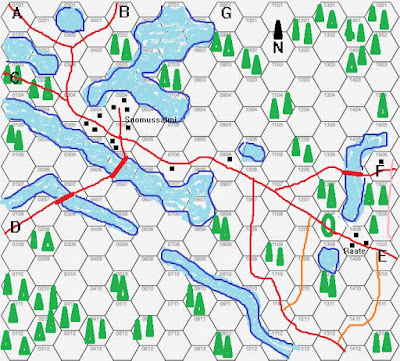 "This scenario, when played, will be very much cobbled together: the 'Finns' will be Germans, and the snow covered forests and fields will have a decidedly 'any other season' look... "

I'm basing my OOB loosely on Tim Gow's, but modified by what my researches indicate.

The temptation is to begin with the 163rd Division (81st and 759th Regiments, with maybe a battalion from 662nd, depending upon where the 163rd Div commander had ensconced himself) attack on the Suomussalmi garrison, the ROII - a border police unit 58 men strong.

Being so small, it would have a SP=0, but add 1 for defending a built up area (a thought).  But probably the best approach would be to begin at daybreak of 11 December 1939 with the Finnish attack upon the Suomussalmi-Raate road upon the length of which, stretching back from the former place, lies the 163rd.

At this point the 27th Finnish Rgt, plus a couple of local units, had practically no support weapons: no AT, no AA, not even any arty.  They did receive some later, ancient pieces of ordnance but welcome for that, and precisely two AT guns.

I am following Robert Edwards's narrative, here.  A number of scenario-specific notions suggest themselves

1.  It is clear that neither side was very well equipped.  The Finns lacked AT, AA and Arty.  The Russians had some support stuff, but generally, especially the 163rd, weren't a whole lot better off.

2. The Russians were not at all enthusiastic, from the Divisional  leadership on down.  The 44th was considered at the time something of an elite or crack unit.  It was not, even though, as Tim Gow's OOB indicates, it was a cut above the 163rd.

3.  Neither of the Russian Division commanders were up to much - "not a master of his subject" was how R. Edwards describes the commander of the 163rd.  Contrast this with Finnish leadership who combined determination with real ability.

4.  It seems that, ill-equipped for fighting in the snowy forests and fields, the Soviets could not operate off the roads.   I am considering a special scenario rule that allows the Soviets to move (or attack) one grid area off the road, but once off, if they move (or attack)  at all, it has to be back onto the road.  It is very noticeable from the narrative that the Soviets were simply road-bound - quite incapable of manoeuvre.  That appears to be why Capt. Makinen's 2-company ridge-line road block near Haukila was so effective.  I've 'Google Mapped' the area, and that ridge doesn't even cover half the gap between Kalvasjarvi and Kuomasjarvi lakes.

However, once reduced to SP=0, Soviet troops may attempt to escape across country.

5.  In contrast, it is tempting to add to Finnish mobility by allowing the infantry to move TWO grid areas per turn, using skis.  I have been unable to discover what proportion of the Finnish troops in the area were so equipped.  Maybe they all were.  It would not surprise me.

6.  The lakes are pretty much frozen and permit movement at standard rates.  The road restriction still applies to the Soviets.

7.  Strength points.  At the moment I am looking at a standard SP-value for an infantry battalion to be 3 or 4, with the number of stands reflecting this (variations around 3 rifle and 1 support stand).  These values would be modified by quality (conscript/militia -1, veteran/crack +1), equipment (-1 poorly equipped, +1 extra well equipped), quality of leadership (in this scenario the Finns would get a +1 modifier and the Soviets, poor wights, a -1).  Robert Edwards allows that, considering the appalling disadvantages in all these regards, the individual Russian soldier acquitted himself well, and did not give up easily. Their defeat was due to an astonishing incapacity of the 9th Army high command, not helped by the stultifying 'political advisory' system.

At this point, I am in two minds about subtracting the poverty of equipment on the Finnish side, as the starting SP of 3 is intended to reflect that (more like the absence of equipment, actually!).  But omitting that deduction will make the Finnish infantry formidable indeed!  Mind you, they would have to be!

8.  General comment on SPs.  My current thinking is that the standard SP value for a battalion of about 50 tanks (40-60, say) is 3, with modifiers for training/doctrine, experience/crew quality, 'scariness of kit' (in 1940-1, the Soviet T34 and KV1 would get a + modifier), and leadership.  The artillery would be given 1 SP per 12 guns, with modifiers by weight, doctrine and possibly skill/effectiveness.

9.  Of 163rd Division, it would appear that two battalions of the 662nd Rifle Regiment were operating a considerable distance north of Suomussalmi - well off the map area (see previous posting).  So only two Regiments (81st from the north and 759th from the east) had captured and occupied the town - 6 battalions, with possibly a seventh - the remaining battalion of 662 that was held in reserve by the Division commander.

10.  Forty-fourth Rifle Division was called up from the Soviet side of the border near Raate, only after 163 Div had been under serious attack for two days (beginning December 11th), and the road east had been cut off.