My previous posting was intended as a one-off, but I could not resist adding just one more battle account.  Two reasons: the Borodino battle account had more to say about the set-up, the size of our battles (all 15mm scale, not one of them mine) bit also problems encountered during its course.  I do recall the unusually long time it took to play this particular game, for instance.
One of the drawbacks of our adaptation of the Paddy Griffith rules was, in my view, the size and power of the artillery, especially in this action.  As can be seen in the battle map, the Russians erected two enormous batteries - one on either flank.  They proved a barrier we 'French' barely even approached, and our attacks were no feeble pinpricks, neither. 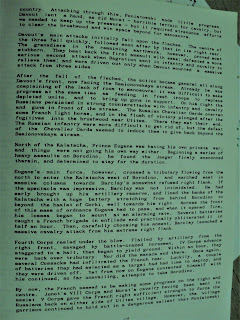 The Borodino battles was nearly the last of our refights, this article dating from the January 1993 edition of Southern Sortie.  I recall playing the part of Marshal Ney in the Lutzen battle, and I seem to recall there was a refight of Bautzen, but how far we got though the 1813 campaign I don't recall. 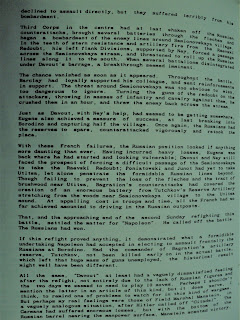 Speaking of Southern Sortie, this was the club magazine of the Christchurch Wargaming Society as it then was.  When it was first issued, I don't know, but I was, for a short time, one of its last editors - probably the last as a regular quarterly.  For most of its existence the mag was paid for out of club subscriptions and advertising revenue.  I do know that the editorial staff of the parvenu The New Zealand Wargamer tried during the 1980s  to persuade Southern Sortie to merge with it as a national magazine.  The Christchurch club members weren't having it, as I understand, and, on the whole, I think rightly (and thought so at the time, when I was living in Wellington, with no thought ever of moving to Christchurch!).

When the club ran into financial troubles (largely self-inflicted), its mag became an eventual casualty.  Its funding separated from the club subs, we discovered that what interest remained in its publication was not going to be enough to sustain it.  When the time came to determine the fate of Southern Sortie, as editor of the time, with much sorrow, I recommended it be discontinued.  I think one or two occasional issues were published subsequently, and then a more regular Southern Sitrep appeared for a while, with a certain John Moher as editor, but that ended about the time he moved to Auckland.
Posted by Archduke Piccolo at 4:42 PM