The lengthy correspondence between myself and Neil Patterson in the Comments Section following my previous posting reminded me and got me thinking about my battles long ago with the Command Decision rule set (Versions 1,  and 2 still my favourite).  The question came up concerning elements, units and command levels, a matter in which I suspect Neil and I were talking at somewhat at cross purposes.  Now, the peculiarity of the Russian formations was that, apart from 'self ordered' elements, such as recon, FOs, HQs and Staffs, the lowest command level was the battalion.

Just to make the point clear, here is the Command Decision Mech Bde OOB in brief: 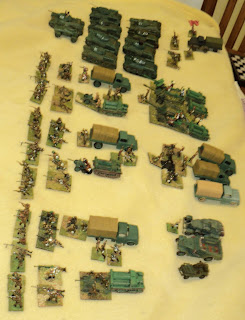 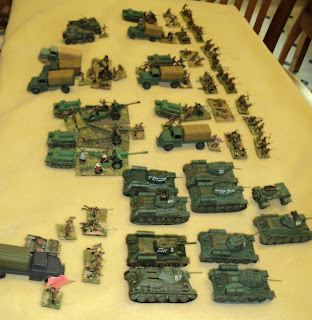 Now, any stand capable of giving orders, including to itself, could issue 1 order only.  Self ordered stands could simply move independently.  Command and staff stands could issue orders to all or part of their commands or units.  Note that no one required a command to shoot: that was automatic.

When in effect you could issue one command only to a regiment of 9 model tanks, or to 14 infantry and 'weapons' stands, you have a pretty inflexible bunch of units, especially with a whole variety of kit trailing along.  The battalion commanders would fetch up issuing orders to part of the unit - the rifles, SMG and possibly ATR companies, 8 stands, say, moving up, whilst the rest,  staying put, offered supporting fire.

Having no integral command stand, the Brigade troops came under Brigade or Staff command, but they could be ordered over to a battalion, say, where the local commander could attach them to his own command with a 'take command' order. This could help beef up the rather puny assault capability of a battalion by adding extra SMG and AT Rifle stands.  If they were close enough to hand, a single order from Brigade was enough send the whole SMG and ATR companies together to their destination - provided it was the same destination.  Commands went to 'groups' rather than 'units', though more often than not a unit was the group.


That these formations were barely playable translated into: 'but they are playable' - quite a challenge, and surprisingly perhaps, interesting.  And one did treat these units as units.  A little added flexibility, if you needed it, might have been obtained by the intervention of the Brigade staff.

In one memorable action, I had my tank regiment advancing up the left flank to seize a ridge where they were to take up hull down positions.  Beyond the ridge, my recon units had espied a body of Panther tanks heading for the same objective.

I used the regimental command to order two companies (20 tanks = 4 models) up onto the ridge (cautious advance) to take up hull-down positions and engage the enemy.  At the same time I used the Brigade 'staff order' to send the Regimental Commander and the rest of the unit off to the right flank: 'full advance'.

Now the orders are issued with chits, a full advance being a solid arrow, a 'cautious' being a hollow one.  The facing of the unit at the start of the ordered move is immaterial, but upon its completion, the unit and its elements must be facing the direction of the move, that is to say, the arrow.

So my tank HQ and 2 coys fetched up sitting close to the right hand edge of the table, apparently aiming their guns at whatever was on the next table over (this action was played at the Club).

Come the next turn, the tanks needed no staff intervention.  The hull-down companies on the ridge having engaged the enemy's attention could without orders happily carry on  their duel with the enemy panzers to their front, honours so far roughly even.  Meanwhile the colonel issued a 'cautious advance' to the tanks under immediate command, with the movement arrow almost, but not quite, in the reverse direction of the previous order. Call this direction '7 o'clock'.

Down came the 25 tanks (5 models), booming onto the flank of the Panthers.  Caught in a crossfire as they were, flank armour vulnerable, the Panthers were left, in a trice, smoking and disabled in front of the ridge.  Thrown onto the defensive, the Germans fell back.  The rest of the action was something of a pursuit, though chasing after a still fairly agile enemy (whose lowest command level was company), with 14-stand battalions was never going to be rapid.  In fact, most of the support stuff got left behind, as the rifle and ATR armed guys chivvied the enemy infantry into retreat.

This was probably my only real 'formation in a box', and 20-30 years ago, it got a fair amount of action.  Only the troops and their weapons were 'in the box', the transport and the tanks being housed elsewhere.  But it made retrieval for pick-up games very easy. 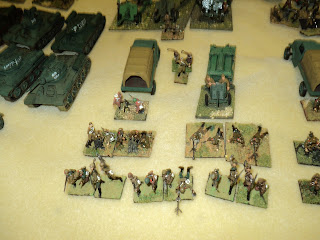 I mentioned to Neil a Club Tournament played in the early '90s.  A club member had put together a points system (much flawed in my view, but such things aren't easy to develop), and we chose our forces according.  Of course, I simply had to field 488th Mechanised Brigade, but points limit forced me to pare away two of my T34s, and even than they had to be the 76mm gun version.  I think I dropped a rifle battalion as well.

The tournament featured I think 7 or maybe 9 players.  There were four rounds, using the Swiss System of pairing.  So who got the bye in the first round?  Yep: you guessed it.  That I probably knew more about the Swiss System than anyone else at the club was not sufficient to persuade the organiser that who got the bye in such events got the full point.  I didn't even get half a point.  Word, if ever you are organising a tournament on a Swiss System basis, as after the first round, the bye goes to whoever has the fewest points.  Not that I was all that fussed - I wanted to see how my guys would go.

The other point of interest going into this was that I must have had by far and away the weakest force of them all.  All my tanks were T34/76s - seven of them.  The only other force with as few as 7 AFVs included 3 King Tigers to go with his 4 PzIVHs.  Of my other two opponents, one fielded a couple of Jagdpanthers along with his other kit, the other, presumably part of the Allied effort post May 1945 to show Stalin what was what, fielded 8 or more Comets and Challengers - along with an elite battalion of paras - among his forces.

Mind you, the Brit paras were the only 'elite' troops my guys had to face.  All the rest - all of them in the whole comp - were veterans.  I didn't have a single veteran in my lot: 'experienced', they were classed as.  That placed them inferior in fire power, and at that time inferior in sticking power as well.

Well, I didn't win a game.  But I didn't lose any, either.  My guys stood up well against superior opposition, and might have won any of them.  The Brits, on 3 out of 3 going into the last round, my chappies fought to a standstill.  No picket fence for him! (Chess followers will know what I mean). Two companies of T34s caused mayhem with a surprise flank attack onto the flank of a line of Comets and Challengers occupying hull down positions along a ridge.  Unfortunately the enemy got in a few licks of his own, with his elite paras knocking out the lone tank company I had left (mistakenly) to guard the right flank, and his attack on a defended town was slowly gaining ground.  All in all, though, I was satisfied with my 3 draws from 3.

Four-eighty-eighth Mechanised Brigade lost but one battle in its entire career - as it transpired, it was to be its last.  I was showing a beginner a game and its mechanics.  He had Germans with, among other stuff, a company of Tiger I tanks. Things were going OK when his Tiger company happened by a village I was in the process of occupying (and setting up a 45mm AT popgun in the street aiming at the flank of the none-too-distant enemy).  Between my tank regiment and the tigers was a low ridge.

Now, in a close quarter fight, I rather fancied the chances of my 9 T34/76s against 4 Tigers.  Here was the plan: 'a cautious advance' to take me to hull down positions on the ridge line, followed by another to take me right in amongst the whole streak where I'd be getting shots in against side and rear armour.   Lay orders laid down with 'Command Order' placed over the top to conceal them... And then the reveal.

Horror.  I had inadvertently placed a 'full advance' arrow.  You could still shoot with that order, but only in the close fire phase.  Now, what I ought to have done was to accept the situation and used it to go hooning over the ridge and have it out, even though the enemy would have got in the first shots.  Had I paused for reflection I might have nutted that out, but I generally play my war games fast, and make quick decisions.  Usually they are the right ones - or at least, they work out.  Not this time.

In my attempt to make the best of it, I decided to do as I had planned, just accepting that any action (even twitching) still counted as a 'full advance', drove up to the ridge line.  There I lost a tank or two to incoming.  Then the next turn got stuck in up close.  Well, he got opportunity fire, this time din' 'e?
Carnage ensued, and although I still had some tanks in action come the close fire phase, I think I knocked out one Tiger and scratched the paintwork on another.  More than half my regiment was wreckage.

Then (this is going to be the Bad Part, eh?) came the Morale Check.  You could hear Fate, coming down the corridor in hob-nailed boots and dragging her swagger stick along the wall.  Roll the D10 die: '10'.  It could not have been worse - several elements destroyed this turn, enemy armour close enough you could smell the bratwurst, and I can no longer count -1 for 'large group'.  The crews baled out of the few remaining runners, and did a runner themselves.

I'd lost my entire tank regiment.


I probably could have carried on the action, and maybe yet have fought the enemy to a standstill.  One weakened company of Tigers couldn't be everywhere (although he might have had some other armour somewhere; I don't recall, now).  But I called the game pretty much right there, a German victory.  After that, I never got to play CD very often.  Pity: it is a fine rule set.  And I still fondly remember 488th Mechanised Brigade.  You know, I never did assemble an equivalent formation from my German and Commonwealth armies...


Posted by Archduke Piccolo at 1:07 AM