At last, pretty much finished the naval forces for the First Blacklands War.  A couple of vessels I had to modify as I found better pics of their architecture.
TNS Hamidieh received some secondary armament, 8 x 5.9-inch (150mm) guns.  I made the shapes of the turrets more rectangular than triangular or trapezoidal as more robust.  I am quite consciously taking some liberties with the original design, but the whole 'cartooning' concept permits such deviations.  I think.
I closer examination of very good plan and elevation coloured pictures of  the Original Greek ironclad battleship Hydra, showed its forward main guns were barbette mounted, rather than behind casemates.  So I replaced the casemate guns, and mounted the 10.8-inch chaps either side of the bridge.  They are rather higher than they ought to be I think, and the vessel looks even odder than before, but I'll have to be satisfied with this result.
I'm thinking of a single ship encounter by way of a prologue of the naval aspects of the War.  This is projected to be a single ship action between respective coastal battleships, Messudieh and Hydra.
We'll close with a couple of plan views of the respective fleets. 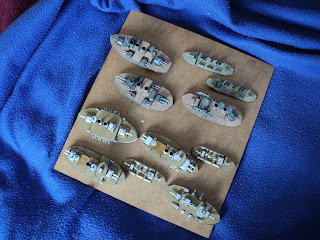 Posted by Archduke Piccolo at 4:02 PM