The action opened with the Hellenic Army advancing all along the front, with the flanks pushing forward to clear the rather exiguous Turcowaz defenders on both wings, whilst, once cleared, the  plan was to mount a determined effort against the town.  For their part, the Turcowaz had formed behind Khalkidona town itself, pressing into the place half their infantry only after the Hellenic Army advanced over their start line.

As usual, this solo game featured both sides dicing for 'first go' each turn, and then dicing for activation.  In the event both sides did fairly well in their activations, the Turcowaz general, being the best the Supreme Door (you've heard of the 'Sublime Porte', I dare say?) could put in the field, having the advantage of an extra activation point from the standard.
The very first attacks developed against the Platy railway station, a point that, to defend, Halepi Zeki Pasha had to throw forward his left flank, namely the 22nd Infantry Regiment. In it isolation, the only support could come from 12th Mountain Artillery, a good distance to the rear, beyond the Vardar River.(the counters, by the way, identified quality: blue for veteran, green for ... erm ... green). The first attacks the garrison held comfortably enough, although without inflicting serious hurt upon the attackers.

On the northern flank, the powerful medium Artillery the Hellenians possessed went to support a single (green) infantry regiment (22nd) and the cavalry to clear away the enemy sipahis and the mountain gun regiment behind the railway. As the field artillery, machine guns and the supporting infantry (11th) mounted the ridge west of Khalkidona, 20th and 21st Turowaz infantry occupied respectively the west end of the town, and the rising ground on its east flank. In its exposed position, the latter was to come in for the attention of the machine guns and rifles from across the valley.

Coming up beside the road marched a column comprising 12th and 13th Hellenic Infantry, their aim, once coming up level with the town, to  storm the north face (12th), and the woods beside it (13th). But the place was very strongly held. The success of the Hellenic plan very much depended upon successfully clearing the flanks.
The fact is, the Hellenic army being very marginally the stronger, I had to devise a plan that had some prospect of success.  They had 3SP extra, the better trained cavalry and the longer ranged artillery; but the Turcowaz foot were the better quality overall - no green infantry with Fourth Army! And Halepi Zeki Pasha was Turcowaz's best general.

Hellenic early prospects at the outset looked unpromising. The attack upon the railway station were held up for a time, even once the 1st Hellenic infantry joined in. In the exchange of fire across the vale between the town and the ridge to the west, neither side seemed able to do any damage, except for 1SP from 21st Infantry flanking the village. The first actual assaults came in on the north face, whereat the 12th Hellenic Infantry were at once attacked in flank from the marsh to their left flank. On the north flank, the Hellenic cavalry scored an early success, inflicting losses upon their mounted opponents, but failing to drive them from the field.  .
Then the machineguns scored a major success against the enemy infantry (21st) manning the hill flanking the village. Already reduced by 25%, a further reduction induced the Turcowaz to abandon the eminence, fleeing as far as the road behind them. The three 'hits' translated as one 'kill' and two 'retreats'. Unfortunately for the Hellenic army, they failed (or were unable) immediately to follow up.
The attacks upon the railway station were also eventually successful. Attacked in front and flank, the garrison fled with 25% casualties through the marsh and also to the south road. Hellenic losses were minimal (no SPs lost).
On the north flank, not only had the Turcowaz horse given best to the Hellenic, part of the mountain artillery had also been silenced by the heavier enemy ordnance at extreme range. This seemed just the opportunity to knock out the remainder of the artillery regiment for good; the Hellenic cavalry charged. To protect their left flank, 23rd Infantry sidled across to their own left to face the Sipahis.
Hellenic assaults continued against the town, but, having taken 50% losses, 12th Infantry were making no headway. The 13th joined the attack to their right through the woodland reserve, but the town garrison had all the advantages of cover and numbers. The artillery support had so far been ineffectual, though the nearby hilltop, reoccupied by its former defenders, was about to be abandoned for the second, and last, time.
Having driven two Turcowaz infantry regiments back to the road, 1st and 21st Hellenic Infantry drew the attention of the Turcowaz artillery across the river. The former, being nearer to the artillery's front, and closer as well, at once began taking significant losses. Though driven back with loss, the 21st and 22nd Turcowaz infantry were still very much in the fight. The odds, hitherto in Hellenic favour in this part of the field, had suddenly shifted against them. 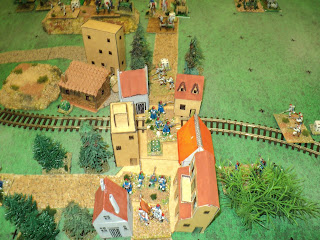 Nor could the Hellenes achieve anything against the town - 12th Infantry definitively repulsed with 50% losses, though 13th continued to press. By this time there was plenty of support incoming from gun and MG fire, but as yet enjoying no success.
Things had also suddenly gone awry on the north flank as well. Held up on the gun line, the Hellenic cavalry suddenly found itself assailed in flank by Sipahis. Taking the bold course, the green light cavalry flung themselves into the enemy horse before the infantry in front could react.   It was a depleted Hellenic cavalry regiment that fell back, the remaining enemy guns still unsilenced. In this part of the field, Hellenic losses had reached 5SP against just 2SP Turcowaz. But over the whole battle the 'score' was, respectively, 6SP to 5SP lost. The Hellenic army still had a shot at victory.
To the south once more, and the full Hellenic tide was now as rapidly on the ebb. Gun and rifle fire drove back the veterans of 1st Infantry, and 21st Hellenic found itself under attack by the weakened 22nd Turcowaz. Taking advantage of a gap in the enemy line, 21st Turcowaz stormed into Platy Railway Station, whence they opened up a flank attack upon the enemy 21st Regiment.
Embolded by their success, the Turcowaz cavalry carried on their attack to strike the depleted 12th Hellenic Infantry.

For their part, the equally battered Hellenic horse attempted to serve out the Sipahis in the same manner as they had been shortly before.  True, the Sipahis gave back, but that was the end of the Hellenic cavalry as a fighting force.  It also spelt almost the end of close assaults on this flank, so heavy had Hellenic losses been.

In the centre, though the fighting had led to the 13th infantry being flung out of the wooded park, part of the garrison - 19th Infantry - had been forced to abandon the centre of the town. It was bad luck that the Hellenic army were not well placed to exploit the success. 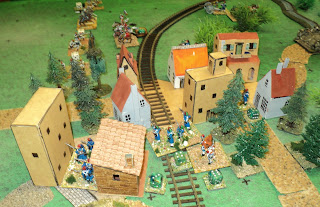 So matters stood well into the battle. On the south flank, the Turcowaz had lost and recovered Platy Station. On the north, the Hellenes had been fought to a standstill.  But the action was not yet over. Victory was still possible. With the loss rate by now a 7 Turcowaz and 8 Hellenic, victory for the latter was not especially unlikely, at that. 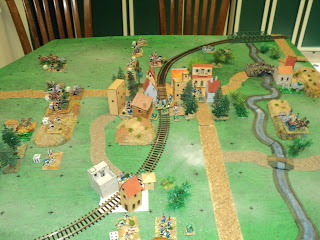 That promise seemed to be fulfilled, for at last the Hellenic fire against the 20th Infantry in the town began to take effect - (3 'hits' from 3 'shots' - the second time this day). 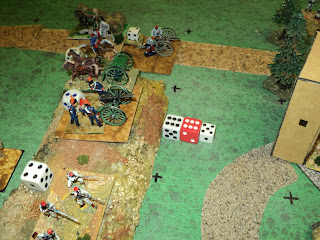 The MGs: 3 'hits'...
But all three 3SP 'hits' from the machine gun unit counted as 'retreats'.  Back went 20th Infantry, back as far as the woods lining the riverbank.  Had all three, or even just two had been 'kills', the Hellenic Army would have had good reason to hope that an all-out attack across the whole front might yet conjure forth the victory.
Such was not to be. Although the western end of the town was lost, the Turkowaz reoccupied the town centre, and there, safe from enemy gunfire, awaited whatever the Hellenes might throw at them. There was little left of weight in that army now. The Turcowaz sealed the victory on the southern wing with concentric close assaults reducing the green 21st Hellenic Infantry to 50%.
Although rifle fire persuaded the Turcowaz cavalry to retreat to the riverbank, the mountain guns remained, though under rifle fire. But it was the loss on the other flank that persuaded Crown Prince Constantine to call off the battle. He was not at all prepared to give up the field, but neither was Halepi Zeki Pasha ready to try for outright success himself.  The ongoing rifle fire petered out as the Crown prince pulled his line out of range. 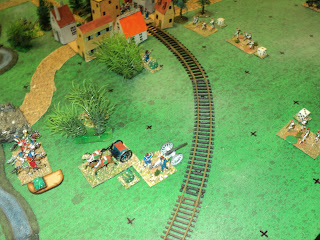 Neither army was yet especially close to their exhaustion points. Having lost 7SP, the Turcowaz army was still well short of that point. The two SPs recently lost to 21st Infantry brought the Hellenic Army to 10SPs lost, still some distance from the exhaustion point of 14SP, but a deal closer than the enemy was. To carry on now would be to over-press with slender prospects of success.   In terms of numbers, the 41,000 strong Hellenic Army lost 5000 men; the 38,000 Turcowaz were now 3,500 the fewer. 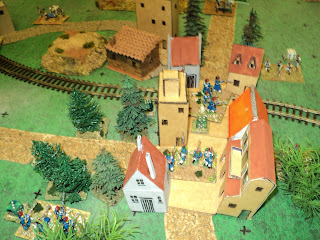 Though historians are inclined to award the palm to the Turcowaz Fourth Army, and it is true they had the better of the fighting, in reality it was something of a tactical draw. Neither were in a position now to drive back the other. Here lay a conundrum for the Turcowaz: an undefeated army in front of them, and probably another strong army, distant yet, but astride the line of communication with Constantinople, and approaching from the east. How was the strategic position to be determined? Could something be expected from Second Army, in North Macedonia?  Only the unfolding of events elsewhere would decide History's assessment of the action at Khalkidona. 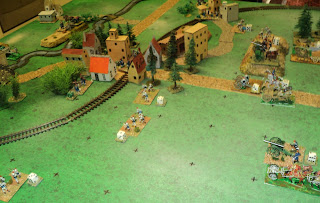 In the days that followed, rumours began to circulate of a great battle fought in Chervenia. Carrying the fight to the enemy, First Army had invaded one of the Allies in pursuit of a defeated army. Whispers also sighed through the camps - the Turcowaz Navy might test the Hellenic blockade of the Dardanelles. Could such a thing be possible?

To be continued: The Turcowaz invasion of Chervenia.
Posted by Archduke Piccolo at 6:31 PM