This will be a brief posting, just a reminder that, for the last week of October, the Black Mountains Army has been besieging the city of Scutari, in Northern Abiloni, near the Adriatic Sea coast. I needed some very simple rules for the siege, which had to include the possibility of surrender, but also the chance of the garrison attempting a sortie, or the besiegers attempting a storm.

The besiegers do not greatly outnumber the garrison; so a coup de main seems unlikely. What I have decided is that, failing a relief - unlikely for quite a while - each week I would roll a D6 die. On a '6', something will happen.  A second roll goes something like this:
If anything happens that leads to a fight, the table will look like this... 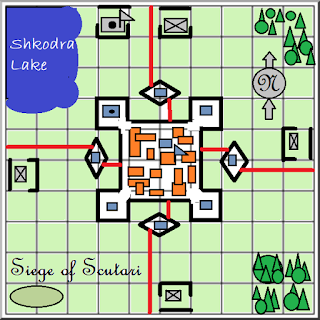 Now, the forces involved in this siege comprise:

Black Mountains Army:
Turcowaz Garrison
* Note: The numbers of units being so small, each may be split up into stands of 1 or 2 SPs, as hinted by the diagram map.  This will alter the unit and activation counts, with no adjustment to SP or exhaustion point. So, if, apart from the command element, all units are split up into 1SP stands, then:
Turcowaz have 1 command, 8 infantry, 2 artillery - 11 units, median 6.

However, one or either army might choose to retain some units with 2SP.
I have to admit, that apart from dicing for events in the first week - a '2', so nothing happened - I haven't play tested any assaults. I'll leave the excitement for when it turns up!
To be continued:  Week 5 - the beginning of November.
Posted by Archduke Piccolo at 2:51 PM