By the beginning of the fifth week of the war, the four Allies, The Black Mountains, Bejela, Chervenia and Hellenica, were beginning to perceive they had caught a Tartar - very nearly literally. Several defeats, relieved only by the rare victory, had left two of the Allies with nary a foothold in Settee lands, one (Bejela) whose presence was permitted solely by the lack of a Turcowaz army near enough to hand to evict them, and the fourth barely maintaining a siege of a far-flung Imperial provincial capital.
How might the Allies back gracefully out of the conflict with their honour intact and perhaps some territorial acquisition at least to offer a semblance of success? The more farsighted statesmen of all the belligerents had agreed that talks might lead to some sort of agreement. The Allied plenipotentiaries hoped that verbal shots might supply the deficiencies of artillery and rifles; the Turcowaz, of course, stood upon the integrity of Empire, arguing that the Allies ought to have been satisfied with what they had already won for themselves decades ago.
So the representatives of the warring states forgathered in Genevra, the capital city of neutral Helvetica. For a while it was thought that Lutetia in Azuria would be the venue, but already war clouds were gathering over that city, massing from the direction of Ruberia. For a couple of weeks the talks seemed to be leading to nothing, as the Allied officials saw their position weakening day by day; and the Turcowaz grew more assured of the strength of theirs. Finally, as November entered its second week, the Allies, disappointed at the indecisive outcome of the latest action in North Macedonia, could hope only for the outcome of the unlikely siege of Scutari, near the Illyrian coast.
Now, before resuming the narrative, permit me to apologize for the poor quality of the set-up. I had to extemporise, the materials I thought I had having been thrown out years ago. The only virtue is that at least the fortification are easy to trace. Least said the better.
Now, the forces involved were very small. I had earlier decided that the garrison of a provincial capital should comprise 16SP, made up of commander, 2 infantry stands and an artillery stand. It so happened that the Black Mountains army besieging the place was little stronger. Given the small numbers, I decided to expand things a little, splitting the stands whilst keeping to the given strength points. So the opposing forces comprised:
Turcowaz Garrison of Scutari:
Totals:
10 Units - Median activation 5-1 (Poor Command) = 4
16 SP - Exhaustion Point = 6 SP

Army of the Black Mountains Principality:
Totals:
9 Units - Median activation 5+1 (Good Command) = 6
19 SP - Exhaustion point = 7 SP
* This unit might have had 2 or 3 SP instead.  See later for explanation
** The pictures will show 2SP, but as the Black Mountains artillery never came under fire, it didn't make any difference.


The siege having made no progress over two weeks a number of the townspeople, longing for the end of Turcowaz rule, contacted the besiegers and agreed to open the gates to the Black Mountains Army. Having entered the town, this desperate band was to attack the garrison from within whilst the main body stormed the walls from without.

This circumstance was generated by a die roll that determined there would be an 'event', and that the event would, from a range of possibilities (e.g. an attempted sortie, or the garrison seeking terms), be the attempted coup-de-main as so far related. It appears that pressure was placed upon the Prince, who in turn issued a peremptory order to his general to take, carry or storm the town by the middle of November.

How much of General Bogotan's army might be infiltrated into the town. I allowed as many as 3SP, based in a die roll. The roll was a '2', so just 1SP was inserted into the town, ready at once to attack in flank a defending unit.

Some further points need to be made.
1.  I made one change to the rules concerning communication between squares being solely along the sides, NOT the corners. This concerns the bastions at each corner of the town. The corner at which the bastion adjoined the town (the 'gorge') was treated as if it were a side, not a corner, for movement, and for close assaults. 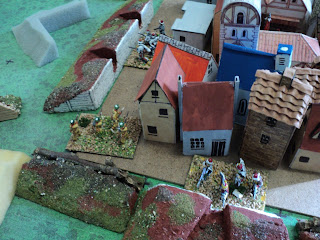 2.  Only the town, bastion and demi-lune (ravelin) walls offered cover or protection to the people behind it. When defending the gorge of a bastion, or within the town, there was no cover for either side. The unit within the town begins by attacking a unit in flank, and therefore requiring a 4 to hit.
3.  I had earlier planned on the town itself occupying 4 squares only. I found this altogether impractical, and decided instead upon a nine-square 'footprint'. That permits the addition of demilunes or ravelins in a realistic manner.
The narrative, and the outcome of the Genevra talks will be related next time.
Posted by Archduke Piccolo at 5:11 PM