'The Almighty blessed our arms with victory to-day.' So began the report of Major-General Thos. J. Jackson to the Secretary of the Army in the Union capital city. For all his praises to the skill, stamina and success of his Tenth Army - and there was no doubt the general took great pride (on the whole) in his officers and men - he was beginning to sense that, in the Chinese Army, they were taking on a veritable Hydra.

Three separate columns had his army defeated, yet all remained in being and at large - and the reports he received two days after the battle at Liaoyang did nothing to set his mind at ease. His cavalry, having followed up - at a discreet distance - the defeated enemy, set about observing from south of Yangzigu village, where the enemy had halted. There they reported a considerable concentration of Chinese forces. A large column, descending from the north, had joined the two the Tenth Army had already faced. The three combined presented a formidable force, a good 40,000-50,000, the usually reliable Brigadier General 'Reb' Klamath reported. A lot for fewer than 20,000 to take on. Thank the Heavens for the 5th Army reinforcements coming up from the south.

Not to be forgotten was the enemy column somewhere west of the turnoff just half a day's march to the south. His scouts there had reported, before being chased off by enemy cavalry, that this southern corps was holed up a day's march west of the Weshall Pass battlefield and fortifying. For the moment there seemed to be no indication of their moving, but he left the scout picket at Weshall Pass to keep watch along that road.

Meanwhile, the reinforcing brigades would be arriving at Camp Supply, Jackson's centre of operations a day's march south east along the 'main' road to the south east - Jube Early's 17th Brigade by late July 26th; Joshua Chamberlain's two days later. It would take a further day and a half from there to reach him at Liaoyang.

The Other Side of the Hill...

T'ai Kun Wu, commander of the Chinese Army of the East - the Army to Recover the Lost Lands - sat musing in his pavilion just outside the ramshackle, semi-deserted town of Yangzigu. The East column conscripts had done much to place the town and nearby features in a state of defence should the Barbarians come, and the North Column arrived there shortly after his own defeated West Corps. The late defeat was unfortunate - he had thrown everything into that assault, and victory had seemed so within his grasp. How he wished for some of the devil's rifles the barbarians possessed!

But the combined columns now gave him a force of something over 40,000 troops. So far his information indicated that the enemy had less than half that number - surely even his superior equipment couldn't redress the difference? And what of the South Column? T'ai Kun Wu dictated his orders to two messengers to be sent by different routes to find South Column, to order them forward and take, if possible, the road junction to the east of them.

Once he had reorganised the troops about Yangzigu - some badly depleted formations had to be disbanded and/or merged - he would begin his own push southwards. Something had to be done, and that right soon. In this depopulated wilderness, provender for his troops was hard to come by, but his ammunition position was the really problematic consideration. If ever the barbarians discovered his trains - it scarcely bore thinking of.

The manner of conducting this phase of the campaign was to program the Chinese actions, and ask Tony Adams to indicate Jackson's orders. After the battle of July 22nd, West Column retreated through the next two days to Yangzigu. There, T'ai Kun Wu spent the next two days reorganising and preparing his army once more to advance southward - all three columns combined. Meanwhile, the South column, hovering a couple a days' march west of the Union line of communication, was fortifying in place.

The duplicate messages were to direct the South Column to move against the Union LOC, sent by different routes. Both were diced for: a '1' meant the messages failed to arrive (the messengers got lost, were waylaid, or simply deserted); a '6' meant the messenger was captured and message deciphered. Both rolled a '1'! However, there was always a chance that the commander of South Column would take the initiative without orders. From July 24th I diced for their moving east, a '6' being required. Sure enough, on the morning of July 27 that corps emerged from its fortified position and pushed eastwards, reaching the Weshall Pass battlefield late the same day. They would reach the turnoff by evening of the 28th.

It was on this very day, the 28th, that the main Chinese Army launched its offensive from Yangzigu.

General Jackson had decided to wait at Liaoyang for the arrival of his reinforcements. At midday of the 28th, Brigadier-General Jubal A. Early arrived with 17th Brigade - somewhat understrength, but a welcome addition to Tenth Army all the same. But it was during the same forenoon that unwelcome news of greater import also arrived. The scouts at Weshall Pass, chased out of the place by hordes of advancing Chinese, reported that the latter would be up to the turnoff by evening. From his cavalry, a dusty messenger arrived. The main Chinese Army was on the move.

At once, Jackson issued his orders. His army would march south. There was no question but that the road south had to be cleared. Sure enough, upon arrival at the turnoff shortly before sunset on July 28, Tenth Army found a Chinese force in place, astride the road. Clearly they hadn't been there long - and in fact had won the race by a bare hour. They had had no time to prepare field fortifications. With a large Chinese force close - maybe a day's march - behind, Jackson had less than a day to clear the road... 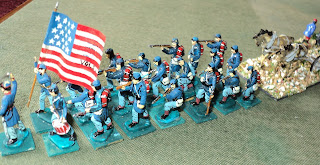 Both sides have had to reorganise their armies, the Chinese rather more than the Union.

Chinese Army of the East:

Great Battle in the West

This newssheet is pleased and honoured to report yet another victory to the credit of ours arms in the last week. The Chinese Emperor's attempt to recover the lands forfeited in the course of aggressive war twenty years ago, is being met stoutly by the sturdy hearts and polished weapons of our Tenth Army, led by the redoubtable Major-General Thomas J. Jackson. His command is being ably seconded by his Brigadier-Generals and a well-trained staff.

In certain quarters we are being regaled to the carping criticism of our gallant army, most of it directed at their commander. Perhaps were are bearing witness to the senescence and debility of advancing age - the source of opprobrium claiming eighty years of establishment. But feasibly, and more charitably, we might attribute the intemperate language being used to the quite justifiable fears for the fate of our 'Guardians of the West'. No unpopular commander would wear the affectionate sobriquet 'Old Blue Light', bestowed by his loyal troops. We leave the reader to surmise the identity of those 'certain quarters'.

It is true that Tenth Army faces a formidable foe - and, by all accounts, a wily one: determined, ruthless, resilient. It is true that the so-called Army of the East has taken some very hard knocks, none harder than the rout at Liaoyang, where the enemy lost more than a third of his force. But instead of skedaddling west right out of the disputed country, back he comes, within a day or so, with an even larger force. In the face of this, and to the threat to the Tenth Army's line of communication back to his Centre of Operations, Jackson has had perforce to order a retrograde movement, and to brush aside as quickly as may be the enemy who has essayed to interfere.

This is a veritable David versus Goliath battle, and our heartfelt wishes lie with our Shepherd, that he drives the Philistine far from our frontiers.

Great Battle in the West

It seems our General, 'Fool Tom' Jackson, has once again put his foot in it. Having left one of his Brigades to sustain the fight against the enemy's main Army, the General reaps some minor accolades by defeating and driving off an isolated enemy detachment. This subsidiary engagement this General elevates to the dignity of a battle - no modest hero, he - whilst for a second time, at Liaoyang, Brigadier Bidwell has had perforce to face off against a much more numerous foe.

So great the numbers - so furious the onset, withal - that Bidwell's isolated Brigade was fairly driven from the field, his guns overrun, whilst Jackson was still on the road. That the action turned into something resembling a Union victory must redound entirely to the credit of Bidwell's gallant command in standing off for so long and exacting such a fearsome toll before admitting, under duress, passage to the Chinese Army. The main body of Tenth Army, arriving not a moment too soon (indeed, we might say several moments too late), was able to reverse Bidwell's ill fortune and set the enemy to the rightabout. Not, however, without further cost to men and materiel. The General's claim setting the enemy's loss at three times his own we might justly take cum grano salis.

The tale endeth not there. All Jackson's Great Victory at Liaoyang achieved was to drive the Chinese main column onto his supports. And such supports! Reports tell of Jackson now directly facing double the numbers he recently defeated. Whilst he sits idle upon the late field of battle, his seemingly redoubtable adversary once more gathers his strength for an even more powerful blow. Catatonic as the hare transfixed in the glare of a torch, he then permits an enemy force to insinuate itself betwixt his army and his base!

He has in the meantime been joined by 17th Brigade. It would appear that that formation must on the march have passed across the front of the insinuating column by not more than a day's distance. If by some miracle Jackson escapes the toils within which he finds himself inveigled, it will be to have fallen back to his 'Camp Supply' - a good 40 or so miles back from where he reached just over a week ago.

We think perhaps to say General Jackson has 'put his foot in it' is to select the wrong end of his anatomy; hence the wrong metaphor.  Perhaps the part so encumbered is that more usually associated with the noose.  The pity of it is that so many good men must share that fate.

Posted by Archduke Piccolo at 1:58 PM