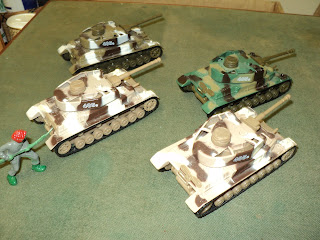 At the recent Club bring-and-buy, I snapped up five interesting items, 3D model prints of military hardware that seemed just the right scale for my Army Men (a.k.a 'Jono's World') project. At five bucks the lot, how could one miss? It's one of those 'on again off again' projects that isn't seeing much action but which is gradually accumulating a fairish amount of kit.  So I thought I'd take a little bit of an inventory. 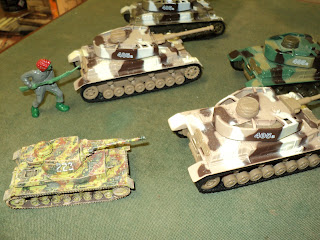 We start with these toys out of China. Toys they are, with those friction-motor thingies that allow you, after dragging the vehicle back along a surface, to let it travel along at a considerable distance. It waggles its turret about a wee bit as it goes.  I like these things - pretty reasonable models of PzIVG, slightly underscale compared with the largest of my army men figures, but, as the picture shows, quite a bit bigger than 1:76 scale.   They're pretty chunky and heavy - probably too heavy for their friction motors, but that motive power is not what I got them for. These tanks form a company, or maybe a small battalion, in the service of that aggressive island Empire, Ra'esharn. 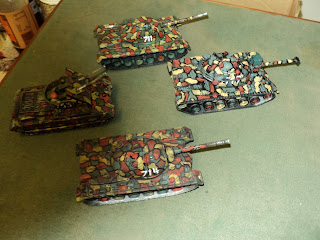 This harlequin group of four make up another unit. The two flanking AFVs, 711 and 714, are Army Men Pattons - which, considering they are cheap toys - not a patch qualitatively on those PzIV toys - are actually quite good. The armoured AA vehicle is an even cheaper toy, and pretty battered into the bargain, but now reinforced and modified, with a crew man added. I want a second crew man, but do you think I can find among all my Army Men (I must have two or three hundred at least by now) a second dude wearing a beret? Now, the lead tank, 717, is one of those 3D prints I bought. Actually a little bit of assembly work is required, but nothing onerous. It is almost exactly the same size as the other two - quite a nice little armoured force.

The PzIVs I treat as my 'standard type' for determining weight of armour and anti-tank: medium armour; medium anti-tank. The Pattons I treat as heavies, with a heavy AT gun. 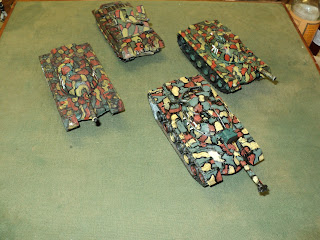 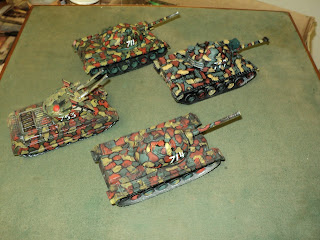 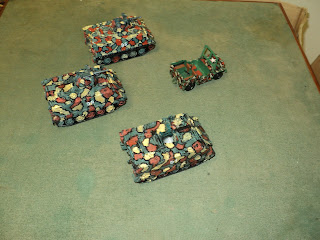 Three of the other 3D items were these APCs - presumably M113 in our world, but simply armoured personnel carriers (APCs) on Sideon IV - Jono's World. At last I can mount my alleged 'Armoured Infantry' in something that actually has armour. In the picture below, is a prototype armoured infantry battalion with their APCs... 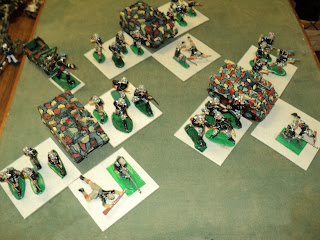 ... and that brings me to a recent change in how my armies will be organised. Having bought a copy of Tim Gow's Little Cold Wars, I rather liked the way his set-up looks. Instead of mounting figures as individuals, with a numerical scaling down of units and formations, I've gone for mounting them on bases, comme ça  Little Cold Wars, but on 75mm square, rather than 4-inch. This will mean my having to modify my rule set for this project, giving it an extra braincell or two. 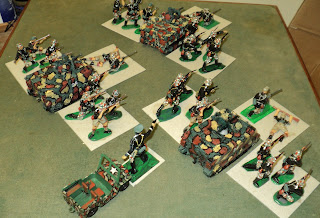 Now, although a good deal of the kit looks 1950s-ish, in fact they purport to be roughly 1943 tech. Which will probably be a 'Strange Little War' for some. The Patton and one of the Kiivar tanks will be the rough equivalent of a German Panther or Tiger. Because I have so many of them, I had to include bazookas. Originally the tech was supposed to be c.1940,  but the available kit tended to no earlier than mid 1943, so there it stands - no ATGW, no jet-powered aircraft, no helicopters. Whilst I was taking pictures, I thought I would picture what a Kiivar medium artillery battery or regiment would look like. I thought 3 of a crew for each of 3 howitzers, unit commander, and a forward observer group. Those large jeep-type vehicles become artillery tractors and ammo carriers, and the little jeeps the command and FOO vehicles. Perhaps I should add some extra jeeps to transport the gun crews! This unit is of course under naval operation though under army command. The loss of so many ships has left many Kiivar mariners stranded on the beach, whereat they were offered employment among the land forces. That's the 'backstory' I'm running with anyhow. Very well, among a whole bunch of Army Men figures that fell into my possession, were a bunch of these sailorman figures. Four of them were carrying artillery shells under-arm, to the whole lot became artillerists. I rather liked the look of these fellows painted up...  The blue of the jackets were left unpainted, as I liked that sort of blue. Finally, the last of the 3D buys; this fine Centurion. Bigger than the other four I have, this one is of a size with the Pattons, so it will count as a heavy tank as well - a Cougar Mk IV. The two smallest Centurions in the bunch are so close to 1:72 scale, I'm tempted to shave back the exaggerated front mudguard overhang, and enter them into the service of the Nawab of Tchagai... 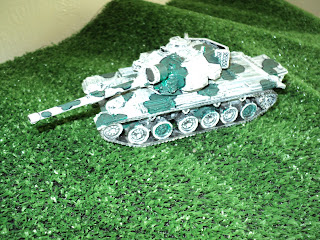 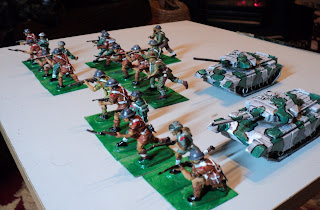 These chappies were going to be 'Cougar Mk I' light tanks with a light-medium anti-tank gun. But the scale is small enough that it won't look out of place with 1:76 scale figures in my Harad project. They'll probably be retained as the Mark with a 20pr main gun.

All this stuff is of course not my total inventory - just what I've been working on lately.
Posted by Archduke Piccolo at 5:51 PM