Lacking much in the way of motivation, lately, I thought I'd try something fairly easy to set up - another Sengoku action.  The previous one was related here:

This action was based upon the 1572 battle of Mikatagahara, between the two redoubtable foes Takeda Shingen and Tokugawa Ieyasu.

After having neutralized, by securing alliances with, his rivals to the east, and awaiting the snows to close off the mountain passes to his great northern enemy, Uesugi Kenshin, the formidable Takeda Shingen led a 30,000-strong army south from his own capital, Kofu, into Totomi province from whence he aimed to march on Kyoto. His advance was to be opposed by the local warlord, Tokugawa Ieyasu. Heavily outnumbered as his own army was, Ieyasu overrode the advices offered him by representatives from his ally, Oda Nobunaga, as well as some of his own retainers, and chose to oppose Takeda's passage through his territories. For his part, Takeda actually hoped to avoid any direct clash with Ieyasu. That hope was to be denied him.

Encountering Ieyasu's army at Mikatagahara, a high plain in Totomi, Takeda drew up his army in a 'fish scale' formation - one that combined the virtues of defensibility and aggression - in the hope of inducing his outnumbered adversary to attack. In this, Takeda got his wish. 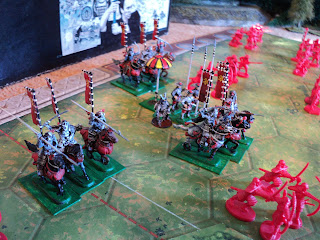 As can be seen from the pictures, this action was set up on my Memoir '44 game board, using Shogun game pieces, and Zvezda figures. A few trees representing small woodland areas added to the 3D look of the thing.  Those Shogun game pieces are really very nice figures in their own right. 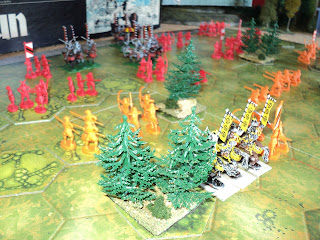 I adapted the game set-up from the Zvezda Art of Tactic Samurai Warriors scenario. The SW game board as slightly narrower along the battle front but deeper by a couple of grid rows.  The game was played under the Antoine Bourguilleau 'Sengoku' rule set found in the Portable Pike & Shot Wargame book. 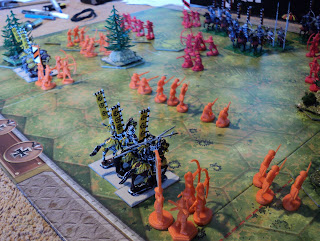 Planning to play test an idea about command and control, I did not use the 'Heroes' or 'Co-located Generals' rules. The generals being fixed to particular units, they survived, or otherwise, with their units. That is to say, if their unit was wiped out, the general went with it. This was to have certain implications in respect of command and control.

Although M. Bourguilleau's army lists included just one general (army commander), it seemed to me that the rule set offered room for more than one. I have also been concerned that his method of unit activation would lead to rather 'piecemeal' sorts of battles: in general, less than half the army doing anything. This concern I found particularly acute given that close combat is not - and can not be - mandatory between enemies in adjacent grid areas. Now, it is possible, of course, that battles of the Sengoku wars tended to develop the way the rule set seemed to me to indicate. 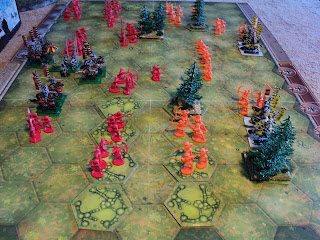 At any rate, methought this could be mitigated by having several commanders. I notice in reading accounts of the Sengoku wars that they are replete with personalities, including sub-commanding retainers or allies of some central figure such as Takeda Shingen and Uesugi Kenshin. The Samurai Warriors scenario having so many commanders, I reduced these to four on the Takeda side, and three on the Ieyasu. The units directly under their command may be seen in the leading picture and the hex-map.


There was one other idea I had in mind: a special Army Commander's unit.  We'll come back to this.
Recap of unit activation:
Following artillery fire (there being none in this game), both sides roll a die for initiative. In this battle I had Ieyasu's army (Orange) lead off, as they opened the ball by attacking.  Subsequently the sides both rolled, high roll going first.  As it happened - Ieyasu 'won' every such roll in this action!

Then whose move it was went through the following procedure to determine how many units could be activated.  Let's go through Ieyasu's first turn by way of example.

1.  Ieyasu's army comprised 13 units (I'll draw up the lists later on).  This number is divided by 6, the quotient truncated, to yield a base line of 2 x D6 to be rolled.

2. A further D6 is added for an 'extant' general.  There being 3 such worthies at the outset, we now have 5xD6 to be rolled.

3.  I rolled these 5, the total to be divided by 2 and, again, the quotient truncated to a whole number.

4. The count is, of course, repeated turn by turn, so, as losses of units and generals mount, the fewer will be the dice activated.  This got quite noticeable as the battle ran its course.

It is not a bad idea to work out what might have been the expected  mean activation scores for the two armies in their first turn:

Late in the action, with Ieyasu hard pressed (having lost a general and several units, and reached his 'exhaustion point'), his army rolled a 9, and was able to activate just 4 units. Not a great roll when trying to break off an action!

(By way of comparison, suppose Ieyasu had only the 'per book' 3D6 to roll, and rolled 6,5,4 a total of 15.  That would have reduced to 7 units activated out of 13 - a little over half the army.  I think I like having the extra generals!)

Army Lists for the Battle of Mikatagahara:

The commander's pavilion (or 'tent') was the 'special unit' I had in mind. I see this as a static unit that can fight, but does not move.  It still adds, however, to the number of units counted for activation purposes.

Posted by Archduke Piccolo at 5:06 PM

Email ThisBlogThis!Share to TwitterShare to FacebookShare to Pinterest
Labels: Sengoku