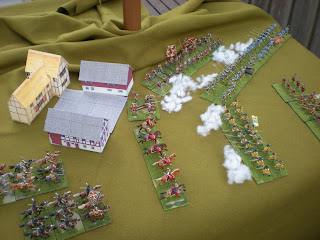 It's looking like a month of not a lot happening, so I thought I'd just show some pictures of a 30YW project that died some years back (waiting for me to finish them off!). I had just written a one-brain-cell rule set for 30YW/ECW when DBR came out.
DBR proved to be quite popular, I recall playing a lot of Spanish vs Dutch games in the late/mid 1990's with 15mm figures, and experimenting with Ottoman Turks (using Byzantine DBM stand-ins would you believe...?).

But I couldn't make up my mind to re-base my plastics for DBR. I knew what would happen. Sure enough! It was like magic. Almost the moment I switched to DBR format, interest in DBR in Christchurch fell away to nothing. Not that anyone else at the time had 25mm armies? The problem was that the rules had at the time been insufficiently developed before publication - at least, so it was felt at the time. My argument that they were salvageable fell on ears attuned to a different story.

These days, a degree of interest has been revived, but I am perturbed to find that in the interveing 10-12 years, not a lot has changed (not to mention WRG's usual opacity creates the standard stupid arguments).

Now for some more piccies... 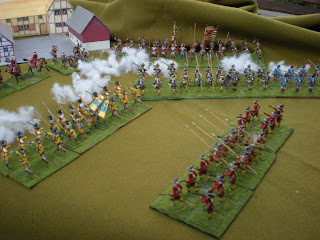 The pictures are posed as Swedish Foot attack an Imperial battalion that is supported by a gun battery. Imperial horse gallop to the rescue...
The figures are all from the Revell 30YW range, except for the light horse, which are HaT Mamelukes. They paint up very nicely as Imperial mounted Croats! 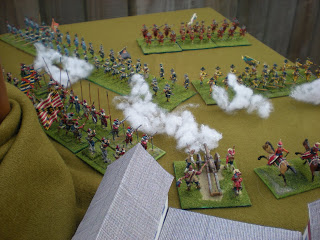 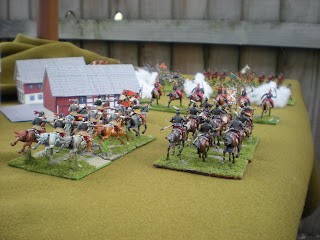 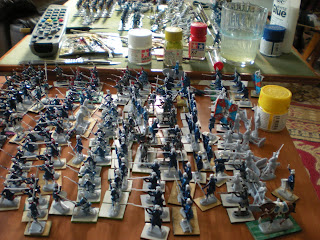 In the following picture, all the marching figures have been consolidated into the Electoral Footguards (bearing an astonishing similarity to the Prussian 'Garde' of the 7YW!). Rather larger than my usual 36-figure unit, this has 44 - though I haven't made up my mind whether to have 5x8-figure companies, or 4x10-figure coys. 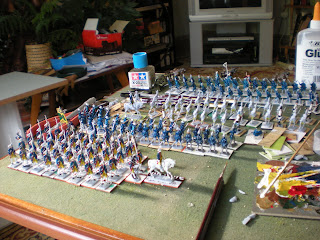 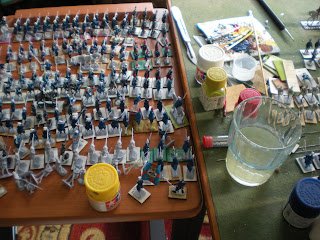 Not having a permanent set-up, this is a reasonable substitute (my wife bought me the split table/easel for Christmas - the green felt bit is my chessboard upside down...), the upside of which, I can get to watch 'Big Bang Theory' whilst painting the boys...
Posted by Archduke Piccolo at 12:41 PM