Affairs of State: a breakfast conversation.

Continuing the narrative of the previous posting. The Archduchess Marina-Harmonica has just read out the the missive from Cornelius Hendricus ter Plonck, Bishop of Ulrichstein for aid in restoring order to his country, riven by famine, distress and revolt. Meanwhile, elsewhere in the Empire, 3 days' march from the Ulrichstein border, a certain Baron Glockenspiel has been exercising a corps of troops: horse, foot and guns.

The Emperor Marinus-Violoncello has asked for her thoughts on what she has just read...

Archduchess Marina-Harmonica did not reply at once, starting on her breakfast before it became too tepid, pondering the while. It was just like her father the Emperor to spring affairs of State upon her at odd moments of the day, elicit her thoughts about whatever issue might arise, pick apart her arguments and decisions. This practice had begun when she had turned eighteen, and had been going on for a couple of years, now. At first she had hated and dreaded these sessions, but now... Now, she was developing what she considered to be a perverse kind of enjoyment out of making decisions that might redound to the good of the Empire. For his part, the Emperor Marinus-Violoncello was extremely pleased to find in his daughter an apt pupil. She would need to be. 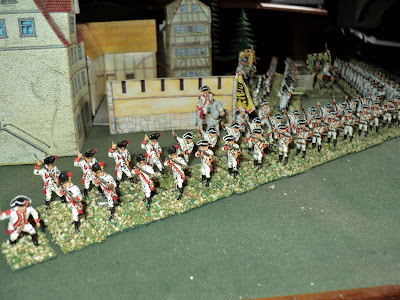 'Poor man,' said the Archduchess, 'He seems genuinely concerned even for the non-Catholics of his country. But he's out of his depth. We must, of course, give him our help.'

'Quite right,' the Emperor's voice, strong and deep yet for all his fourscore and three years, rattled the cutlery, 'Supposing what we have just read is true. What sort of help?'

'Supplying the food shortage might be a start,' mused Marina-Harmonica, 'But oughtn't that to have happened already?'

'Aye...' The Emperor draw out the word, 'We did supply some of our small surplus, not that it was much. I think Cornelius might have been a bit naive in whom he entrusted the transport and distribution of what was supplied to the stricken regions. There are certain types of merchants who will do anything - lie, steal, bear false witness - anything, if there's a profit in it. My dear, you will scarcely credit this, but there are those of the schismatic faiths - ours too, I imagine - whose pretence of predestined afterlife in God's house permits them to acquire wealth by any means - openly to commit unspeakable crimes - just to show they were born in a 'State of Grace'.

'Before God, how could people be so, so ... avaricious, so prideful?'

'Yes, well, there you have me. But then, you and I are not so well placed to judge. The poor and ignorant, they would be in a better position to visit upon the pious thieves who robbed them, were their understanding a little greater. But they believe what their polemicists, propagandists and demagogues tell them, the poor wights.

'The time has past for food supply in any case. I have no doubt that Cornelius has kept records. I certainly have of what we supplied. Our contribution wasn't so much, at that, but what we could afford. But whatever was sent apparently disappeared.'

'Do you think the Bishop might have been hoarding the corn?'

'Not for a moment. Cornelius was a punctilious Servant of God when I knew him in our young days; a punctilious Servant of God he remains. Unambitious and not very effectual - in fact even on those grounds I'd not credit him with conniving at a food shortage to further some end or other... And he's getting on, as I am. But he's a Man of God, no error.'

The Archduchess turned to the matter of the armed insurrection. 'We should send troops to help quell the rebellion. I infer from the letter it is by no means a servile revolt?'

'It is not. That Antoine Noilles is a notable and merchant of considerable standing and wealth. His great-grandfather, I believe, must have been one of those La Rochelle Huguenots who settled in northern Germania to escape King Louis's persecutions of just over a century ago. Other Ulrichstein merchants and notables are also involved. That so-called Marshal-General of Zerbst - Ritter von Rancke - was not one of the merchant class, but a mercenary of some military experience, and a petty notable... No, there is more to this than a servile revolt. 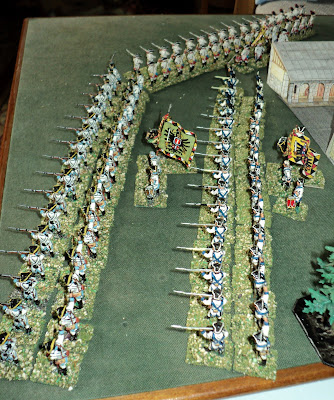 'Meanwhile, what Sir Eccleston tells me,' continued the Emperor, 'is sufficiently disturbing. It seems that Herzog Paul of Rechburg does indeed have his sticky fingers busily deep in this particular pie. Word has leaked out that the Herzog's so-called master-spy has concocted some story that this whole affair was at the connivance of the Bishop, and even myself!'

'That would not be possible, surely?'

'Actually, false as they are, such accusations are plausible enough as far as they go. There have been precedents. But in this instance, Herzog Paul would have to explain how Cornelius conjured up the floods -'

'An insightful conjecture, my dearest daughter. It seems to be true that the Reformist religions have adhered to beliefs in witchcraft at a time when even the Iberian Inquistion no longer carries out witch trials - dismisses such charges out of hand, withal... No: witchcraft will not do. Opportunism is the best they could argue. To what purpose would the Bishop plunge his country into unrest and insurrection? Bishop Cornelius's sensitivities against coercion are too well known to form a credible argument concerning re-establishing unity of Worship. Yet I can think of no other motive that would animate one such as Cornelius.'

'Yes... and then again... no. The problem with the Reformist movement was that itself splintered into several ... I don't know ... factions, if you will. Lutherans, Calvinists; Puritans - who might be one of those, or something else - Methodists, and a whole bunch of smaller and more ... erm ... exotic faiths, denominations, cults and sects... Each would be the 'One True Faith', as we believe ours to be, but would have to overcome the resistance of the rest. So the best they can push for is tolerance. Of course they demand tolerance from others for themselves, less often of themselves for others...

'In the meantime,' Marinus-Violoncello resumed his line of thought, 'Herzog Paul apparently professes to believe I have ambitions to acquire the lands of the Bishopric for the Empire.'

The Archduchess allowed herself a cheeky grin. 'Have you no such ambition, Papa?'

'What do you think?' snorted the Emperor. The snort turned into a prolongued wheeze, then an even lengthier fit of coughing. The Archduchess eyed him apprehensively, ready to call in the Court physicians. As the upheaval gradually subsided into a stertorious breathing, his elder daughter could see, not for the first time, just how old and frail the Emperor was becoming.

'Methinks, Papa, that had you any such purpose or intent, you would have compassed it long since. At eighty-three, you are not going to be embarking upon whole new political adventures now...'

'The first Edward of England did!' tartly remarked her father, rallying somewhat. 'But you are right. I've never cast covetous eyes upon Ulrichstein. Whatever the Herzog would like to pretend to the world or to himself, the Imperial Guarantee provides for the continued existence, integrity and sovereignty of the Bishopric as a political and ecclesiastical State, together with its allegiance to the See of Roma. I was never about to renege on that Guarantee. Besides which, the Bishopric is a valuable buffer State that we pay for by slightly elevated prices for goods we import through the Herzog's Helgoland seaports. He should remember that. 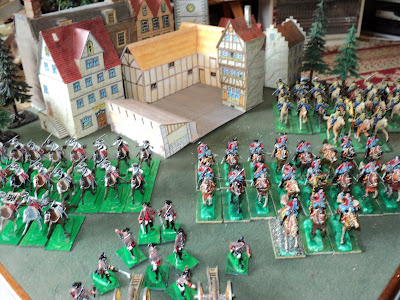 'It is fortunate that we have this letter,' The Emperor indicated the Bishop's epistle lying beside his daughter's breakfast plate. 'No one can say, at least, that our action was unilateral. This will justify and legitimate our military intervention.'

'It will take weeks to gather even a small army corps,' mused Harmonica, 'Even with cousin Piccolo in charge of mobilising it...'

'There's Glockenspiel exercising troops about Gladno, in Trockenbeeren...' murmured the Emperor. Baron Glockenspiel had been exercising a corps of three foot and three horse regiments with an artillery company for several days now. 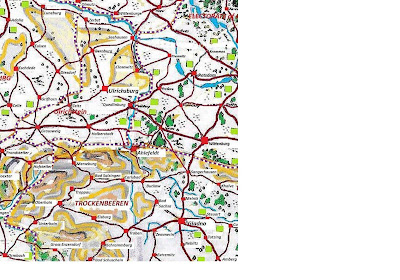 'Only three days from the border, too,' said the Archduchess, 'A bit of luck you ordered these exercises some weeks ago!'

'Yes...s, isn't it?' observed the Emperor blandly. His look gave nothing away, but his daughter knew her father well.

'You foresaw the need, didn't you?' she accused. 'You cunning Papa! But... This might not be such a good look, you know.'

'Don't see why not,' the Emperor replied with some asperity, 'No one can reasonably accuse Me of massing an invasion force on the border. Three days is far too much notice to give to a potential victim. Be it noted, I made no secret of Glockenspiel's exercise programme, but announced it to the world. It's not as if autumn military exercises in the Gladno region are unprecedented. That Rechburg will place an evil construction upon my foresight can not be helped.'

'At that, I waited until asked before intervening. Here is the letter -' the Emperor grunted as he reached across to pick it up, '...that legitimates Imperial
involvement: duly authenticated with Cornelius's own signature, the Bishop's private seal as well as the Bishopric's Great Seal, and brought by hand of his Special Envoy.

'What can Paul show? A pretence of restoring a disorder he appears to have contributed in fomenting. He makes much of refugees crossing his border, but Kurfurst Phonix has been reporting the same in Altmark-Uberheim, and a few have even trickled into Imperial lands, though we're so distant from the seat of the troubles. Sir Eccleston tells me further, that internal refugees flooding into the less affected areas are becoming a problem in southern Ulrichstein.'

Marina-Harmonica took up the line of argument. 'All the same, the Bishop lacking the resources to do so, Herzog Paul enters Ulrichstein - unasked - with an armed force to restore and maintain order in that country. Of course, such intervention will come at a cost, which Ulrichstein will have to defray. Let me see... The price of Rechsburg's assistance in this matter will be ... Ulrichstein itself?'

'No doubt about it,' agreed the Emperor with satisfaction. 'Mind you, legal niceties won't stop him. But they may help motivate others. Glockspiel's Corps should be plenty to defeat an insurrection and restore order, if not harmony. But if Rechburg does invade, Glockenspiel will likely be overmatched. Hence Piccolo's muster over the river from here. I've already despatched letters to Altmark-Uberheim, Ursaminor and M'yasma. We might have to call upon them for contingents...'

'We'll have to move quickly,' said the Archduchess, reaching for the bell, 'orders for Glockenspiel must go out at once!'

'The orders were sent last evening, the moment Sir Eccleston was announced unto Our presence. Glockenspiel will be on the road within forty-eight hours.' 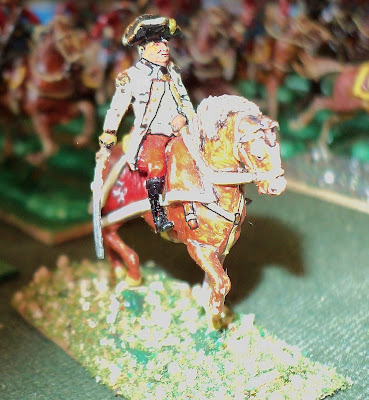 Archduchess Marina-Harmonica eyed her father the Emperor with the admiration of an apt student learning at the feet of the great, alloyed by a wistful apprehension for the future without him. For his part, the Emperor returned a fond, but equally concerned regard. She would be succeeding him, sonless as his reign had been, and would be facing a more hostile world. The future Empress Marina-Harmonica had before her the one obstacle that Marinus-Violoncello had never had to overcome: Salic Law.
Posted by Archduke Piccolo at 12:13 PM