The story so far: Whilst checking out a narrow trail through overgrown country, a strong patrol of 14 British Grenadiers commanded by Lieutenant Banastre Mirleton, has been ambushed by a 9-man Yankee squad commanded by that seasoned and wily Sergeant, Gene Wappcapplett. The opening volleys have felled two grenadiers, and as the Americans hastily reload their muskets, the British are preparing to respond... 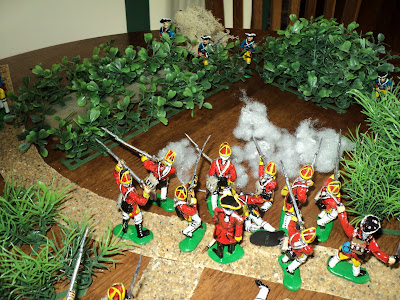 No sooner ordered than carried out. Considering the range and the cover, the grenadiers' return volley proved remarkably effective, bringing to earth one man from each 3-man enemy section. 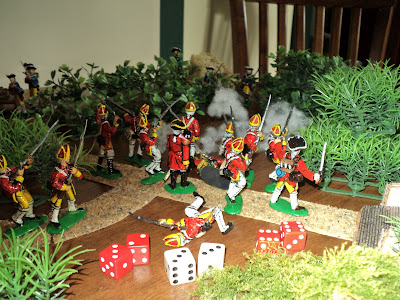 Now, a brisk firefight ensued. Sergeant Wappcapplett's section had reloaded betimes and rounding the corner, came face to face with the three grenadiers - Soldier Holcomb having joined them - acting as flank guard. In the brief exchange of short range fire, the American musketry failed to improve upon their earlier performance. Only the Sergeant with his pistol (the green die) scored a hit. Not so with the grenadiers. All three dropped their man - a tremendous volley! 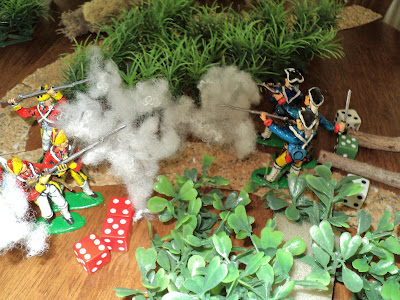 In the main action, woeful Yankee aim failed to register a single hit. Soldier Pickersgill proved no more accurate upon the grenadiers' side.
(This was a mistake. Better, and more realistic, would have been for Pickersgill to have withheld his fire until next turn, when, having reloaded, the whole main body could have let rip. This error was to be compounded [slightly] by some not very good timing...) 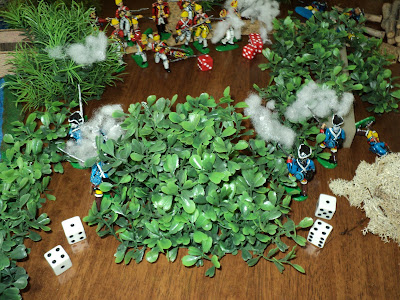 The Americans having now lost five of their number - just four remaining in the fight, and they frantically reloading - Mirleton ordered the charge.
'Up and at 'em, men! Now's our time!' 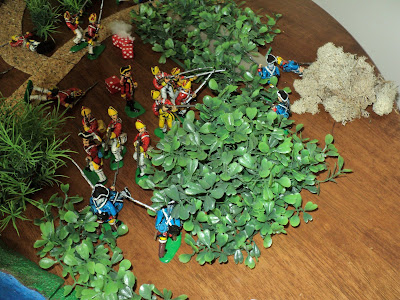 Actually it wasn't. Instead, he should have fired his second volley now, and then charged. The likelihood is ... well, let's just see what happened anyway. Another point: there doesn't seem to be a 'charge' move in the rules. Cross-country movement for foot troops is a PART move: 4 inch. The FULL 6" move for the charge seems reasonable. Having said that, it would have made no difference in this action, as the Americans stood just under 8" from the trail.

In the circumstances, hurriedly reloading their muskets, having taken heavy loss, and with yelling grenadiers bearing down upon then with bayonets fixed, it would have been excusable for the Yankees to have decamped betimes. Not these fellows. Veterans of many a desperate fight, the Americans were aiming their muskets before the British had got much more than halfway across the intervening space. 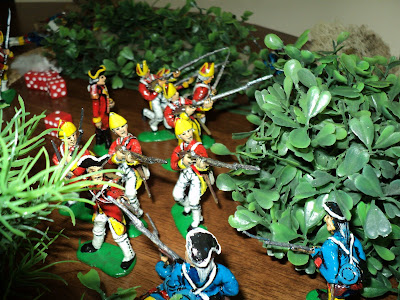 This time! A blistering short-range volley staggered the British, three of the nine attackers failing to make it across the clearing. 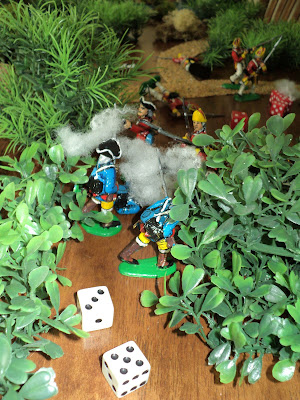 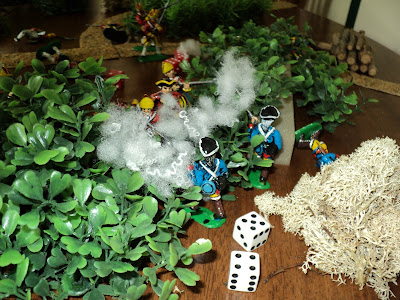 Staggered but not stopped, the Grenadiers ploughed on into the Americans. Sergeant Higginson with two others swept into the riverside section; the Lieutenant and two more into the other. Outnumbered though they were in the confused scrimmage of butt and bayonet, the Americans gave as good as they got. Two more grenadiers bit the dust - one of them Sergeant Higginson himself - but as many Yankees lay there beside them. 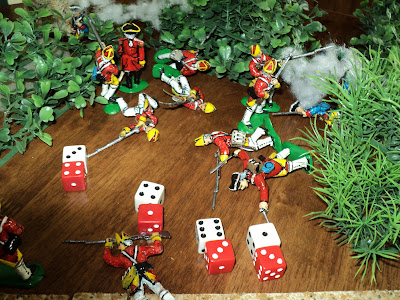 This proved not a very good test of the OMOG close combat rules involving disparate numbers. The combats were divided into two combats at 2:1 and two at evens. The Yanks won both the evens; the Brits both the 2:1s at the first combat and without even having to adjust the scores. Couldn't really conclude much from that. [Red dice, Limeys; White dice, Yanks] 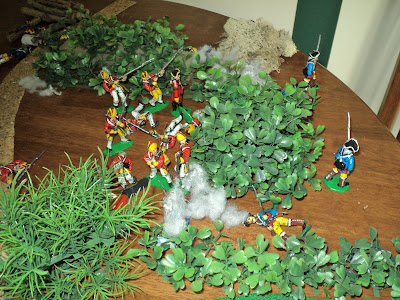 Having risen so magnificently to the crisis, the two surviving Americans, realising it was high time they departed the scene, duly skedaddled into the undergrowth. Lieutenant Mirleton and his three men rejoined the two that had remained behind on the road. Judging by the 'butcher's bill' the Yankees could claim a success inflicting eight casualties for the loss of seven. But the grenadiers had fought their way out of the ambush and driven off the enemy. Having retained, as it were, the field of battle, the British were free to remove the wounded on both sides. Sergeant Wappcapplett, though badly wounded, proved a most valuable capture...
Posted by Archduke Piccolo at 2:05 PM