Ambush at Conrad's Creek - a note on terrain 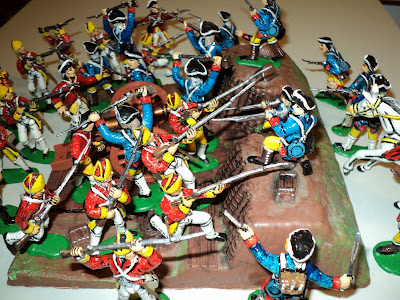 The OMOG game system for toy soldiers is designed for play using whatever casual items are available to be scattered about a playing surface - a kitchen table, say.
An ashtray becomes a gun emplacement or strongpoint; cups and saucers stand in for buildings; knives and forks fences, walls or earthworks; books and newspapers become rising ground. It is a war game for non-wargamers, according to the author.

But there's nothing to stop one supplying something more generic. Now, most of my wargames terrain pieces are designed for my 20-25mm armies. How to adapt to 60mm figures?

This last action featured a river, which in this scale became a creek, spanned by a scratchbuilt stone bridge, becoming in this scale small enough barely to accommodate a cart or narrow wagon. The roads and trails are what I use for metal roads in general, strips of birdcage grit paper (they make fine roads). Finally, the undergrowth comprised bits of model railroad 'lichen', moss from the backyard, but mainly plastic aquarium plants you can buy in mats that you can cut up.

I find these last very versatile. They can represent scrub and secondary growth; reeds, hedgerows, standing crops. To give a bit of height to some of the bushes, I just placed a smaller section on top of a larger one.

Finally, the 'logs' were just bits of twig gathered whilst pruning some of the plant life about the house.

Simple stuff, not too expensive, and I didn't have to buy anything specific for this scale. How about actions in build up areas, then? Well, I have plenty of small boxes...
Posted by Archduke Piccolo at 1:30 PM