The following action between the combined Imperial and Ulrichstein forces against a Rebel army, was fought solo. Needing a plausible set-up, I used the first scenario out of Charles S. Grant's Programmed Wargames Scenarios. The forces involve were somewhat different from those suggested by the scenario, but the odds were fairly similar. The Rebels' main disadvantages were the lack of horse compared with their opponents, and more serious, their lack of training...

As the dawn light of 27th September stole over the hills and the village rooftops of Lobrau and into the plain, the rebel lines could be discerned, formed up and awaiting the Loyalist and Imperial attack. It seemed as though Antoine Noailles intended to hold the line of hills, rather than risk action in the plains with his relatively untrained troops. Numbering his battalions I to VIII from the right flank, he retained perhaps half his strength in the centre about a small farm, into which he had pressed IV Battalion by way of a garrison. Upon the eminence above Lobrau he kept two battalions (VII and VIII), together with his single cavalry regiment; and on the right, I and II Battalions with a half-company of artillery. The other half comapny and four battalions held the centre.
The following four pictures show the rebel dispositions.
I and II Battalions 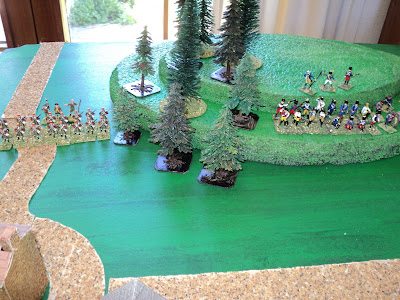 III and IV Rebel Battalions. A rather ... erm ... nervous artilleryman seems to have got into the picture... 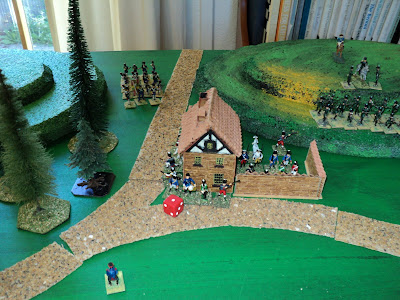 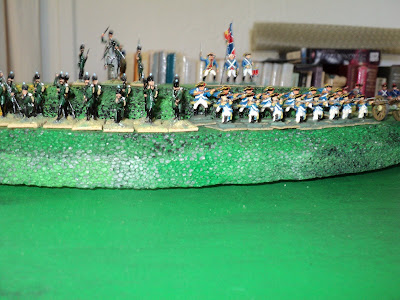 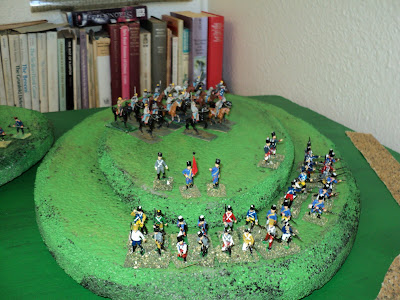 With no opportunity for reconnaissance the day before - the lighted campfires didn't give much away either - Glockenspiel had massed his Imperial troops with the Horse about to sweep around and through the village of Lobrau - led by the Grenadier Company of Hildburghausen Infantry, whilst the infantry were to incline slightly to the left and assail the Rebel centre. Linking the two groups were 6 pr battery and the Cuirassier Regiment Trauttmannsdorf. Far out on the left, the Ulrichstein contingent made ready to advance upon the Hassenhof hamlet. There was no finesse to Glockenspiel's plan. If he wanted to crush the rebellion, then crush the rebels he would. 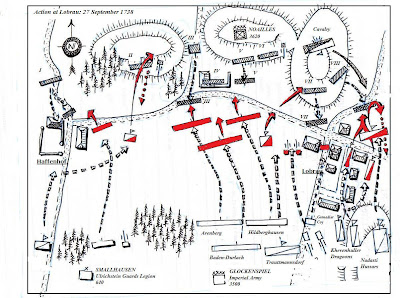 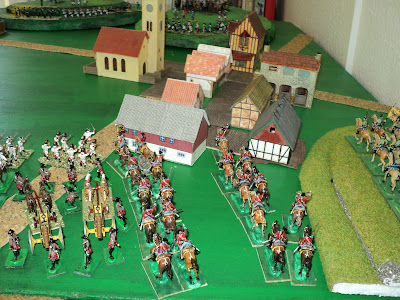 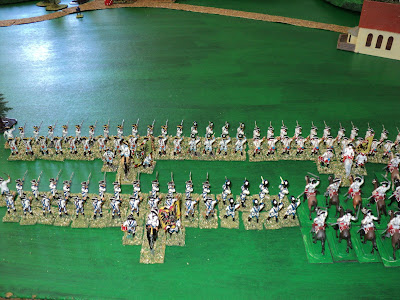 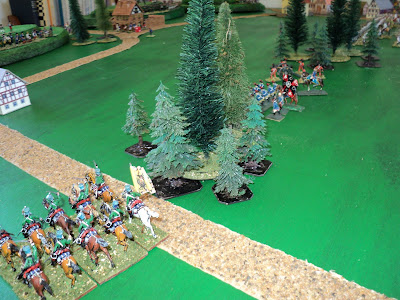 As daylight spread over the plain, the Imperial troops were already on the march, the long lines advancing sedately towards the hills. The rebel half-battery near Lobrau opened up at long range. 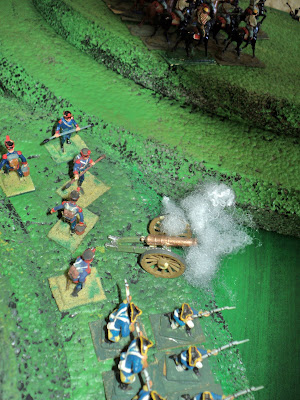 The practice was remarkably good: to the jubilation of the Rebels, the first salvo at once carried away a file of Hildburghausen infantry. The hills echoed to Rebel cheers. The Imperialists responded with not a sound. Their grim silence was eloquent enough. The battle was on. 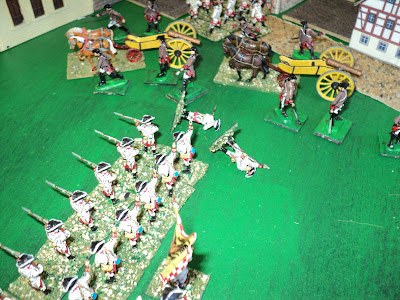 To be continued...
Posted by Archduke Piccolo at 9:32 PM