No sooner had Marshal-General the Baron von Glockenspiel received his orders, signed by the Emperor himself, than it was boots and saddles for his Army. Three days later he crossed the Ulrichstein frontier and marched into Halberstadt to be met by the anxious Bishop Cornelius ter Plonck, and a rapturous welcome by the townsfolk. 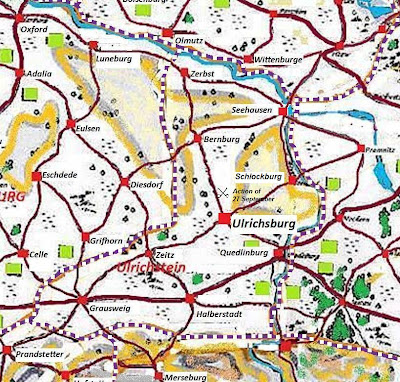 'There's not a moment to be lost,' quoth the Bishop, whereat the Baron continued his march the following day. There being no good direct road to the capital, the Imperialists had to take the Zeitz road and continue from there. Nevertheless, by hard marching, the Imperialists arrived at the capital, Ulrichsburg, shortly after midday of the 26th September.

The welcome at Zeitz and Ulrichstein had been as enthusiastic as that at Halberstadt, but Glockenspiel observed grimly not a few glum faces in the crowds. A small detachment of the Ulrichstein Diocesan Guard - the survivors of the Musketeer Company and an artillery section - were on hand to conduct the appropriate ceremonials, but the Bishop and the Baron agreed to cut these to a minimum. This was at least partly due to the advent of a dusty messenger arriving down the Bernburg road.

He had an urgent message from Freiherr von Smallhausen, commander of Ulrichstein's little army. Hearing that a rebel army was on the march from Bernburg, Smallhausen had marched forth with his Grenadier and Arquebusier Companies, the Hussars and an artillery section - a mere 640 troops (32 figures)and 4 guns (1 piece)with which to oppose the Rebel horde.

Expecting that Rumour would have multiplied their numbers, the moment Smallhausen got a glimpse of the Rebel host, he knew this was a foe too numerous for his little band. Over 3000 infantry (152 figures in 8 battalions)formed the core of the enemy army, backed by a regiment of horse (19 figures) and a light artillery company (2 pieces and 10 figures), the whole amounting to at least 3600 officers and men. At their head was the redoubtable merchant-adventurer Antoine Noailles.

Outnumbered almost six to one, Smallhausen's force fell back slowly. In the meantime a fast rider was despatched to Ulrichsburg to warn the town, and, if possible, to summon help.

As the messenger was gasping out his tidings to the worried Bishop and grim-gaced Baron, the rebels were continuing their march. They would certainly be in the capital on the morrrow, even if, as became clear, von Smallhausen had resolved to make a stand.

Late though the hour, Baron Glockenspiel barked out his orders: the march would resume. Hours later, the sun was already dipping below the horizon as the Imperialist army, tired and dust-laden, reached von Smallhausen's gallant band.

'The Rebels seem to have halted for the night in the heights north of Lobrau village,' reported the Ulrichstein general.

'No chance for a reconnaissance, then,' remarked the Baron, observing the distant campfires in the hills above. 'I daresay he knows we have arrived, too.'

He glanced at the sketch map von Smallhausen had handed to him. 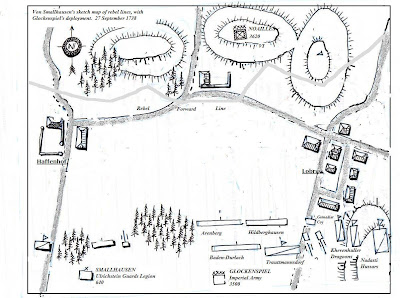 'We'll attack him at first light,' the Baron said. 'I'll deploy my corps with the cavalry behind this village - Lobrau is it? - and the foot to its west side. Do you cover that road through that little hamlet - Hassenhof. Don't want the enemy to fetch around our right flank, eh, what? Then in the morning, sweep forward on a wide front an' straight over the hills.'

View of the Ulrichstein Diocesan Guard Legion as seen from the rebel lines. Part of the Imperial Corps is also visible... 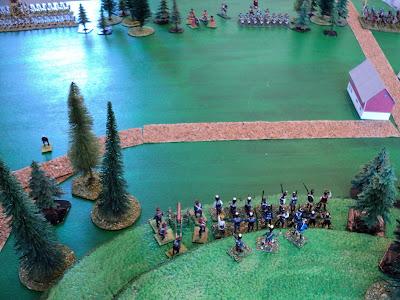 If the Ulrichstein general had any misgivings, he wasn't saying. He knew Baron Glockenspiel by reputation as one filled with a slow, deliberate knd of pugnacity, whose attacks were more likely than not to have the stately sweep of an avalanche at the beginning of its descent.

Given the ridges and hills upon which the enemy stood,
it was easier to imagine the avalanche coming the other way. The 3500-strong Imperialist corps (108 foot, 57 Horse and 10 artillery figures, plus 2 6pr pieces), added to his own few hundreds, seemed to von Smallhausen none too large a force for the morrow's task...

The Imperial Horse, ready to sweep around Lobrau village... 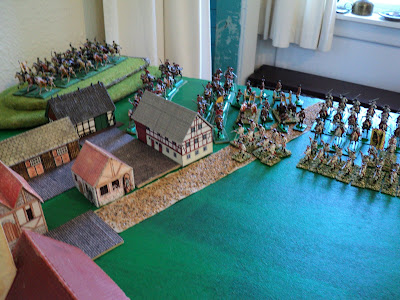 To be continued...
Posted by Archduke Piccolo at 3:58 PM