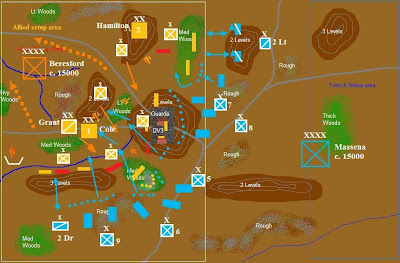 Continuing the narrative of the Prince of Essling, the Marshal Massena to his Emperor, le Tondu in Paris, concerning the French victory over the Army of Portugal at Guarda.

Having determined the location of all our enemies, we were able, Sire, to put into immediate effect our overall plan of enveloping the southern flank. In the meantime, the holding action of Mermet's Division continued to pin the defenders of Guarda itself and the mountain upon which the town stood. By midday, the place was almost surrounded already, and the Portuguese line infantry keeping open the road northwest out of the town was taking heavy losses and barely hanging on. A battalion of 6eme Legere had already infiltrated behind the town and cut the west road. 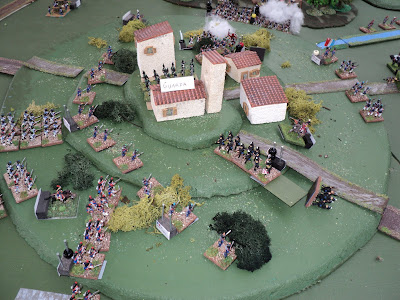 Meanwhile, it transpired that a battalion of 38th South Staffordshire was waiting behind the northwoods to take in flank any push by our people along the north face of Guarda Hill....

Had 4th division been able to push the Portuguese out of the North Woods, the position of 38th Sth Staffs would certainly have been compromised, but the enemy refused to budge, even after II/25th Legere enveloped their right flank whilst a battalion of Labassee's 8th Brigade engaged them in front. 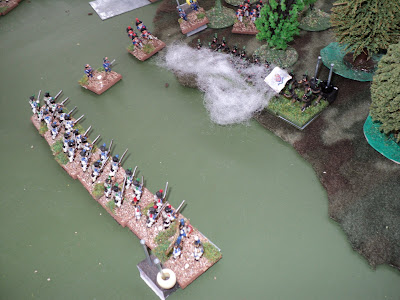 As the action around the town proceded thus indecisively, events were taking their planned course aloung the stream that flowed westward from the southwest corner of the village. As the Allied infantry hastily scrambled back across to their own side of the stream, General Loison's light infantry were swiftly following up, supported by the battalion columns of line infantry. 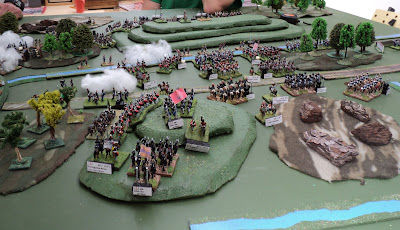 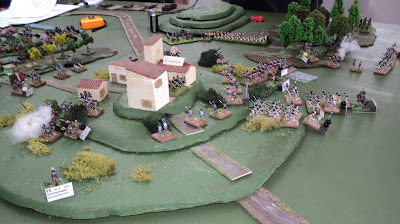 Bent in a right-angle as the Allied line had become, naturally a weak point had developed at the point of the angle. Already the Duc d'Elchingen was striking at and through that point. Despite their valiant resistance in that sector, the defending English artillery and infantry (9th Devonshire) were overrun, many of the guns destroyed if not captured, and the English colours taken by 6eme Regiment de Legere. But even before then, as mentioned earlier, elements of our light infantry were established firmly upon the western slopes behind the town. 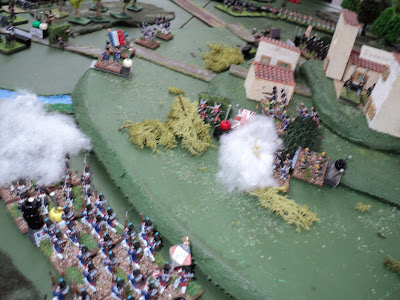 Fixed as they were along the river line and defending the village and its environs, the allies foung it difficult, despite the presence of large reserves to contain the irruption of French troops into the angle of their position. Brigade General Simon's chasseurs and voltigeurs were bringing the disordered Allied infantry under fire already... 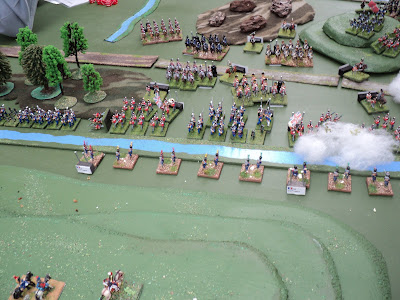 ...and soon masses of our troops - Simon's 9th and Marcognet's 6th Brigades were pinning down and wreaking heavy execution among the defenders. 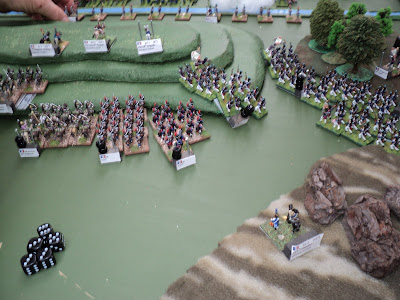 A general view of the battlefield. General Loison (Geoff) and Marshal Beresford (Ross) contemplate their next moves... 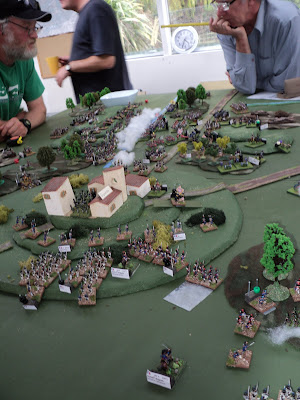 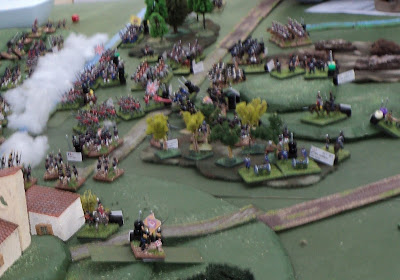 Not content simply with holding his position behind the town, Ney ordered Bardet's 7th Brigade to exploit on through the woods at the foot of the far slopes of Guarda Hill. There they dropped into fire action behind an Allied company of Light artillery before either was aware of the other (Fact was, Ross - General Beresford - his attention fixed on the riverside action, hadn't taken enough notice of events in that part of the world, which meant the infantry of 6th Light got into the woods without coming under fire from the guns). Although the Allied guns hastily turned upon the backs of the French skirmishers, their fate was soon sealed when they were overrun by another French unit following up. 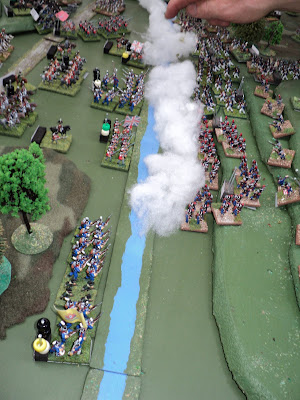 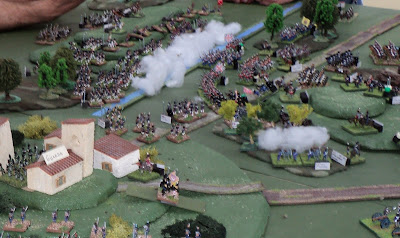 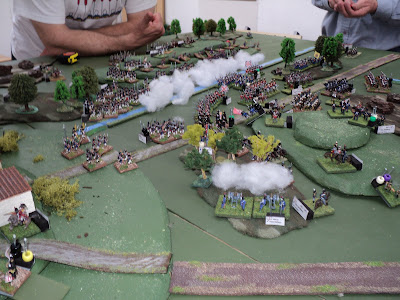 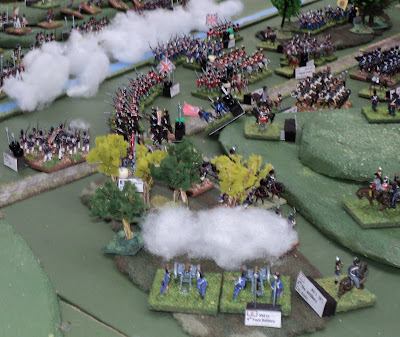 As the day drew on with the Allies found themselves under unremitting pressure, the English Marshal suddenly ordered a general withdrawal. The Guarda garrison managed to break out by the last road available out of the town, and the enemy made off after incurring heavy loss.
At a cost of perhaps 1300 casualties on our side, we inflicted, we estimate, three times that number upon the enemy, and took some 450 prisoners (100 of them English). The trophies of the day included 14 guns and two stand of colours (one of them from 9th Devonshire Infantry).
Guarda remains in our hands, and we believe our position between the Allied wings will afford us certain advantages in the coming campaign.