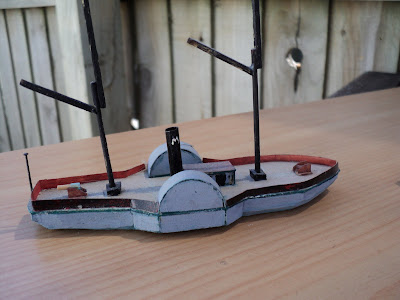 Above: the first of a number of Confederate steam rams/ gun boats. After all this time, I still haven't figured out how to build the 'walking beam' arrangement. It looks as though this vessel is missing a bowsprit, too. The masts could stand revisiting: the topmasts look rather too thick, as well.

This was intended to be a fairly 'generic' sort of vessel. 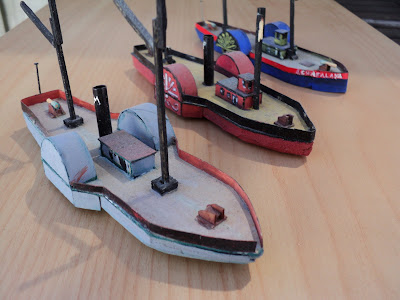 More CSA gunboats, armed fore and aft with rifled ordnance. Well... they would be if I had got around to completing those guns...
Rather than build specific gunboats, often named for Confederate generals and which survived maybe one or two serious actions, I gave them other names. The letters on the funnels serve as aides-memoire for Atchafalaya, Pontchartrain and Maurepas. 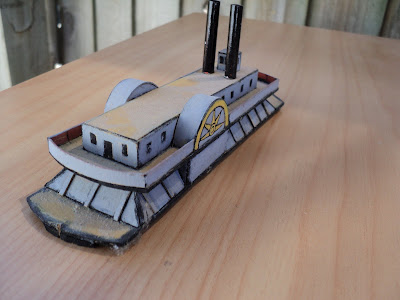 Here we have a generic Union vessel that might be a troop transport or maybe one of Col. Ellet's steam rams. This was made on the basis of a wood engraving, I think from Battles and Leaders 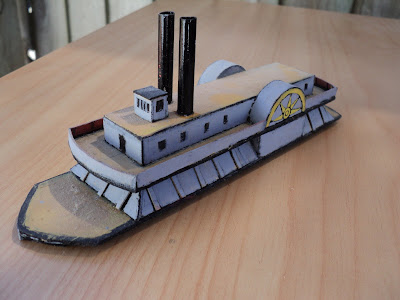 Another steamboat that might serve as a transport or as a steam ram. I don't recall what the basis for this vessel was - I think it might have been a picture of someone else's model. At the time I was building these, information was very hard to come by as to dimensions, design - even colours. At that, even professional modellers apparently have to make guesses as to what these vessel really looked like... 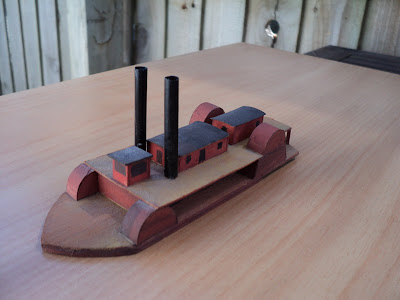 I think a little touching up might be in order, such as railings around the decks, lifeboats, that sort of thing...

Next time: A monitor, and some auxiliary boats and barges...
Posted by Archduke Piccolo at 11:34 PM