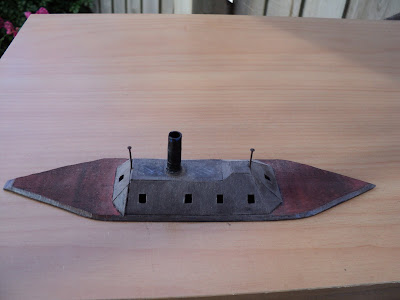 At last, a couple of CSA ironclad gunboats under construction. First, CSS Tennessee. 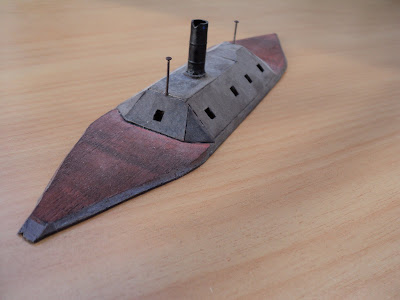 Some details need to be added, such as coamings around what seem to be netted openings in the roof of the casemate fighting compartment (?). I presume these openings existed in order that there be a bit of light for the gun crews and others to work with. It seems reasonable that some kind of netting be drawn across these spaces as protection against shell fragments and shrapnel. 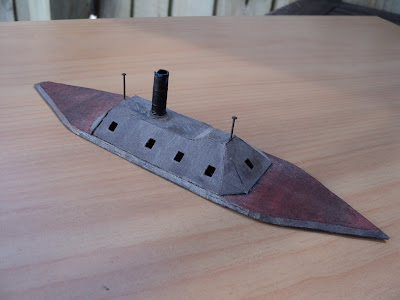 I also want to build up the bow and stern a bit, and add steering chains along the rear deck. Not sure what to use for chains, to be honest. 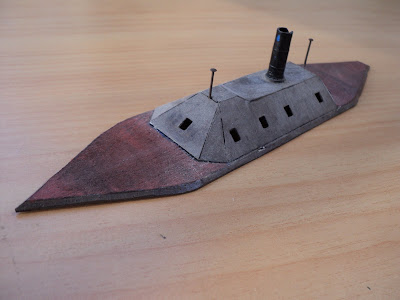 And, of course, the gun ports need guns and port lids. The latter were the swivel kind. As for the guns, although the Tennessee had ten ports, she carried 6 guns: a pivot Brooke Rifle fore and aft and two guns in each broadside. I'm planning on showing guns 'run out' through the fore and aft ports, and the middle two broadside ports, whilst the other broadside ports will be shown closed.

Now: the following is my 'first pass' attempt at constructing CSS Arkansas. 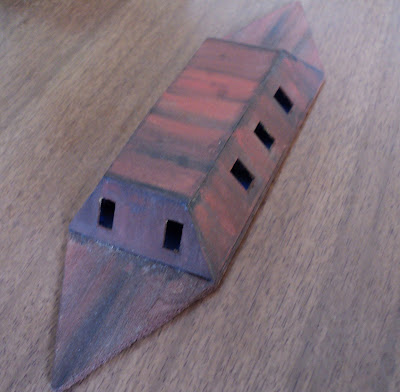 Not a success, as you can see. Part of the problem is a lack of information, though I have recently found out the vessel's dimensions - a big help! This ... erm ... model turns out to be too short by about a centimetre.

As it transpires, there is some disagreement as to what the boat looked like: one model maker depicting her as having vertical sides (which i suspect is a misunderstanding of the 'straight line' hull for at least the length of the casemated fighting compartment). Others show a distinct gap between the foremost broadside gunport and the other two. Here's an example from Stephen Lund and William Hathaway's downloadable PDF Modelling Civil War Ironclad Ships.

There is no evidence that I can discover to suppose any arrangement different from what I have assumed here.
But clearly something has to be done about the the vessel forward and aft of the casemate. Can the thing be reconstructed, or do we start all over again?

Meanwhile, on a different note - introducing a third belligerent in the wars of Jono's World: Sideon IV: the Archepelago of Sarbia. Here is one of its three aircraft carriers...

... and a squadron of light tanks from the Sarbian Army. 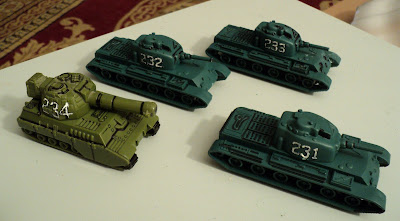 These were got from packets of Army Men type soldiers that included an over scale jeep (which will become a light truck) and a slightly under scale tank (which, with its gun cut back, becomes a light tank). Tank #234 is actually a water pistol (yep: the thing can actually shoot!) that has been kicking around the house for x-teen years or more. It has become a close support tank with a rather large gun.
(The packet also contained small 'stealth' fighters that will be hard to find uses for...)

Cheers - and my best wishes to you all for the New Year.
Ion A. Dowman
Posted by Archduke Piccolo at 1:27 PM