Well, the species in question are in fact floral, to wit: Roses.  This was one of those projects that I began full of enthusiasm and gung ho about ten or twelve years ago.  I don't know anyone who manufactures Wars of the Roses figures as such, but it seemed to me that the Hundred Years' War fellows would do. 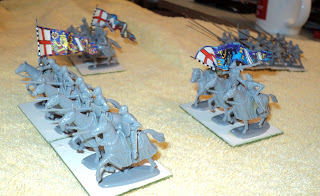 The pictures that follow depict where I reached in a fairly short time and have done nothing with them since. Based, modified and ... unpainted.  We begin with the mounted knights and commanders.  This is a Yorkist army commanded by King Edward IV, with Richard of Gloucester as his sub-general, and William de Hastings classed as 'Ally-general'.  The whole army was build along DBM lines, although I was already becoming disenchanted with that rule set (too many ill-considered amendments, to my mind, that wrecked a fine concept). 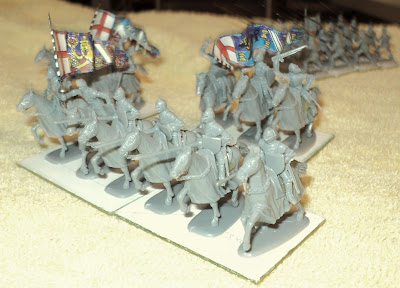 The banners are my usual wire and paper types, hand drawn and coloured with OHP pens.  Incidentally, I will regret the passing of the dear old Overhead Projector, because the pens - water soluble and insoluble both - are great for colouring paper flags.  A disc of sprue with a generous dollop of glue gives the flagstaff a vaguely lance-like look. 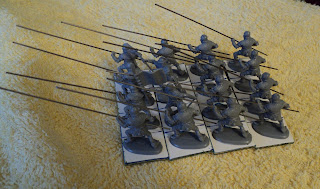 Above is the contingent of Burgundian pikemen.  These were adapted from halberdiers or billmen.  These were already a good pose, but the only ones really adaptable as pikemen.  A flag bearer and a knightly fellow on foot eked out the limited number of figures available . 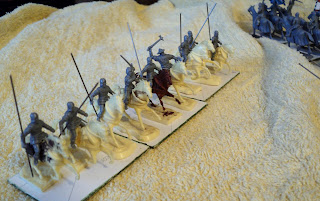 One troop type absent from the Revell set, as you can imagine, was the currour - a lance armed cavalry less well protected and armed than the ponderous men-at-arms. I selected a foot figure already standing rather aggressively with feet apart, trimmed off whatever weapon he was holding and added a wire lance.  A couple of other figures gave me a command element, although they don't sit their mounts as straight as they might. The horses I nicked from the Airfix Napoleonic Royal Horse Artillery set.

The lances are probably overlong, but I quite like them that way.  I have always felt the the Revell knight lances could have benefited by half a centimetre's extra ... erm ... longitude. 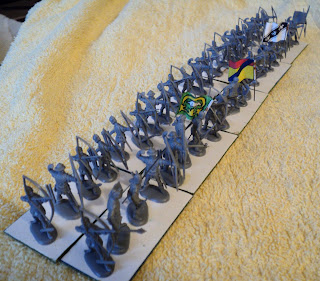 Now we come to the guts of the army:  the Yorkist foot.  The Revell box had rather a limited number of bowmen, so some other figures were issued with wire bows.  As I have been given to understand that the English long bow was, unstrung, scarcely distinguishable from a big stick, I didn't worry overmuch about appearances.

I further eked out limited numbers by placing on every other stand a knightly figure in plate armour and a standard bearer.  Two stands, then, required just 6 bowmen.  I could perhaps have placed 3 figures per stand, but, aside from being not 'per spec', would have looked too sparse. 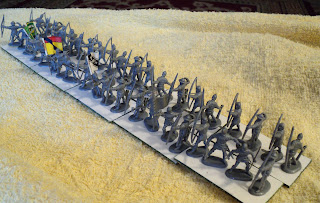 The flags will be replaced.  Now the famous Warflags site, very useful source though it is, is rather limited in it's Wars of the Roses range.  The bad part is that on several flags, the pattern on the reverse side has not been mirror imaged from the obverse.  Many wouldn't notice, and most that do probably wouldn't worry over it.  I do.  But my own efforts, based on information I had about distinguishing badges and symbols, I've never been satisfied with. 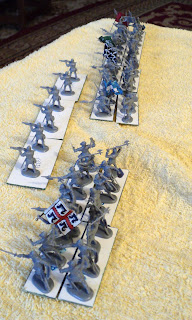 These final pictures show a line of skirmishing hand gunners, in the distance a body of billmen, and closer to a smaller group of dismounted men-at-arms.  Owing to the limited number of mounted knights in a pack, I was pretty much forced to leave these men-at-arms on foot, 'paying' for Bd(S) (9AP) as Kn(I) (10AP). 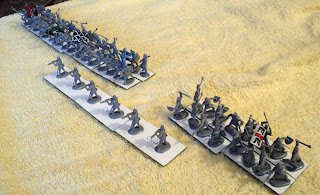 But then, I'm not into wargames competitions, the motivation for which I have been for well over thirty years at a loss to understand.  Also in the pipeline, though less well advanced is my Lancastrian Army.  Having acquired a few 'Sheriff of Nottingham' figures, I'll have a few 'levy' type stands, and some Italieri 100YW figures I bought several years ago will provide several of the bowmen and knights. 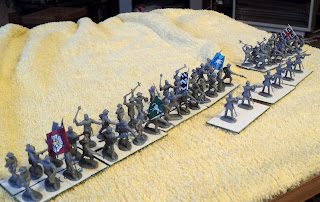 Meanwhile, what to do about the flags?  A couple of years back, an advertisement appeared on TradeMe in which the booklets featured in the pictures below were going for what to me looked like a song and a dance.
So I bought all four; no one else seemed interested in placing a bid.  Good luck for me.  The numbered flags are cross referenced to the associated nobleman or knight, with a brief comment on their affiliation.  The top booklet (by Pat McGill and Jonathan Jones) opens to reveal (inter alia) leaders' standards, beginning with Henry Sixt, and prominent members of the House of York.
The plan is to scan down the flags and select several for each side (York and Lancaster).  There are ways of 'mirror-imaging' to obtain a two-sided flag or banner; and of skewing the image in the vertical plane to give the printed out paper flag a better 'drape'.  I left the mottos off my hand drawn banners as being too difficult to render well in the scale I had designed them.

Posted by Archduke Piccolo at 6:31 PM

Email ThisBlogThis!Share to TwitterShare to FacebookShare to Pinterest
Labels: Mediaeval, Unfinished Projects, Wars of the Roses