Ulrichstein Campaign: The Last Stand of the Rebellion 2

As the Imperialists continued their steady and stately march,  Marshal Noailles could do little more than hunker down in the rear slopes of the Chateau Ridge, and in the strongpoint itself, and pull his cavalry behind the Farm on his right.

But the Chateau was proving something of a bone in the throat for the Archduke, flanking as it was any attempt to force the ridge, or to storm the east-facing earthworks

For his part, General Plodt was doing his best with his exiguous army to assist the Imperialists.  The Pandours had pushed the Rebel Jager half way through the East Woods, but  their drive had become stalled in the face of determined resistance.  The Electoral infantry also left the safety of the ridge crest and advanced upon the field works.  This was something of a thankless task for the Electoral infantry, under a galling gunfire, and unlikely to make head against the strong defence line facing them.  But for Plodt, and for the Archduke they were performing a vital function as the electoral guns brought down a hail of shell fore upon the Rechburg cannon.
Their masking work done, Prittwitz cavalry drew back to make room for the Electoral Winterfeldt and the Imperial Arenburg Infantry to engage the Chateau garrison.  Considering the protection enjoyed by the latter, the early volleys were deadly enough, but if the Rebels were to be forced out, the range had to be closed - or else an all out assault mounted.
In the centre, the Imperialists had paused in their advance preparatory to a concerted surge over the crest line.  Hildberghausen Infantry skirted the west end of the ridge, to find a reserve line already being prepared.

But behind Hildburghausen, whose advance served to mask developments behind them, A mass assault was  in preparation to force the farm.  Second Artillery was already in action battering the lead battalion of 3rd Brigade.  Heavily protected by cavalry, the Feldjagerkorps were enveloping the Farm from the West flank, drawing ever closer.  Palffy Infantry edged forward in an assault column, ready to decide the issue.

All too soon, Hildberghausen and Baden-Durlach crested the ridge and delivered a blistering short range volley into the Rebel 3rd Brigade.  For their part, the latter's reserved fire did considerable execution among their foes as well. 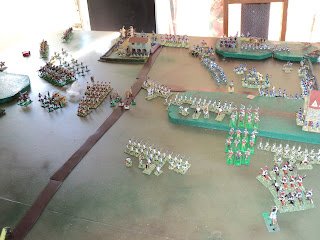 A brief but savage fire fight saw the right and centre battalions of 2nd Brigade break, and make off to the rear.  The larger Imperial units were able better to withstand the punishment, though Hildberghausen, directly under the Rebel guns, found itself unable to advance further.

On the east flank, the Rebel Jager had not only arrested the Pandours' advance through the woods, but had driven them back out again.  This was however, more than balanced by silencing of the Rechburg guns.  So heavy were their looses that the survivors had to abandon have the ordnance as they made of to the rear. 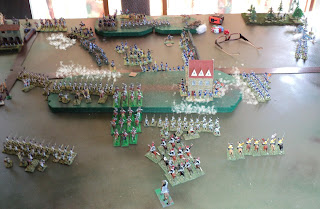 Having edged the Rebels, barring the Chateau garrison, off the Chateau Ridge, and forced the enemy army within a restricted perimeter; the Rechburg guns having been put out of action, the Imperialist stood ready all along the line to begin the decisive assault.  The Archduke felt certain that right now the fate of Ulrichstein lay teetering in the balance...

At this point he game was adjourned.  Neither of us realised it would be three weeks before we could resume and conclude the action.  So far the Rebel Alliance right flank and right-centre had been forced back, and the Rechburg guns put out of action.   But all this had come at a price, Imperial and Electoral losses so far having been the heavier overall.

Posted by Archduke Piccolo at 3:50 AM