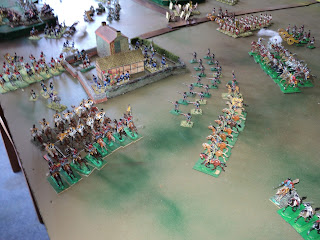 Having carried the western end of the Chateau Ridge, the Archduke tried to maintain a heavy pressure all along the line.  On the left, the farm garrison of 3rd Brigade was brought under heavy fire from Imperialist artillery and Jager closing in to short range.  Heavily protected by nearby cavalry as they were, the Jager had little to fear even in the open from enemy mounted troops, as they decimated 3rd Brigade in the Farm. 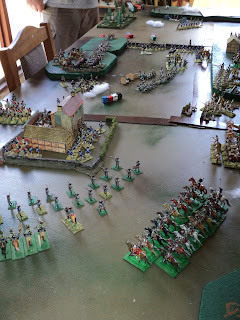 The Herzogtum heavies did burst out from behind the farm but they were met by the squadron of Khevenhuller Dragoons.  In a protracted battle of charge and countercharge, the Klutzenputz Cuirassiers defeated superior numbers and successive squadrons of Imperialist medium and light horse, but were unable to break out into the open country, nor create the space for the Rebel light horse themselves to enter the fight west of the farm.

(Eight Dragoon figures charged in a single line; the Cuirassiers' 12 troopers 2-deep.  As the lighter horse, the dragoons' 2 dice had to roll 3 or less to register hits.  The cuirassiers rolled 3 dice, but being overlapped on both flanks, two of those also had a reduced die range.  In the first round of combat, the dragoons scored 2 casualties and received 2 - luckily an even score.  Both sides surviving the morale roll, they went at it again in the following turn.  This time the Cuirassiers weight and numbers told.  Losing 2 again, they inflicted 4 upon the Dragoons, who promptly fled.  But to their left rear waited the Nadasti Hussars, for their turn to enter the fray...) 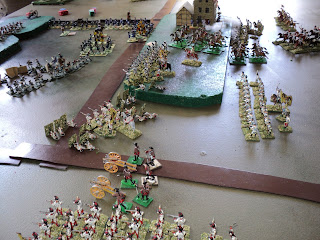 His first line having given way in the centre, Marshal Noailles hastily formed a second on the valley floor between the ridges.  Advancing through their own musket smoke, the Imperialists shattered this new line in moments; Gimmeitor-Oels Infantry lost a good half its numbers to the combined musketry of Baden-Durlach and Hildberghausen Infantry, and piled back to the rear.

At the same time Birkenfeld Cuirassiers surged over the ridgeline and into the rebel 2nd Battalion, which had formed into square betimes.  The result might have been expected: the loss of several of their number was shrugged off by the charging horse (passed morale roll) and  both sides lost very heavily in the subsquent close quarter fight.  The infantry saw off the cavalry, who retired back over the heights, reduced by half.  But the infantry had themselves been sufficiently shaken by the encounter to fall back in disorder to the North Ridge.

The Imperialists were clearly not having everything their own way.  Further, the Rebel guns had exacted some revenge for the defeat of Gimmeitor-Oels Infantry.  The gallant musketeers of Hildberghausen Infantry, having endured a steady and heavy toll to enemy gunfire and reduced in their final exchange of unpleasantries to little more than a third of their original strength, finally broke off the action and fled.

(Note to self: amend morale rules such that any modified Morale Factor less than zero counts as zero.   Hildberghausen rolled a 1 for its final morale roll, but its negative modifiers were such that a break and rout result proved to be inevitable.  Methinks this is a poor reward for the gallantry and stoicism under fire of that particular unit.  A 'Fall back in good order' would have been fairer.) 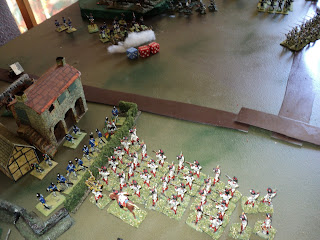 Returning to the Farm area, Graf Tympani, commanding in this sector, deemed the preparations sufficient to throw the Palffy infantry into the fray.  It was a thin line that defended the farm's hedgerows, and the musketry therefrom proved scattered and not very effectual (2 hits only).  To improve their chances, the Marshal ordered his large battery to fire in support of the farm.  Having passed within canister range, the column could expect considerable hurt from the guns - but they all missed!

(All three rolled sixes - a 1-in-216 deal - but under my rule set, as the target at the end of the turn is unavailable {in melee} it counts as a 'crossing target' with a reduction of the Die Range to 5.  Sixes don't count.  Had the column not reached the hedgerow, the 18, plus the 2 from musketry, would have resulted in 20 hits - casualties most likely in the range of 11-13, i.e. over 30%.  With such a loss, the unit would have had about a 50% chance of going through with the attack.) 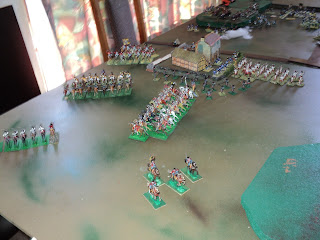 Palffy overran the defenders with ease.  The few survivors abandoned the hedgerow and made off through the farm.  Meanwhile, the Khevenhuller Dragoons having lost their fight, Nadasti Hussars flung themselves upon the disordered Klutzenputz Cavalry.  Disordered as were the heavies, and the numbers very slightly in their favour, the light horse might have been expected to win the fight.  But the Cuirassiers held.  The hussars were not going to find this fight going their way at all. 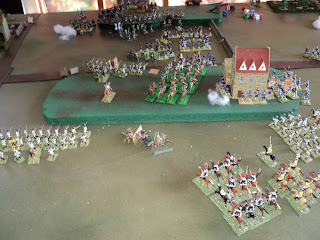 Meanwhile, what of the other flank?  After a prolonged fight, the Rebel jager had driven the Pandour battalion out of the North Woods, or at least so it seemed. 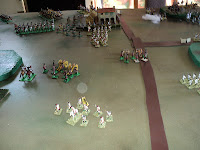 But General Plodt had indeed ordered the evacuation, pulling the Pandours in towards the south where he was shifting the weight of his force.  They were to cover the guns, now limbered up and heading to bring the chateau under gunfire.  In the meantime, he had formed Winterfeldt Infantry into column in an attempt to carry the place by storm. 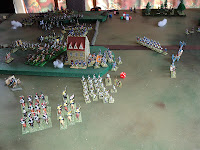 Under cover of this assault, and contingent upon Winterfeldt's success or failure, Arenberg infantry also formed up ready to carry, take or seize the strongpoint.  As it transpired, the Chateau garrison flung back the Electoral infantry with ease, and with heavy loss.  At once Arenberg Infantry surged forward, broke down the doors and stormed into the buildings and yards.  This time the garrison found the fight much tougher, and were on the edge of having to abandon the place or surrender, when at last the Imperialists gave up the fight and fell back down the slope. 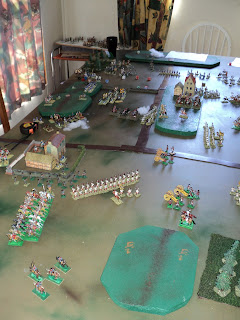 (This was an exciting combat.  The garrison scored 5 hits - very good fighting - but the attackers did even better, considering the odds: 8 hits!  A superb score!  But these have to be translated into casualties.  As it happened, the garrison's 5 hits became 4 casualties - about what you would expect.  The attackers' 8 hits became a paltry 3 casualties!    However, as neither managed to score 50% higher than the other, the combat at this point was 'drawn'.  It might have gone on to a second round next turn, but Arenberg just failed its morale roll.  The result if this was that they had to abandon the fight, but retained sufficient order to continue to present a front to the enemy.  The garrison passed its morale roll, and remained in situ.)

Though none too pleased at the outcome, Archduke Piccolo accepted the result as the risk he had undertaken in order to gain time. 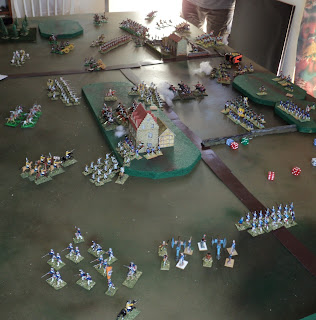 By this time the Electoral guns were beneath the walls of the chateau, and was preparing to blast the garrison out. 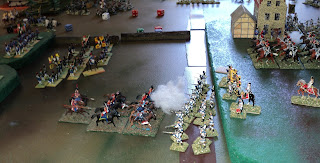 Amid the growing chaos in the centre, Marshal Noailles asked Graf Raunchfester to fling in the Schaggenstein Uhlans to stop the seeming unstoppable advance of the enemy infantry.  Down the slope they went, across the valley floor and through the boiling smoke.  Supporting Imperialist gunfire failed to stop the charge.  Taken by surprise, still in their line, the Imperialists' musketry proved ineffective, whereat the  horsemen rampaged into the hapless foot with lance, sabre and pistol.  As suddenly as they appeared, they vanished through the smoke - their charge a resounding success.

(Actually, I deliberately accepted the change in line, forgetting the effect of smoke in reducing the effect of the defenders' musketry.  I certainly had time to form square, as the light horse had begun their charge more than half their move from their target.  But even then, the foot were unlucky not inflict any hurt at all upon the Uhlans, whilst losing 6 figures of their own.  The result of the morale roll, however, was of a piece with the performance of the Imperialist foot all day.  Far from breaking of in rout, Baden-Durlach maintained their good order as they pulled their line back over the ridge line.)

Finally, the Klutzenputz Cuirassiers had held the hussars for a space (One bound in which they knocked over one hussar for no loss themselves.  As the 50% higher rule does not apply in the 1-nil case, this combat is considered drawn for this bound).  But once again excerted their heavier weight and threw back the Imperialist light horse.  But the Nadasti Hussars had left their mark, right enough.  Reduced to 50%, the Cuirassiers had had enough, and abandoned the field.

Despite the series of successes towards the end of the day, Marshal Noailles could not hide from himself the fact that his army had been fought out.  The Farm, the anchor of his right flank, was lost, and about to be occupied by the Imperialists in strength.  Klutzenputz Cuirassiers had fought itself to a standstill seeing off two enemy units, and were about to quit the field.  The Chateau garrison still held, but in increasing isolation as the Rebel Army fell back in increasing disorder across the valley to the North Ridge.  Baden-Durlach had at last been driven off, but there was Alt-Colloredo Infantry about to take its place.  After its successful storming of the Farm, Palffy Infantry had rallied into line, ready to roll up the Rebel right flank.  The Rebel left flank was almost as much in danger. The Rechburg Artillery had been silenced some time before, and half the battery had had to be abandoned.  To bolster the centre, the line of earthworks had to be abandoned by 1st Brigade when the 2nd had been shattered.   Not much to stop the Elector's Corps, then.

The Marshal gave out his orders: his army was to quit the field.  He had lost over 400 prisoners and abandoned 4 guns, but his army, drawing off in good order, at least remained in being.  That would be a negotiating point of some value, however small.  But there was no disguising it:  the Rebellion was finished.

That evening, as Marshal Noailles sat in his tent sipping the last of his supply of Rhenish wine and contemplated the events of the campaign, he was disturbed by a small commotion immediately outside.  He waited, as a phlegmatic seeming commander would, until the corporal of the guard entered.

'Very well, Corporal,' sighed the Marshal, 'Send him in.  Send for Count Raunchfester too, if you would be so kind.  I wish him to be present.'

To be concluded: the End of the  Ulrichstein Revolt.

Posted by Archduke Piccolo at 5:51 PM