Well, this  part is mostly about squares.  Having discussed in my previous post a means of drawing up a hex-field with squares arranged in a brick pattern - a 'Brix' field, I explored  what I considered to be problematic about such a field - shooting ranges - and looked at a possible solution.  At least one commentator (thanks Ross) brought up a limitation as it concerned units that spanned more than one hex, square or 'Brik'.  That may become a topic for future discussion.

Right now, I'm about to state my personal preference for the standard 'chessboard' square array anyway.

The major problem hinges upon moves, and shooting, though corners.  If diagonal moves are as 'easy' as orthogonal (as they for a King or Queen in chess), you get the peculiar topography of the chessboard in which the corner-to-corner distance is equal - in effect - as that from side-to-side.

What if you permit only orthogonal movement - or, whenever a move of multiple squares is contemplated, effecting diagonal moves by two orthogonal moves - 1 'up' and 1 'across', for example?  The effect of that is almost the same is the problem it seeks to obviate.  The range of squares reached from your starting point still describes a square - a smaller one than if diagonal moves were permitted, and it has been tipped up 45deg upon one corner to form a lozenge shape - but it's still a square.

It is possible to mask this effect, as the game Civilization does, by substituting a chequey field by a lozengy one.  The picture below is an instance of this sort of thing, with the lozenges flattened along the vertical axis.  But it doesn't really resolve the issue.

My approach is to employ a 'movement allowance' system, in which the 'cost' of moving diagonally is 50% greater than moving orthogonally.   This does nothing for movement allowances of just 1 or 2 squares, but for 3 or more, you start to get a 'foorprint' of possible destinations that more closely resembles a circle than the hex system allows.
Here we have it.  Leutnant Gruber's little tank, sitting in the centre of that array of squares can reach squares depending on its movement allowance (MA), indicated by colour and  number.  If its MA is 9, then he can reach any coloured square he likes.  If it happens to be 5 only (say) then he can reach only as far as the orange squares.  Note that I have numbered only along the orthogonals and diagonals from Leutnant Gruber's little tank.

The blue circle shows how close to a circle the MA=7 'footprint' is. The slight penalty for diagonal movement (40% is mathematically much, much the better approximation than 50%, but defeats practicality, methinks) isn't worth troubling about.  In my view it is a great advance upon the chess or orthogonals-only systems.

The main difficulty I see at this point is having to 'count by one-and-halves' for diagonal movement.  The simple way around this is to double the MA numbers, such that between adjacent squares, an orthogonal move costs 2 Movement Points (MP) and a diagonal move costs 3 MP.  Simple: saves fractions, and is easy to remember.  So long as one does remember it.

The question now comes down to multi-element units, orientation and musketry ranges and arcs of fire.  From the point of view of orientation, I think we will have to accept an artificiality imposed upon us by the grid system:  The unit's elements will have to be facing orthogonally or diagonally.   In each case, the elements' firing arcs will be defined - for instance - as in the following diagram, in which the shooters' range is measured in the same terms as movement rates: MP. 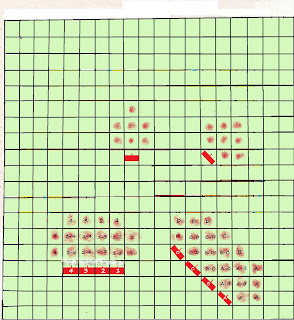 In the diagram, shooting range is 3 in all cases, but with a limit to how far to a flank.  Here, I use the convention of imagining an adjacent element with the same facing.  The arc of fire extends to the flank only to a square directly to the front of that adjacent element.  That will mean a single element facing diagonally will cover one extra square, but I think we might be in swings and roundabouts country here.

Consider two 4-element units - They might be a 4-company Napoleonic Battalions - in a fire fight.  Let their effective musketry range be 3(MP).  See how the unit's effectiveness falls away to a flank and beyond 2/3 maximum range to the front.

The unit facing diagonally necessarily covers more front (40% more, geometrically speaking; 50% more in terms of our MP system).  As such, you will observe that it covers more squares: 20 to the orthogonally placed unit's 16.  If you count the coverage of each square, the right-hand unit scores 32 (4x8) on 20 squares; the left-hand unit 28 (4x7) on 16 squares.  The former has the wider coverage (32 to 28), the latter is slightly denser (1.75 per square vs 1.6).  Swings and roundabouts.  So far, I see no way around this. 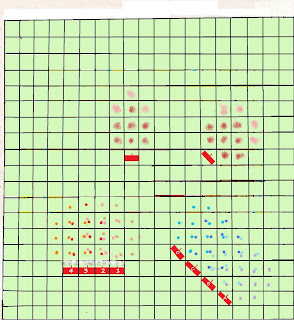 For the sake of illustrating any amendments you might care to make, I have added for this diagram 1 MP to the shooting range of our elements.  At this point I'll do no more than observe again that the apparent advantage in ground coverage of the diagonal placing is partially offset by the greater density offered by the orthogonal placing (though there the difference is very small).  This can be fudged either way.  You might decide, for instance, that if a unit can bring any fire to bear upon an enemy, then the whole unit can have a go.

At any rate, I leave this with you for what it is worth.  For mine, I'm quite intrigued by the effects of range and arc of fire in concentrating the greater fire effectiveness towards the centre-front.  Now, if I could just think of a way to bring that effect into 'free' table gaming, without adding too much in the way of tedium...
Posted by Archduke Piccolo at 8:57 PM