To further the development of the was between the rival nations: the Kingdom of Ruberia and the Republic of Azuria, Brian (A Fist Full of Plastic) donated a whole bunch of figures and accessories from the 'War: Age of Imperialism' boxed set.  What to do with the navies?  Well, the Red and the Blue were simple enough, but what of the Grey and the Purple?   It seems that the Grauheim and Porphyrian Empires might have to come into at least a shadowy existence as allies of one or the other.

At that, some way of adjudication naval actions was called for.  So: simple naval rules, designed for one brain cell or fewer.  As there is just the one ship type, I'll stay with that.

1. Movement: 10cm, maximum.  All moves are simultaneous.
2. Maximum turn 90 degrees, only one such turn per move.
3. Squadrons move as a body.  If in line astern, the successive vessels turn at the same point as the first.
4. Gunnery Range: 30cm maximum, 6's required to hit.
5. Each ship gets 2 shots, one for each turret fore and aft.  Secondary armament?  What secondary armament?
6. All fire is counted as simultaneous.
7. Vessels may not fire over friendly vessels.
8. Targets within 45 degrees of a central fore-and-aft line through the  vessel may be engaged only by the fore or after turret, as appropriate.  Outside those angles, the target may be engaged by the full broadside of both guns.
9. For each hit received, a vessel loses one gun. Having lost both turrets (2 hits) the vessel is considered to have been sunk.  However, I am thinking of changing this such that although the guns are out of action, a 3rd hit is required to put the vessel down. I'm also thinking that a hit has to be registered before any damage is done.  Not sure about that one.
10. Actions are fought until one side is completely sunk, or else has successfully broken off the action.

Here is a description of an action fought between a small Ruberian squadron against a Porphyrian fleet, from the Log of Admiral Sergei Sergeivitch Nuttoffsky, aboard his flagship Tsarina.

17th October, 1871: 1600 hrs
Steaming through the Straits of Dyre in line astern, course SSW; visibility fair, slight wind from the East. Sighted Ruberian Squadron of 3 vessels steaming W or W by S at the head of the Straits.  Almost at once enemy vessels fired their first salvos at our lead vessel, Taras Bulba.  Confined as we were, no manoeuvring was possible as the Ruberians crossed our 'T' firing six times the volume of fire able to be put down by Taras Bulba (i.e. 6 shots to 1).


Fortunately, the enemy took several salvos to get our range.

Adm Nuttoffsky ordered a change of course to West by South, still in line astern, to parallel to the enemy line.

It was not until half way through the change of course that the enemy registered a hit upon the second vessel Elizaveta Romanova.  However, our own gunnery proved much the superior, as the lead Ruberian vessel, HMS Obdurate took the whole salvo from Taras Bulba and went down. The Flagship of Commodore Aloysius Slybacon, HMS Obsidian.  also received a damaging hit, and a turret put out of action.
Shortly after these successes, however, Elizaveta Romanova was also sunk by a hit from Obsidian. 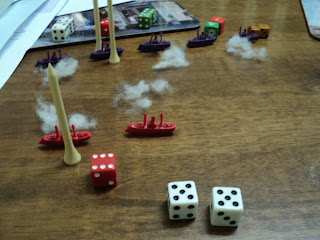 In the ensuing exchanges, Admiral Nuttoffsky's flagship Medvjed remained unscathed, but the rearmost Ruberian vessel scored a hit upon Sukin Syn.   As the weather began to deteriorate, with thick stormclouds coming up from the west as afternoon faded into evening, both sides were finding hits hard to achieve (I thought I was going to run out of table).
Just as it appeared that action would be broken off, Taras Bulba's final salvo sent HMS Obsidian to the bottom, and Sukin Syn avenged herself with a telling blow upon HMS Obnoxious.  As night drew in, Obnoxious managed to crawl off without further damage. The Porphyrian fleet continued westwards in search of a sea port in order to effect repairs on Sukin Syn.


This was, of course, an undoubted success by the Porphyrian fleet against a redoubtable foe.  For the cost of one ship sunk and another damaged, the Porphyrians had fought out of what amounted to an ambush, whilst sinking two and sending the surviving enemy ship limping off heavily damaged.  But it was, of course, just another instance of God fighting on the side of the big battalions...

For a one brain cell rule set, it seemed to work OK...


Posted by Archduke Piccolo at 2:53 AM