This is somewhat inspired by Rob Cordery's recent blog posting concerning the use or adaptation of his MOMBAT (Memoir of Modern Battle) rule set.  This was in the context of a correspondent's Green and Tan Army Men project.  It seemed to me that it might go with my Jono's World thing as well, though that is 'set' in a period cognate to 1941.

But I was reminded of a turn of the Century - the 19th - in which I thought to rip off (technicians imitate; artists steal) what I could figure out from the combat system Rob was using.  Before going into this, I think it is worthwhile looking at the figures I'm using.  A considerable time ago I posted an account of the 'First Marnon War'.  This was the early stages of this idea, which has since then received some refinement.

The figures are from the Eagle Games's 'War: Age of Imperialism.'   These comprise (inter alia) Red (Ruberia) and Blue (Azuria) forces, each with 15 foot figures, 6 carbine-armed horse, 5 sword-armed horse, and 5 guns.  There are also some 'explorer' figures with a staff or walking stick, and engineer/surveyor types with theodolites. From these I make my armies.

I mentioned to Rob Cordery that each figure represented a Division, but Brigade would be a reasonable alternative.  On the other hand, one might organize things differently, adding, say a IVth Army Corps by diluting the other III.  I did think to add a Corps Command, but what I had in mind has been diverted into something else.  The  figures with surveying equipment might end up as engineers (military or civil).
The 'explorer' guys with the stick become gunners with trail spikes or rammers.

This leaves 1 gun spare, which might be used in garrison, or as a reserve piece (replacement or Army Reserve Artillery park).

It would be tempting, I think, to detach some troops from the army Corps, 1 infantry to serve as garrisons, say, and 1 Horse to serve in reconnaissance or raiding roles.

Combat strengths:
In what follows, I thought to provide any force - which might comprise anything upwards of one figure, but no more than an Army Corps.
1 die per horse figure;
2 dice per infantry figure;
3 dice per artillery piece;
1 die per engineer figure (if included);
2 or more extra dice depending on terrain and stance. 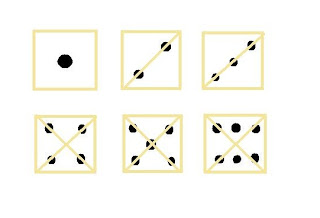 It will require two strikes of exactly the same pip value to force 1 unit to retreat; three such strikes to eliminate it. A roll of 4-5-6 will cause no damage to infantry, even though all three are 'strikes'.  You need actual doubles for retreats, and triples for 'kills'.

Example Combat:
In the brief Wombat Furriers' War of February 1890, the opening clash occurred on the 3rd, as the advance guards of both armies approached the border town of Bilkington.  Crossing the frontier the day before, the Azurian Cavalry Corps approached the town from the east.  Hurrying from the Ruberian interior, the Ruberian I Army Corps advanced in the opposite direction. 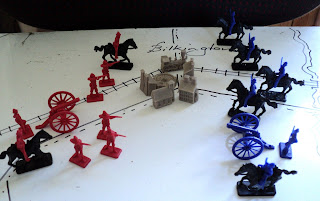 Though the shooting is reciprocated simultaneously, for the sake of simplicity, they will be adjudicated sequentially here.  Note that there are no actual battle tactics or anything so sophisticated. 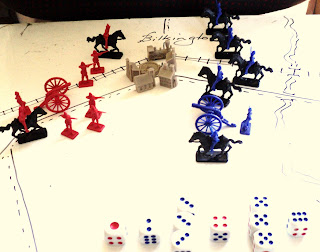 Above is the result of Azurian shooting: 1 die per horse, 3 for the gun, plus two extra for the force.  The two extra is designed to allow a single unit some chance of inflicting a hurt.  From the above convention we can see that the Azurian shooting has been pretty deadly, eliminating a horse (triple 3) and a foot unit (triple 5). 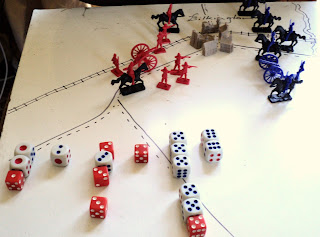 And to the right is the result of the Ruberian return fire.  Had their target been an Army Corps, it would have met with heavy losses indeed, but as the Cavalry Corps has no infantry the Fives and Sixes can be ignored (otherwise the two lots of triple-5s would 'kill' two infantry units, the double-6 forced a third {or an engineer} to retreat).   That being said, the Cav Corps has taken a heavy knock: a horse unit, and, even worse, the artillery, being eliminated. [As there is an extra 3 it seems reasonable to suggest that RED might opt to retire two of the BLUE units, rather than take the kill.  Or maybe BLUE should have the option...].
Such a blow to its firepower, reduced from 10 to 6 (compared with 14 remaining from the Ruberian firepower of 17) should compel the Azurians to retreat betimes, their attempted seizure of Bilkington having failed.

At this point, no doubt the Ruberians would shove a garrison into the town (1 unit), and follow up the retiring Bluejackets... perchance to meet an Azurian Army Corps coming the other way...

Acknowledgements:
My thanks to 'Bill', 'Grigork', 'ian_willey' and Brian Carrick - the latest additions to the list of followers of this Blogspot.  That brings the list up to 91...

Posted by Archduke Piccolo at 6:23 PM