Recently I acquired, among a whole swodge of interesting additions to my WW2 and Moderns projects (heaps of stuff I'll be working on for quite a while, I reckon!), were a couple of small anti-tank weapons that have occasioned me some perplexity and puzzlement.  Right here, I offer my thanks to everyone who has attempted to resolve the mystery for me.

When I first saw examples of these, and observing the superficial similarity to the larger 7.5cm PaK40, I supposed they were 5cm PaK38s, if perhaps on the small side.  As such I was pleased to have them.


But then I found that they were not very similar to PaK38s at all.  The examples I had ended up as the basis for Soviet 45L46 antitank guns instead.

Thinking about this in more recent times, I wondered if they might be one of those tapered bore weapons.  The 28mm Solothurn I could rule out.  Those first generation Airfix fellows were reasonable examples of those, as the following pictures indicate.


Finally I seemed to recall the existence of tapered bore gun slightly larger than the 28mm sPzB: the tapered bore 42mm PaK41.  This was not to be confused with a 7.5cm weapon also designated PaK41.  Online researches into the appearance of this weapon were pretty inconclusive, but came up with this, from the 'Historywarsweapons' site:

The image footing the brief article I have some doubts about, but even so, I will take it as my 'authority'.  My newly acquired mystery guns will enter service with the Wehrmacht - or the Army of Orotina as the case may be - as 4.2mm tapered bore PaK41 anti-tank guns.  The barrel on the model, including the breech, is just on 30mm, which, at 1:76 scale, comes to between 2.28m and 2.29m: very close to the the 2.25m barrel length specification.  That will do me! 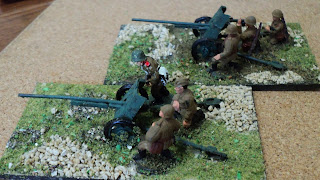 Finally, just to close this posting, here is a pair of Soviet 45mm L66 anti-tank I bought second hand with a whole bunch of other stuff some years ago.  All I did was touch up the guns and reflock the bases (I tend to a fairly minimalist approach to this).  It has to be admitted that in Command Decision terms, the huge bases could be a problem!

Posted by Archduke Piccolo at 2:54 PM