Leopard in the Wild

Possibly the 'centre piece' of the recent trove of stuff received from Brian and Glenn was a German Leopard I MBT, pretty much painted up and ready to go.  Brian suggested I give the ink treatment, but I thought before that, I'd do the brown a much paler shade of tan-yellow, and outline the green with a different (darker) green.  The pic below shows the Leopard after those two tasks were done. 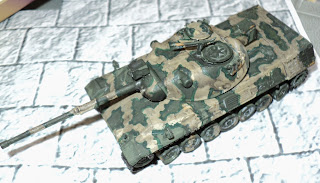 But the think needed something more. I thought.  First an identifying number.  As I have decided my Imagi-Nation of Tchagai is Urdu-speaking, it seemed to me numerals along those lines were called for.  The numbers will be pretty much randomly selected, rather than some serial system.  This tank is #248.
The tracks came next.  So far unpainted, I thought a red 'rust' treatment, yellowish dust/dried mud dry-brushed overall, and then a slosh of Nuln Oil overall would be the caper. 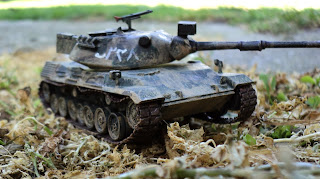 The tracks were very loose as well, and one threatening to break.   So first I glued them to the bottom of the road wheels, and attempted to 'drape' them between the sprockets and return wheels.  The process was a very qualified success, only barely solving the looseness problem.  The draping came out sort of OK, but no better than that. 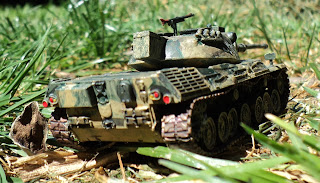 A little touch up with the rear lights - not very accurate in close up, but looks OK from a distance.
And then weathering.  In the pictures, the weathering (dry-brushed desert yellow) looks a bit heavier than it does at a normal viewing distance.  But I reckon I might go a bit easier on subsequent vehicles. 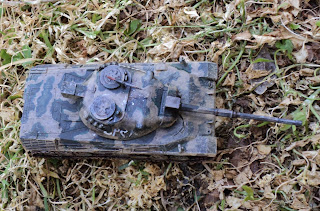 In an earlier trove was this ROCO Chieftain.  Being smaller in scale, I thought it could represent a kind of 'Chieftain Junior' - perhaps a Mark of Vickers Main Battle Tank built for the international market.  It doesn't look quite like any of the actual marks exported, but not so very different, neither.  I thought of calling it a  Vickers MBT Mk 5.   (A.k.a. Susan.  Nah, I'm kidding).

Having looked once more at the paint work, I have decided I will make only minor modifications.  Most of the decals, roman characters and arabic numerals will go.  But that floral motif, seen on the off-side front mudguard, looks so good, I will keep it.   So far, then, I have done only the ink (Nuln Oil) outlining. 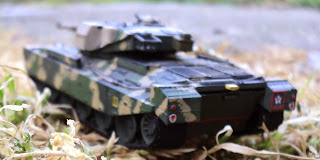 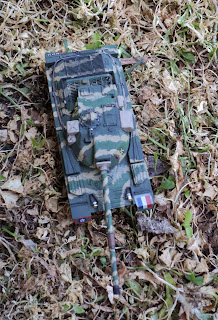 That treatment picks out the top detail quite nicely...

Acknowledgement:
Welcome to Chuck - from The Land of Chuck - Follower #96;and robbie3rodiss, follower #97.  Check out 18th Century Studios ...
Posted by Archduke Piccolo at 3:42 PM