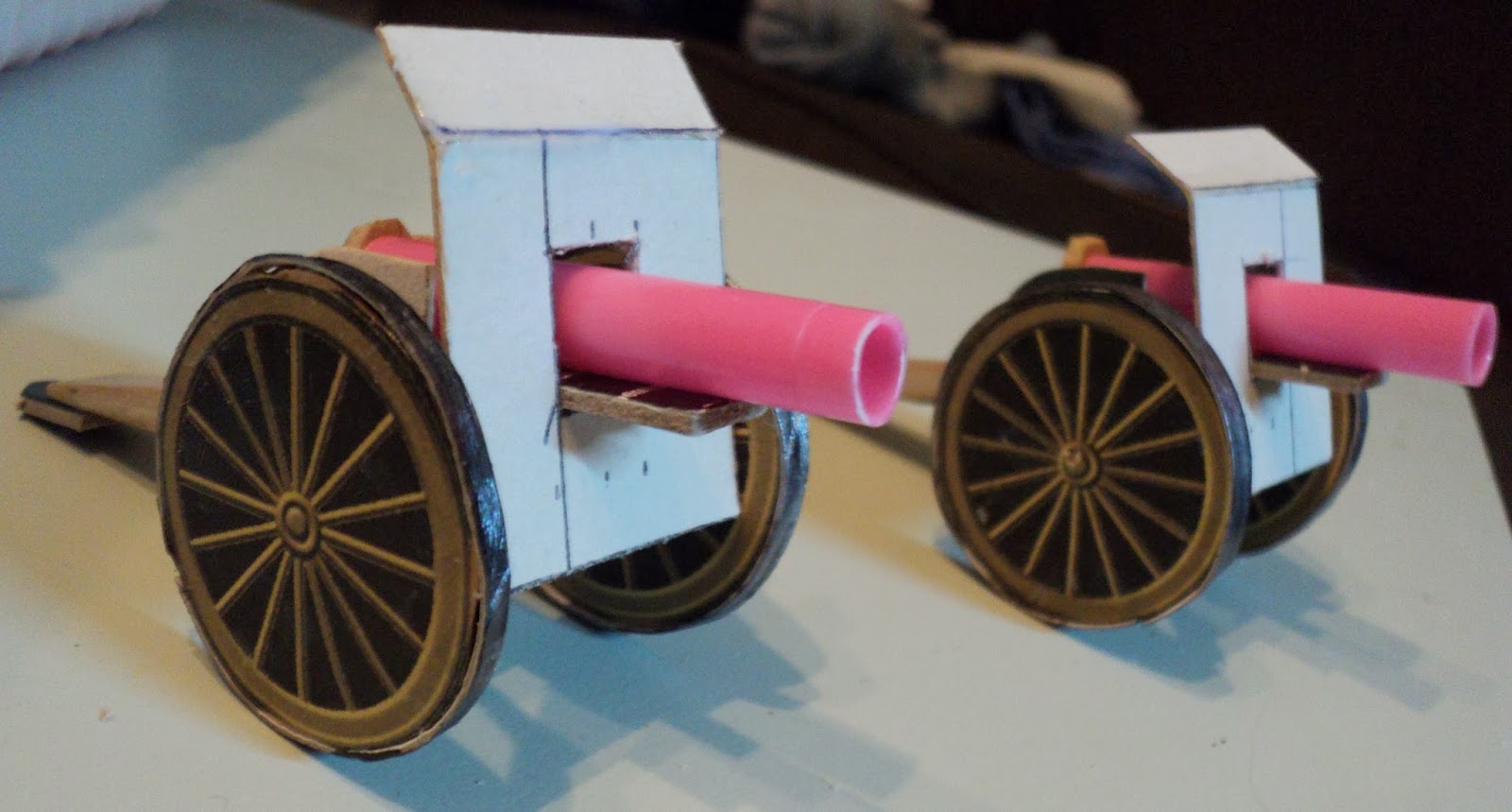 ... Well - cardboard, paper, wood and plastic tubing!  Here is a battery of Kiivar Field Artillery under construction.  Plastic felt pen (exhausted) for the gun barrels, cardboard shield and other bits, half a spring-loaded wooden clothes peg for the trail.  The axle is a short length of balsa.  I would have preferred the guns to have been half a centimetre broader overall, but the length of axle was all I had. 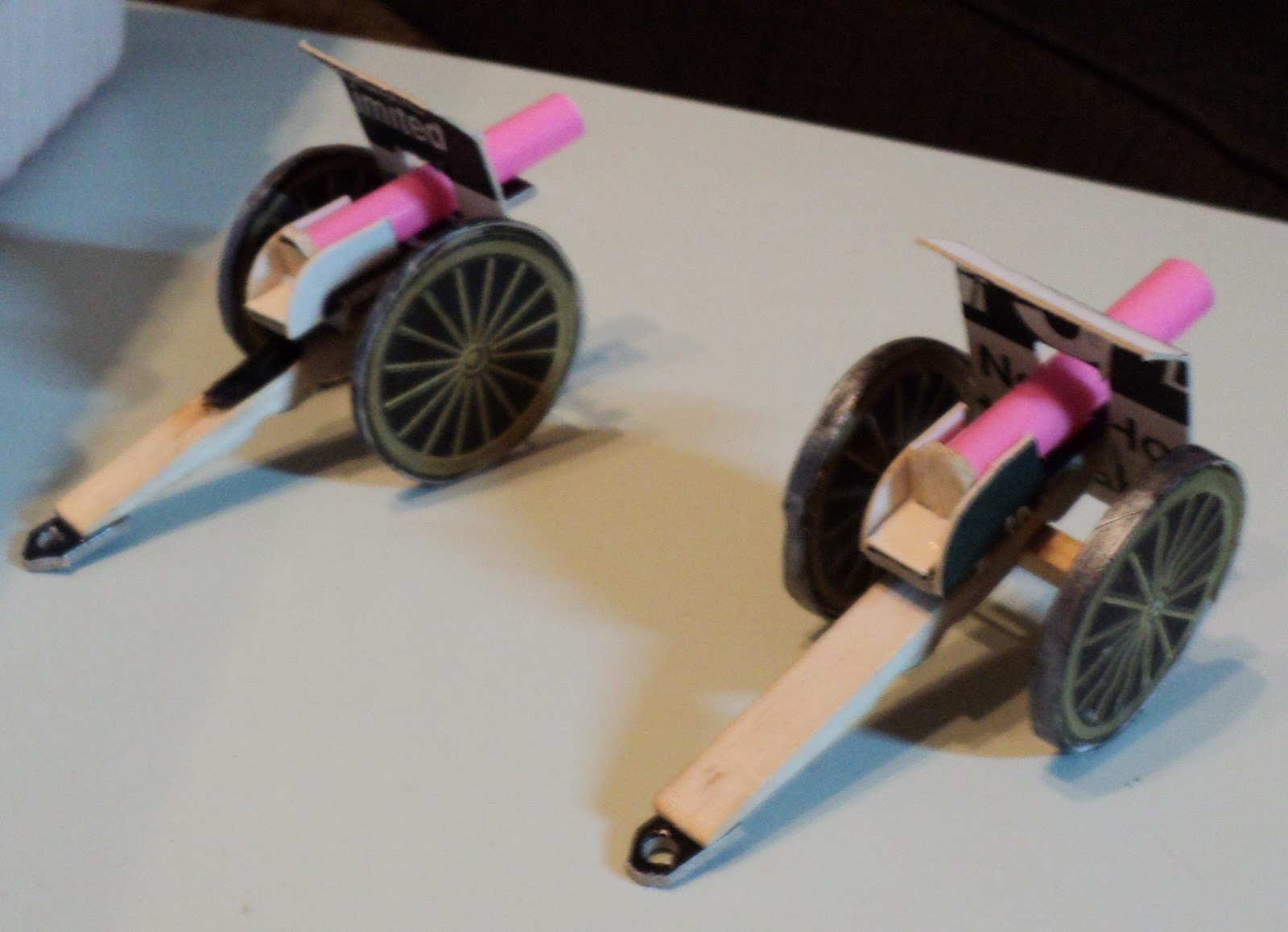 The wheels are downloaded images of wagon wheels glued onto carton cardboard (the type in which the corrugations are sandwiched between two flat bits). A row of four image squares were glued in a whole rectangular strip upon carton cardboard, separated into individual squares, then cut into circles. The reverse then had further image squares glued on, these being in turn cut out into the circular shape according.. 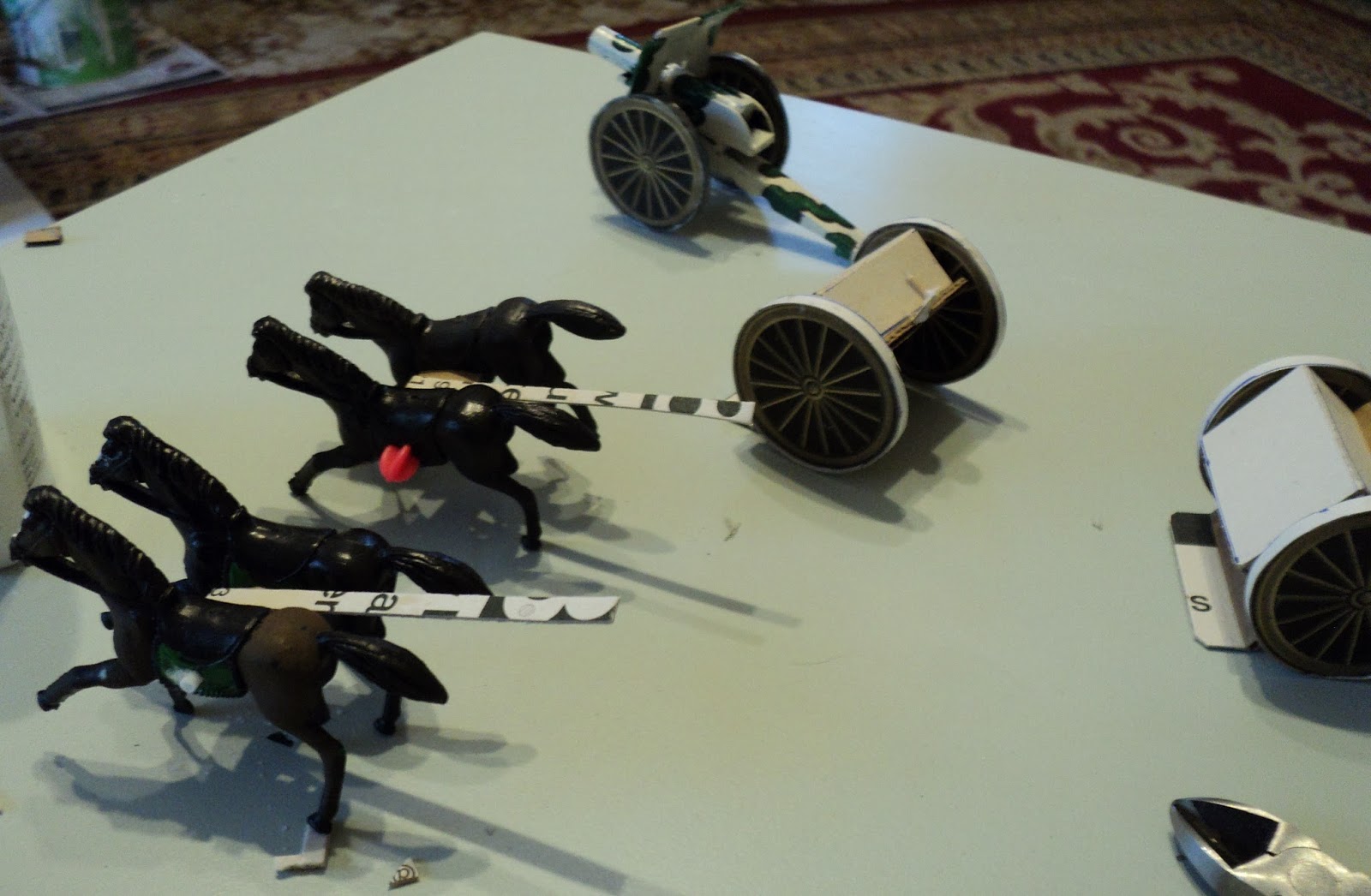 The inner carton board not presenting a good look, cardboard tyres were added.  These were cut from the cardboard inner of a dunny roll.  Somewhat serendipitously, the circumference was so close to that of the wheels (this was just luck, really) that almost no trimming was required, nor (except once) was a gap left to fill.  Even that was hardly worth troubling with. 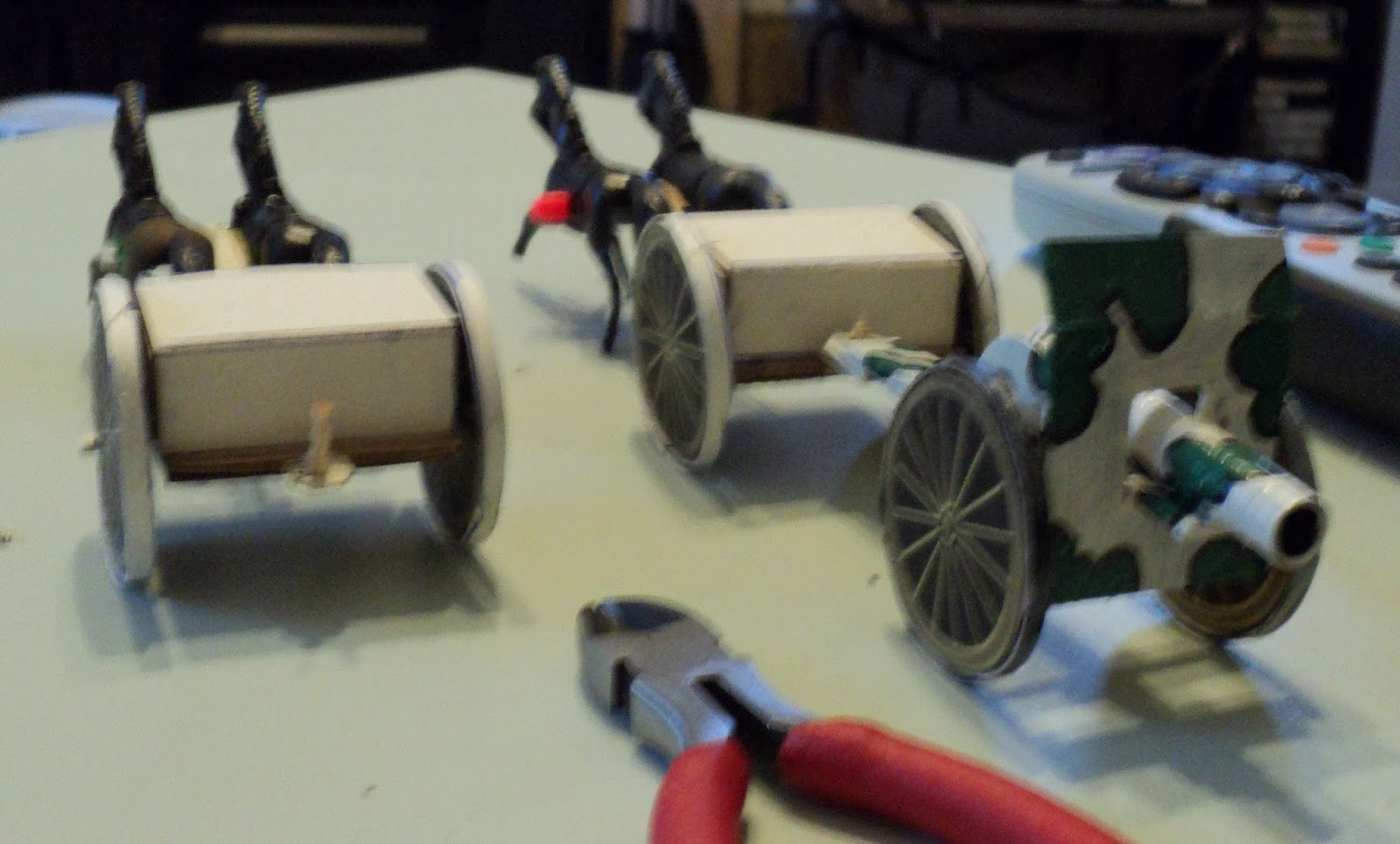 The limbers were simple box shapes made from cardboard, clued onto a carton cardboard base. The beauty of this material was that I could thrust a toothpick axle through one of the corrugation gaps without having to fiddle around gluing it to anything. The front and rear offered convenient gaps to fit foot boards(?) and tow 'bar'. 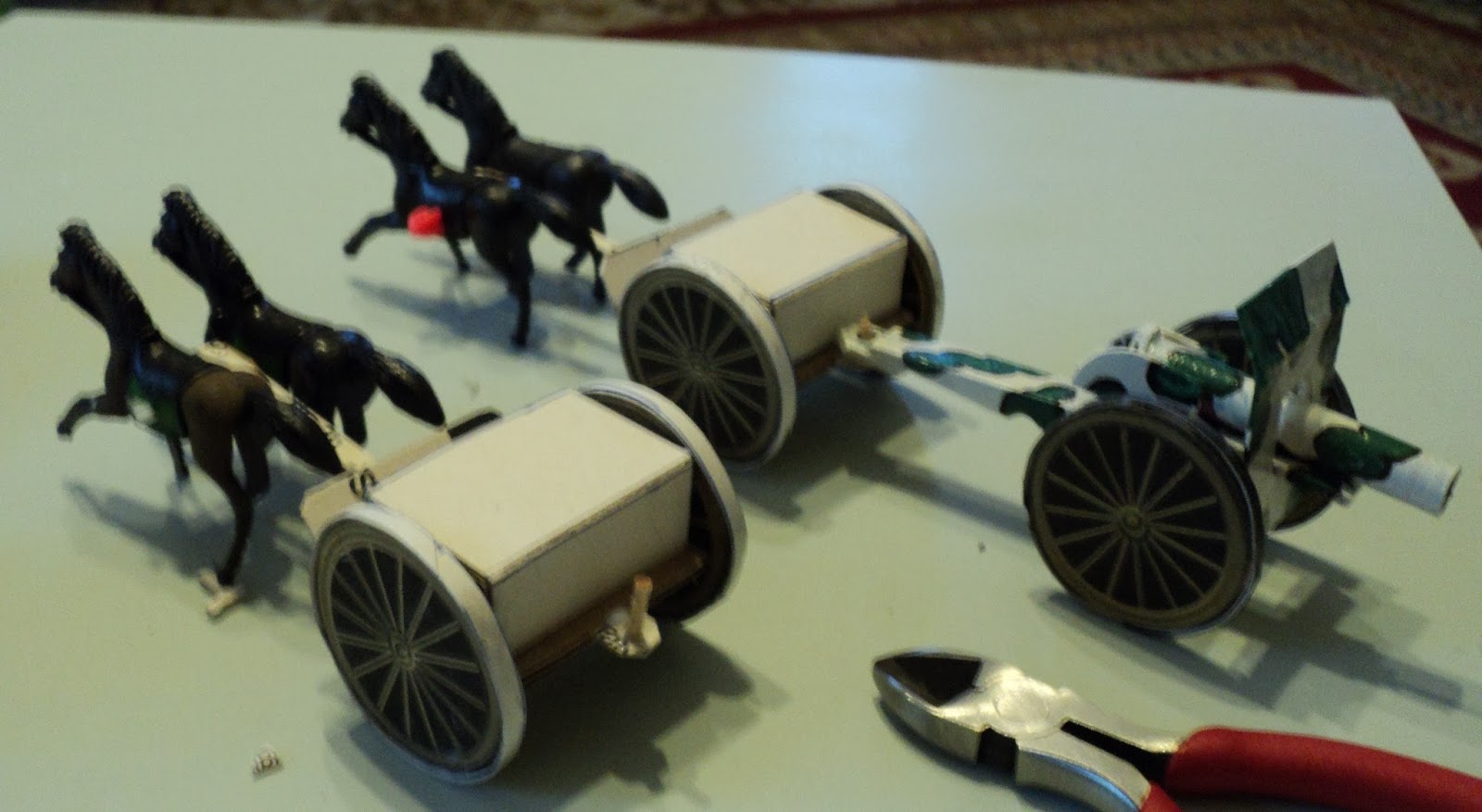 I found it best to pierce the wheel - at least the inner side - to accept the toothpick axle.  My first effort omitted that and simply glued the axle (PVA) to the centre of the wheel.  The resulting wobbliness can not be corrected.
The finished artillery battery complete with limbers and draught teams.  The horses - horrible figures these - came from a bunch of cowboy and indian figures.  Had the horses been capable of standing alone (leaving aside carrying a rider) they might well have been kept to their original purpose.  Lacking that stability they are become paired draught teams for artillery and carts or wagons. 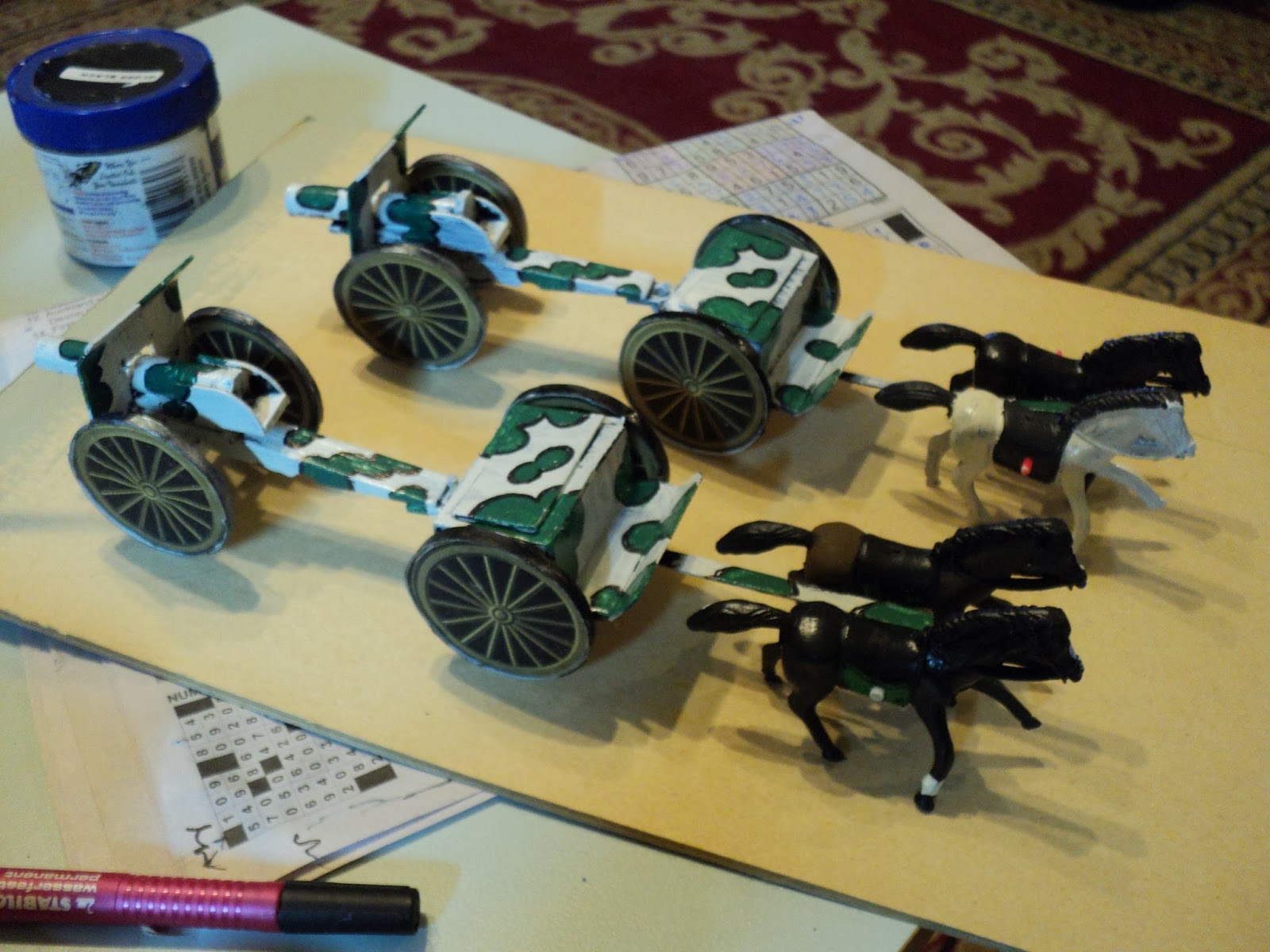 The method of draughting the horses was to thrust through the holes meant for the riders a piece of plastic rod or tube (toothpick would have been as good), except that in between the horses is placed a small piece of carton cardboard with the connecting rod run through it.  This has two functions.  It keeps the horses apart (slightly less than a centimetre) but also gives you a reasonably sized surface to which you can glue the 'tongue' of the limber. 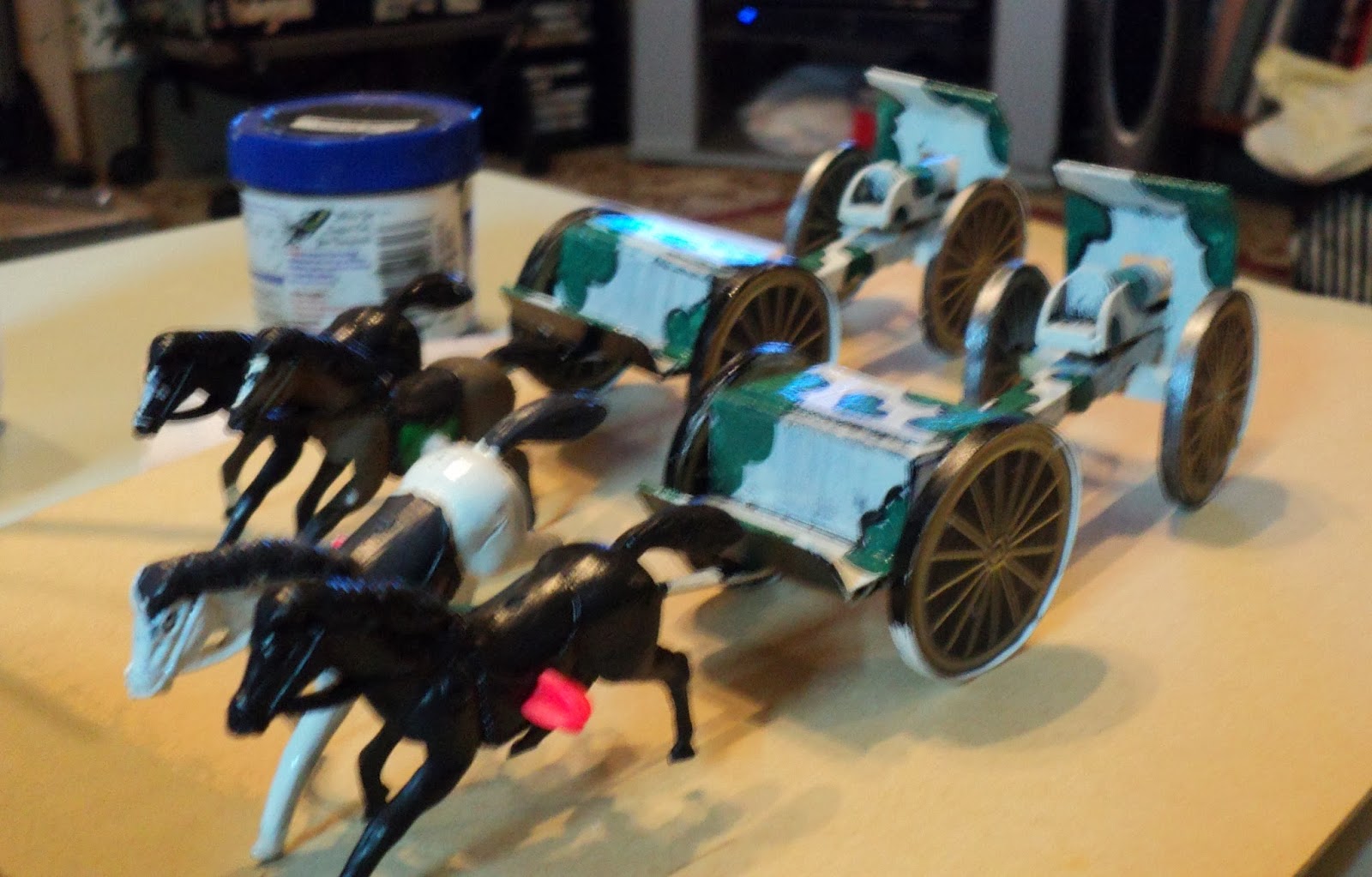 The result looks very successful.  I've added a few more pics of this artillery, mainly because I am quite pleased with them..  The last of these shows my artillery grid, my own invention. 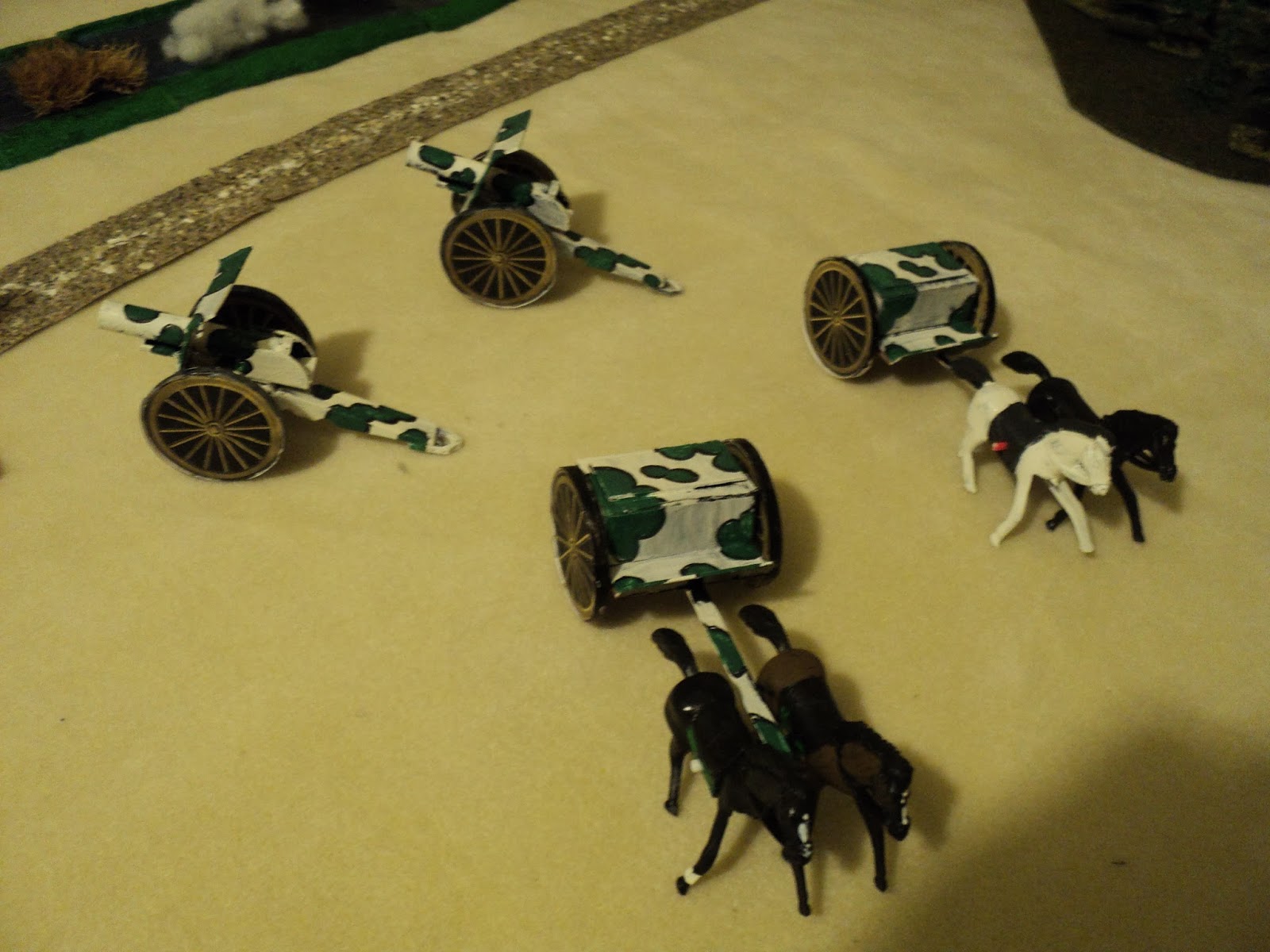 Below is a pic of my artillery grid, drawn on a piece of clear plastic (the type used for overhead projector transparencies).  Its function is to determine the fall of shot relative to the point of aim, but also serves to define the beaten zone of an artillery stonk.  Gunfire is by battery, which may vary in size from 1 gun to 3 (maximum)  for my Army Men rule set.  This particular grid is for direct fire, in which the fall of shot can be observed from the gun line.  The grid is laid over the point of aim (POA), with the arrow along the line of fire.
Two dice (Red/Blue, say) are thrown to determine deviation.  The POA is moved according to the result indicated (e.g. a roll of Red 6/Blue 2 would result in an 'Over' 5 cm, and 'Left' 10cm.
A gun firing high explosive (HE) at 'anti-tank' range will be a bit more accurate than at longer ranges. Therefore the fall of shot is determined by rolling 'Average Dice' (D5s) which effectively eliminates deviations outside the dotted orange perimeter.  This 'short range' effect is is available only to guns and gun/howitzers. It is not available to mortars, and the Jury is still out on whether it will be allowed to howitzers.  Grenades? I consider grenades as close assault weapons and their effect is to be subsumed within close assault mechanics.
Having determined the fall of shot, everything under the plastic grid - the beaten zone - is at hazard. The effect depends on type of target, and how well protected it is.  If the target is entrenched, it will obtain protection from entrenchments unless an 'On Target' result - i.e. a direct hit - was obtained in the 'fall of shot' roll.  A target in a bunker with overhead protection loses some, but not all, such protection in the event of a direct hit.  I am aware that this makes such protections somewhat less effective than in 'real life', but it is worth mentioning that relative to the figure scale, the 'beaten zone' is quite small - just 6 inches square.  Infantry in the open won't be happy to come under artillery fire, but with reasonable dispersion may find only two or three figures at hazard.  Mind you, multiple guns make survival much more problematic.

Posted by Archduke Piccolo at 3:50 PM