Before I begin the substance of this posting (which has been lying in draft for well over three weeks now), I need to make good on my acknowledging the 101st and 102nd followers of this blog.  I feel that I owe them at least to check out what they are doing with their blogs (if they have one) and provide back links where appropriate.
#101:  The Lord of Excess.  D&D and Fantasy Role Playing Games.  Check it out.
#102: Corporal Trim. Castles of Tin.  Collecting wargames figures - flats and rounds.
Wars of Louis XIV.  1648-1715.

Attack upon a strong point.

In parallel, as it were, with a simple play test of Pike & Shotte several weeks ago, I conducted a small play test of my own, much more old schoolish, American Civil War rule set.  The set-up is exactly similar:  A Brigade of two Federal infantry regiments, each of 27 figures, has been ordered to seize, take or carry a Confederate earthwork, as pictured.  The garrison comprises a single regiment, by an amazing coincidence, also of 27 figures. 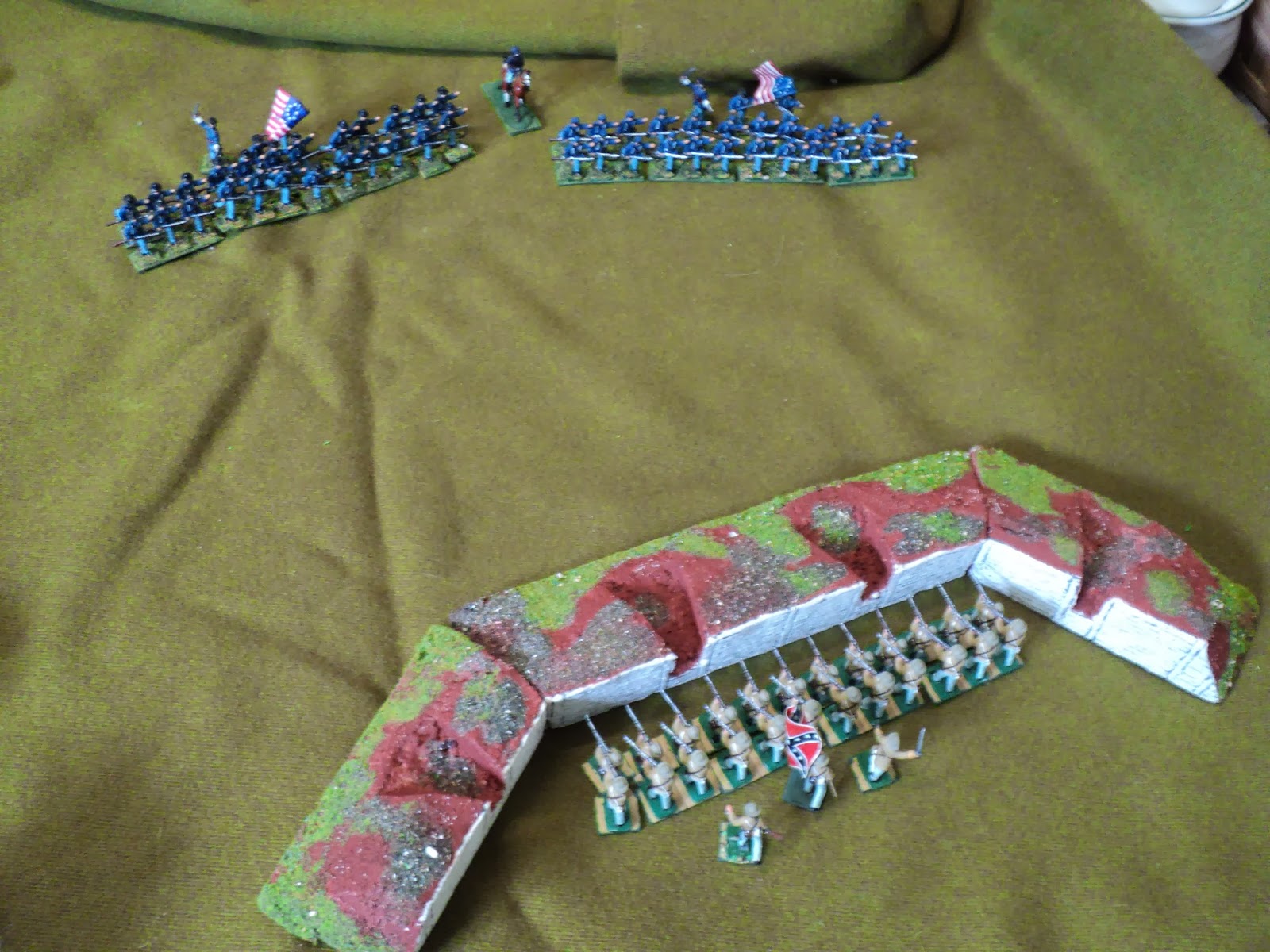 Before continuing, I should perhaps explain why a rule set that I began developing some 30 years ago, and which has received few modifications since, should be the subject of what is really an elementary play test. Near on four years ago I posted a 're-fight' of the Don Featherstone ACW classic 'Action in the Plattville Valley'.  That particular action did not redound to the credit of the Confederate Army, simply because in the early stages I gave the Confederates 4 volley groups per unit instead of 6.  When I did remember, the point at which the Confederates were well positioned to give more than they received had passed.  The  fairly heavy defeat was not the fault of the rule set as such but my imperfect memory of them.  At any rate, the rule set has seen a fair bit of use, though not so much in recent years. 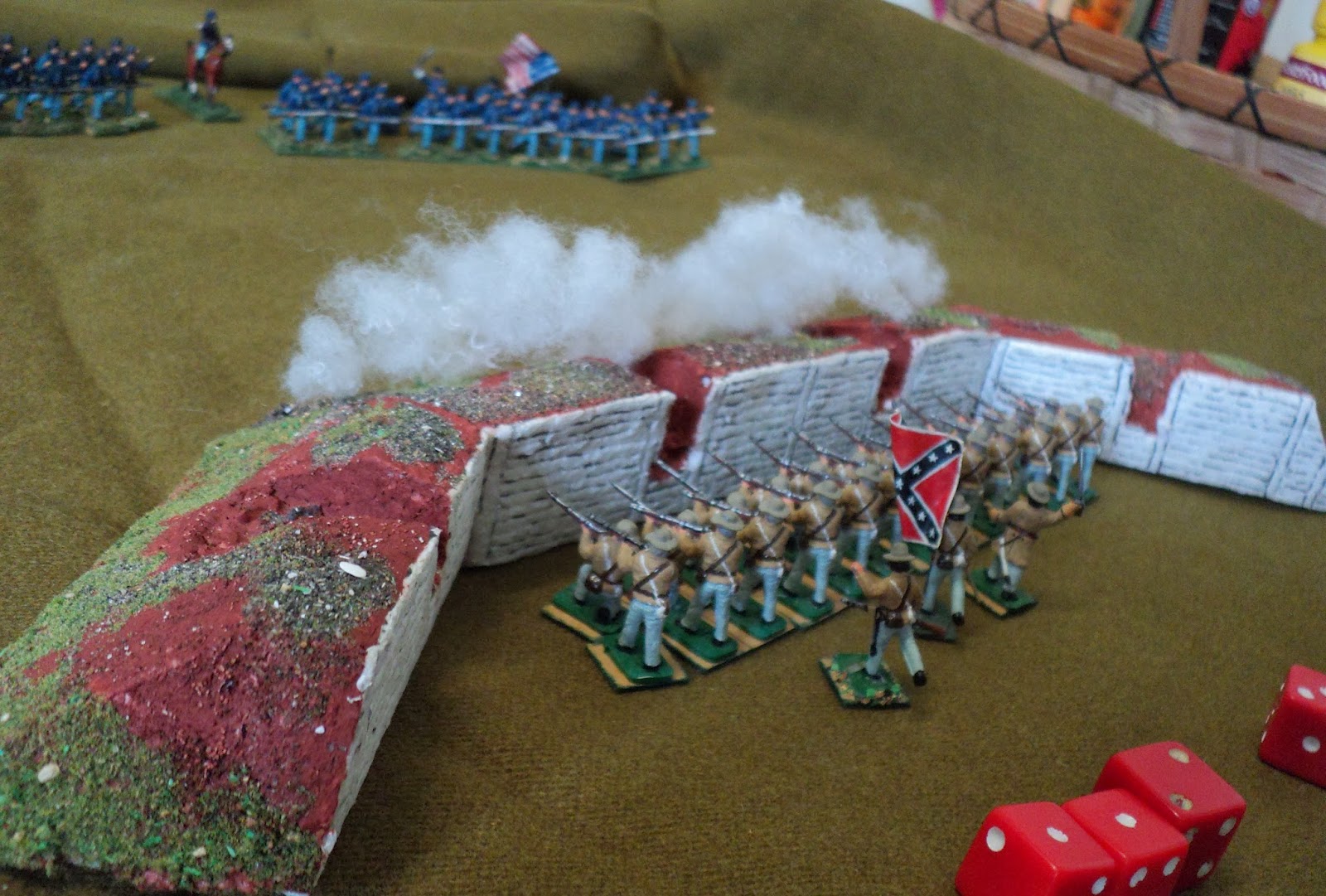 So to the cameo action.  It was pointed out to me, when I discussed this with a friend, that to carry a position like this, three to one odds was considered by military writers to be essential for success.  Already one sees how established wisdom or knowledge can be subject to interpretation.  Does the 3-to-1 mean the minimum to guarantee success? Or is it just the 50-50 point - that is to say, the physical ratio to ensure an even chance of carrying the position? 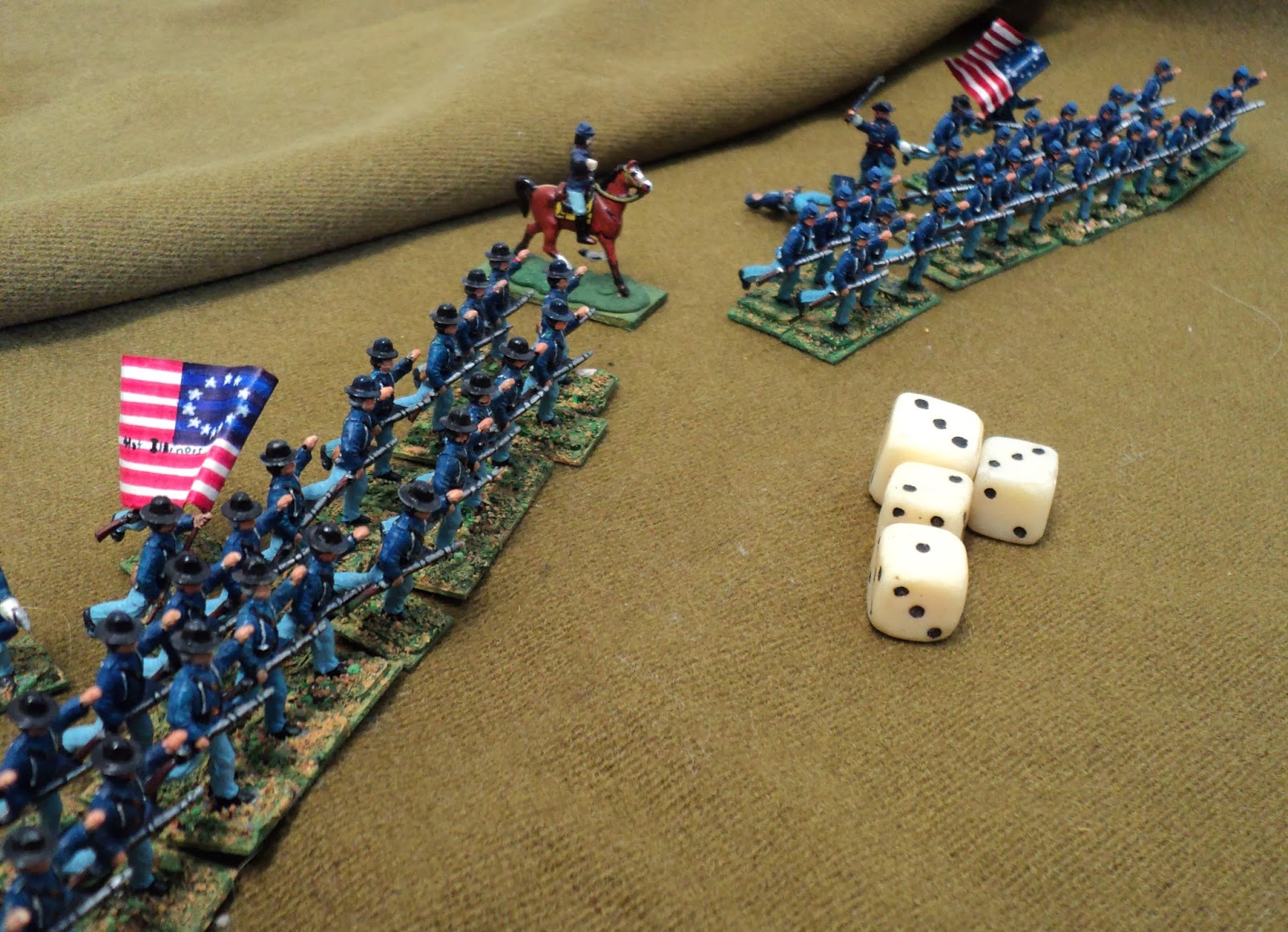 Bear in mind, this was to involve  no sophisticated procedures by which the position might be rendered untenable by the garrison - no outflanking manoeuvres, no artillery preparation, no call upon the garrison to 'shift from the shoulders of the Union commander the responsibility for further effusion of blood.' 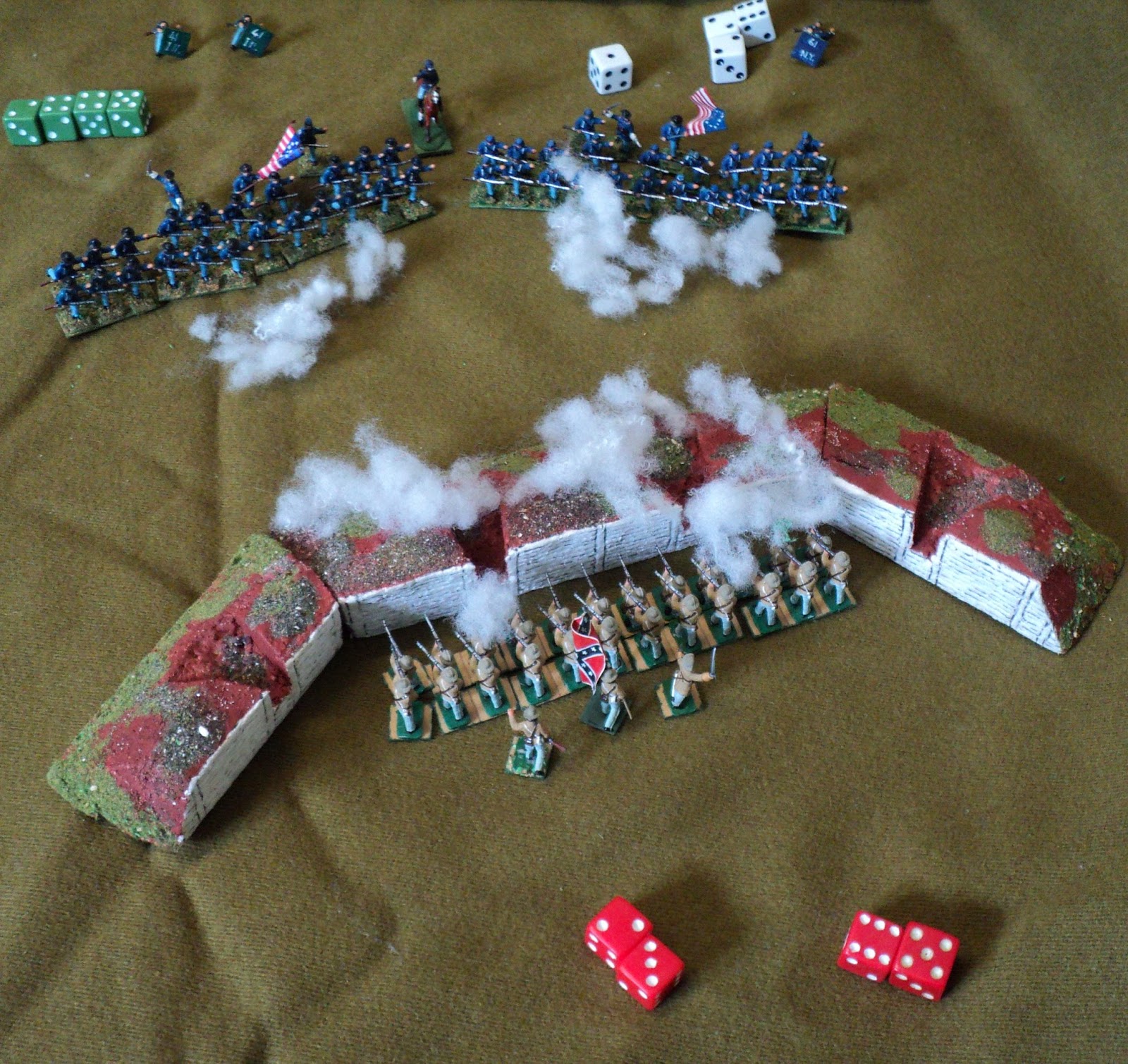 I take the view that the three-to-one ratio is regarded as the minimum by which one can be reasonably confident of success - which by no means implies certainty.  So why have the Union been provided here with just the two regiments?  There may indeed be any number of reasons.  At any rate, with these odds, I reckoned the Union had perhaps a 50-50 chance of taking out the position (this being only moderately strong - the works could have represented a very strong position indeed, in which case a third attacking unit might very well have been required).  It is my view that a commander would be inclined to accept even odds only if he were in a hurry (there could be any number of reasons for that), or otherwise felt that what might be gained from success outweighed the costs of failure (and there are all sorts of situations one can imagine could lead to a decision on those grounds).   You can see from this kind of thing what a moral responsibility rests (or ought to rest) upon a military commander (or anyone in a position of authority, whence comes to that). My rather old-fashioned system of ranged combat uses the Die Range idea pioneered (I think) in the Wizard's Quest board game.  It is simply the system used by Charles Grant and Don Featherstone of subtracting from the raw dice scores depending upon range, cover and other factors, but without the subtraction.  Instead of subtracting from the scores, you subtract (as it were) from the Die Range.   This has certain advantages.  In a given firefight it involves reduction of one figure instead of from all the dice.  It also means that high dice rolls aren't always the 'good' rolls. 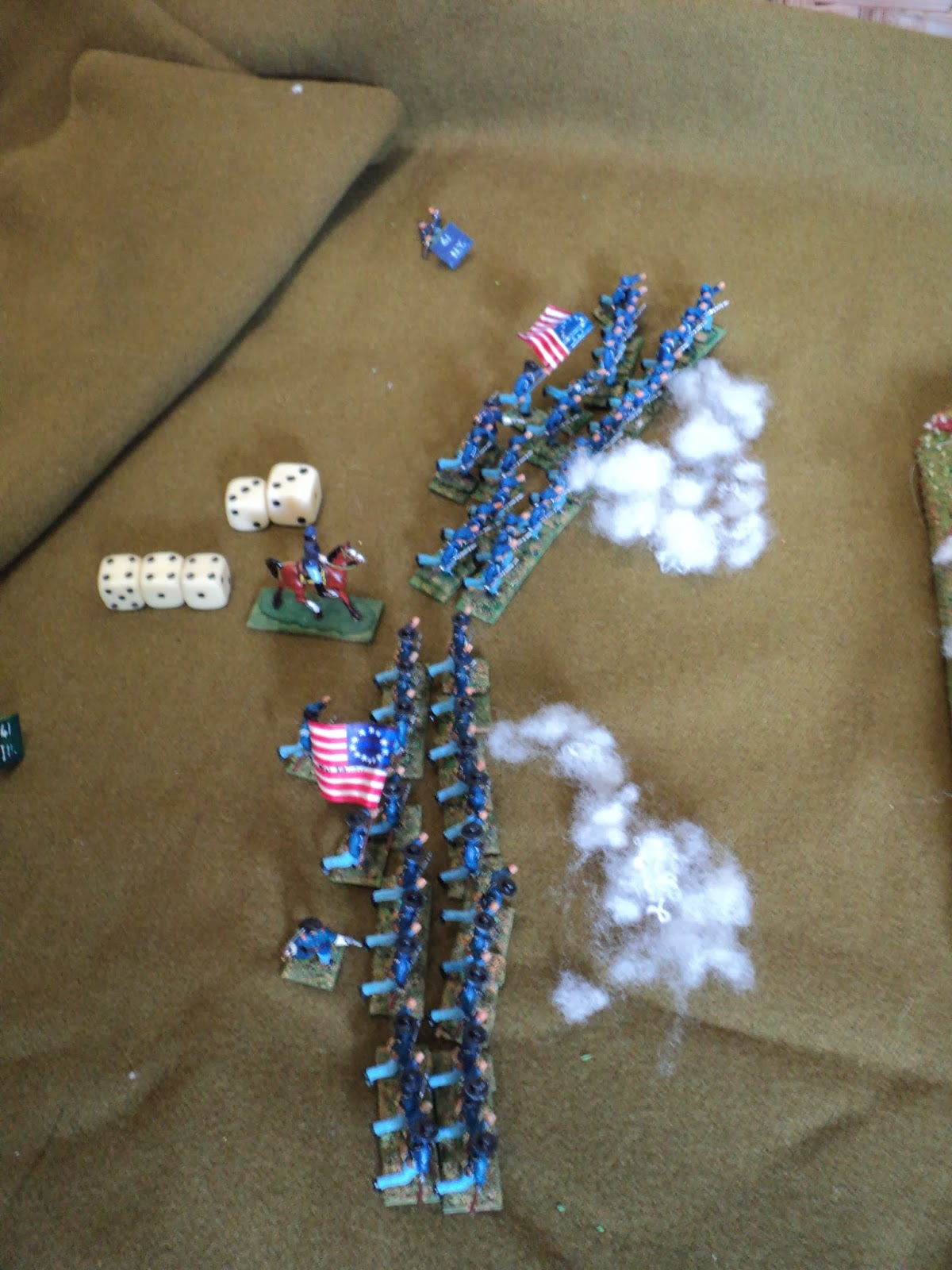 As the Die Range is modified by range and cover, at the outset of the action, the Union regiments came in for some damage long before they were in any position to inflict hurt upon the defenders.  But at such extreme ranges, the attackers didn't receive much damage neither.  However, this was progressively to increase as the range closed, and as the earthwork represented a moderately strong place, the Federals would have to shorten the range to give the defenders anything to think about.  For the purposes of this test, I also ignored morale other than the good old 50% rule (which didn't come into effect anyway).  I just wanted to monitor the outcomes based upon the shooting and (if it came to that) close combat mechanisms alone. 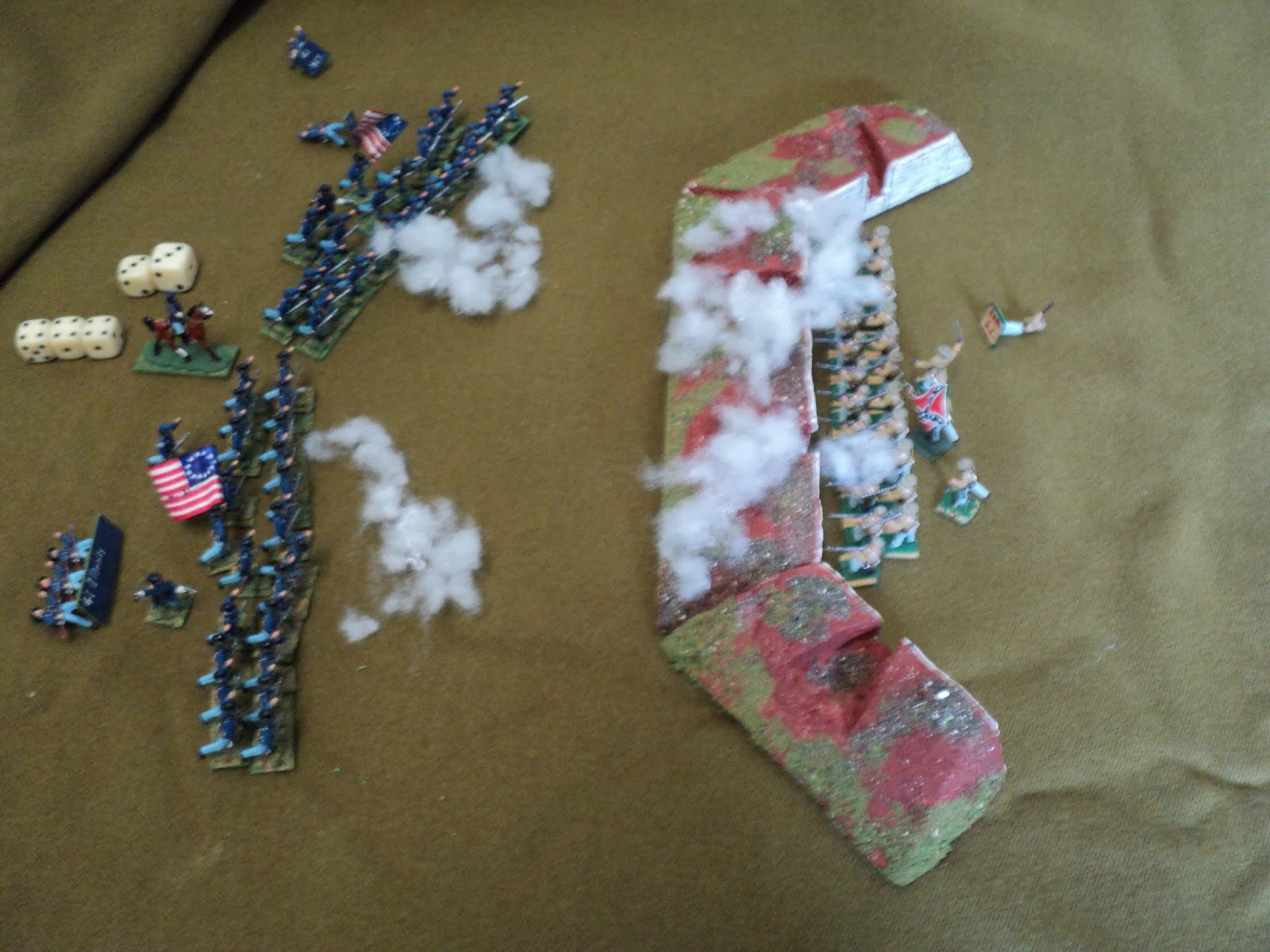 As the range closed to medium distance, the Union were in a position to give back a little of the hurt they were taking.  The Die Range system has effects rather different from progressive halving for range, cover, etc.  Even within ranges in which the attackers could fire with effect, the rate at which they can do so, as a ratio the the defenders' effect is quite low, though it increases as the range shortens.  Furthermore, combat is adjudicated by target, so that the effectiveness of the attackers' fire is combined before adjudication (converting 'hits' to casualties), rather than each adjudicated separately.  With my rule set, this would make a difference. 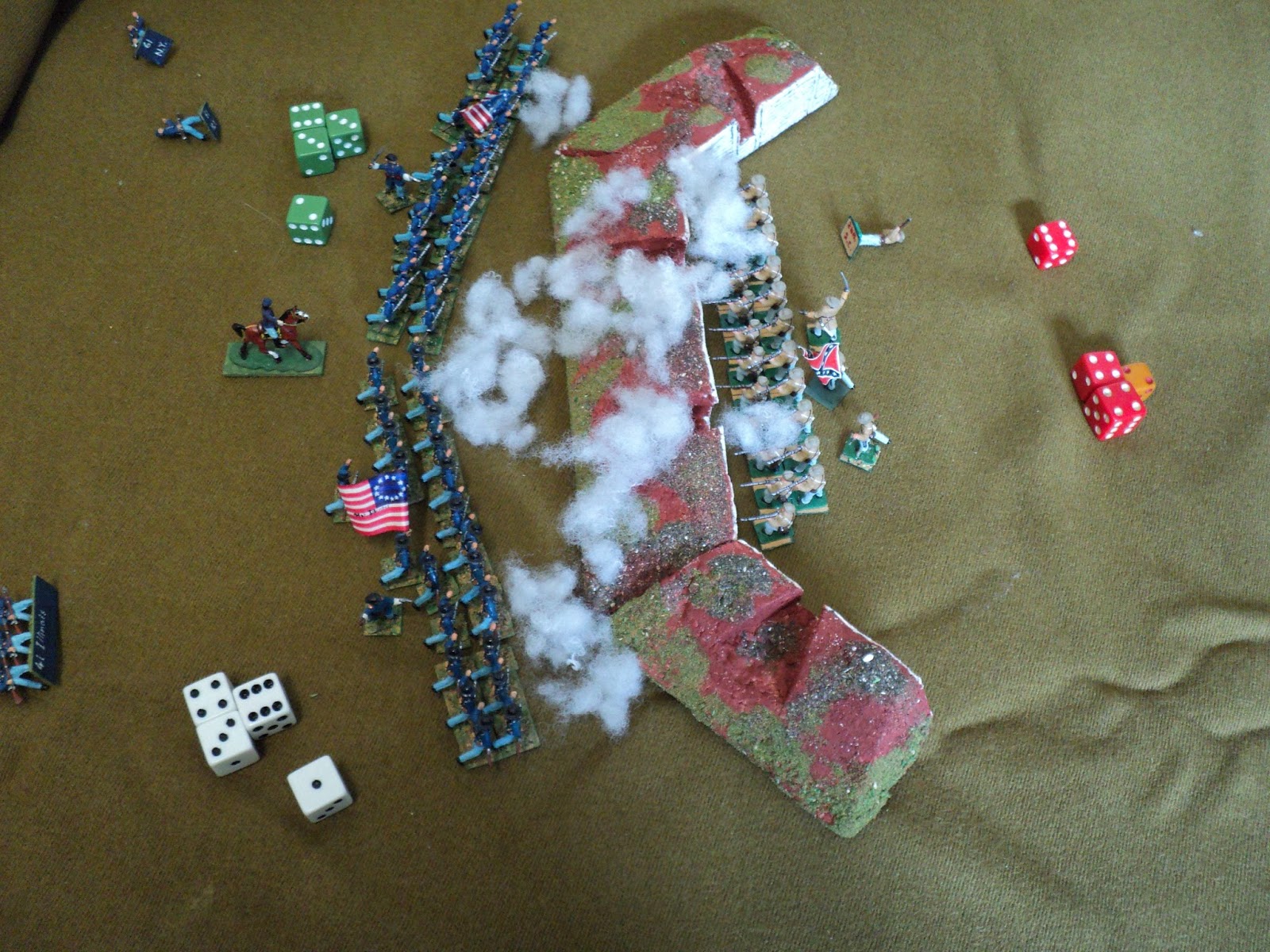 In the above picture, the difference in fire effectiveness afforded by cover is readily apparent.  Here, the Confederates shoot very well - somewhat more hits being achieved than expectation (the odd coloured die represents a reduced volley group).  The Union might well have been disappointed with their shooting - 1 hit fewer than they might have hoped for.  But here's a thing.  Fewer hits in my system means that a higher proportion of them will result in casualties.  Here, the CSA's 8 hits lead to 5 Union soldiers lost; the USA's 3 hits yield... 3 casualties for the CSA!   I call these 'casualties' though it really means that their are three fewer figures remaining with the colors, what ever their actual fate. 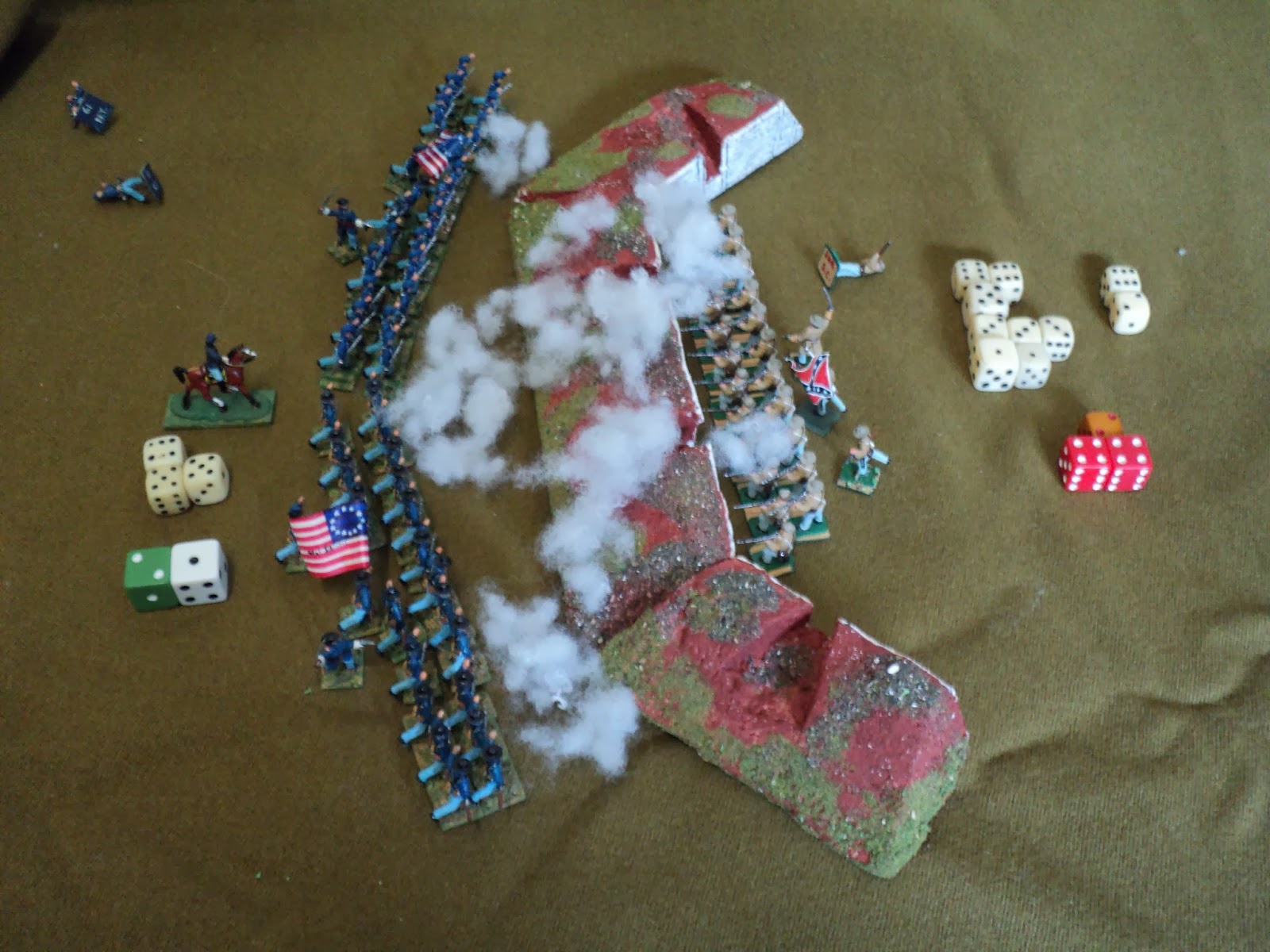 At last the attackers swarm over the earthwork in wild thrust of bayonet and swing of butt.  The defenders get a slight edge on account of the obstacle to the attackers.

Both sides fought hard and well in the melee across the works, The CSA scored a very good 7 hits (E=5) and the USA even better with 10 (E=6) (the E values would have been the statistically average result).  The curious outcome, however, was that the CSA 7 hits yielded a loss to the USA of just 3 figures.  The yield for the USA was not much better.  Ten hits, divided into 8 plus 2, gave just 3 plus 1 = 4 figures lost to the CSA. This was not enough to win the win the melee - a 50% margin being the least required.  However, the number of sixes rolled for the CSA casualties would have obliterated pretty much the regimental HQ. 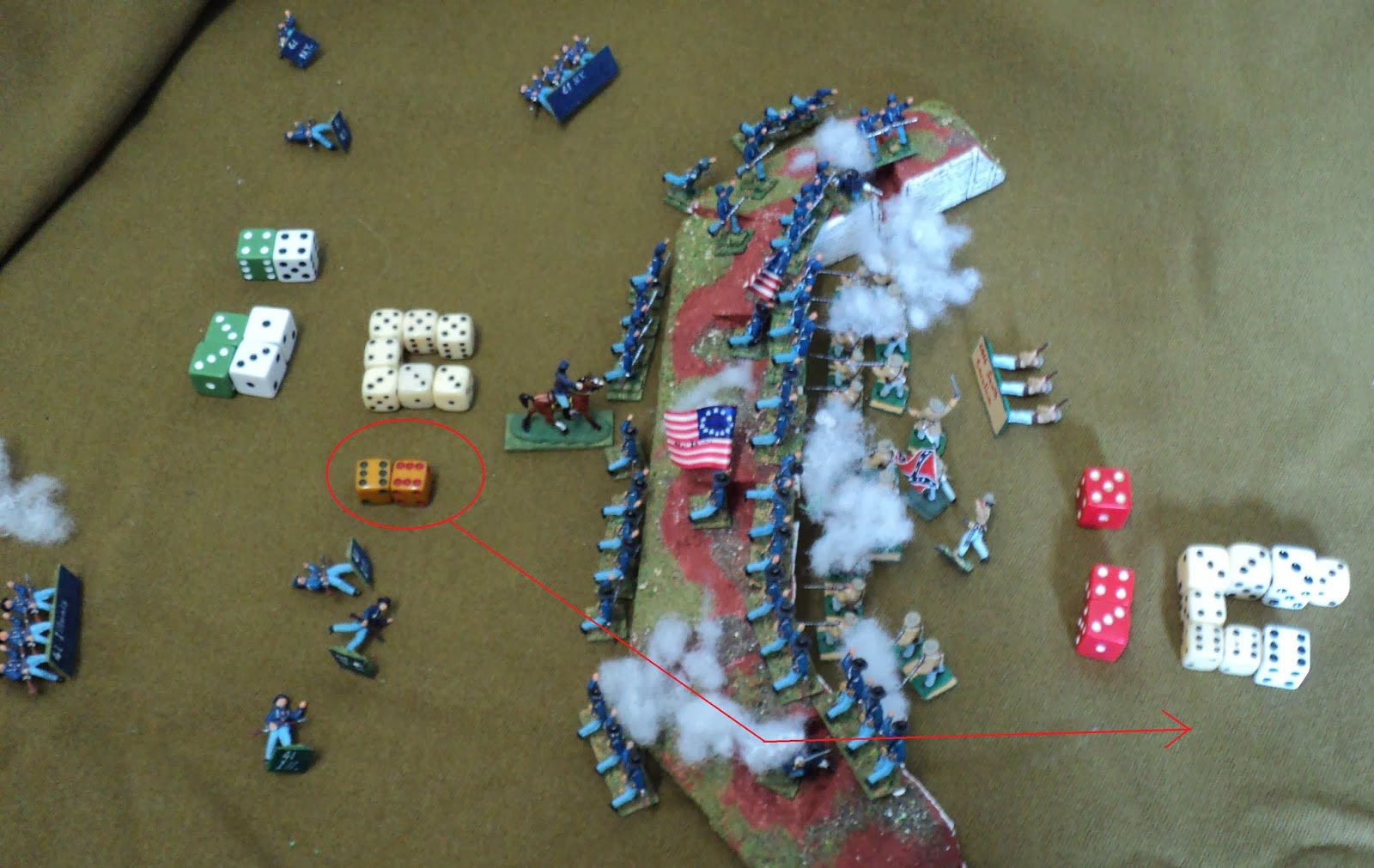 At this point I ended the playtest, the Union having just barely - and perhaps rather unluckily - failed to carry the position, with losses of 14 figures from the 54 sent into the action.  It's grim defence cost the Confederates 7 figures,  two of which were from their three HQ figures.  A morale check at this point would have been interesting - the Union probably falling back in good order from the position (having failed to carry it, but probably prepared to give it another try), and the Confederates a chance of abandoning the position they successfully defended.  The latter's losses and attrition of officers represented possibly enough of a shock to their collective morale to lead to some sort of retrograde move. 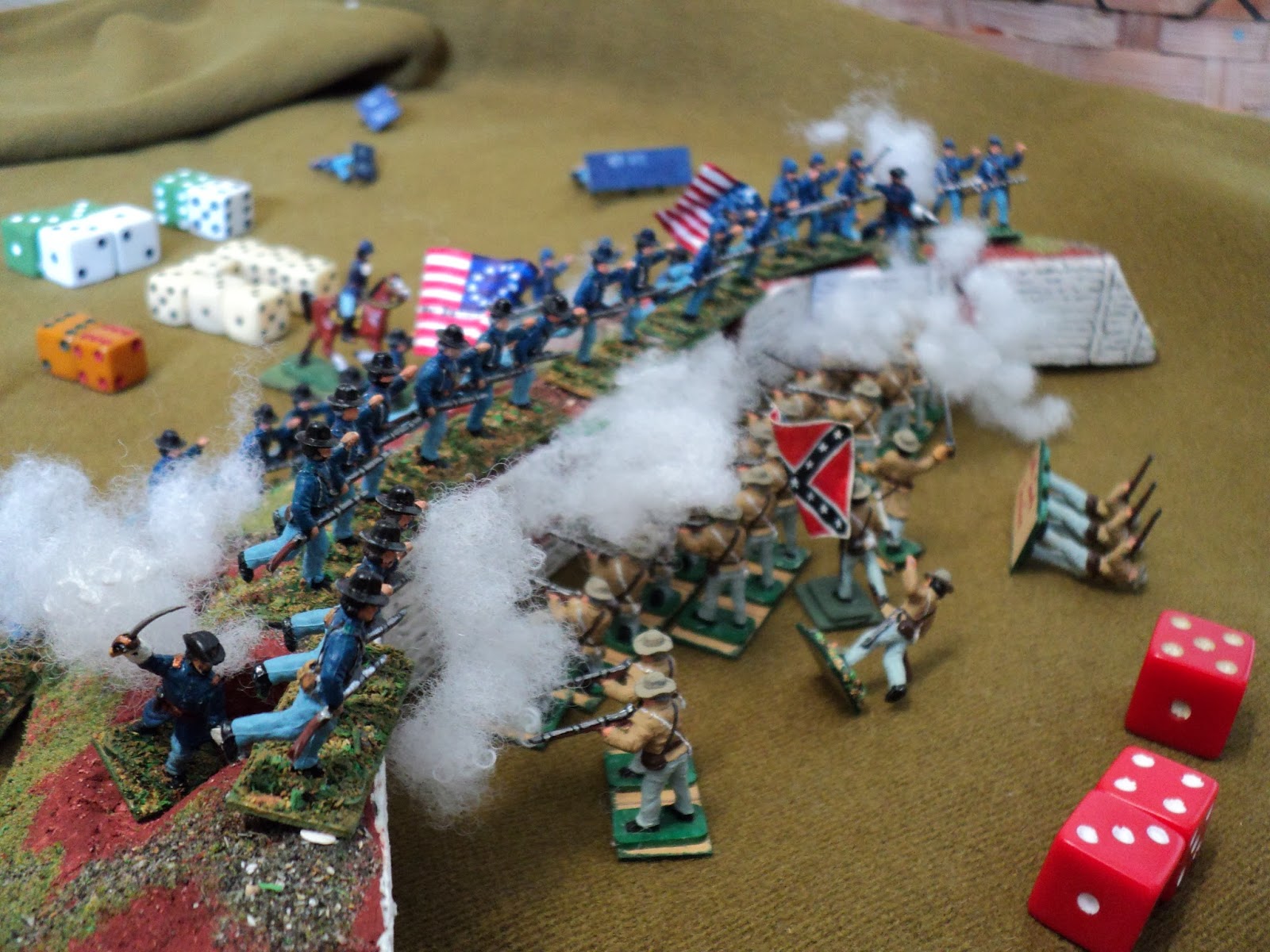 It was interesting to contrast this experience with the 30YW Pike and Shotte play test of a few weeks ago. This one went with a swing, but I am very much accustomed to my own play system.  Morale checks taken throughout would have added extra time to this one, but the odds were slightly in favour of both Union regiments would have pushing the attack home.  The actual result would have meant that more than likely the advent of a third, fresh unit would have been in a position to seize a work defended, or even abandoned,  by the undefeated but weakened defenders.
Posted by Archduke Piccolo at 11:55 PM

Email ThisBlogThis!Share to TwitterShare to FacebookShare to Pinterest
Labels: 19th Century, Game systems, The War Between the States