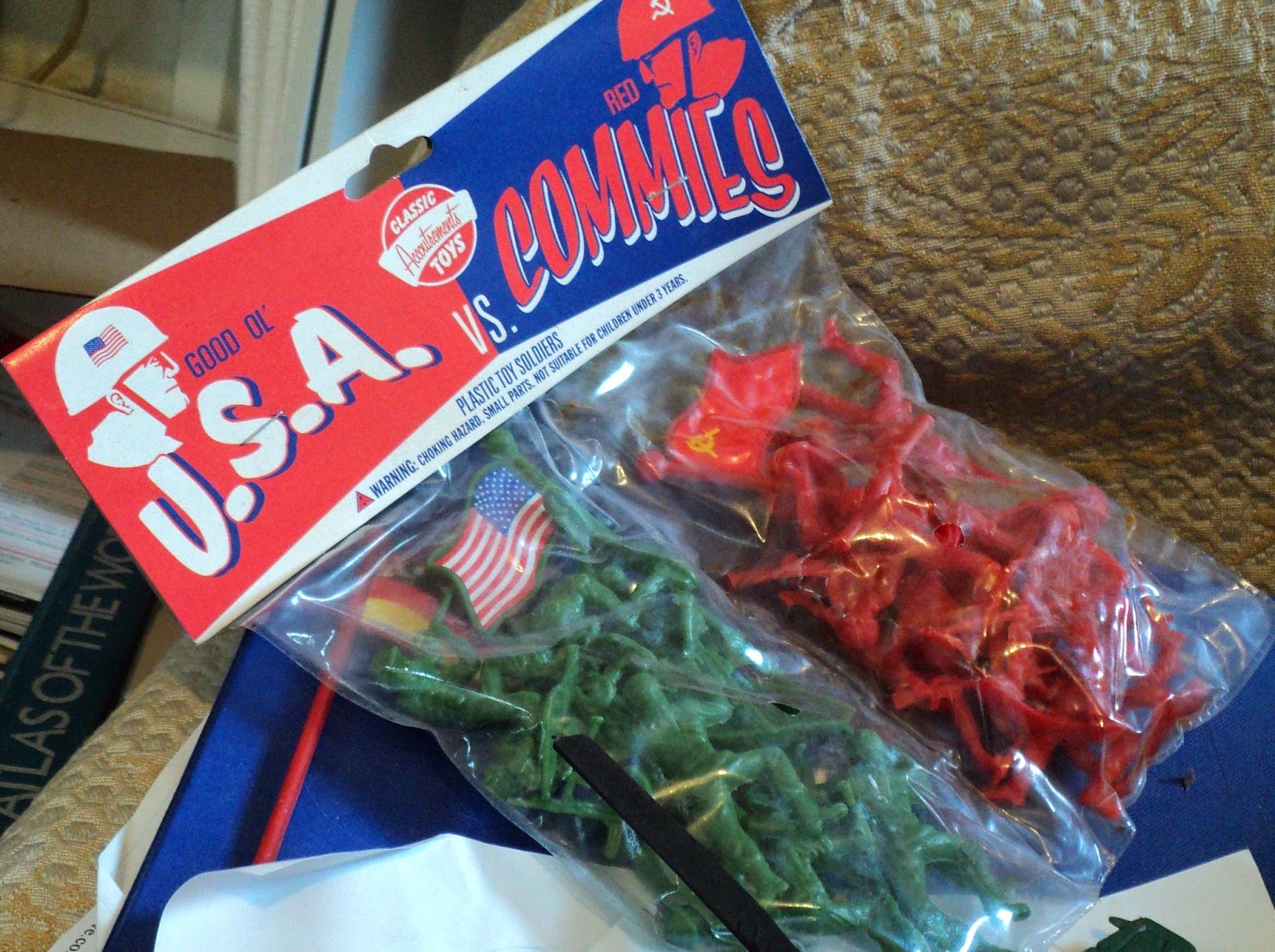 Among a haul of Army Men type soldiery I was given late last year was a pack under the banner of this posting's title.  You might recollect the pic from my posting at that time. You would think, wouldn't you, that the Cold War having been more or less over the last 20 years and more, this sort of thing might have limited appeal.  But who knows? 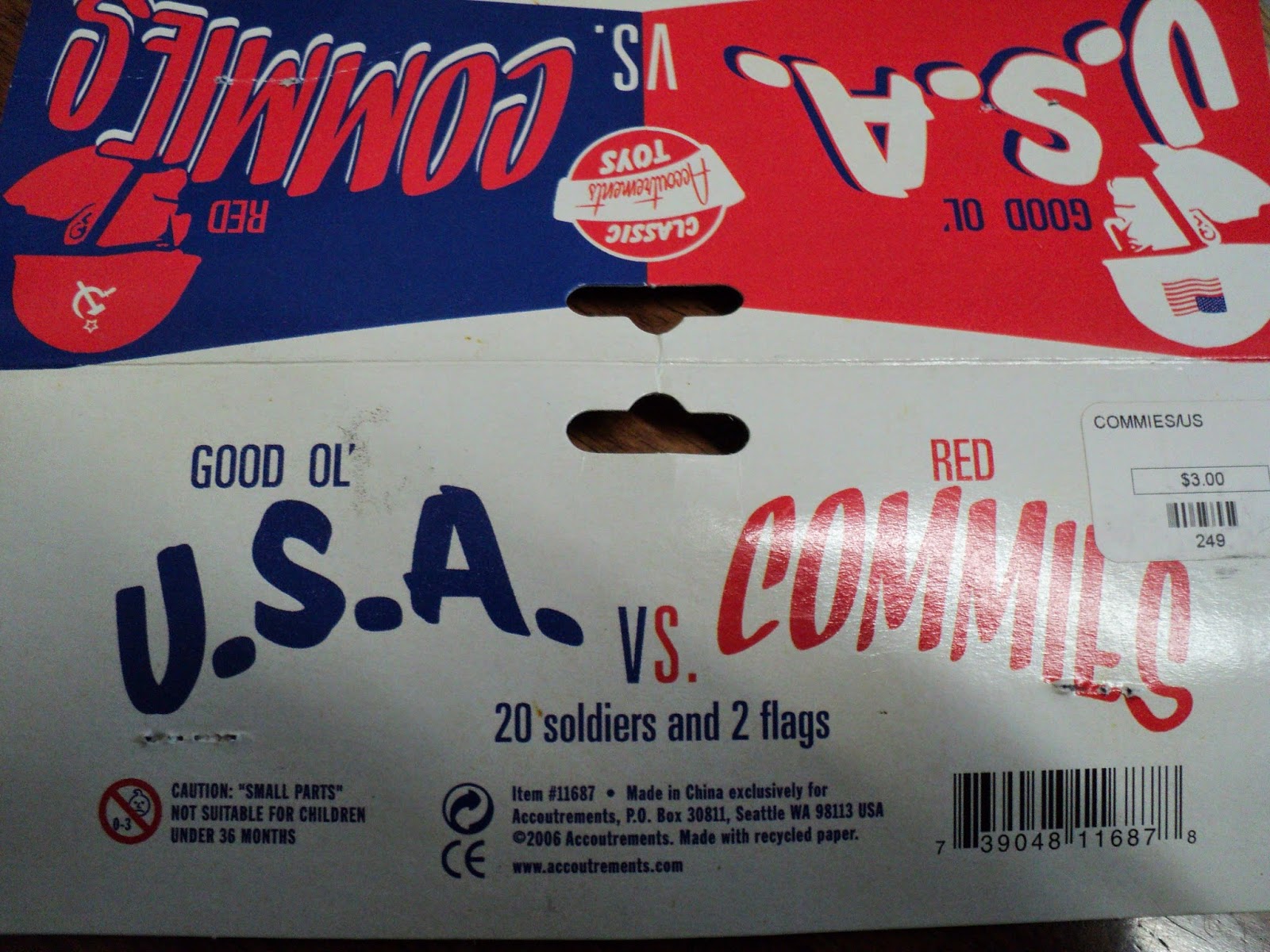 Perhaps the epithet 'Commy' has lost its sting.  A glance at the central small print in the above picture reveals the irony: made in China for a 'Good Ol' USA' company based in Seattle. 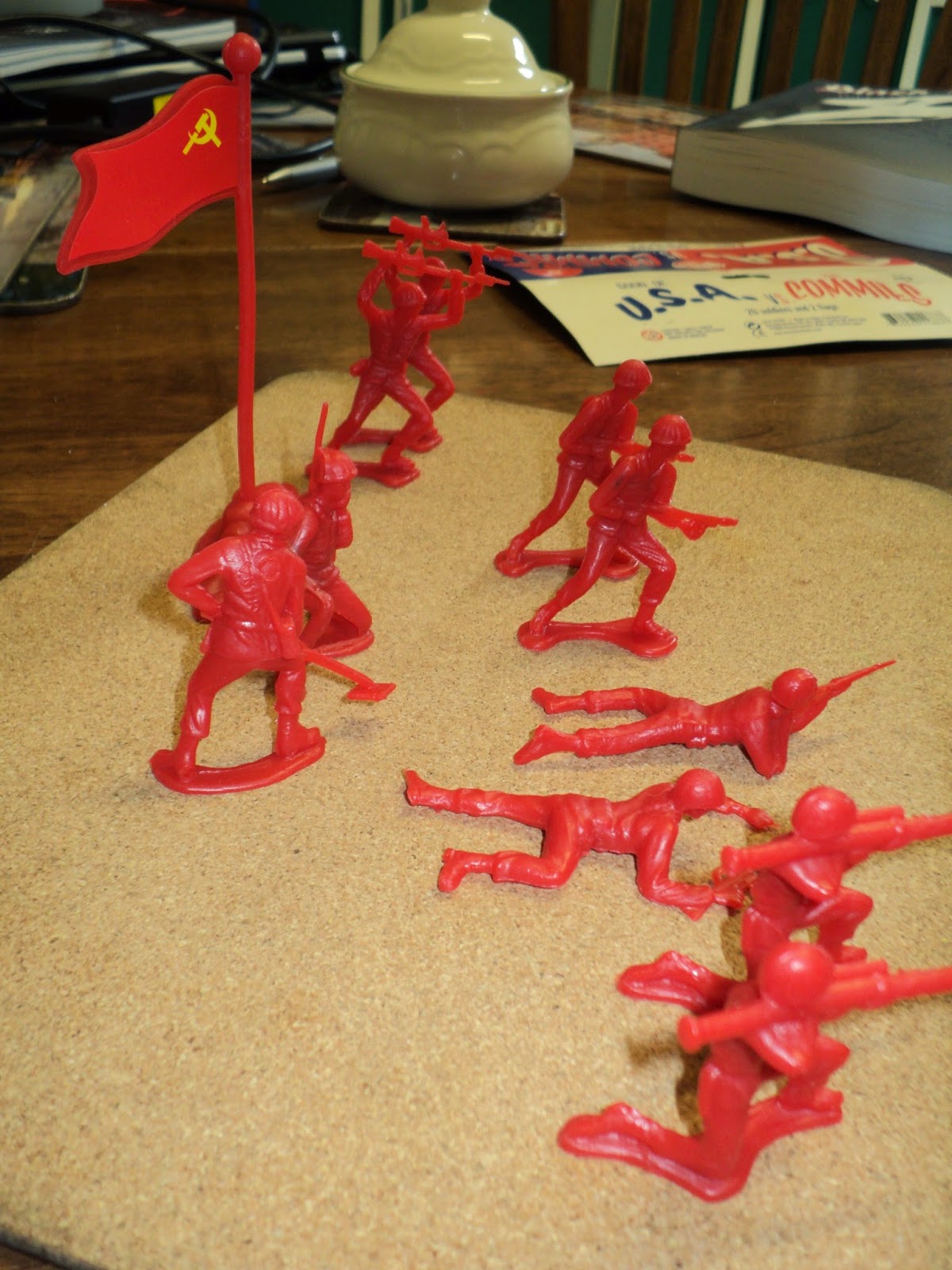 This appealed to my sense of humour so much that I was inclined - as I had plenty of other soldiery to work with - to leave this 'mint in pack.'   Yesterday I overcame that temptation and opened it: one flag and 10 soldiers in each compartment.  Struck by the bold, in-your-face scarletry of the presumably 'Red Commies', I hoiked them out of the bag first.
What emerged were 2 bazooka guys, 2 'about-to-stick-a-bayonet-in-someone's-liver' guys, 2 flamethrower guys, 1 guy prone shooting, 1 other guy prone, not shooting, 1 guy calling for take-out, 1 guy looking for his lost keys.  I admit, I got those last descriptors from here, The 5 Suckiest Army Men, but of course, these last 2 guys are very useful in building up something that resembles an army.  From my point of view - a handy bunch of dudes, though what a 7-year-old would think is a whole other question.  I admit to finding flamethrowers a bit problematical, though.  It's a horror weapon - as one might well guess when it has been observed that few operators of such weapons become POW. 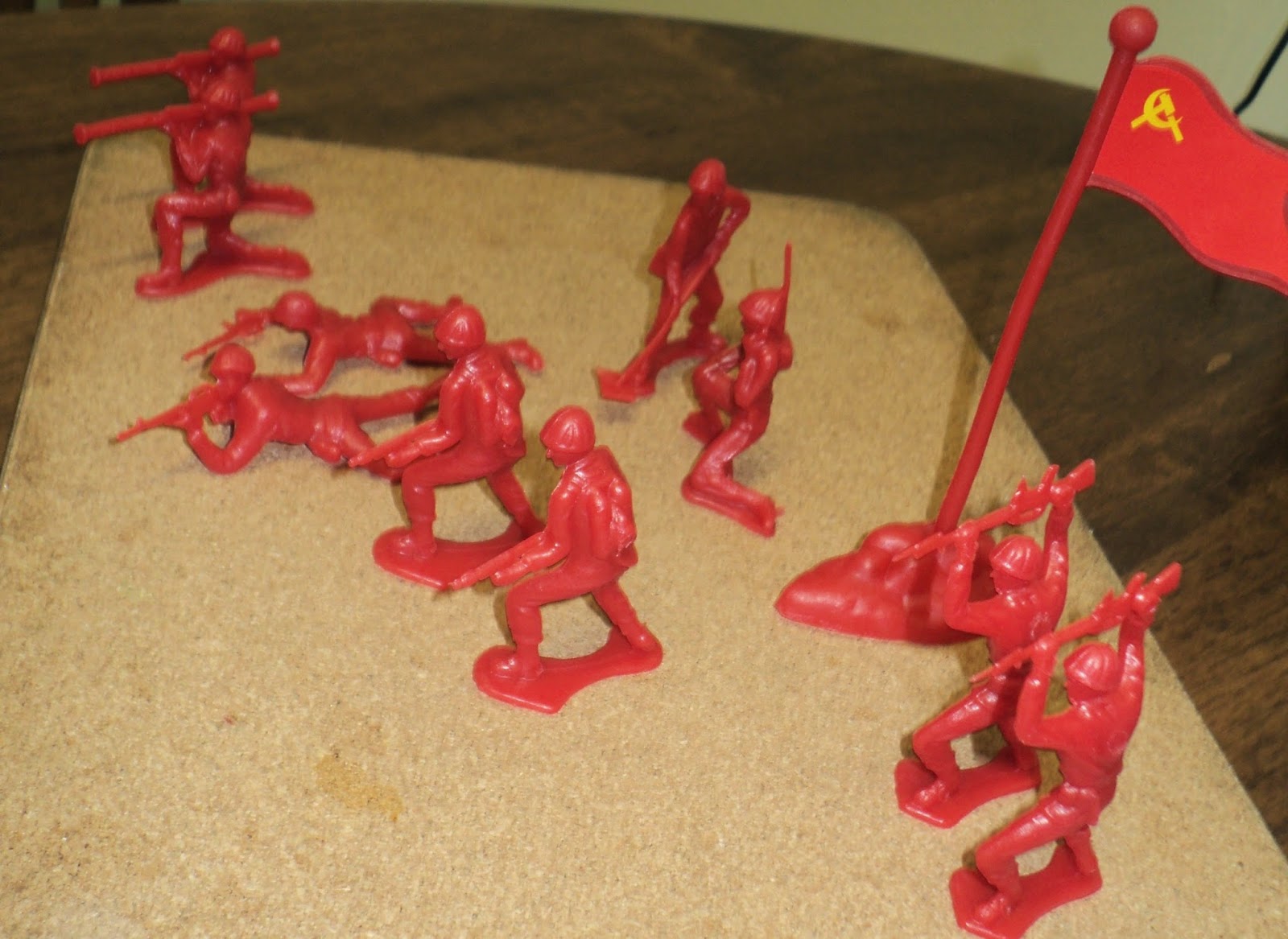 Then out with the green guys: 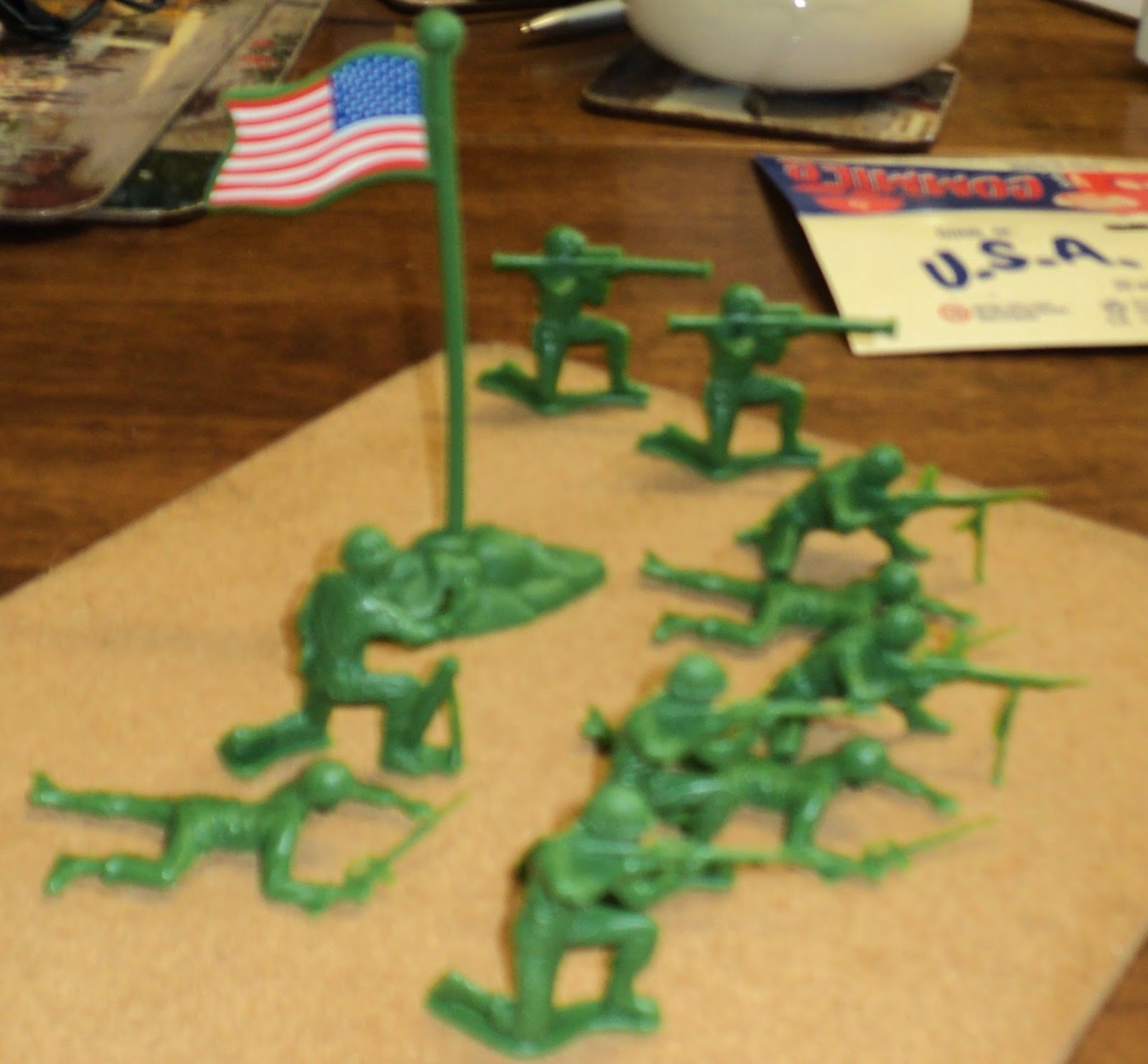 Here the selection is quite different.   You get your 2 bazooka dudes,  3 green fellows crawling about for the 1 red guy, and 2 kneeling firing.  The final three chappies are really handy: 2 light machine gun guys, and a light mortar guy.  Considering this pack is supposed to be of opposing sides, they complement each other quite well. The observant reader might recognise the style of Army Men as that being used (apart from the colours) by Tim Gow's Cold Wars play test.  I'll be keeping the bipods on my LMGs though. 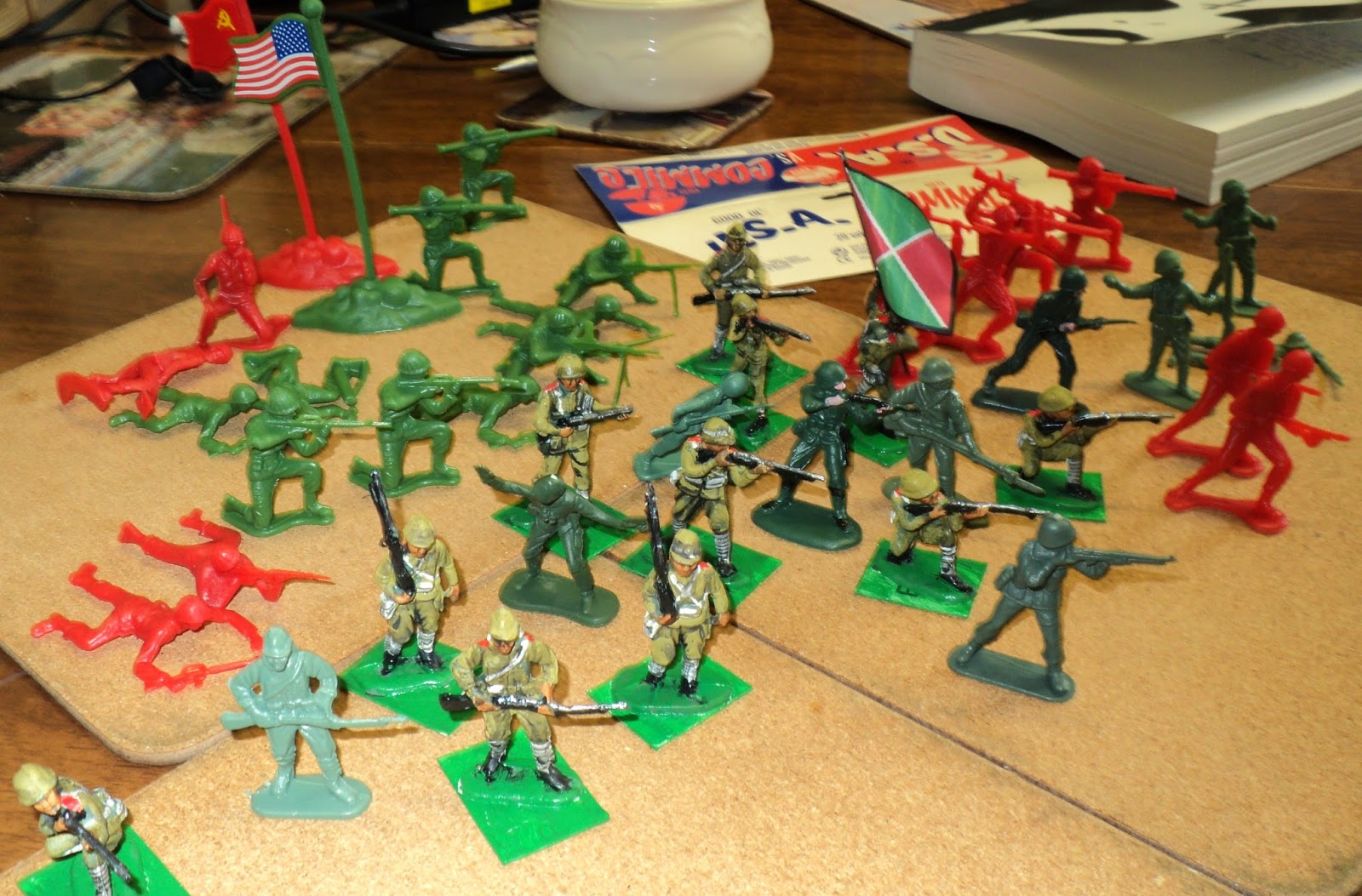 As these figures are too few to represent anything independent, I'll be merging them and several other figures into a company of Omez allies of Raesharn.  The whole group below is just 41 figures all up - rather a smallish company by 'Jono's World' standards, but this will be a fairly well equipped one. 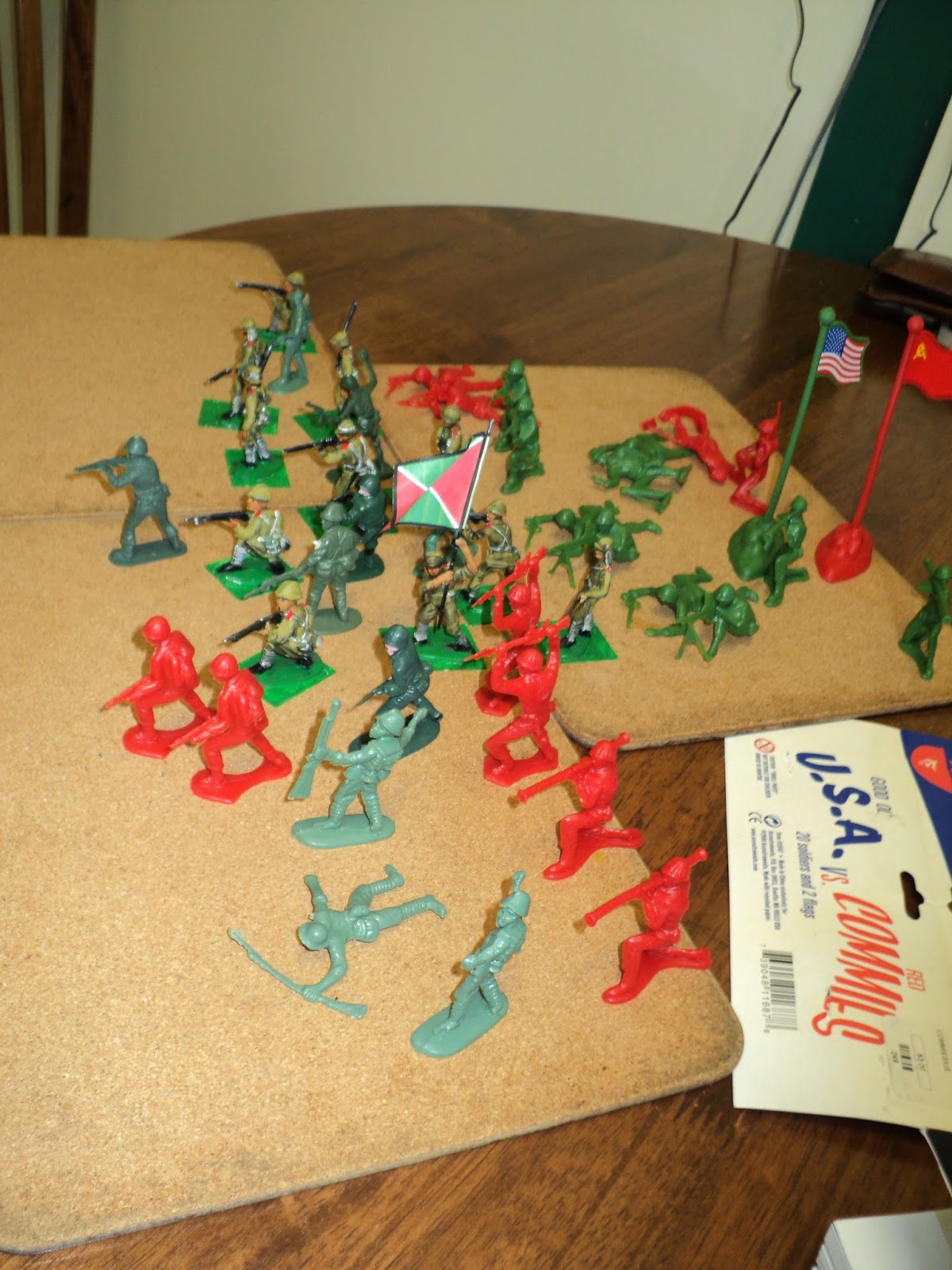 Meanwhile, there are these bunch of British Commonwealth and Australian (?) figures - about 50 of them. 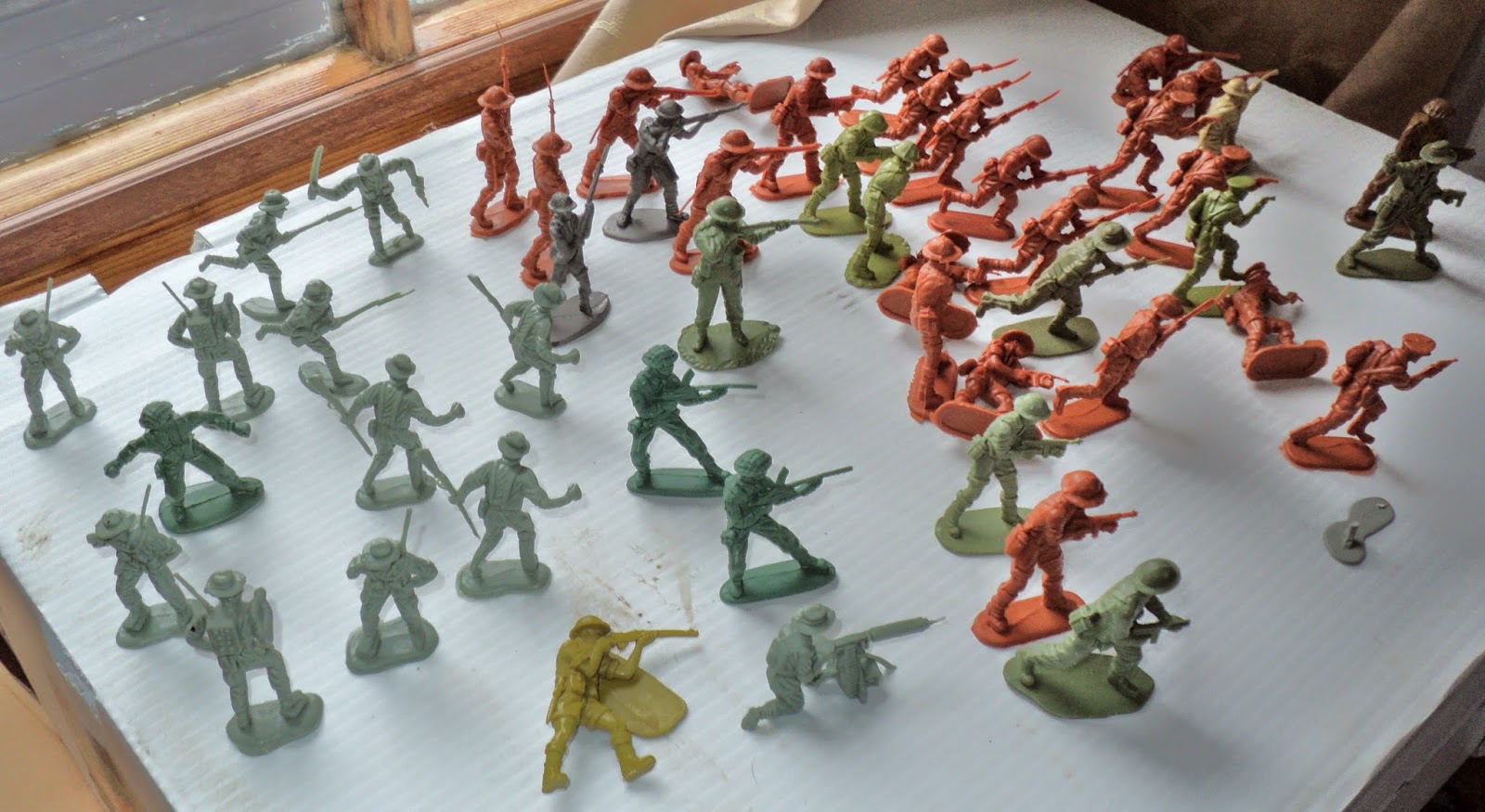 Distinctive as they are from my other figures, they are likely to be pressed into Saabian service as allies of Kiivar.  A trifle over officered, and, judging by the number of (Antipodean)  radio-operator guys, the local catering services are a bit stretched, I am pleased to see at least 2 LMG (Bren) and a MMG (Vickers - Whispering Death).    I may have to add the odd piece of equipment, such as a mortar and maybe one or two anti-tank rifles or launchers...

Posted by Archduke Piccolo at 3:06 PM